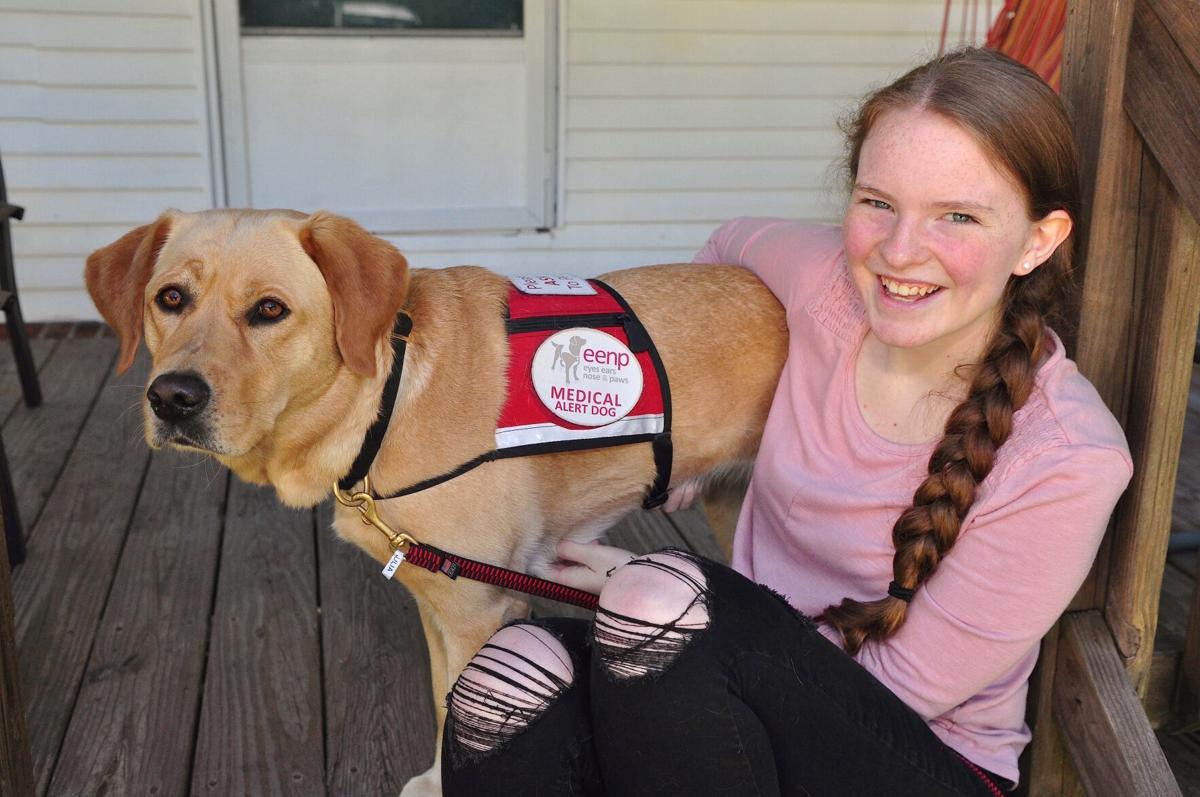 Julia Mickle, 14, of Mill Creek, sits with her medical alert dog Zoe in October. The dog is trained to assist Julia when she has epileptic seizures. (Cheryl Burke photo) 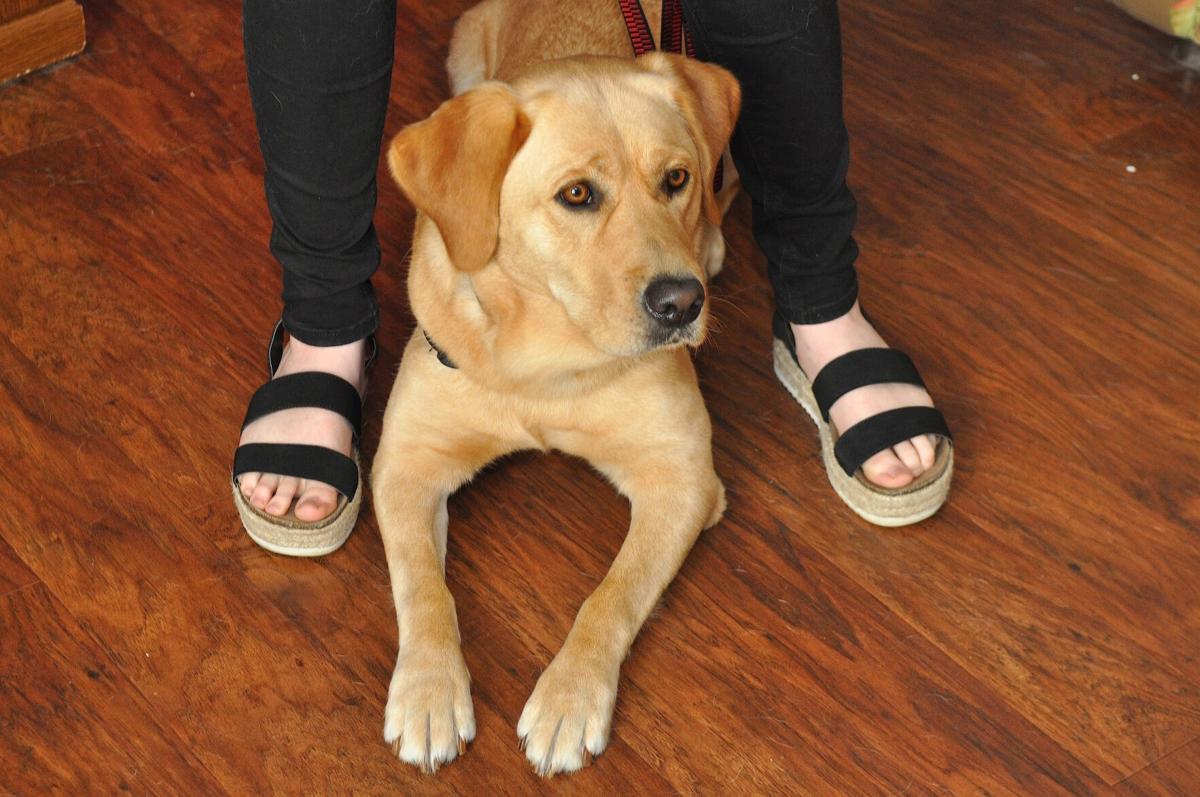 Zoe, a medical alert dog owned by Julia Mickle 14, of Mill Creek, goes through a training session with her owner in October. The service canine is trained to assist Julia when she has seizures. (Cheryl Burke photo) 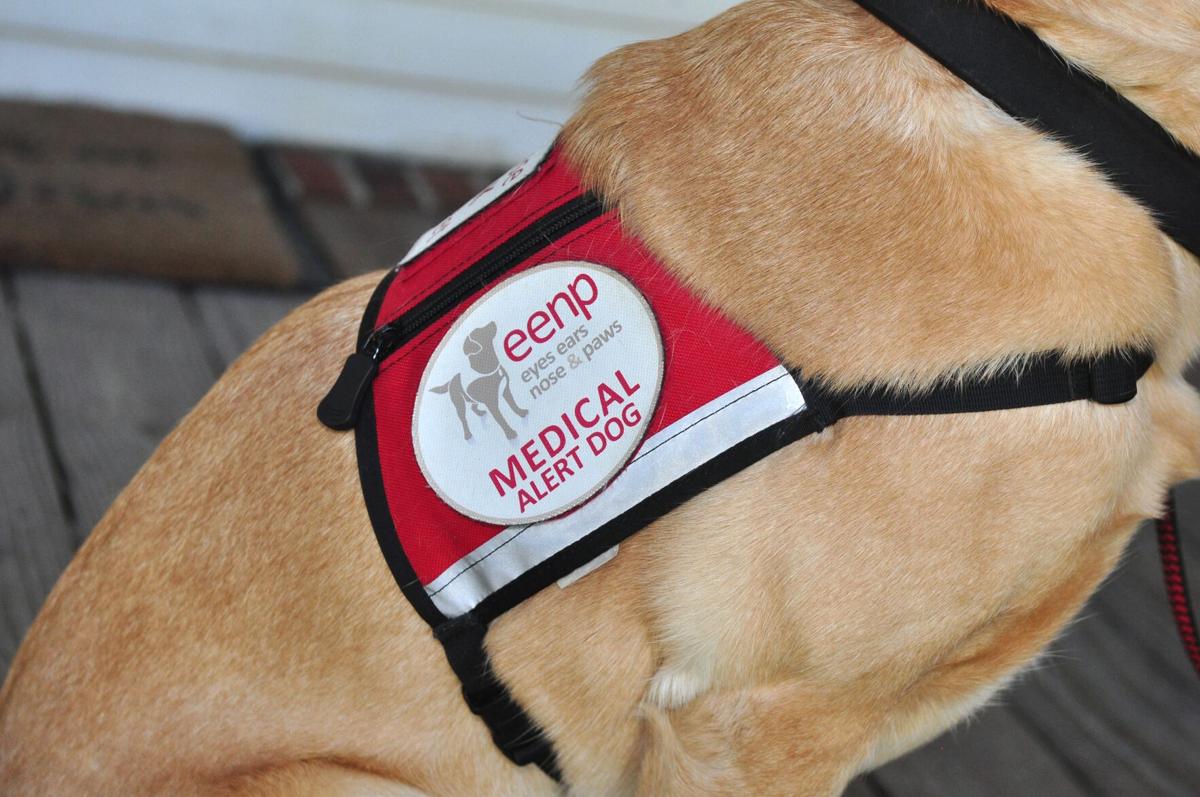 This vest, worn by Zoe, a medical alert dog owned by Julia Mickle 14, of Mill Creek, identifies the canine as a working service dog. The public should never pet a service dog without first asking permission of the owner. (Cheryl Burke photo)

MILL CREEK — When Julia Mickle, 14, was diagnosed with epilepsy in November 2018, she and her parents began a journey of treatment options to control her seizures. Of all the medications, it turns out a dog named Zoe may be the best medicine of all.

Zoe, a 2-year-old yellow Labrador retriever, is a specially trained medical alert dog. The canine is among many trained through Eyes Ears Nose & Paws of Chapel Hill, an organization that trains assistance dogs for people with various illnesses and mobility issues.

Julia said she received Zoe in May after going through a careful screening and matching process at the facility.

“My doctor recommended a service dog,” Julia said. “My mother found EENP and contacted them.”

Julia and her family visited the facility in early spring to meet the dogs preparing to graduate from training. After several more meetings, during which EENP staff observed potential clients and the dogs, Zoe was selected for the teen.

Once the two were matched, EENP staff began intensive training sessions with Julia and Zoe so the teen could learn how to handle the dog and what to expect from her new canine companion.

“When she senses I am about to have a seizure, she nose bumps me to alert me,” Julia said in October. “I can go to a quiet place and she lays on top of me until I come out of the seizure. It helps me relax.”

Zoe is also trained to get help if the seizure is particularly bad.

For Julia, the dog has provided an added sense of security.

“It means the world to me,” she said. “It makes me feel so much safer.”

Her mother, Mandy Thompson, said the dog has provided comfort for her, too.

“It means a whole lot more peace,” Ms. Thompson said. “Before, I was afraid to even let (Julia) go outside without me being with her. It gives me a confidence and peace knowing Zoe is with her.”

Those interested in getting a medical service dog must first get a recommendation from a medical professional. Once that is established, the search can begin.

Trained medical alert dogs can be an expensive undertaking, however. For EENP, the cost of a dog like Zoe is $20,000.

Ms. Thompson said her family qualified for a grant program, which provided 75% of the cost.

“We did fundraising for the remaining cost,” Ms. Thompson said.

While $20,000 seems like a lot, Maria Ikenberry, executive director of EENP, said it costs much more to train the dogs.

“It costs about $50,000 to raise and train a medical assistance dog,” Ms. Ikenberry said.

For EENP medical alert dogs, Ms. Ikenberry said training starts a few days after a puppy is born. Plus, the dogs are specially bred for service.

“We start doing exercises with them a few days after they are born, then at eight weeks they leave the litter and go to a volunteer,” she said. “The primary focus the first three to six months is socialization, basic obedience and house skills.”

After that period, the dogs go to a correction facility, where they are paired with inmates who have been schooled in medical alert training.

“We have numerous experienced trainers in the program,” Ms. Ikenberry said.

The dogs stay in the prison program at least one year. They are removed one week each month so the EENP staff can check the progress of the elite canines.

Once the animals complete that portion of their education, they are placed back with staff members, who complete each dog’s final phase of training until they are matched with a client. Ms. Ikenberry said each dog is carefully matched after the potential owner goes through an application and screening process, which includes interviews and letters of reference.

“If we feel we can make a successful placement, the client is placed on our waiting list,” she said. “Once the client gets near the top of the list, they come in and meet the dogs that are coming up for graduation.”

During the meeting, Ms. Ikenberry said her staff takes videos and observes the interactions between the potential owners and dogs.

“The clients work with the dogs for about two weeks, then we match them. We look for bonding, how the clients play and interact with the dogs. We also watch to see which dog goes to which client,” she said.

After that, Ms. Ikenberry said the next phase is seeing how the matched pair interact during training. If successful, the two graduate as a team. Once the dog goes to its new owner’s home, they continue training over the next year.

Julia said she and Zoe still travel to Chapel Hill for training sessions, and she is expected to continue working on it at home and while she is out and about with her dog. Some of their training sessions in the public have ended up with unexpected results. For example, Zoe is not only trained to detect seizures, but other illnesses like diabetes.

“One time we were out and she actually alerted on a woman who had diabetes and her blood sugar had dropped,” Ms. Thompson said.

Julia carries a special card and Zoe wears a vest that identifies her as a medical alert dog. Julia said it’s important the public and business owners understand the protocol for service dogs.

“We should be allowed in businesses and when she’s out with me she is working,” Julia said. “The public should ask before petting a service dog. Zoe is allowed to have people pet her, but people should ask first.”

Ms. Thompson agreed, pointing out that it’s critical Zoe be focused on her daughter.

“When Julia is having a rough day, Zoe will keep her eyes especially focused on Julia. We know the difference when Zoe is playful and when she is sensing something wrong,” Ms. Thompson said.

She added that if someone sees a medical alert dog by itself and it’s trying to get someone’s attention, follow the dog because it’s trying to alert someone its owner is in distress.

“They’re trained to go for help and have someone follow them back to their owner,” Ms. Thompson said.