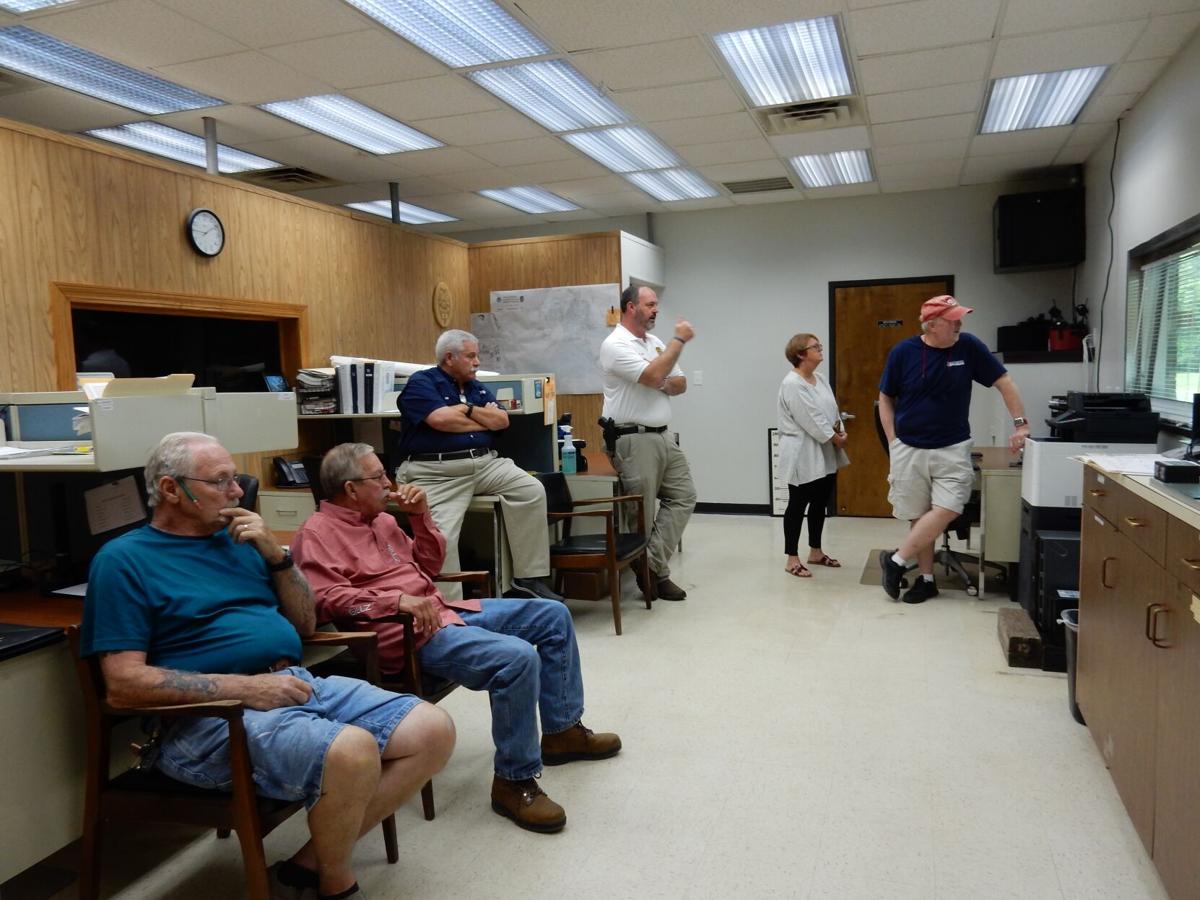 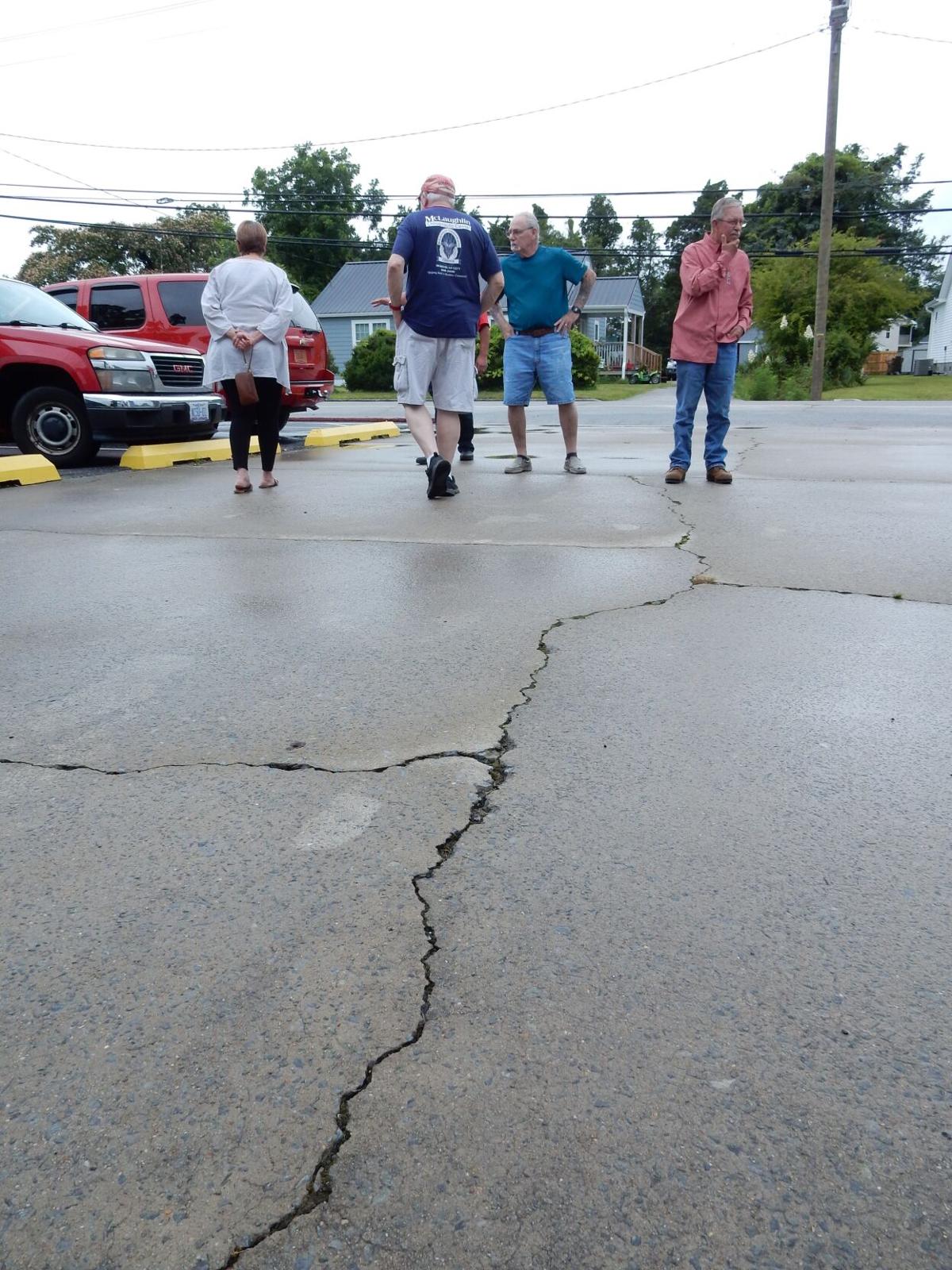 NEWPORT — In an effort to determine and better understand long- and short-term needs, Newport officials are touring the town departments this summer.

The Newport Town Council, with Councilman Mark Eadie absent, held the first of a series of facility tours Friday, visiting the police and fire stations, both on Howard Boulevard. Police Chief Keith Lewis and Fire Chief Ben Whitley showed the council the facilities, pointing out improvement or repair projects recently completed or in the works, and those the chiefs want to undertake at some point.

Chief Lewis said the police station received “a lot of water damage” during Hurricane Florence in September 2018. While the hurricane only registered as a category 1 on the Saffir-Simpson hurricane scale, its size and slow movement resulted in massive amounts of rain and flooding.

The water damage to the station led in significant mold problems, which were subsequently treated by contractors. Further, wall repairs were undertaken by town staff.

“We still have electrical (wiring) that needs to be rerouted and run back up there,” Chief Lewis said, referring to the station attic.

Security improvements are also among the police department’s priorities for the station. Chief Lewis said surveillance equipment is limited, and the department has requested quotes for some upgrades.

The station is a converted bank building constructed in the 1980s, according to the chief. The building’s vault has been turned into evidence storage. Evidence is stored for different lengths of time, depending on the circumstances of a given case, after which it’s either disposed of or confiscated by the department.

“Ideally, this (storage) would be climate controlled,” the chief said.

The station building also has limited office space for the sworn officers. Chief Lewis said he wants to remove the existing separated desks in the area that serves as a squad room and replace them with a combined work area.

While touring the departments, the council brought up the subject of vehicle rotation. The department currently requests vehicle replacements as needed, but councilmen Bob Benedict and David Heath expressed interest in having a regular replacement schedule for the police department.

“I’d like to set it up so we can do this within the budget,” Mr. Benedict said.

Chief Lewis said leasing vehicles could allow them to replace more on a regular basis, but it would mean the department would have regular vehicle expenses in its budget.

Meanwhile, down the road at the fire station, Chief Whitley voiced his concerns about the facility’s front driveway. The pavement has developed large cracks from the engines and ambulances coming and going, and similar cracking has developed in the asphalt parking areas surrounding the sides and rear of the station, too.

The chief also pointed out where the wood on some of the station’s bay doorframes is coming loose and needs replacing. He said they have a state safety inspection scheduled for the department’s training facility, which is frequently used by Carteret Community College.

Much like at the police station, the firehouse has an issue with a lack of space. Chief Whitley said over the years, various rooms in the station have been reworked and repurposed.

“It’s gotten to the point if we have to add anything, something has to go,” he said.

The chief also said that the building is so old and out-of-compliance with current building regulations, if they begin renovating, they may end up having to bring the entire building up to code.

Town officials have discussed the possibility of building new police and fire stations in recent years. As a result, Chief Whitley said he’s reluctant to request extensive improvement or repairs.

However, Mr. Heath said some items, such as replacement equipment, can be transferred from the existing fire station to a new one. He also said improvements to the existing station wouldn’t go to waste because they’d find a new use for the existing building.

“If we built a new station, we’d still want to repurpose this building,” he said.

Mr. Eadie has previously suggested building a combined fire and police station. This is a setup Pine Knoll Shores officials have adopted with their public safety building and which Atlantic Beach is planning to adopt with the public safety and administration complex that town is constructing.

Opinions on this option seem mixed, however.

Mr. Benedict said he’s not in favor of having a combined station building due to departments having different needs. Mr. Heath, however, liked the idea.

“It’s just more economic to build one building instead of two,” he said. “I just think it’s an option that should be economically explored.”

According to Mayor Dennis Barber, a major project like a new station isn’t going to happen soon.

“We’re not at the point now to make any decisions until we know more about the growth of Newport,” he said. “Right now, we need to take care of what we’ve got and wait for the intersection of Interstate 42. That will make a difference.”