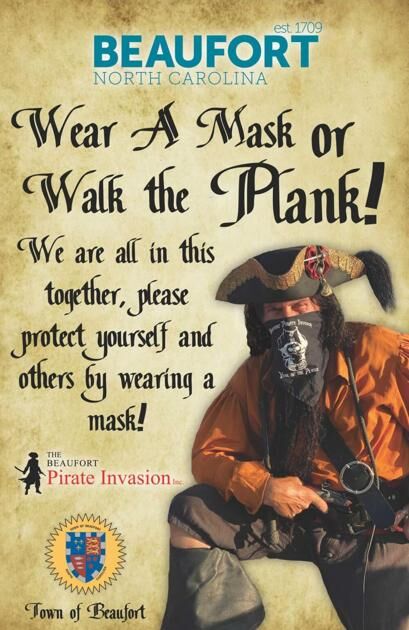 During the statewide mask mandate, which was in effect through the end of July, the Beaufort Pirate Invasion partnered with the town on these signs, encouraging mask-wearing in public. Monday, the Beaufort Board of Commissioners issued a new, local mask mandate in the face of increasing numbers of COVID-19 cases in Carteret County. (Contributed graphic) 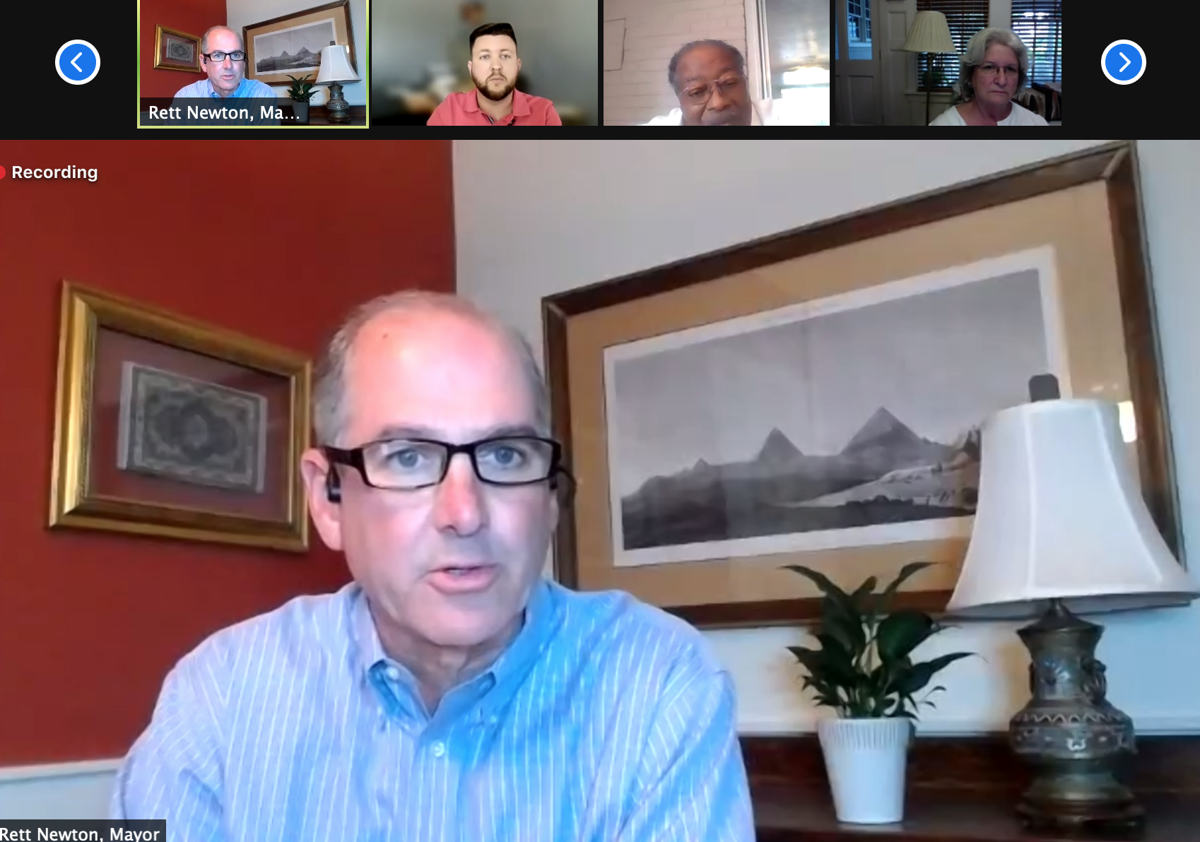 BEAUFORT — The town of Beaufort will join other North Carolina municipalities in mandating mask-wearing in public spaces beginning Tuesday.

The Beaufort Board of Commissioners voted unanimously Monday to approve a mask mandate, which would require individuals to wear a face covering in public buildings within the corporate limits of Beaufort, including area establishments and businesses open to the public.

“We’re currently at a 16 percent transmission rate, and to put that into perspective, we should be as low as 5 percent,” Commissioner Sharon Harker, a licensed respiratory therapist, noted. “And we do have some things in our toolbox that we can use to mitigate the spread and I think it’s responsible for us to look at this. Wearing a mask is one of them, vaccine is another.”

The vote came during the board’s regular work session, held virtually via Zoom.

Beaufort is the first municipality in Carteret County to issue a mask mandate, though other city, town and county governments have done so in recent weeks as COVID-19 cases continue to spike with the spread of the highly contagious delta variant. During the previous peak in cases this winter, all areas were under a statewide mask mandate issued by Gov. Roy Cooper. That directive expired at the end of July.

In a resolution drafted by the town’s attorney in support of the mask mandate, Beaufort said the mandate “is designed to mitigate and slow the spread of COVID-19 within the Town.”

Exemptions to the mandate include those who are under five years of age, those who have a medical or behavioral reason not to wear a mask, those actively eating or drinking and more.

“I think a mask mandate for inside buildings … right now is a good time for it,” Commissioner Ann Carter noted.

The ordinance adopted Monday remains in effect through Friday, Dec. 31, but at the request of Commissioner John Hagle, the board will reconsider the matter at each commission meeting.

In addition to the mandate, commissioners also opted to tie an extension of the town’s emergency paid sick leave for employees to vaccination status.

The policy was initially adopted in January to extend up to 80 hours of additional leave to employees who needed sick leave after contracting COVID-19 or to care for a family member who contracted the virus. It expired June 30.

Monday, human resources officer Barbara Cooper requested the board extend the policy through Dec. 31, with a retroactive application to July 1 to cover “the increase (in cases) that we have had with our employees.”

Tuesday, Beaufort staff told the News-Times two employees were currently out on quarantine.

Rather than a blanket extension to all town employees, commissioners opted to only extend the leave for employees who have been vaccinated.

“If you want to participate in the emergency sick leave, you need to go ahead and be vaccinated,” Commissioner Marianna Hollinshed said.

Ms. Cooper said there is a “large group” of town employees that are unvaccinated.

Though Ms. Harker initially hesitated on the measure that would tie the leave to vaccination status, she joined the rest of the board in unanimously supporting the measure.

In an email following the meeting, Ms. Harker said she wanted to ensure staff could have the time off they needed despite vaccination status and changed course once she confirmed unvaccinated employees could still take traditional accumulated sick leave.

The move comes the same day the U.S. Food and Drug Administration gave full approval to Pfizer’s COVID-19 vaccine. Moderna has applied for the full approval for its vaccine as well, and Johnson & Johnson has said it will do so later this year. All three varieties of the vaccine are being administered under emergency provision.

In other pandemic-related business the board, by consensus, opted to keep Beaufort board meetings virtual for the time being. The commissioners have been assessing a return to in-person meetings semimonthly.

In the meantime, commissioners authorized staff to move forward with a technology upgrade to the town train depot — the site of most board meetings and located at the corner of Broad and Pollock streets — to accommodate hybrid meeting.

The equipment to allow the meetings to proceed under the hybrid model will cost $19,582, according to town clerk Allen Coleman, to be paid for with federal recovery funds.

Finally, the board consented to allow the Beaufort Harbor and Waterways Master Plan Advisory Committee to meet using the hybrid model at the Beaufort Hotel off Lennoxville Road. During a meeting Thursday, that panel had requested the commissioners allow them to meet at the equipped hotel to better examine maps and other materials.

Reporter's note: This article was last updated at 11:06 a.m. Tuesday, Aug. 24, 2021, to include a count of town employees currently out on quarantine.

Not surprised considering they did their little Nazi checkpoint last year. Glad you can say the magic words "medical reason" though (probably had to put that in to avoid running afoul of ADA.)

How long before the town board can be voted out? They almost bankrupted Beaufort businesses before and will try and finish the job this time. Please vote the mayor out and his suppoters.

We don't need to give the message to high risk people that masks make them safe. They don't if we intend to follow the science. Following the sheep isn't a good thing.

“ We don't need to give the message to high risk people that masks make them safe.”……Say what?

Lol. The real sheeple in this whole mask / vaccine story are obviously those that ignore what is right for America and fly the flag of a person, not the American flag. Yes, they fly the flag of a demented leader. That leader may someday be called the man that ruined the world.

Those followers have put this one mentally ill person above America. He has split our nation more than any other. It is impossible to say that these followers are not the ultimate sheeple. He has infected millions of Americans with his own sickness. Please sheeple he is not a good person. He is not a Christian in any way.

His denial of this virus and how it his sheeple have looked at it has helped kill many people and they have allowed this virus to return to where it once was. If a person fails to get the vaccine because of the lies he spread, the blood is on his hands.

These facts I stated define his flag flying define sheeple. He will be the man that ruined the world. Be a real stars and stripe Flying American. Not a person that fly’s the flag with a persons picture or name on it, that is not right. Quit being the ultimate sheeple.

Well done by the Beaufort council.

We continue to wallow in this mess because of wilful ignorance on the part of mask-scoffers and anti-vaxxers.

Masks do work toward preventing the spread.

"We recommend that public officials and governments strongly encourage the use of widespread face masks in public, including the use of appropriate regulation."

and a couple of more, for good measure:

Oregon and Hawaii have both maintained draconian mask mandates for well over a year, and both are currently experiencing record rates of infection. This new mandate specific to Beaufort will only serve to further undermine recovery of the local economy, as most recognize this for what it is and will choose to drive across the bridge to Morehead to shop and dine. As we all navigate around the pot holes and patches on our trips to Morehead for the rest of this year, I hope everyone will consider the reasons why the extra drive is necessary and subsequently reach the conclusion that none of the current board deserve to be re-elected. Beaufort deserves better.

You do include the various unions and other Leftists in your criticism don't you?

Seems a bit discriminatory and Orwellian to specifically exclude employees from a declared benefit based specifically on their vaccination status. If allowed to stand, where does this stop? Are BMI, tobacco use, doughnuts or whatever other vices not approved by the town next? Might be interesting to see if that stands up in court if someone decides to push back.

Disagreement is fine but using this space to endlessly mock other people and differing news outlets, calling them names and accusing them of being in a cult is against our terms of service.

Not mocking or calling names but what the heck does flying a flag have to do with anything ? See flags of all types on folks front porches all the time .

Exactly right. Flags are free protected speech and have no connection to disease control. Do they? You , the editor, owe Mr Collins an apology.