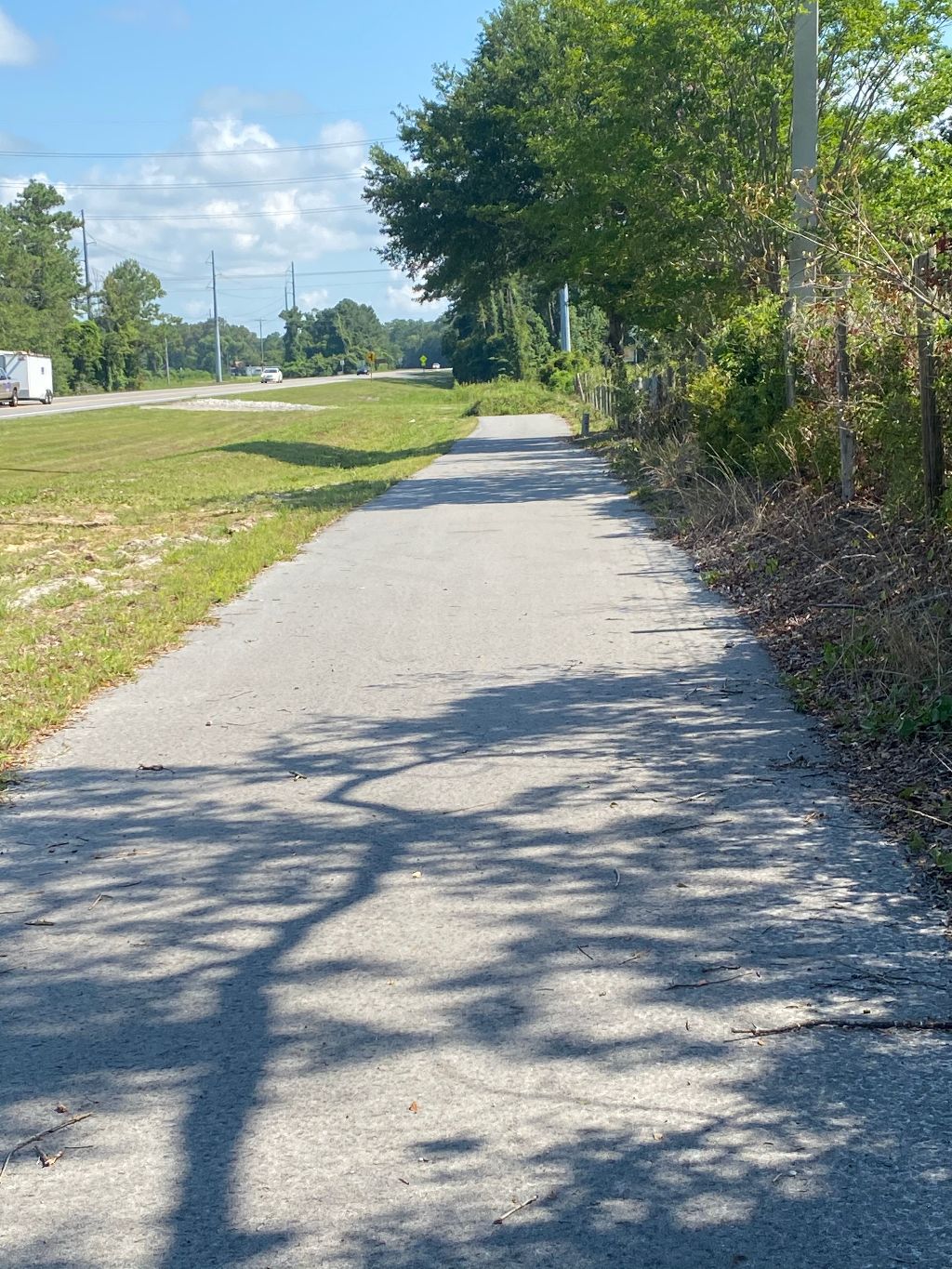 The section of the Cape Carteret Trail along Highway 58 runs past the Mac Daddy's entertainment complex, but doesn't connect to any other sections. (Brad Rich photo) 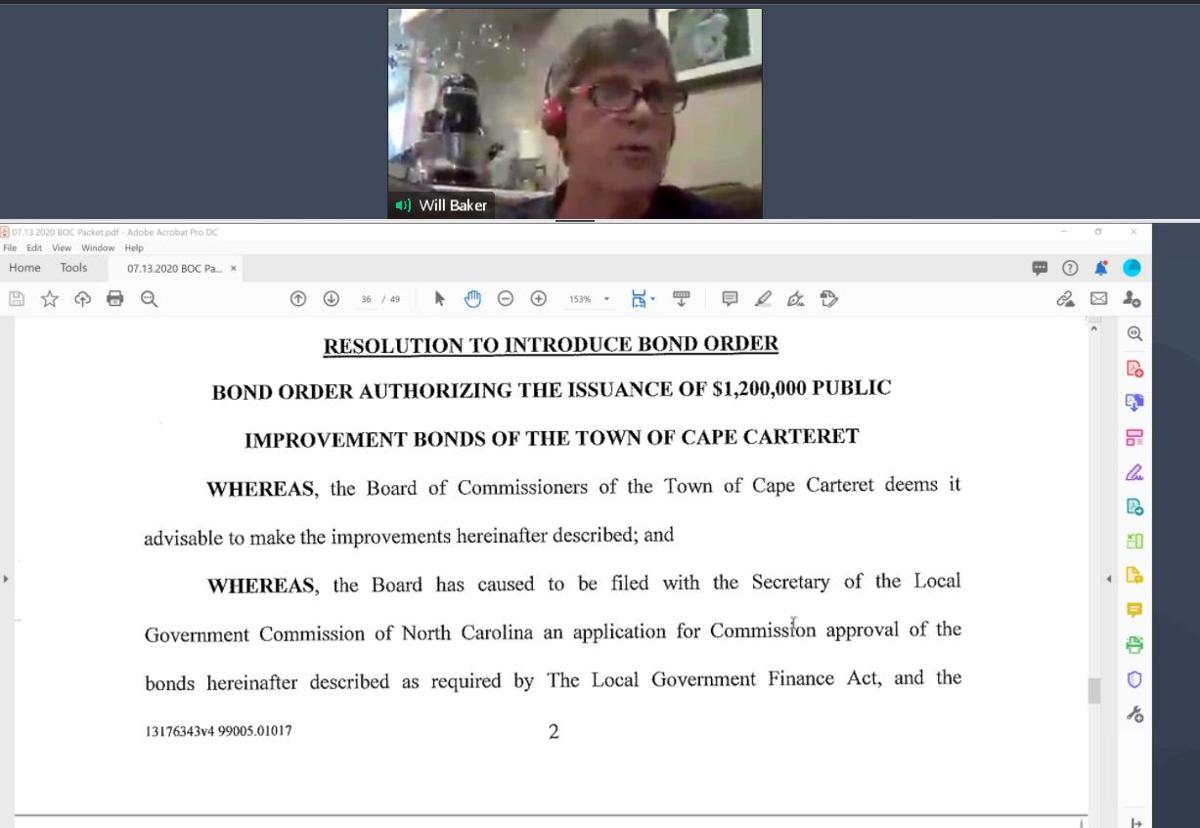 Two of the resolutions during the Cape Carteret Board of Commissioners’ GoToMeeting session passed by 3-2 margins, the same as votes the commission cast in a June to take the first step toward the Tuesday, Nov. 3 referendum. Commissioners Mike King, Steve Martin and Don Miller were in favor, and commissioners Jeff Waters and Jim Nalitz were against.

The resolutions included findings of fact, and one finds the board deems it “advisable” to build the trail, which is to be a 3.5-mile triangular “loop” along Highway 24, Highway 58 and Taylor Notion Road. Portions have been built along each road, but grant money and donations for the remaining 1.9 miles of construction have dried up.

The third resolution, approved by a 5-0 vote, set the date for the public hearing. Mr. Waters and Mr. Nalitz said once the first two resolutions won approval, they favored moving forward with the hearing to see how residents and taxpayers feel about the referendum.

“It’s for the citizens to decide,” Mr. Martin said. “It should have been held before the first ground was broken. If they want it, they’ll say yes. If they don’t, they’ll say no.”

Mr. Nalitz said he doesn’t think the trail meets any needs of the community, and he couldn’t support the resolutions.

“People need roads and streets (improved),” he said. “This is not necessary at this time. I just don’t see it, especially the way the economy is at this point.”

Mr. Miller said if the town board were voting to spend the tax money now, “I’d not be on board.”

“We’ve already spent a quarter million dollars for something that’s in bits and pieces. Now is the time to put it out to a vote,” he continued.

If taxpayers don’t want any more of money spent on the project, Mr. Miller added, the town can continue to seek grants and donations to finish the remaining 1.9 miles.

Mayor Will Baker, who votes only to break ties, said things have changed since 2015, when a previous board voted to build the trail with the goal of completing it by 2018.

He said he, like Mr. Waters, would rather see more money to fix “roads people use every day,” but the public hearing will let the board know how the taxpayers feel.

Town Manager Zach Steffey said a survey taken a year or so ago on the town website and by email indicated the public was split about 50/50 on the trail.

The manager has already filed the application for approval of the bonds by the N.C. Local Government Commission and said Monday the LGC has indicated a 20-year bond payback would likely carry an interest rate of about 4% percent and add $486,000 in interest to the payback. That would bring the total payback to nearly $1.7 million.

Mr. King said he doubted the interest rate would be that high and predicted 2% or 3%.

The board hopes to hold the public hearing in town hall or outside of it, but it will also be electronic.

Mr. Miller said he wants to see and hear the taxpayers.

“Not everybody is computer literate,” he said, and a face-to-face hearing will draw more people.

Caitlin Sabadish, director of the Carteret County Board of Elections, said last week her office needs the language the town wants on the ballot by Wednesday, Aug. 5, which is five days before the town’s public hearing. It hasn’t been received the verbiage yet.

If, after the hearing, town commissioners decide they don’t want to move forward with the referendum, it would still be possible to withdraw if the ballots haven’t been printed.

“We have to have our ballots ready by (Wednesday) Sept. 4, when early voting starts,” Ms. Sabadish said.

That means the office likely would start printing ballots sometime in the second week of August, she said.

If that’s already been done before the town holds the hearing, it might be too late to pull the referendum even if public opinion sways the commissioners against moving forward, she said.

Because of state rules for voting on items after public hearings conducted electronically, the board won’t be able to vote at the Aug. 10 meeting and will wait a special meeting Thursday, Aug. 13 to vote to officially put the referendum on the ballot. Mr. DeSelms said he believes the town can make the dates work to give taxpayers a vote Nov. 3.