CARTERET COUNTY — Restaurants, hotels, medical practices, churches and many more were among the hundreds of Carteret County businesses that received funds through a federal novel coronavirus aid package designed to assist small businesses weather the pandemic.

The Treasury Department last week released the names of more than 650,000 businesses that received between $150,000 to $10 million through the Paycheck Protection Program. Administered through the U.S. Small Business Administration, PPP made more than $650 billion available to small businesses for paying employees, rent/mortgage, utilities and other expenses.

The program especially incentivizes businesses that retain existing employees and hire new ones. The SBA will forgive loans in full for businesses that use at least 60% of the funds toward payroll needs. Otherwise, the loans have a 1% interest rate and must be repaid in two years. 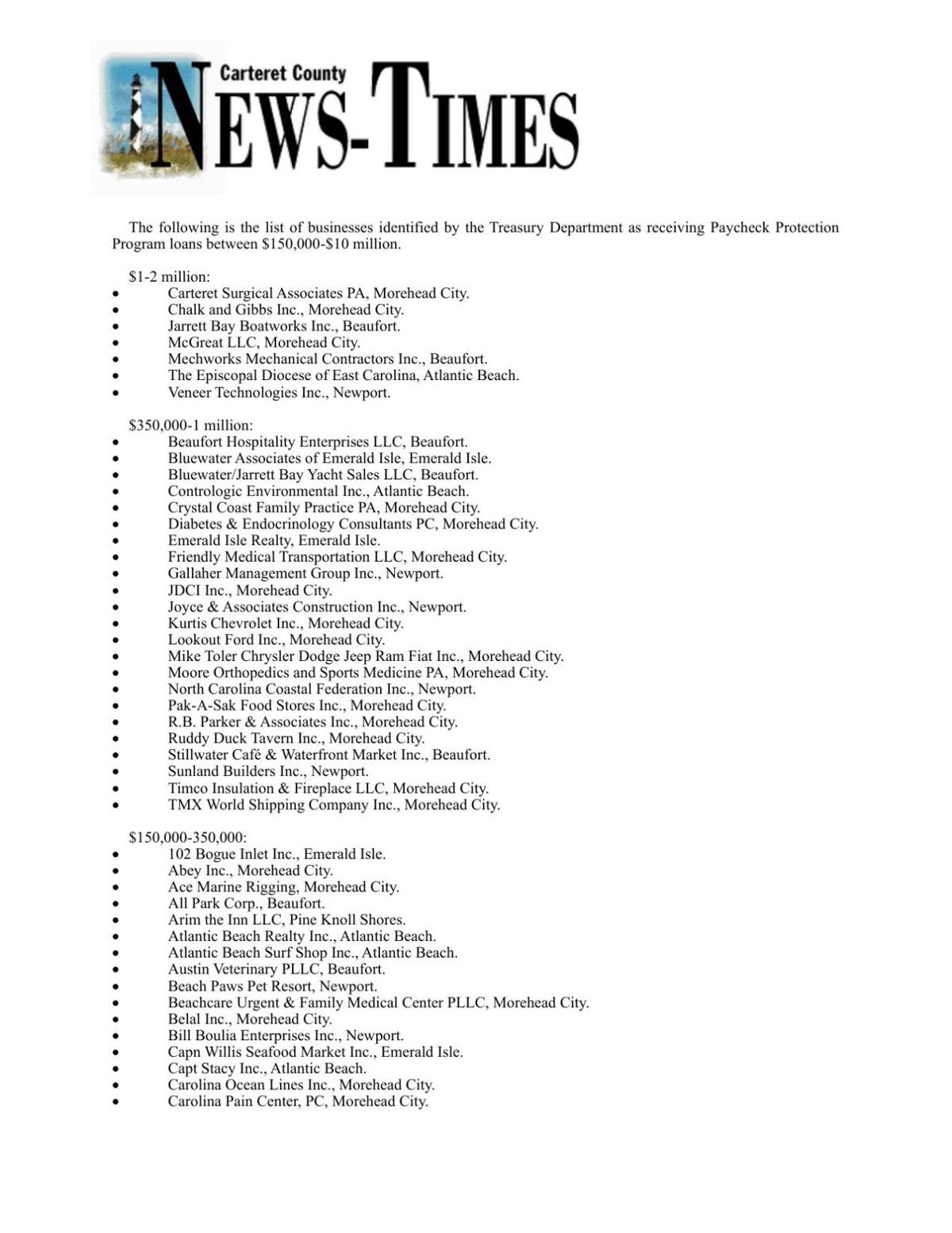 Locally, the businesses receiving PPP funds collectively employ thousands of county residents. They range in size from fewer than 10 to nearly 200 employees, across a range of industries, from hospitality and service, to manufacturing and trades. Religious organizations, schools and nonprofits were also among the loan recipients. The majority received loans in the $150,000-350,000 range, with seven county businesses getting up to $2 million.

“Needless to say, the sharp economic downturn and the social distancing requirements depressed donations and charitable giving as well as restricted our ability to hold paid in-person programs and fundraising events,” Mr. Miller told the News-Times. “Our staff has largely been working from home since March, and we don’t anticipate being able to return to normal operations for many more months.”

Mr. Miller added the NCCF has seen a downturn in what it calls “reoccurring revenues” from donors and activities, and he anticipates the trend will continue well into next year or longer, depending on the state of the economy.

“The financial impact of COVID is likely to remain with us, and we sought this financial help as a way to keep our existing workforce and offer them some economic security during these very uncertain and unpredictable times,” he said. “This program has enabled us to compensate for reduced revenues and keep our staff working as we weather the consequences of this pandemic.”

Don Kirkman, director of the Carteret County Economic Development Department, said PPP was a “lifeline” to the county’s small businesses that otherwise would have had to close or file for bankruptcy as a result of the pandemic.

“Carteret County’s business community consists largely of small businesses, many of which had to close temporarily because of COVID-19.  Many that could remain open experienced significant loss of revenue,” he said. “…Fortunately, most of the county’s small businesses have been able to avert permanent closures, and many are reporting that they are experiencing strong summer business.”

Mr. Kirkman said the EDD assisted numerous businesses with finding information related to PPP. He acknowledged there were initially some issues with the program and some business owners and lenders expressed frustration at the application process.

“That was understandable given the speed with which the program was created and the complexity of the loan guidelines,” he said. “Although it was not without glitches, for many companies experiencing disruption the PPP program was critical to their survival.”

In addition to the companies identified as receiving between $150,000 to $10 million, the Treasury Department released a list of companies receiving loans below $150,000, sans identification. In Carteret County, more than 480 businesses received up to $150,000, with the smallest loan amounts only a few thousand dollars.

Although PPP was designed for small businesses, The Associated Press reports some larger companies owned by high-profile individuals also received funds. Additionally, a number of businesses are owned by members of Congress or their families, but AP did not find any evidence of preferential treatment.

Long live socialism. I'll be looking forward to the next editorial that denounces the Supplemental Nutrition Assistance Program (SNAP) and Medicaid just to name a few. While the average two person household received two thousand plus dollars collectively, neither a plan or desire to save for business emergencies regardless of reason seems evident here. When you kiss the ring you usually get rewarded. Congratulations.