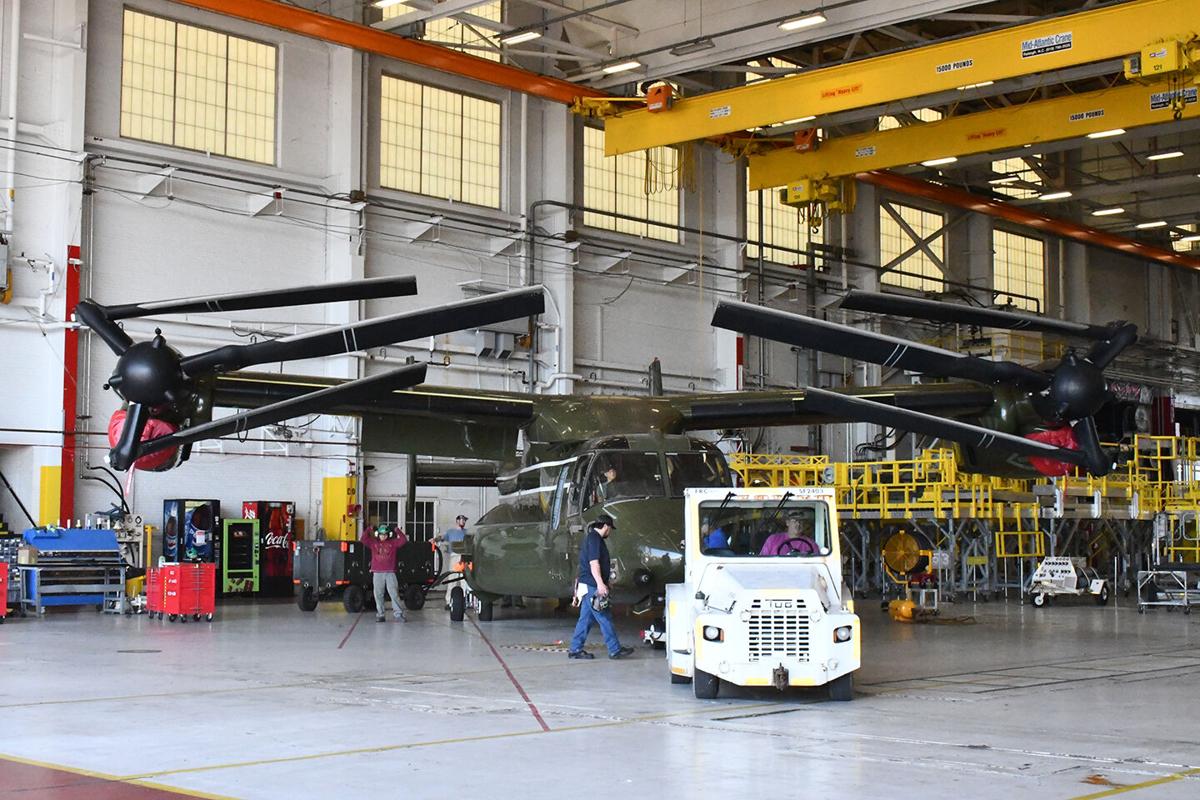 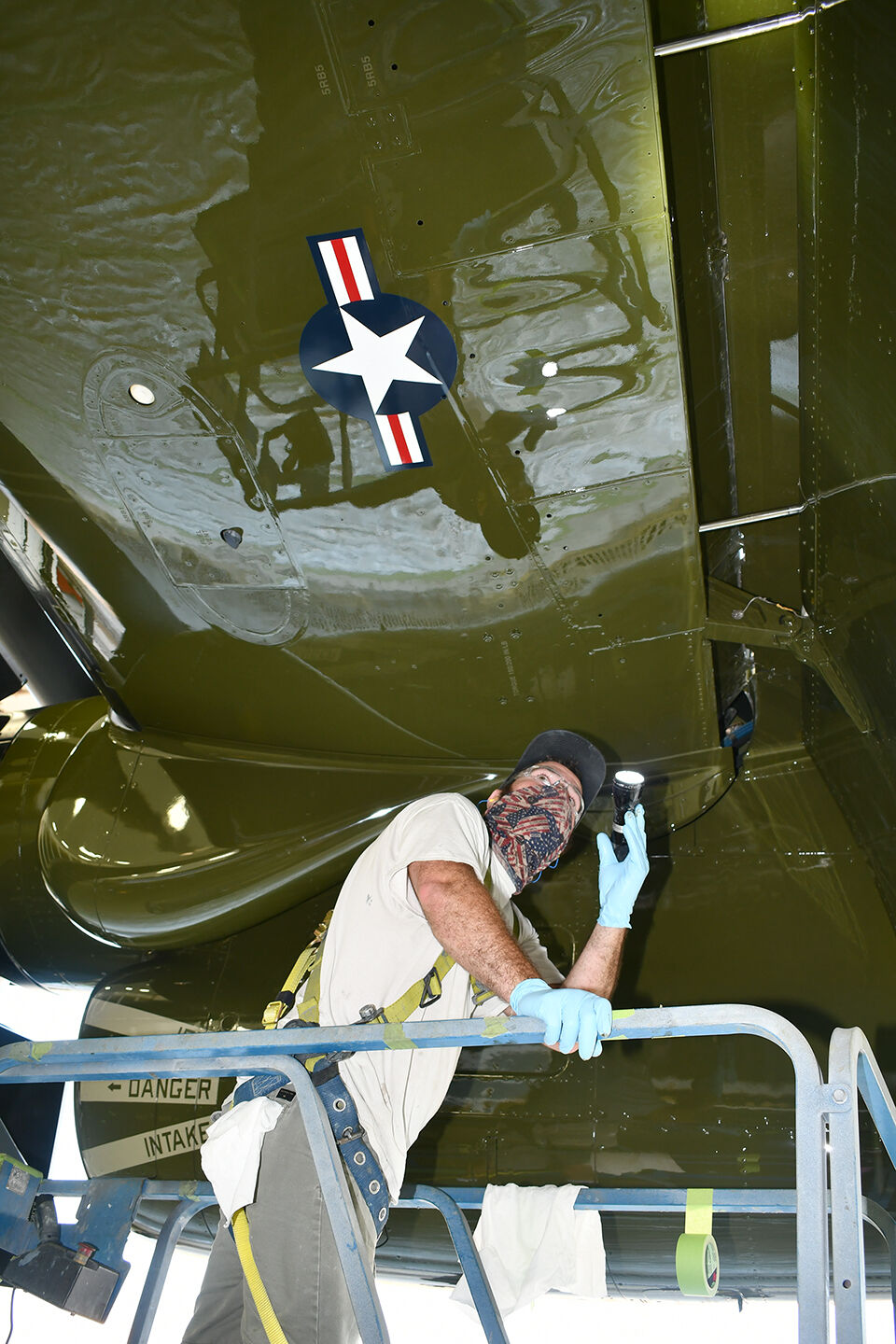 CHERRY POINT —  Fleet Readiness Center East opened a new chapter of service Aug. 11 as it completed work on the first of the fleet MV-22B Osprey aircraft flown by the Marine Corps squadron tasked with helicopter transport of the president of the United States.

FRC East has conducted modification and Planned Maintenance Interval, or PMI, events for Navy and Marine Corps V-22 aircraft since 2009, when the depot inducted its first Osprey. Now, the facility will provide that same support to Marine Helicopter Squadron 1. The HMX-1 “Nighthawks” fleet includes a number of “Green Top” MV-22B aircraft, which are all scheduled to receive PMI-2 service at FRC East in the coming months following the successful completion and early return of the first aircraft.

“These HMX-1 V-22s are national assets, performing a very visible and important mission,” FRC East commanding officer Col. Thomas A. Atkinson said. “I’m very proud of the V-22 PMI line and our paint shop for a job well done and done so quickly; the aircraft looked really good and we delivered it a month ahead of schedule.”

FRC East first began working with the presidential helicopter in 1967 and, in the past, the depot has serviced CH-46 and CH-53 helicopters for the squadron, as well as the T58-400B engine that powered the presidential VH-3D Sea King and the “White Top” VH-3D itself, also known as Marine One.

The VH-92 Fleet Support Team, based at Fleet Readiness Center East, provides engineering and logistics support and assistance for the new VH-92A White Top platform, which is scheduled to serve as the new Marine One.

When FRC East artisans wrapped maintenance on the first HMX-1 Osprey inducted into the facility, the depot beat the requested turnaround time by 28 days, returning the aircraft in just 122 days when the initial goal was set at 150, said Andrew Rock, the depot’s V-22 branch head. The V-22 line was able to move from induction to functional check flight (FCF) within 74 days, which represents a hugely successful effort that played a major role in FRCE beating the turnaround goal, he noted.

According to Mr. Rock, the initial plan was to conduct the HMX-1 Osprey PMI-2 events at Marine Corps Base Quantico, Va., which presented several logistical challenges for the V-22 line at FRC East – including the prospect of sending Cherry Point-based artisans to Quantico for an extended period of time. Leaders reached an agreement to send the first V-22 to FRC East with a targeted turnaround time of 150 days; if FRC East could meet this goal, the depot could conduct the required maintenance on the remaining HMX-1 Ospreys at Cherry Point.

“It was a prototype, essentially,” Mr. Rock said. “There’s a certain schedule that has to be met. We didn’t initially have an estimate on what the actual turnaround would be, because we had no idea what the aircraft was going to look like when it came in. We didn’t know what we were going to find when we started disassembly for the PMI.”

The HMX-1 aircraft currently in process turned out to be especially “clean,” meaning there were minimal hidden issues, Mr. Rock said. That contributed to the remarkable speed with which the team took the V-22 from induction to FCF, a performance he considers a great success.

The next V-22 from HMX-1 is already scheduled for induction this fall, with the possibility of moving that induction date up, because the team completed the initial Osprey so far ahead of that initial 150-day goal.

“There was a lot of concern regarding the ability to complete a 150-day turnaround time at FRCE, so it’s good for everybody out there to see us perform,” he said. “We did it, and we did it well, and that’s exactly what the (commanding officer) wants to show.”

The short turnaround from induction to flight check was a point of pride for Rock and the V-22 artisans at Cherry Point, he said. There’s also the prestige that comes with providing services to the Marines who support the president, he added.

“I’ve said it all before: There’s been a lot of attention on the V-22 line, but really everything that happens is due to the artisans and the support staff,” Mr. Rock said. “They have gotten behind every initiative that’s been thrown their way and they have supported it and followed through.

“That shows in the results we’re getting,” he continued. “We have the skills, we have the abilities – and when the logistical elements line up, I believe there’s nothing we can’t do.”