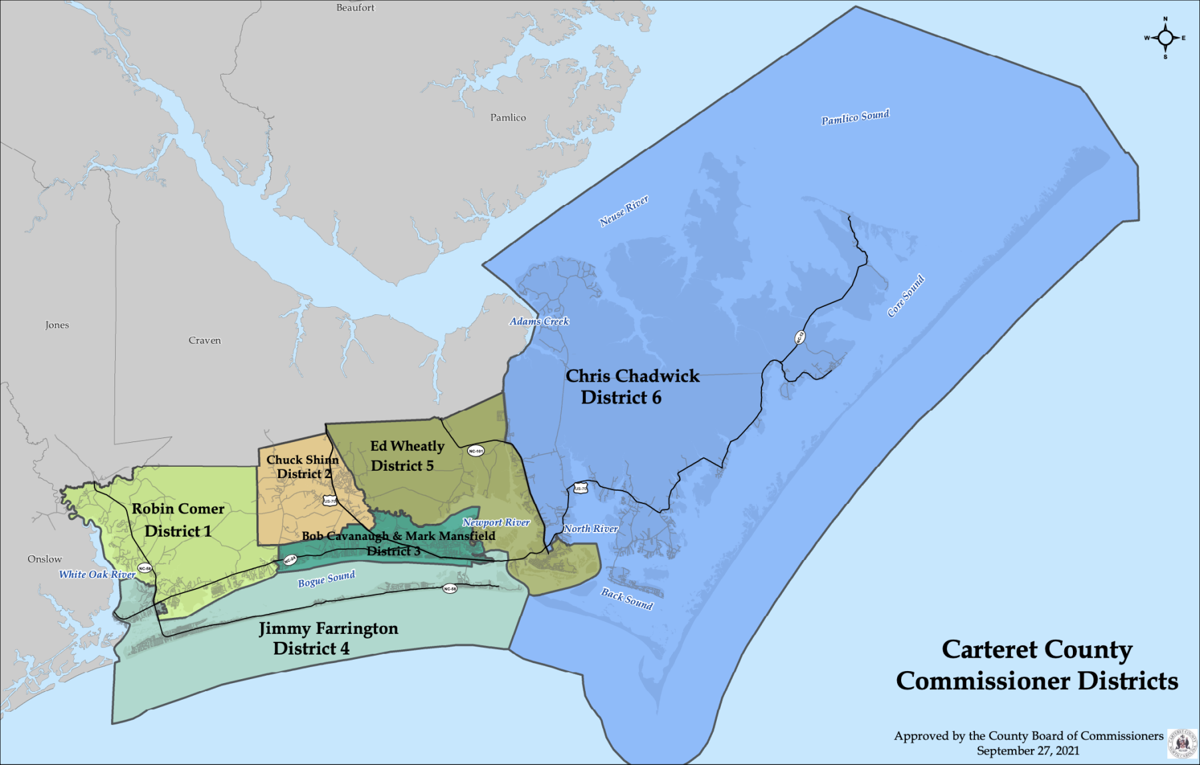 This map shows the new electoral district boundaries for Carteret County, including the commissioner who represents each district. The Carteret County Board of Commissioners adopted the new map based Sept. 27 based on the results of the 2020 census. (Carteret County map) 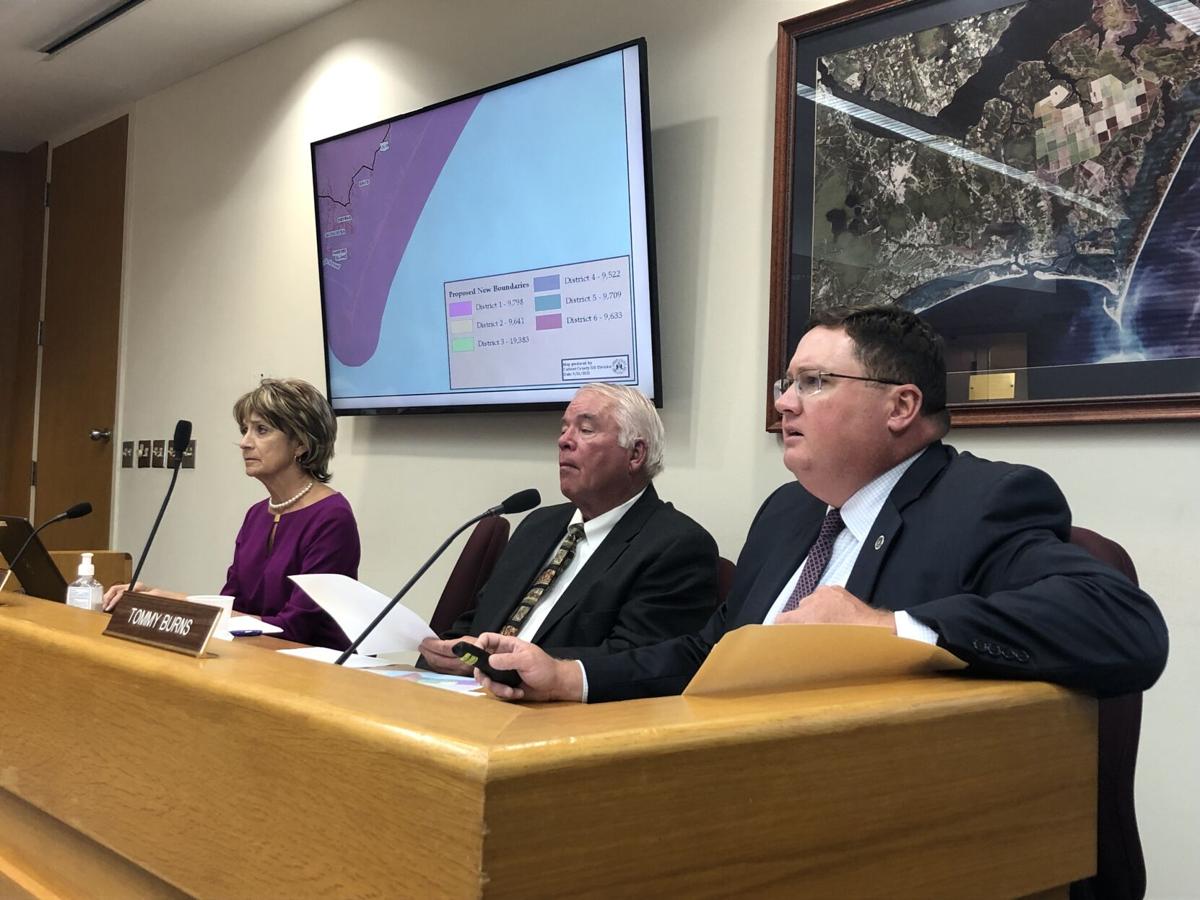 Carteret County manager Tommy Burns highlights the population breakdown of the new electoral districts during a special meeting of the County Board of Commissioners Sept. 27 to adopt the new maps. (Elise Clouser photo)

These two maps show the differences in the boundaries of the old, left, and new, right, electoral districts, including a key with the populations per district. (Carteret County maps)

BEAUFORT — The results of the 2020 census show Carteret County’s population is generally shifting westward, a change that’s reflected in the recently adopted electoral district maps that will be in effect for the next 10 years.

The Carteret County Board of Commissioners held a special meeting Sept. 27 to review and approve the new maps, which were created by staff based on updated population data released by the U.S. Census Bureau earlier this year. The data showed Carteret County’s population grew by about 2% since 2010, though the growth did not occur equally throughout the county.

In general, the western end of the county – towns like Cape Carteret and areas along the Highway 24 corridor – gained residents, while areas Down East largely lost them. The shift meant the boundaries of the county’s electoral districts had to be adjusted to ensure each district represents roughly the same number of residents, within a margin of plus or minus 5%, as required by state statutes.

With Carteret County’s population totaling 67,686 in the 2020 census, the ideal population per commissioner was determined to be 9,670 residents, doubled to 19,340 for District 3.

For example, under the old boundaries, District 6, currently represented by Commissioner Chris Chadwick and encompassing Down East and North and South River, had a population of 8,251. That compared to District 1, currently represented by Commissioner Robin Comer and covering western Carteret County, with 11,734. The numbers represent the population after the 2020 census count, but before redistricting took effect.

Others districts were closer to the target population, but still required adjustment to be within the necessary 5% margin of the ideal population.

The boundaries of District 4, currently represented by Commissioner Jimmy Farrington, which previously covered Bogue Banks and a small portion of downtown Morehead City, moved north to now include Cedar Point and Cape Carteret, previously part of District 1. The eastern boundary of District 1, which includes Bogue, Peletier and parts of the Highway 24 corridor, stayed roughly the same.

District 2, currently represented by Commissioner Chuck Shinn and covering Newport and surrounding areas, had to shift its boundaries south to include more of the Highway 70 corridor. On the other hand, District 3, represented by commissioners Mark Mansfield and Bob Cavanaugh and covering Morehead City and the eastern portions of the Highway 24 and Highway 70 corridors, lost some ground overall, though it gained back downtown Morehead City.

None of the county commissioners or school board members will be displaced from the districts they currently serve in, based on the new electoral map boundaries.

Commissioners mentioned there had been discussions of possibly splitting up District 3, giving the county seven electoral districts for a 1:1 ratio of districts to commissioners, but they decided not to move forward with it this redistricting cycle. The next time that could be considered is when the electoral maps are adjusted again after the 2030 census.

“I think the next census, if things go as they are, it’s going to have another western shift,” Mr. Comer said. “…For the next evaluation of this, I would love to see that district split up, so you got the (Highway) 24 corridor has its own representative.”

Mr. Burns noted such a change would require an amendment to the session law that established the current district allotment in Carteret County.

A representative from the Carteret County League of Women Voters, Ralph Hall of Atlantic Beach, showed up to the commissioners special meeting Sept. 27 and made a public comment asking the board to share a complete set of criteria it used to establish the new district boundaries. He also asked commissioners to wait until the public had more time to review the proposed maps before making a final decision on the maps.

Mr. Burns noted, however, “time is of the essence” in adopting the new maps because they must be in place at least 150 days before the primary election scheduled for Tuesday, March 8. Changes in district boundaries will not affect the unexpired term of a commissioner.

After some discussion, the board of commissioners voted unanimously, with Commissioner Farrington absent, to approve a resolution adopting the new electoral district map.

To view a GIS version of the new district map, visit https://arcgisweb.carteretcountync.gov/maps/, and toggle the “Commissioner Districts” option under the “Layers” tab.

To learn more about Carteret County elections, including a search of whether the changes affect your address, visit carteretcountync.gov/434/Board-of-Elections.