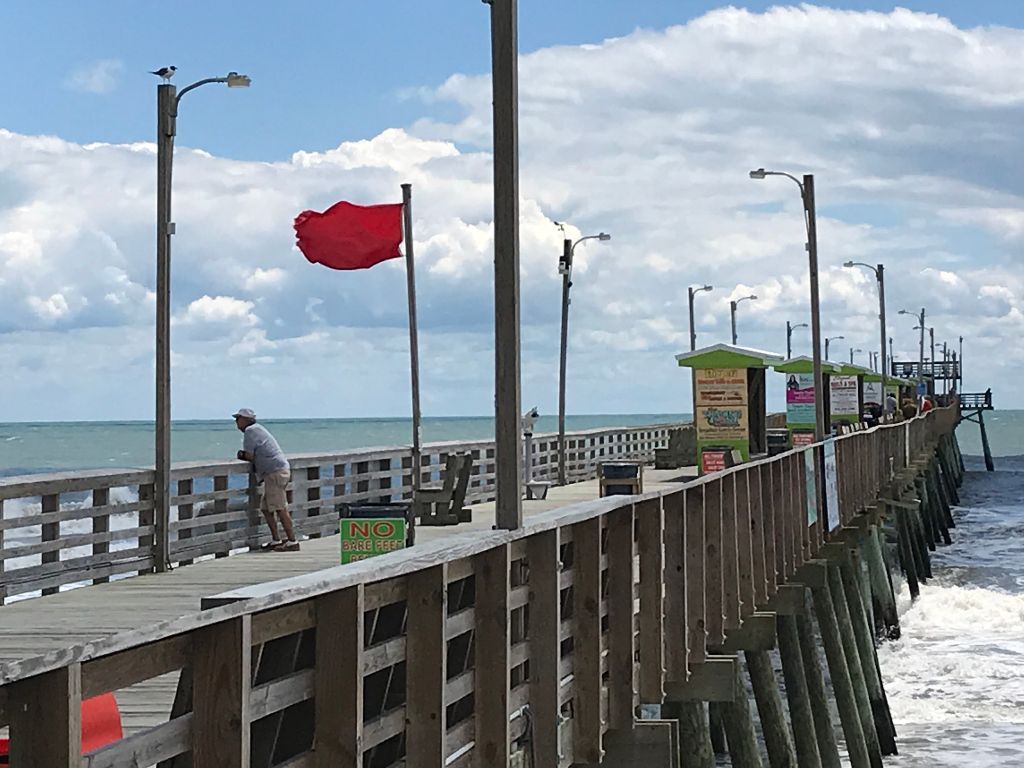 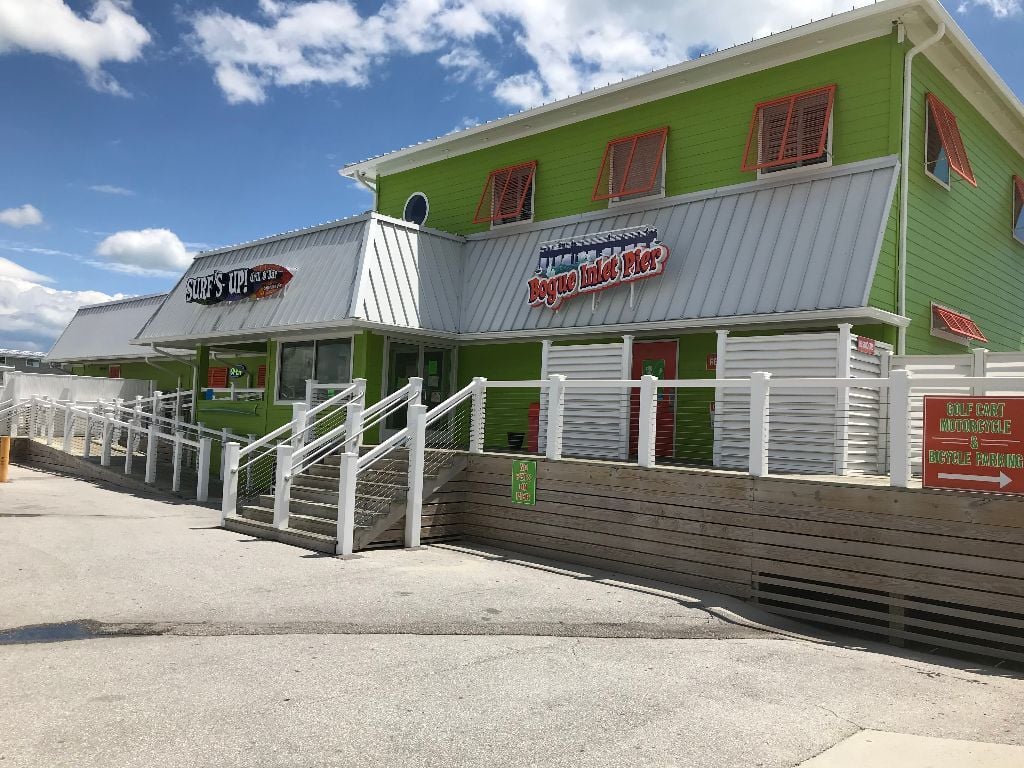 The Bogue Inlet Fishing Pier property, show here in late spring, is up for sale for no less than $18 million, according to owner Mike Stanley. (Brad Rich photo)

EMERALD ISLE — The most venerable and visible landmark in Emerald Isle, other than the ocean, is for sale.

Mike Stanley, owner of the Bogue Inlet Fishing Pier, said Wednesday his asking price for the property is $18 million, and he thinks that’s cheap.

“I won’t take anything less than that,” he said. “It could take a few years to sell it. But I think there will be a lot of interest.

“There are a lot people from up north coming down here, bringing a lot of money and looking to invest and get out of all the craziness up there,” he continued.

The sale will include the pier, parking lots, Surf’s Up Restaurant and Beachfront RV Park.

When the sale happens, Mr. Stanley said, “That’s it for me. I’m out. I won’t be turning right (at Bogue Inlet Drive) anymore.”

The pier was built in the late 1950s and has been in the Stanley family for 49 years, he said. It’s doing great this summer – “wide open,” he said – after being closed in the spring because of the novel coronavirus pandemic.

The pier and other businesses on the property have been all-consuming, and Mr. Stanley has been hands-on, showing up for work and talking to customers.

The pier has been repaired, almost rebuilt, many times after hurricanes, as well, and Mr. Stanley said he’s enjoyed keeping the whole thing running.

“There have been challenges,” he said, “but I’ve always enjoyed making changes, making it better. For us, it really hasn’t been about the money. It’s been about the satisfaction you get from running a business and putting out a ‘product’ based solely on people enjoying it. I’ve always known that if people didn’t have fun here, I wasn’t doing my job. And I’ve had fun, too.”

In fact, Mr. Stanley thinks that’s a big reason the pier has been a success these many years.

“We know how to have fun and how to help other people have fun,” he said.

The business has grown with Emerald Isle, which was chartered as a town in 1957, and the Stanley family and the town have often been partners. For example, the town’s Fourth of July fireworks show has been launched from the pier for years, attracting thousands of visitors on a day the pier is not open for fishing.

Emerald Isle has taken off in the last few years, for good reason, Mr. Stanley said, and he also knows the pier is a part of that.

“It’s one of the premiere properties on the East Coast, and the town is a big part of that,” he said.

Vacationers are increasingly shying away from other resort areas, like Ocean City, Md., and Myrtle Beach, S.C., Mr. Stanley said, because those places have lost some things Emerald Isle has managed to maintain despite its growth: community and small-town feel.

He plans to remain a town resident and thinks Emerald Isle has a bright future, but doesn’t think there’s much room for a lot of growth. He believes that’s a good thing. In the early 2000s, he recalled, there was talk of a regional sewer system, piping waste from Bogue Banks across Bogue Sound to a sewer plant.

It didn’t happen, and Mr. Stanley thinks that was the best decision local officials made. If sewer had come, growth would have come faster and would have been more overwhelming.

“I can’t think of a better place to live,” he said.

Mr. Stanley last tried to sell the pier in 2006, when a developer from Raleigh was trying to put together a mixed-use project. The town was interested in taking over the pier as part of the plan.

People in the RV park at the pier heard about the deal and panicked, however, many of them moving out.

Then the economy crashed, Mr. Stanley said, and “we almost lost it all.”

But he and his family persevered, making needed repairs, renovating the pier house and adding the restaurant. They’ve since greeted new generations of fishermen, observers, surfers and beachgoers, who have used the parking lots and beach access ramp.

Mr. Stanley said his sister is retaining her financial interest in the pier, so whoever buys it, “would be wise maintain it like it is.”

The pier went on the market Tuesday, and the sale is being handled by Mary Rawls Realty.

Mr. Stanley said he hinted to town officials a few months ago he might be selling, but there was not any interest this time around.

In the short time the pier has been on the market, he hasn’t had any “nibbles.” But Mr. Stanley knows just like fish will not bite one day but bite like gangbusters another, the offers will come, and he’s ready. He said he hopes there’s a bidding war.

I think i told Frank Rush this was going to happen years back, He and i had several talks about trying to get the town to move forward on building a new concrete fishing pier in Emerald Isle. But he could not get enough support from other town officials. Now if a person or persons come in and buy the Bogue Inlet Pier what attraction will we have ?? The town has took there sweet time doing nothing but waste time and money by not moving on the pier at the sight they have at the eastern access site. Here is a clip from Jan 9, 2013 ( Emerald Isle to go it alone with pier ) ( The move came through a series of four motions at their meeting Tuesday.

Commissioners agreed that it will be a long-term goal, likely five years or more, until it is completed, but believe they should carry out the project.

The estimated cost for a 1,000-foot long concrete pier structure is $10 million. The price would increase if the town decides to include a pier house as well.

It was referenced by several individuals that Bogue Inlet Pier – the only ocean fishing pier in the town – would not always be around and in the case that a storm destroys the pier beyond repair, the town should have a viable replacement ready.

The proposal for a pier and 13,000 foot pier house was first discussed in 2006, according to Frank Rush, town manager. In 2008 an agreement was made between the state, town and N.C. Aquariums that the pier would be open to the public by Dec. 31, 2012. If this deadline was not met, then the piece of property the town had originally agreed to donate to the pier would revert back to town property and the collaboration would effectively be terminated.) Now here we are 7 years later and no closer how slow are our town officials?????

Sad to see this happen. Even if some new owners decide to keep the pier (doubtful), it's hard to imagine anyone doing as good of a job with it as Mike Stanley has done. Mike is a hard worker and a decent human being. I hope he's able to get every dollar he's asking for. Mike, you deserve it!

I doubt i would give $18 million for the entire island....

That pier is part of our family history, as my children learned to fish there. It was a place that was safe to be all night and day. People were polite and any child with a fishing pole was treated as an equal, and people took the time to celebrate a youth's catch and give pointers. We spent many, many hours and days were enjoyed on that wonderful pier.

[crying] Its a shame. If he sells it to a Northerner. Theyre going to do the same thing they did to the sportsmens and Triple S piers. Rip them down and throw up condos. With the help of the town of course. In the best interest of tourism as their only excuse. RIP Bogue Inlet fishing pier.

I spent a week fishing off the Bogue Inlet Pier not too long ago. I also stayed at a motel adjacent to the pier's parking lot. It was a week of disasters. As soon as the sun went down, the fishing pier parking lot filled up with high schoolers, gadflies and the usual gang of suspects adrift in life. They spent hours upon hours riding around (in their daddy bought pick-up trucks flying American flags the size of a truck bed) in the parking lot burning rubber, blaring their radios and reving their engines. Of course Emerald Isle PD made several appearances at another hotel throughout the week. While I've spent decades fishing off the pier and found the new pier house accommodating, a large flat screen over the check-in desk constantly blaring Fox News was not exactly what I would have expected. Nor would I have expected "adults" on the pier constantly feeding sharks while taking videos of their new found fun. I'm a pretty serious fisherman and the Bogue Inlet Pier of old is nothing like the spectacle of today. I'd suggest bulldozing the current heap of trash.

I hate to see the Bogue Inlet Fishing Pier go up for sale. Because the buyer will more than likely be a developer and they will put condos or homes there. I have fished there for many many years. The saddest part is we are only going to have the trash pier left to fish from. The Oceanana Fishing Pier, Witch is a disaster for fishing. It is way to shallow to fish from. We have always called it the mud pier because most of the time it is always muddy. And soon Atlantic Beach is going to be in the same boat no pier, It is just a matter of time before the Oceanana goes up for sale also.

Wow !! Maybe we will have the first oceanfront walmart

Wish there wasn't a national coin shortage......I'd make a bid.

At $18 million the only thing an investor could do is redevelop the property, northerner or southerner investor.