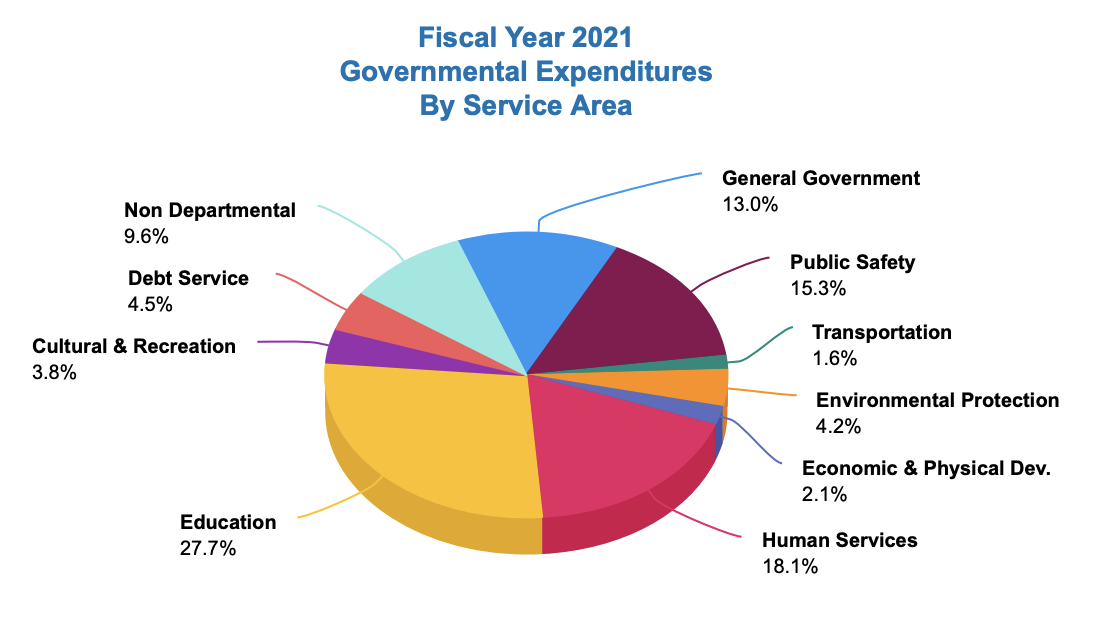 These pie charts show expenditures and revenues broken down by category for the Carteret County 2020-21 fiscal year budget. The county adopted the budget Monday with a tax rate of 33 cents per $100 of assessed property value. (Carteret County graphics) 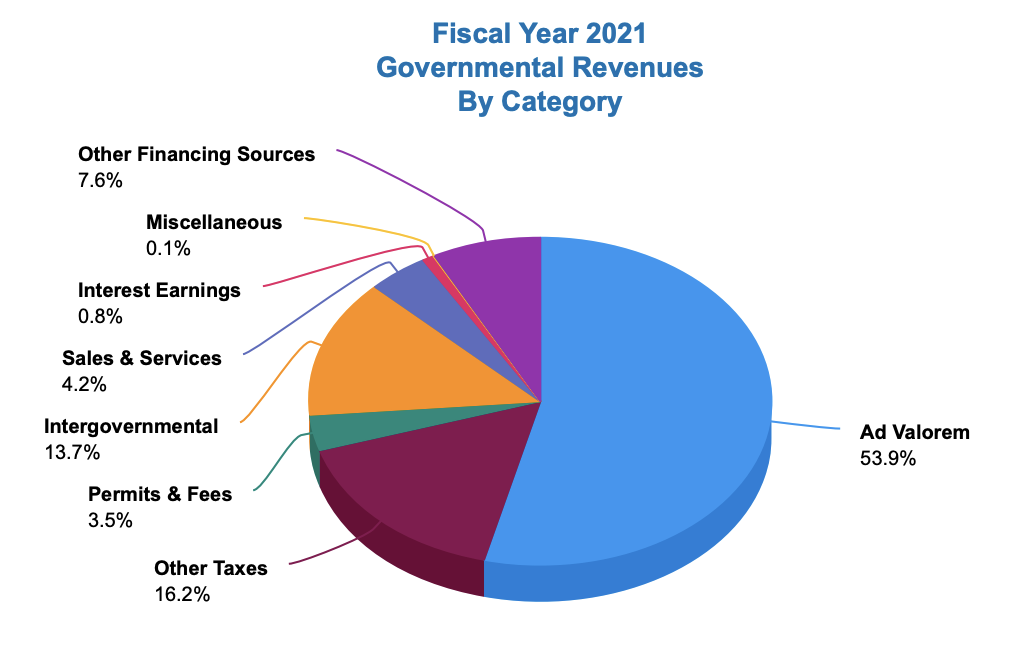 These pie charts show expenditures and revenues broken down by category for the Carteret County 2020-21 fiscal year budget. The county adopted the budget Monday with a tax rate of 33 cents per $100 of assessed property value. (Carteret County graphics)

BEAUFORT — The Carteret County Board of Commissioners adopted a 2-cent property tax increase as part of the fiscal year 2020-21 budget, approved by the board Monday evening.

The increase brings the tax rate to 33 cents per $100 of assessed property value, up from 31 cents. The adopted budget totals $123.1 million across all funds.

County commissioners considered the plan during the board’s regular meeting Monday in the commissioners’ boardroom of the administration complex in Beaufort. County staff said it was one of the most difficult budgets they’ve ever had to prepare because of the financial impacts of the novel coronavirus and the resultant economic slowdown.

“Our staff has worked through this, this is probably the most challenging budget I know that I’ve had since I’ve been here, and I think (County Finance Director Dee Meshaw) would agree,” County Manager Tommy Burns said.

The county held the required public hearing on the budget June 1, during which nobody spoke. Commissioners cleared up a few lingering questions about the plan Monday evening before voting unanimously to adopt the budget. The new fiscal year begins Wednesday, July 1.

Several commissioners said while they didn’t necessarily want to raise taxes, the increase was necessary this year to maintain services at their current level. The increase is the first since 2016-17, when the rate increased from 30 to 31 cents. The county still has the lowest property tax rate in North Carolina.

“We have held the tax up to this point, I’ve been proud of it,” Commissioner Robin Comer said. “…It seems like we’ve been hit from left and right, left and right the past couple years with storms and now COVID, and that all has an effect on our income and expenses.”

The county anticipates at least a $1.5 million revenue shortfall due to COVID-19 next fiscal year, including about $800,000 in lost sales tax revenue and about $700,000 in investment earnings. Also, Ms. Meshaw noted the county is still waiting on about $3.5 million in Federal Emergency Management Agency reimbursement money to replenish the county’s fund balance.

The adopted $123,162,935 budget represents a 23.64% decrease, about $38 million, over the 2019-20 amended fiscal year budget. The county says the decrease is due to the completion of several big-ticket capital projects in the past year, including phase two of a beach nourishment project, land acquisition, dredging efforts and school capital needs.

Based on the current assessed property valuation of $16.54 billion and a 33-cent tax rate, the county will generate a projected $53.42 million in revenue, about 55% of the general fund budget. Other major sources of revenue include sales tax, projected at $16.4 million; intergovernmental revenue, $14.12 million; permits, fees, sales and services, $7.56 million; and investment earning, $450,000.

Education is the single largest source of expenditures in the general fund budget at $28.8 million, about 29% of the fund. Debt service for the school system totals an additional $4.73 million. The education budget funds operations and capital needs of the county’s public school system, including pass-through funds for charter schools, and also allocates about $2.67 million for Carteret Community College.

The budget also increased funding for the information technology, human resources, tax and register of deeds departments, with IT and tax seeing the most significant increases. The increase in IT can be attributed to the library system becoming a county department and for equipment upgrades.

Public safety expenditures total $15.47 million, about 15.6% of the general fund budget. That is up about $418,000 over the current fiscal year, with most of the increase going toward personnel and contracted services for the detention center.

The transportation budget increased, as well, with funding included for new Carteret County Area Transit System vehicles. The vehicles are 90% grant-funded. The increase is also due to two part-time drivers moving to full-time positions.

The county plans a cost-of-living pay adjustment for employees toward the end of 2020. Also, the budget funds 28 new positions, the majority of which are for the Carteret County Public Library System.

Last year, the county decided to pull out of the regional library system, so the positions it funded through its annual contribution will now come under the county’s payroll.

Government's solution to everything. raise taxes.

Just hope that the voters of this County remember this when the next election rolls around . Times are hard right now and many of us are out of work and what does our county commissioners do, find a way to jack up our taxes by 10% right after a re-evaluation. Might have the cheapest tax rates in NC but near the top when comparing the total property taxes paid due to jacked up property values. Nov cant get here quick enough as far as I am concerned.

"23.64% decrease, about $38 million, over the 2019-20 amended fiscal year budget. The county says the decrease is due to the completion of several big-ticket capital projects in the past year, including phase two of a beach nourishment project, land acquisition, dredging efforts and school capital needs."

Maybe it wasn't a good time to spend $38 million on such items? Land acquisition was it really needed? Beach nourishment? And phase 2 of it at that. Love how we the people of the county foot the bill for the beaches that we can barely get to because of all the people that come from ALL OVER THE COUNTRY. No problem, we'll pay for EVERYONES beach. Dredging efforts? Sure, I don't own a boat, or a dock, or a containment shipping boat, OR a port but no problem.

There is so much waste in these budgets that benefit so few people. Lots of wants, verses what it really NEEDS.

What world do these people live in? We are coming out of a hurricane that devastated this area. There are people who STILL are trying to get their homes repaired. That have been scammed of hundreds of thousands of dollars from fake, fraudulent "contractors". Some will never get their homes back! Insurance has increased. Mine went up 25%

People are out of work, food and supplies are skyrocketing because of this "pandemic". They will continue to rise to make up for the cost of all the food, and supplies that have been lost due to the peaceful protest.

We are told to tighten up, well maybe someone needs to send that memo to the powers that be.

Disgusting to say the least!

So much for “conservative” governance. They couldn’t find anything to cut? I propose that any commissioner that votes for a tax increase is ineligible to collect the stipend for being a commissioner during his/her term.

This is what happens when you have politicians that love to spend other people's money. Guess we need to elect some politicians that do not have a load of money since our politicians have no problem coming up with a few extra hundred dollars each year due to increased taxes

Yes let's all vote...Mayor Cooper and some board members must go. This budget makes no sense at all during these troubled times.