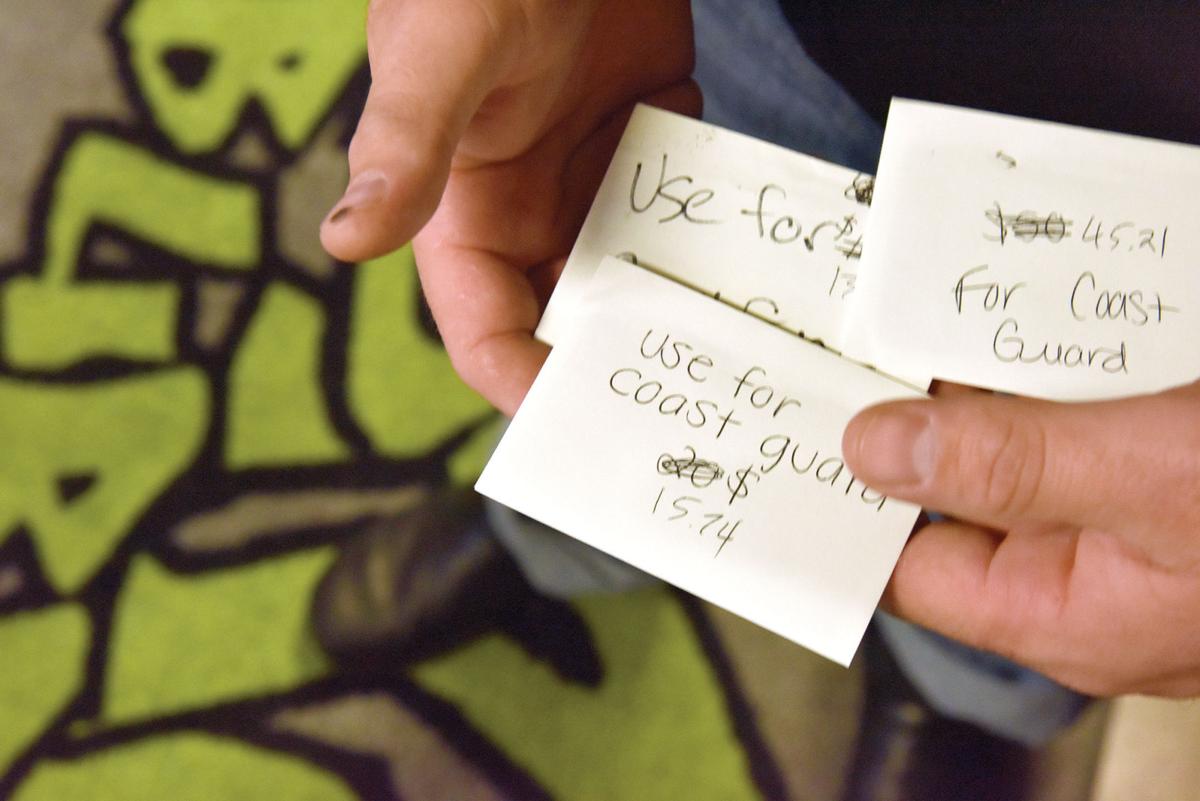 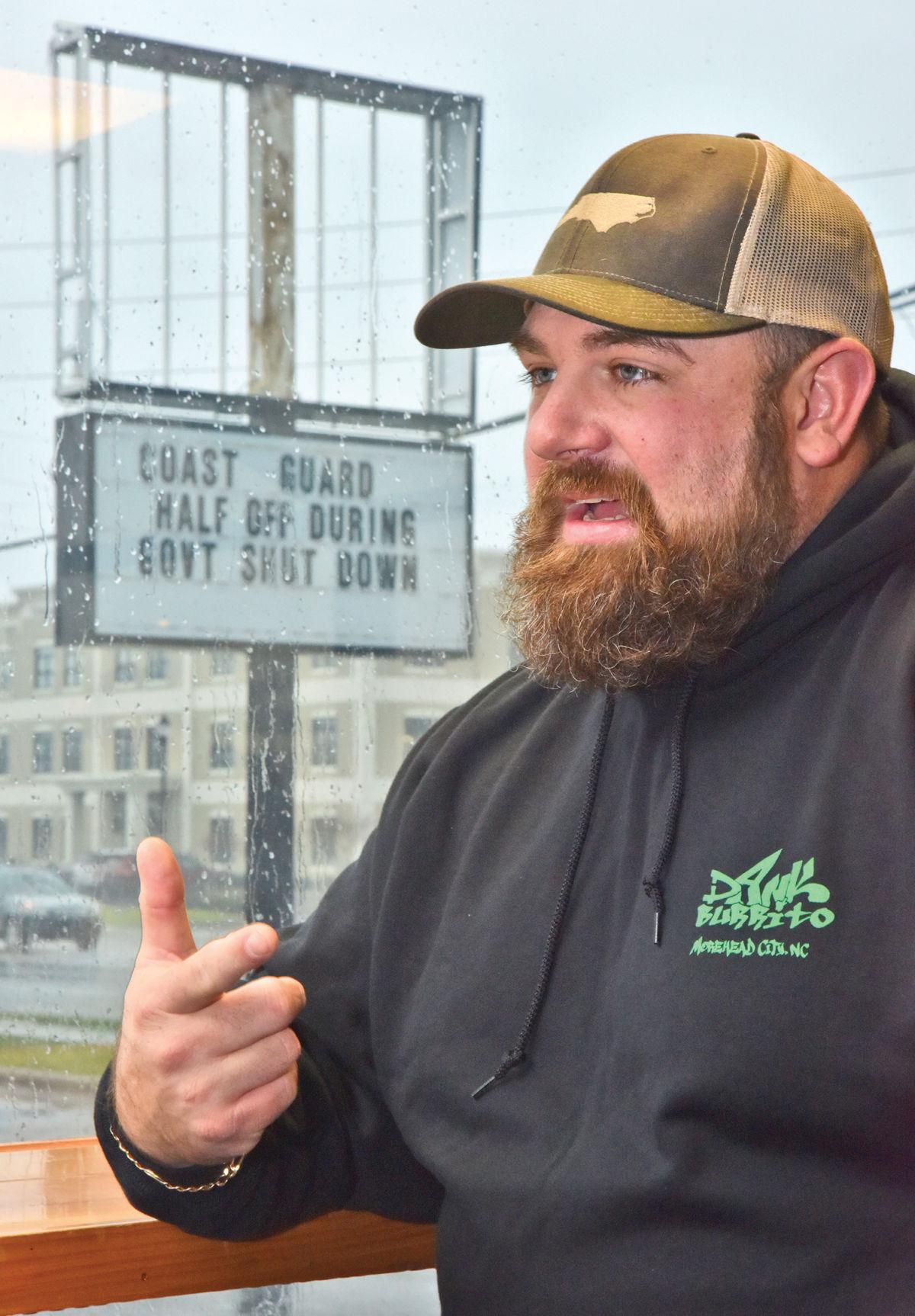 Clarke Merrell, owner of Dank Burrito in Morehead City, is offering discounted food to members of the U.S. Coast Guard while the federal government is shut down. (Dylan Ray photo)

Clarke Merrell, owner of Dank Burrito in Morehead City, is offering discounted food to members of the U.S. Coast Guard while the federal government is shut down. (Dylan Ray photo)

MOREHEAD CITY — With no clear end in sight for the partial federal government shutdown, a growing number of county businesses are offering deals and discounts to government employees under financial strain due to the lack of pay.

About 800,000 government workers nationwide are either furloughed or working without pay as Congress and President Donald Trump feud over funding for a southern border wall. Locally, members of the U.S. Coast Guard, the National Park Service and the National Oceanic and Atmospheric Administration are among those affected by the lapse in funding.

Today marks the second missed paycheck for many of those government employees since the shutdown began Dec. 22. While they will receive the majority of their wages in backpay once the ordeal is over, many are struggling to make ends meet in the meantime.

Dank Burrito is one of several county restaurants offering a 50 percent discount to U.S. Coast Guard members who show a valid ID.

Mr. Merrell said he has many friends and family members, including his brother-in-law, in the Coast Guard, so he has seen some of the effects of the shutdown firsthand. He said while his brother-in-law is well established in his career and has been able to fall back on savings, not everyone is in such a secure a financial position.

“My brain just goes to what can we do to help, what can we do to serve our community and our people,” Mr. Merrell said. “...Everybody was talking about how bad it was, but they weren’t talking solutions, so I thought of something that could help.”

Dank Burrito General Manager Robert McGinnis estimates the restaurant has served more than 250 discounted meals since they announced the offer a couple of weeks ago. Additionally, some generous customers have been leaving cash and gift cards at the register for Coast Guard members to use for their food.

“Yesterday somebody in the Marine Corps came in and left a $100 bill, that’s happened three times,” Mr. McGinnis said.

Mr. McGinnis said those who have taken advantage of the deal seem thankful for the help.

“They’re grateful. They’re appreciative, you can see it on their faces, they don’t even have to say anything,” he said.

“It makes them feel special, sort of looked after. They’re going through these undue circumstances, they’re being impacted through no fault of their own,” Mr. Merrell added. “…I don’t know how long it’ll last, but we’re doing it till it (the shutdown) ends.”

Dank Burrito may have been one of the first restaurants to offer a discount, but many others through the county have followed suit since then. Across the street at Ioanni’s Grill, owner Jeff Turnage was inspired by Dank Burrito to offer its own 50 percent discount for service members.

“It’s been pretty cool to see other people jump on board,” Mr. Merrell said.

Restaurants aren’t the only ones stepping up during the shutdown, as a number of other businesses providing a variety of services offer deals, as well.

The Big Rock Barber Shop in Morehead City will give half price haircuts to Coast Guard members every Wednesday until the shutdown ends. Owner Phillip Lovoy said a large portion of the shop’s client base serve in the Coast Guard, so he felt compelled to give back to that community.

“It’s pretty cool because when we first started, the Coast Guard were some of the first ones that came in. We were a brand new business, and they started coming back every week, and kind of kept us afloat,” he said. “We felt like it was one of those things where they helped us out at the very beginning, so it was time to help them out.”

Mr. Lovoy said one patron left the barbershop enough money to cover about 28 free haircuts for service members. He said many people don’t even know about the deal when they come into the barbershop, but they still need the frequent haircuts because of the Coast Guard’s uniform requirements.

“We’re still working, I still got to look good,” said a Coast Guardsman, who is required by the agency to remain anonymous, as he received a free haircut Thursday.

For pet owners, Mitchell Village Animal Hospital is offering free vaccines, nail trims and heartworm prevention medication, plus 20 percent off office visits to any government employee with valid ID affected by the shutdown. Owner Julianne Davis said she knows pet care can be expensive, so the discounts are one way she felt they could help out during tough financial times.

“It’s the least we can do,” she said. “You feel bad for anybody not getting paid, especially through no fault of their own.”

Ms. Davis said only a few people have taken advantage of the discounts, so far, but she hopes to spread the word to ensure pets are being cared for through the shutdown. She said even if the shutdown ends soon, she plans to offer the discount through at least mid-February to allow government employees time to get back on their feet.

Newport Mayor Dennis Barber served in the Coast Guard for 22 years and said he went through a similar situation in the 1970s when the Carter administration temporarily froze pay for some federal employees. He said he was new to the service at that time and struggled to make ends meet for several weeks, so he is sympathetic to all those who have been affected.

“We need to help them. They’re still out there doing their duty, they just aren’t getting paid for it,” he said.

Mr. Barber said he worked with the Walmart Market in Newport, through the Newport Rotary Club, to help secure about $1,700 in Walmart gift cards, as well as pallets of food, to be donated to the Crystal Coast Chief Petty Officers Association.

“It’s hard for a young Coastie out there to get money for gas and food, it’s really important to support them right now,” he said.

Some other businesses are not discounting direct services, but they are collecting items and money to be donated to families affected by the shutdown.

The Carolinas Center for Surgery will collect non-perishable food, personal hygiene products and toiletry items through the end of today at its Morehead City office. Anytime Fitness in Morehead City is also holding a donation drive, and is seeking gift cards to restaurants and grocery stores, as well as utility bill donations.

Additionally, the Chamber of Commerce’s Military Affairs Committee continues to accept gift cards and monetary donations for the CPOA, which can distribute items to Coast Guard members.

Now , they are back with back pay.

They should be paid if they actually had to work. Hard to believe that the ones that did not work will still get paid for not working.

This community needs to be thankful that DoD was not involved. That would mean at least a million dollars of lost business spread around the county.