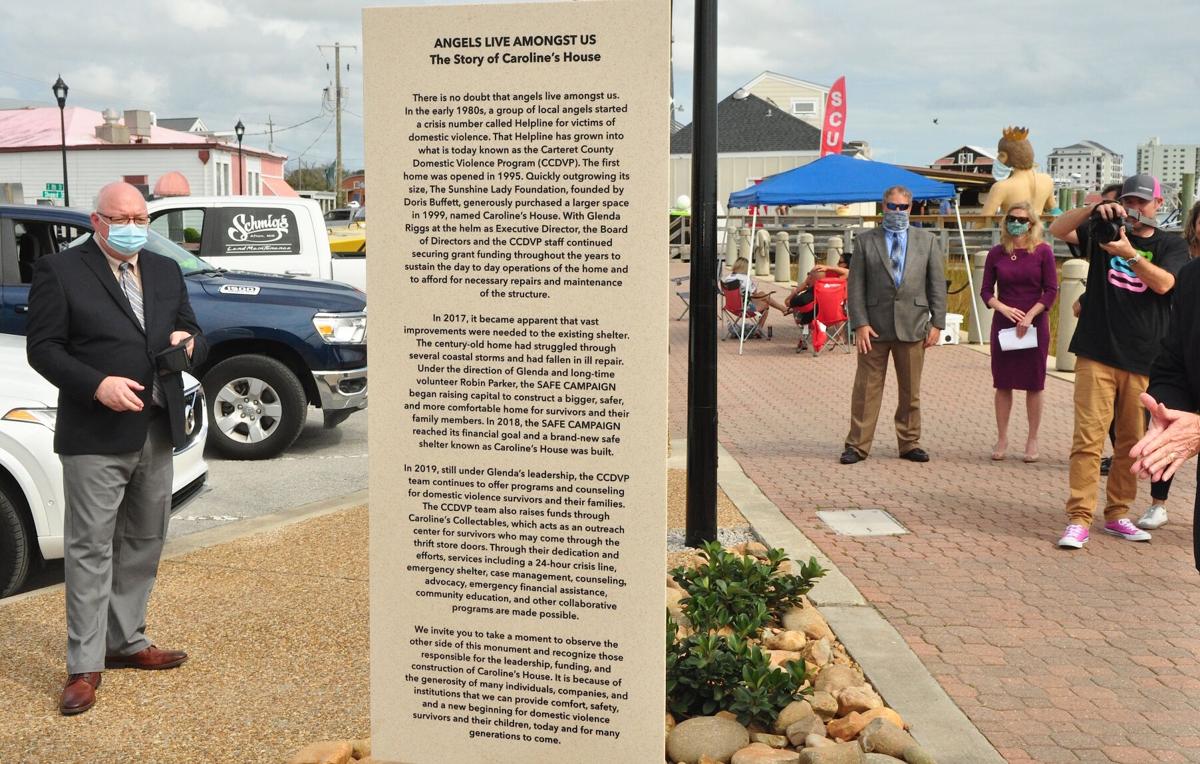 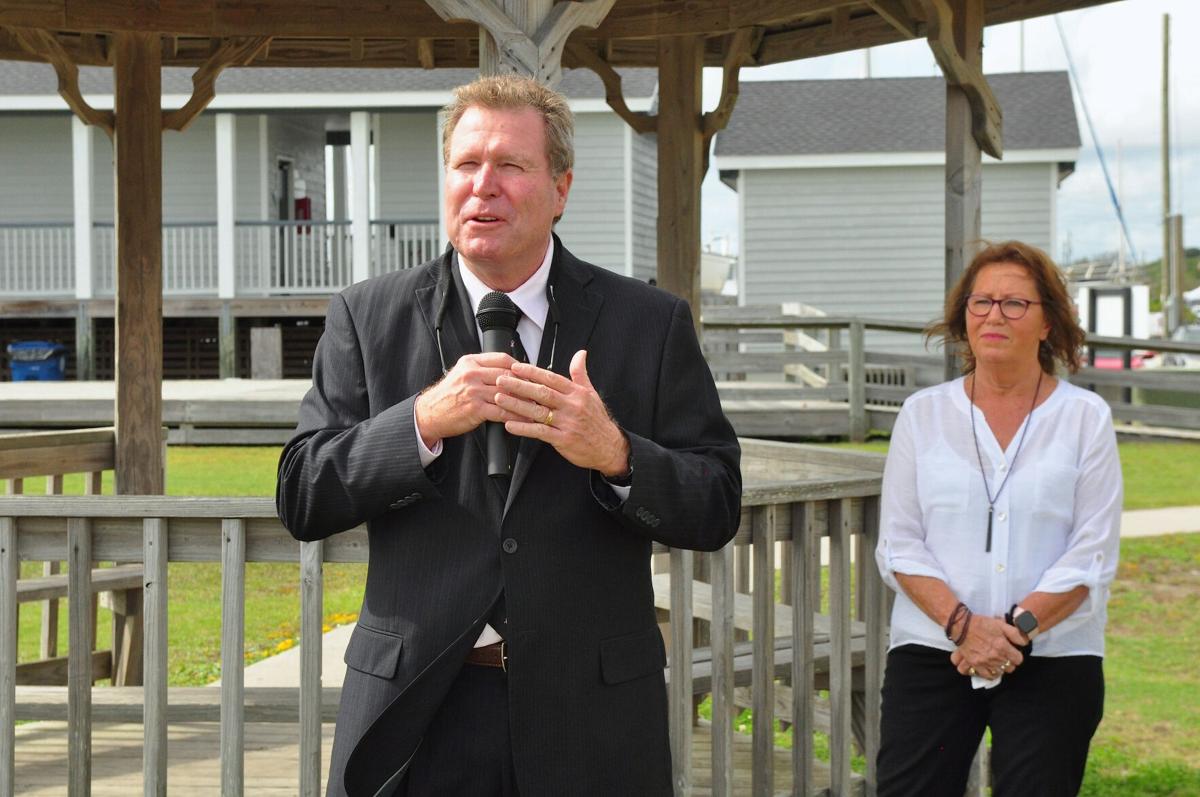 Morehead City Mayor Jerry Jones praises the work of the Carteret County Domestic Violence Program while program Director Glenda Riggs listens during a program held Thursday at Jaycee Park in Morehead City to unveil a monument in celebration of the completion of a new safe house. (Cheryl Burke photo)

MOREHEAD CITY — To celebrate those who made construction of a new safe house for domestic violence survivors possible, the Carteret County Domestic Violence Program unveiled a monument in their honor at Jaycee Park Thursday.

“On behalf of the board and staff of Carteret County Domestic Violence Program, I would like to thank each person, business organization and foundation who helped bring this dream to fruition,” CCDVP Program Director Glenda Riggs said during a brief program prior to the unveiling. “Each contribution, from the largest to the smallest, was instrumental in building Caroline’s House, and we are deeply grateful for your generosity and sense of community.”

Dale Britt, former president of the Big Rock Blue Marlin Foundation, which provided $150,000 in seed money in 2018 to kick off a capital campaign for a new safe house, said the campaign began after he visited the former house with CCDVP board members.

Mr. Britt said it was quickly apparent the former safe house, more than 100 years old, was no longer fit to serve the needs of survivors and their families.

The new house was completed and opened for clients March 26, 2019. The facility can house up to 30 people dorm-style. It’s approximately 5,000 square feet and is fully handicap accessible.

The cost of construction was more than $1 million, with many donors contributing to its completion. Robin Parker, who headed the capital campaign, recognized some of the major contributors, including Big Rock Foundation, Sunshine Lady Foundation and the State Employees Credit Union Foundation.

Ms. Riggs said after the house was finished, it took a while to work out a location for the monument, then complete the structure. Plus, things got delayed due to the coronavirus pandemic.

The 5-foot tall recognition monument has three sides, which are panels. One side contains the history of the CCDVP. A second side recognizes board members, capital campaign committee, architect-builder Tommy Glasgow and others. The third side recognizes donors who have given $500 or more.

Ms. Riggs said the new safe house has already been extensively used. From July 1, 2019, through June 30, CCDVP has provided services to 231 people in the county. The shelter housed 134 adults and 61 children during that time.

In addition, CCDVP received 417 calls to its crisis lines, provided counseling to 713 people and 108 hours in support group sessions.

“Some of us have experienced domestic violence, have a family member who has or know someone who has,” he said. “It’s here. It’s real and it’s not going away. These people opened their hearts up. Then they opened their doors and provided a haven to those seeking sanctuary from their abusive family member or husband.”

The CCDVP team continues to offer programs and counseling for domestic violence survivors and their families. Through their efforts, services include a 24-hour crisis line, emergency shelter, case management, counseling, advocacy, emergency financial assistance, community education and other collaborative programs.

Vote Mayor Jones out of office. Someone this gullible needs to go.