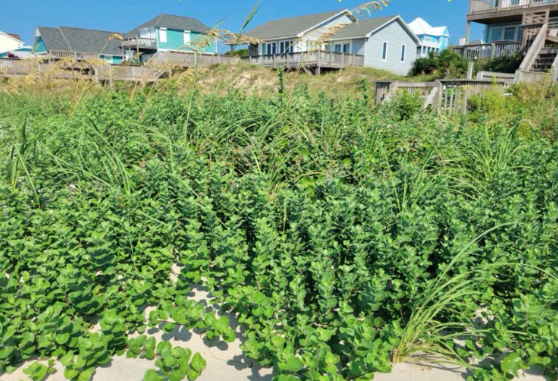 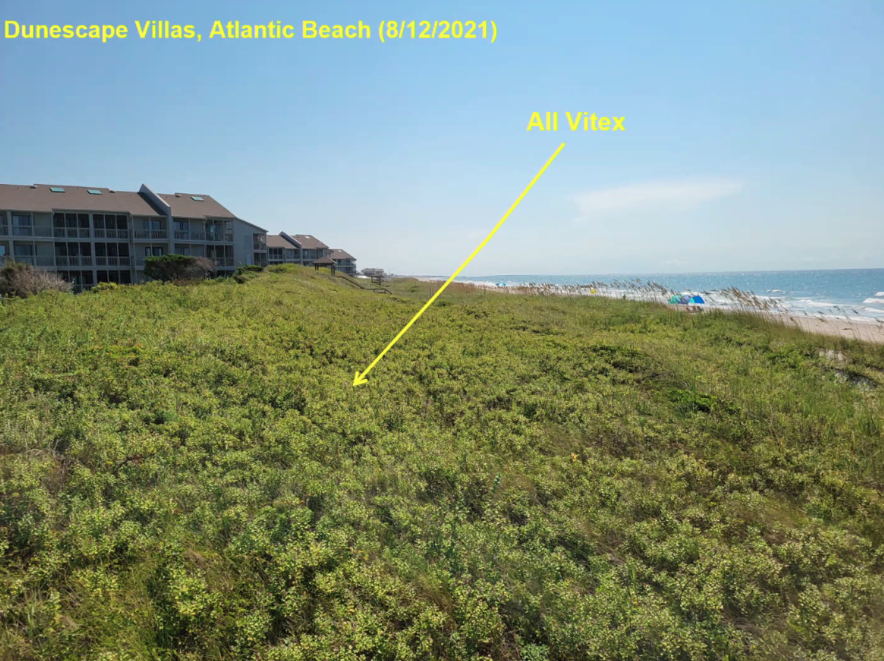 EMERALD ISLE — The Carteret County Beach Commission agreed Monday to ask N.C. State University to offer advice on how to get rid of beach vitex.

The commission acted after a presentation by County Shore Protection office manager Greg Rudolph during its monthly session in the Emerald Isle Board of Commissioners’ meeting room off Highway 58.

Vitex is an invasive plant species that is choking out natural vegetation along the oceanfront in some places along Bogue Banks.

The plant, which has purple flowers and round-ish leaves, is a low-growing perennial shrub and spreads rapidly, probably by the wind and birds dispersing its seeds. It’s dark green with woody stems in the summer and turns grey in winter.

Mr. Rudolph said there are several bad patches on the island, probably the worst is in the dunes at Dunescape Villas in Atlantic Beach.

In Emerald Isle, there are large patches in the dunes at 7025 Ocean Drive, 12th Street and Ocean Drive. Smaller patches can be found in many other places.

According to the National Invasive Species Information Center of the U.S. Department of Agriculture, in addition to crowding out native sea grasses, like sea oats and bitter panicum – both used at a relatively high cost in the county’s beach nourishment projects to stabilize dunes – vitex can destroy sea turtle nests.

Mr. Rudolph said it’s very difficult and time consuming to get rid of the plant. The most effective method is to pull it up, roots and all, which isn’t hard to do because the roots are shallow in the sand, but it takes many hours to clear large patches. Other methods suggested by experts are to shade it so it dies or to gently scratch the stems and dab the scratches with herbicide.

All of the Bogue Banks towns have ordinances against planting vitex, Mr. Rudolph said. The question is what to do about the existing patches. At one time, he said, there was a N.C. Sea Grant task force set up to deal with the issue, but it has disbanded.

One problem is beach vitex, like kudzu, does what it’s supposed to do – hold sand or dirt in place – so it’s difficult to convince private property owners to remove it manually or let others do it, he continued. For the county or state to do it, officials have to get permission and easements to work in private property, which extends to the high water point on North Carolina ocean beaches.

Property owners, Mr. Rudolph said, are likely to decline, as the plant is holding up the dunes.

Beach commission Chairperson Jim Normile was the one who suggested Monday the county contact NCSU, known for its expertise in agriculture and related issues, to help come up with an eradication plan.

County Commissioner Jimmy Farrington, who also sits on the beach commission, wondered if it might be possible to cover the vitex patches with tarp and shoot gas in to kill the plants.

“I will outreach to NCSU,” Mr. Rudolph said as the discussion ended.

Mr. Normile said it would be interesting to get some professors and students to come to Bogue Banks, look at the problem and “get their take” on what the county and property owners could do.

So , this vitex does a good job of holding the sand dunes in place which is good . It protects structures from being damaged by the storm waves , which is good . The dense root mat supposedly traps the baby sea turtles under the sand when they hatch and that is bad even though it part of nature’ way . This is assuming that vitex is normally found here abouts and not transplanted from afar .

The easiest way is to recruit some trustee prisoners , give them a day or three at the beach and pull the vitex up with the roots intact and burn it . Pretty cheap way to get it done but certainly unpalatable to the clientele of beach goers prized by the towns . Certainly beats hosing it all down with Roundup .

Pretty much a scenario where you have to pick your poison and live with it .

The turtle folks / red knot folks could patrol the area and remove any offending vitex as well . More purpose for their lives .

This is an abysmal display of leadership... has no one if looked at what the UDSA.

Typically, it takes about 10 years of persistent herbicide applications to eradicate kudzu. The USDA developed a series of effective management programs that can substantially reduce kudzu over one- and two-year periods.

I guess these guys are just showing up ehh? Just thinking out loud...?

The USDA applied four different herbicides, individually or in combination, and a bioherbicide treatment at three different kudzu-infested sites. (A bioherbicide is a biologically based control agent for weeds.) He repeated these treatments for two years. Results showed a high level of suppression on the small plots after just one year. An even higher percentage of kudzu—99 to 100 percent—was killed during the second year.

The organic treatment, which simultaneously established native vegetation, killed 91 percent of kudzu after one year and 95 percent after two years. The treatment involves applying a bioherbicide application, mowing and revegetation.

But hey lets spend that occupancy tax money to study things that have already been studied!!!!

Do you mean that someone in that office might take the time to do some research ? Far easier to reach out to a consultant , pay them to do what you should be doing , plus it ultimately gives you plausible deniability should things not work out .

Deniability is beloved by all governments , large and small .

Two years ago, my wife contacted Mr. David Pearce, Department of Agriculture, New Bern. He works in the office that deals with invasive plants. His office came to Morehead City and sprayed the plants at the end of 20th Street on the sound. The spraying basically killed the greenery, however, it did nothing to the root system. The statement that the roots can be pulled up easily is correct....if you're using a backhoe. My wife and several other residents that utilize the beach area on 20th Street worked about two weeks trying to remove the roots. The vitek is a fast growing plant that roots about every three feet, making it almost impossible to pull them up manually. Spraying, burning, etc. may eventually work, but if you want to get the entire plant up, a heavy piece of machinery is a necessity.

The stuff is in the sand . How difficult can it be ?