NEWPORT — Sales tax revenue has been distributed in Carteret County based on where the taxes are collected for around 20 years, but at least one town official says it needs to change.

Carteret County receives sales tax revenue from the state, which distributes its revenues among the 100 counties by a method called ad valorem. This means a given county’s share of the sales tax revenue is determined by how much sales tax was collected in that county in a given year. 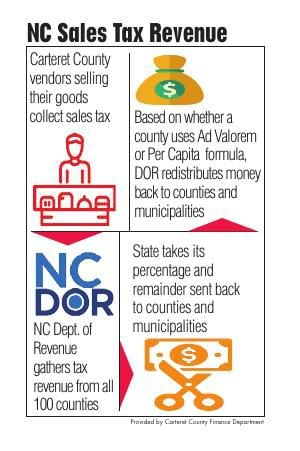 Carteret County Manager Tommy Burns said in an email to the News-Times March 4 the ad valorem distribution method has been used in this county at least since the 1990s “and probably longer.”

“Last fiscal year (2018-2019), the amount of sales tax distributed to the county and its municipalities was $28.54 million,” he said. “Of that amount, Carteret County government received $18.3 million, with $16 million for the County’s General Fund, and $2.3 million allocated to special taxing districts, such as Fire and EMS taxing districts.”

“This is required for (the) ad valorem basis of distribution,” he said, “and is not for per capita distribution. These fire and EMS districts would require property tax increase if $2.3 million sales tax revenue was unavailable. Special taxing districts have maximum property tax rates allowed, and the county would not be able to set a tax rate high enough to offset the revenue shortfall for some of the districts.”

For this reason, Mr. Burns said he wouldn’t recommend changes to the method of sales tax distribution to county commissioners.

“The revenue loss to Fire and EMS agencies would be devastating,” he said.

Not everyone seems to agree with Mr. Burns, however. In the western mainland region of Carteret County, Newport town officials have been saying at multiple public meetings a change to the per capita method would be very beneficial for the town.

Former Newport Interim Town Manager Chris Turner, who has now been replaced by permanent Town Manager Bryan Chadwick, said in an email to the News-Times March 5 the county’s business communities “continue to signal passionately that the current lack of workforce is the most critical and immediate impact to their sustainability.”

“We have reached a ‘must act threshold,’” Mr. Turner said. “When we ask the question ‘why are we unable to attract and sustain a workforce of adequate capacity to service our businesses?’ the critical factor in that answer points to inadequate sales tax distribution across our three larges municipalities, who carry the lion share of our existing in-count workforce.”

The three municipalities with the highest full-time populations in Carteret County are Morehead City (9,481), Newport (4,757) and Beaufort (4,221), all mainland towns. Mr. Turner said these are where housing, shopping, services and “generally all commerce” tends to occur.

“To sustain and properly grow those local workforce bastions requires a proper change in distribution method to per capita,” he said. “The current distribution method rewards seasonal housing populations who are not permanent residents and critically handcuffs our permanent population centers that constantly maintain our service and tourism-based economy.”

“Without a redress of the tax distribution method, the permanent harm to our economies will continue to deepen beyond repair and choke sustainable/smart growth for all of our communities,” Mr. Turner said, “to include our shorelines. An earnest discussion across all stakeholders and, more importantly, action to evidence is needed.”

News-Times staff reached out to Morehead City and Beaufort officials as well.

Beaufort Town Manager John Day said in an email March 4 he hasn’t seen a calculation of Beaufort’s sales tax revenue share that compares per capita distribution to ad valorem, so he couldn’t comment.

Meanwhile, Morehead City Director of Finance Jewel Lasater said she “cannot speak to the opinions or desires of the (town) council” regarding the best distribution method to use. However, she provided a link to the N.C. Department of Revenue’s website, ncdor.gov, where a report on revenue distributions from December 2019 was available, which showed what the percentage share would be for municipalities and the county under either the ad valorem or per capita methods.

According to the December 2019 report, sales tax revenue shares under the ad valorem method were as follows:

If revenues were distributed per capita, the shares would have been as follows:

Atlantic Beach Town Manager David Walker said in an email March 5 that Bogue Banks and its beach towns “are a magnet for tourism and economic (growth) for Carteret County.”

Mr. Walker also said the Bogue Banks municipal governments serve 32% of the housing units in the county, while the seven mainland municipalities serve 26%. He said the change sought by Newport officials would “result in huge disparities,” including Newport’s sales tax distribution share becoming three times more than Atlantic Beach and both Peletier’s and Bogue’s shares increasing more than 1,000%.

“Sales tax is the second-largest revenue providing in our General Fund after the property tax,” he said, “therefore it supports all town services except the water utility. We would have to raise our local property taxes to the amount lost by a change of distribution method.”

“The town would not support a change in the distribution system,” he said. “Doing so would result in an estimated reduction of 92% of our sales tax revenue, which equates to almost nine cents in property taxes.”

Property taxes in Carteret County are calculated by multiplying a given town’s tax rate by every $100 of the property value of a given taxpayer’s real property.

In Pine Knoll Shores, Mayor Ken Jones said March 4 that he, too, is in favor of keeping the ad valorem method.

“If you do per capita, you don’t take into account the part-time residents,” he said. “Seventy percent of our property owners are out of town…If we don’t have that (sales tax revenue), we’d have to cut back with fire protection, police protection and beach protection, too.”

Mayor Jones said using any method other than ad valorem to distribute sales tax revenue “isn’t realistic” and “doesn’t take into account the way our economy’s based.”

News-Times staff also reached out to Emerald Isle officials, however, they couldn’t provide a response before press time.

This is such an important issue and one that needs to be addressed. Newport, MHC and Beaufort (which includes Down East) have struggled for years w/o enough money while the beachside towns have benefited. It's not just the tourists who pay sales tax and it is about time that year round residents are taken care of.

IMO , when a residential building is rented it ceases to become a residence and becomes a business . Just like any other hotel and motel . The same fees and taxes apply . When it comes time to redistribute the sales tax money , those structures should not be counted as residences . That would free up a ton of money for the other areas . Sadly , the folks that would make that happen usually profit from the way things are . Fighting city hall and all that is daunting and often requires aggressive legal action , with no guarantees expressed or implied . Need someone to be with you all the way .