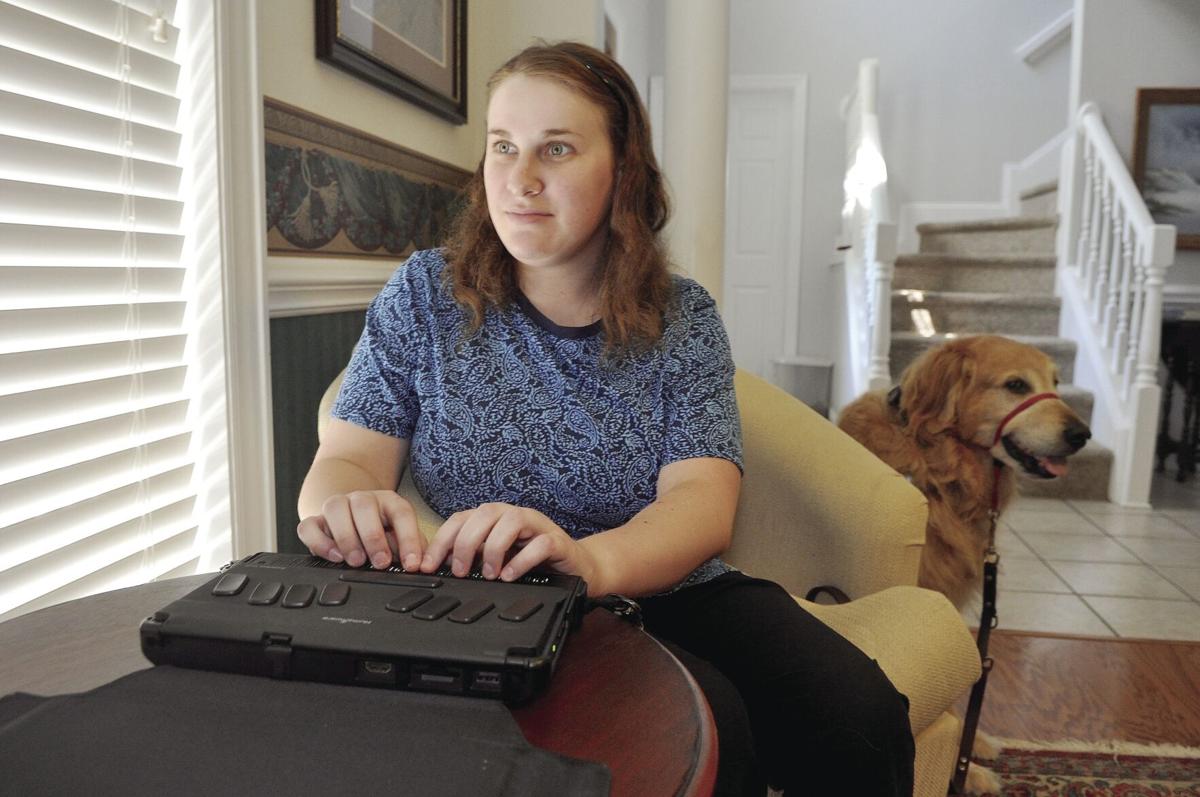 Grace Minter of Morehead City, who is legally blind, reads with the help of a Braille notebook as she sits next to her leader dog, Stormy. She just graduated valedictorian and will begin her teaching career in August at Governor Morehead School in Raleigh. (Cheryl Burke photo) 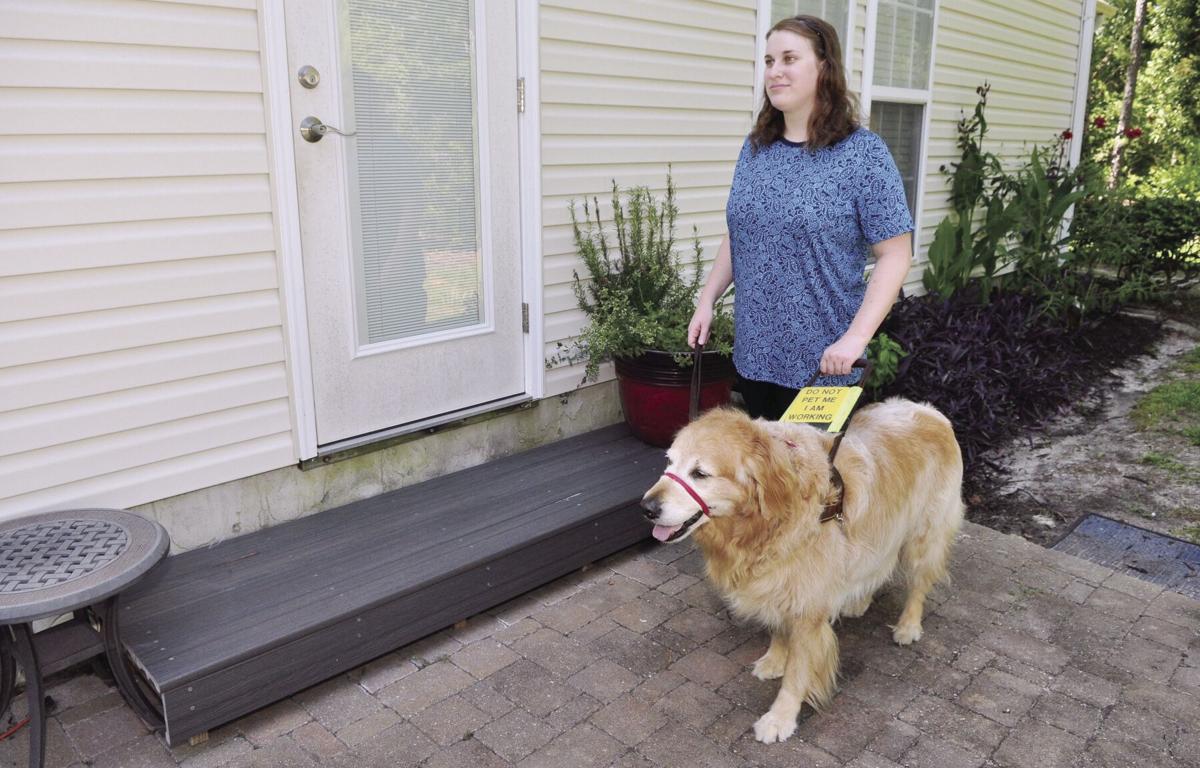 Grace Minter, who is visually impaired, walks with her leader dog, Stormy, at her home in Morehead City. She recently graduated as valedictorian from Mid-Atlantic Christian College in Elizabeth City. (Cheryl Burke photo) 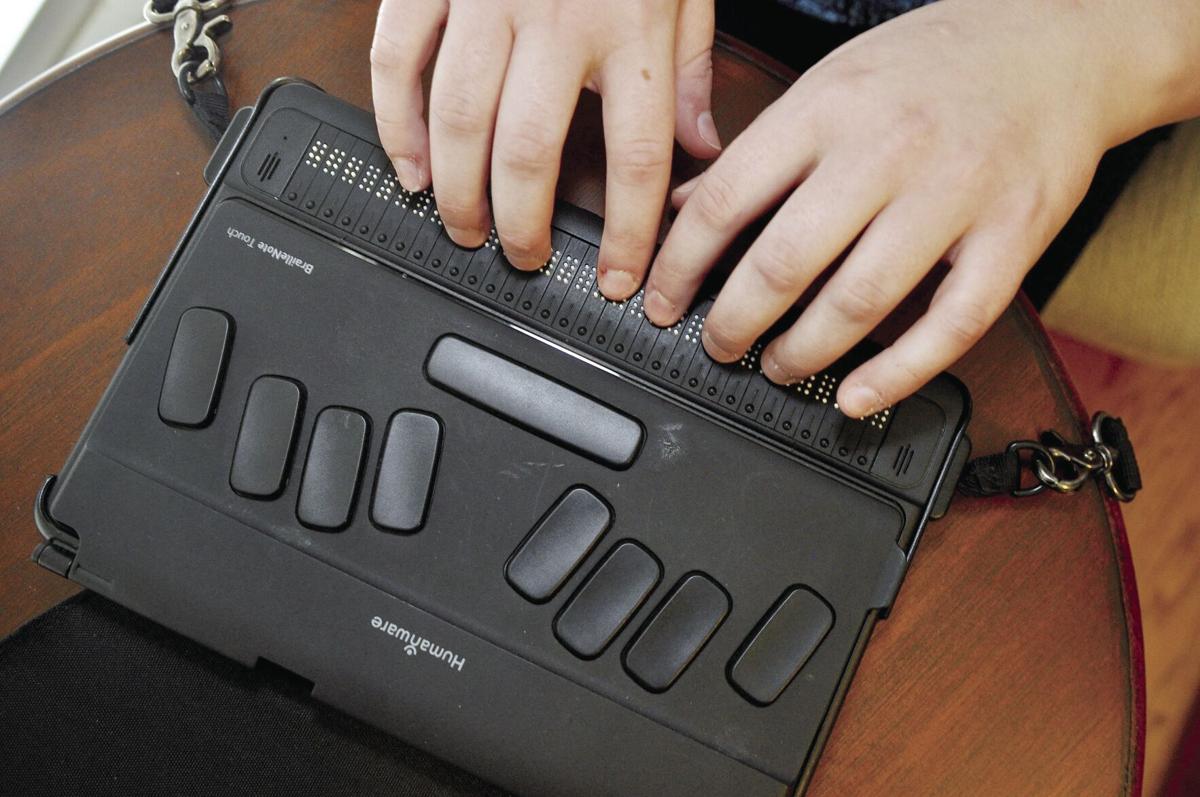 Grace Minter of Morehead City, who is legally blind, demonstrates how she uses a Braille Note Touch to read books. (Cheryl Burke photo)

MOREHEAD CITY — One visually impaired college graduate and her leader dog have demonstrated that with faith and hard work anything is possible.

Grace Minter, 25, born legally blind, graduated with a 4.0 grade point average as valedictorian in May from Mid-Atlantic Christian College in Elizabeth City. By her side throughout her college career has been Stormy, a male golden retriever she received from Leader Dogs for the Blind.

“He definitely increases my independence. I couldn’t have gone to college without him,” Ms. Minter said in late July as she sat at home with the 7-year-old canine watching her every move.

In addition to graduating with a teaching degree at the top of the class, Ms. Minter is a finalist for North Carolina Student Teacher of the Year after being recognized for the honor at her college. She and the other finalists will be honored at a ceremony in September, where the announcement for the state winner will be made.

Ms. Minter had hoped she and Stormy would be able to participate in an in-person commencement exercise in August at her college that had been postponed due to the coronavirus pandemic, but the graduation was recently canceled.

“I was disappointed and was hoping to give a valedictorian speech, but it’s OK,” she said.

While she won’t experience the praise of her fellow graduates during commencement, she receives constant encouragement from her favorite supporter, her father, Craig Minter.

“I couldn’t be more proud of her,” Mr. Minter said. “Honestly, she is just amazing Grace — she always has been. When you have a disability you have to work that much harder. It takes a strong will and perseverance. She just perseveres through whatever challenge comes along. She will not be defeated.”

Ms. Minter received her bachelor’s degree in elementary education, with a minor in Bible. She landed a teaching job beginning in August at Governor Morehead School in Raleigh, which serves visually impaired students in a residential setting.  Stormy will remain by her side.

Ms. Minter will be teaching Braille literacy to students in grades kindergarten through 12.

The determined young woman said she has a message to share with not only her students, but with anyone facing disabilities or other difficult challenges.

“You can still accomplish your goals, you just have to find a different way of doing it,” she said. “I want my students to see that if I can do it, they can do it, too.”

Ms. Minter said one of her favorite quotes is from the late Helen Keller, who was deaf and blind and was responsible for many advancements for those differently abled.

“She said, ‘A true test of character is facing hard conditions with the determination to make them better.’ That’s my motivation for being a teacher. I want to empower children to realize they can do so much more than they think,” she said. “Instead of blaming external circumstances, you can say I acknowledge it’s a factor, but I choose to grow above that.”

Ms. Minter has personified her message throughout her life. A graduate of West Carteret High School, she chose as her senior project in 2014 to help train leader dog puppies by working alongside Tom Snively of Morehead City, who helped raise and train puppies for the Leader Dogs for the Blind school in Rochester Hills, Mich.

“One of the dogs I helped train was later paired with a visually impaired woman in Spain,” she said.

Ms. Minter’s love for her current dog Stormy is evident, and the faithful canine is an important part of her everyday life. She was matched with the dog the summer prior to entering college.

“I had to go up to the Leader Dogs for the Blind in July and spend one month working with Stormy to make sure we were matched correctly and that I understood how to handle the dog correctly,” she said.

Ms. Minter added that once a visually impaired person is matched with a leader dog, it’s continual training for the remainder of their lives.

“It’s not just taking care of him, but you have to keep reinforcing his skills,” she said. “The dog is only as dedicated as you are. So it takes a lot of commitment.”

For example, she said leader dogs are trained to constantly look down, left and right to help their owner navigate around obstacles and remain safe before crossing streets. However, Ms. Minter said she is still working with Stormy on watching out for items above her head, like overhanging tree branches.

“I’ve walked into more than one tree branch. If he makes a mistake, I have to stop, make him understand the problem and make him do it until he gets it right,” she said. “It’s a continual learning process.”

Stormy became quite campus savvy when the two were at college, Ms. Minter continued. At the beginning of each semester when she received her new class schedule, Ms. Minter and Stormy would review the routes to each class and she would repeat the name of the class to her dog as they learned the routes.

“After that all I would do is say the name of the class and he knew where to take me,” Ms. Minter said.

When she was in class, Stormy would lay at her feet. While fellow students wanted to pet Stormy, Ms. Minter said people should not pet a working dog while they are doing their job.

“When his harness is off and he’s at home he can be a regular dog,” she said. “But as soon as that harness goes on, he knows he’s on duty and his whole attitude changes.”

As well as having her dog for assistance in classrooms, Ms. Minter is equipped with special computers and notebooks that enable her to read Braille. She can also listen to books audibly with the assistance of technology.

As well as beginning her teaching career, Ms. Minter has created a website to promote family literacy and encourage children to overcome challenges. To learn more about Ms. Minter and her mission, visit theblindbibliophile.com.

Grace is obviously an exceptionally talented young lady who will go far in life. Interesting information about leader dogs and especially her wonderful Stormy. Thanks for an all-around educational story.

A true inspiration. What a wonderful and brave young lady. I enjoyed reading her story!