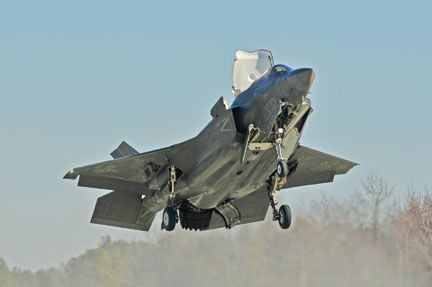 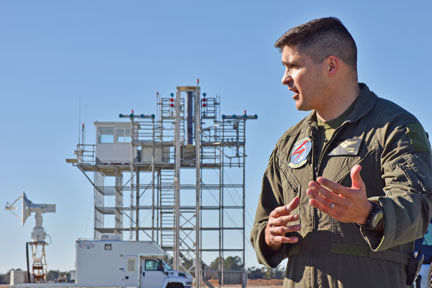 Testing at MCALF Bogue, which media were invited to observe Friday, focuses on the landing capabilities of the F-35B on sloped surfaces. Maj. Mike Lippert with the VX-23 aviation unit in Patuxent, Md., said the goal of testing is to “expand the vertical landing envelope.”

Test landings at MCALF Bogue will be conducted on sloped landing pads of various gradients constructed at the airfield.

Bob Nantz, technical specialist for the F-35 Integrated Test Force based in Patuxent, Md., said the F-35B is designed to operate from austere bases and air-capable ships near combat zones. Because the plane lands vertically and requires only a short runway for takeoff, it is ideal for amphibious ship decks.

Testing at MCALF Bogue is part of a larger series of extensive tests for the aircraft. Maj. Lippert said they are conducting about 200 test points for the F-35B. Test points use different combinations of environmental and takeoff/landing conditions to discover the plane’s range of capabilities.

The F-35B is capable of taking off and landing from expeditionary runway matting, which Marines can use to construct airfields virtually anywhere in the world. The entire airfield at MCALF Bogue is just such an expeditionary runway, constructed of aluminum panels that can be disassembled and reconstructed at different locations.

Maj. Lippert said the airfield at MCALF Bogue is a unique testing location because the expeditionary landing field and the landing pads were constructed entirely by Marines. He said everyone involved in the testing operation has gained valuable experience that can be applied to the field.

Gunnery Sgt. Julio Silva led the effort in constructing the sloped landing pads used in the F-35B testing. The pads are constructed of the same aluminum panels as the rest of the runway. He said it was laborious process that included stabilizing and grading the soil and laying down each panel by hand.

Testing at MCALF Bogue is expected to last through the end of February. Residents nearby in Bogue and Emerald Isle can expect to increased noise from takeoffs and landings of the F-35B.