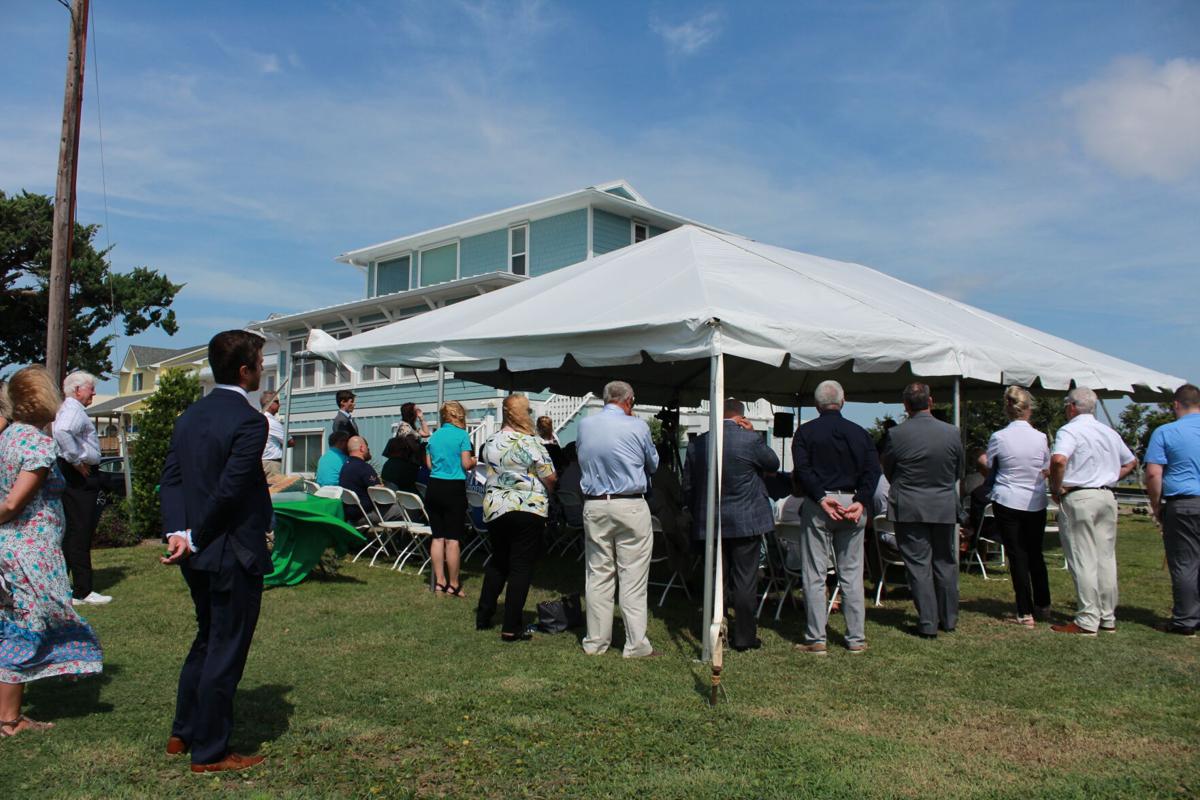 Officials gather at a home in Atlantic Beach, seen in the background at 1717 E. Fort Macon Road, for a ceremony marking it as the nation’s 30,000th designated FORTIFIED Home. Homeowners James and Trish Moss took advantage of a grant program, Strengthen Your Roof, to help pay for the installation of the new resilient roof. (Elise Clouser photo) 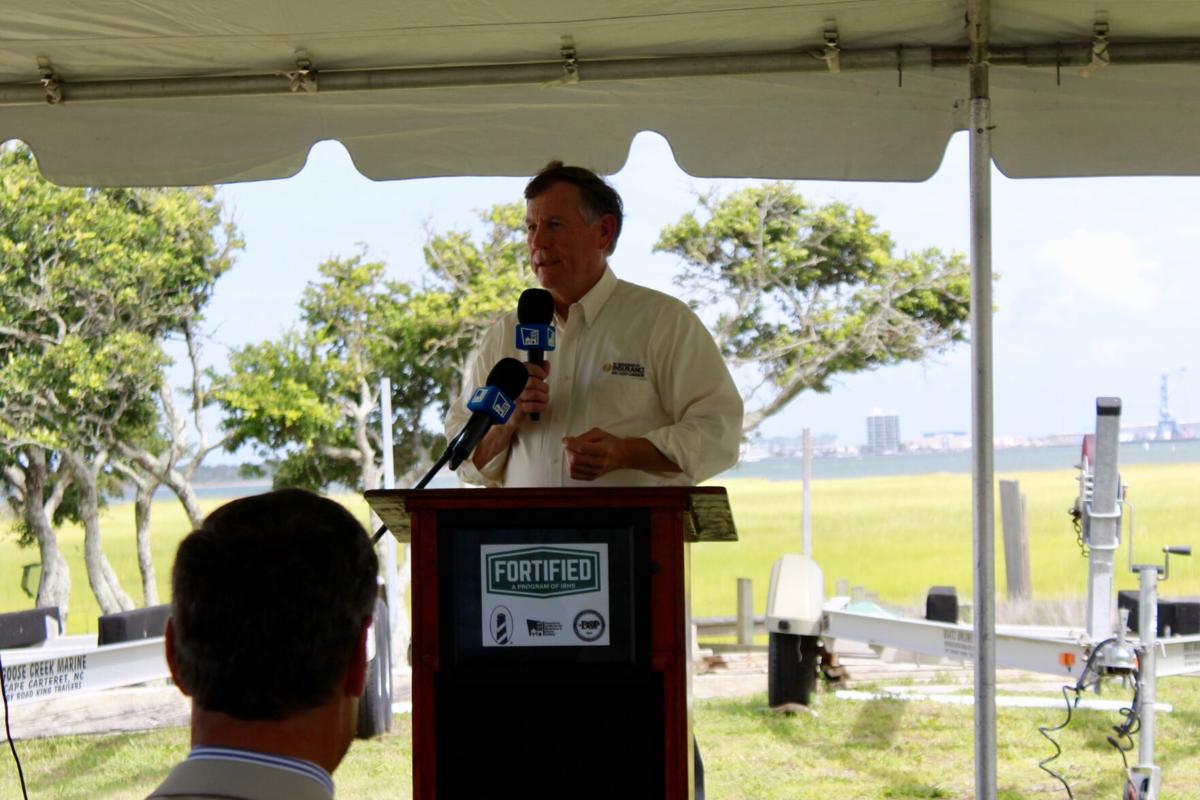 ATLANTIC BEACH — A home in Atlantic Beach became the nation’s 30,000th to receive designation as a FORTIFIED Home for its participation in a grant program that helps homeowners pay for the installation of hurricane-resilient roofs.

Officials from multiple organizations, including the Insurance Institute for Business & Home Safety (IBHS), which confers the FORTIFIED designation, as well as the N.C. Department of Insurance and the N.C. Insurance Underwriting Association (NCIUA), gathered Wednesday morning for a ceremony marking the milestone at the home, 1717 E. Fort Macon Road. A luncheon followed the event at the Dunes Club in Atlantic Beach.

The homeowners, James and Trish Moss, were not present for Wednesday’s event. A representative accepted the plaque certifying the home is up to FORTIFIED standards on behalf of the couple.

Based on research by IBHS, the FORTIFIED Home program is a voluntary set of above-code design, building and retrofitting steps that strengthen homes against severe weather. According to the organization, it has shown in lab research and during real-world events to reduce wind damage and prevent water intrusion during a storm.

“When it comes to construction, everything starts with the North Carolina building code, so that’s the foundation,” Roy Wright, president and CEO of IBHS, told the News-Times. “But what we’ve learned as we deal with roofs particularly, there’s a set of actions that, when you take them, allow you to be able to withstand up to 135 mph winds.

“When roofs stay intact, it allows you to move back into your house. Even if you lose some shingles in the process, if you have that sealed roof deck, you don’t get water intrusion,” he continued. “The biggest driver of cost and delays in moving back into a home after a storm is water coming through the roof because at that point, in a humid season, you’re dealing with mold and all kinds of other damage.”

Atlantic Beach Mayor Trace Cooper kicked off the ceremonies Wednesday by acknowledging recent severe weather in other parts of the country from Hurricane Ida. He said the recent events underscore the importance of programs like FORTIFIED Home.

“It’s not a matter of if the next storm hits, it’s a question of when,” he said. “But there is some good news coming out of the Gulf Coast, and that good news is that the resiliency efforts that have been made down there are working.”

Mr. Causey highlighted a pilot program operated by NCIUA and endorsed by his office known as Strengthen Your Roof that offers grants to help homeowners pay the cost of installing or retrofitting a roof to meet FORTIFIED standards. Eligible policyholders can receive up to $6,000 through the grant program to help offset costs of installing a new roof.

“We’re trying to reach out to the public and make people aware of this grant program because the more people that know about this, the more people that take advantage and strengthen their roofs, the better we are,” Mr. Causey told the News-Times following Wednesday’s ceremony. “It’s just such a tragic thing after a hurricane or tornado to see a total loss in a house when it could have been prevented by a few extra nails and clips on the roof.”

In North Carolina, the Strengthen Your Roof program is only offered to homeowners on the Outer Banks or other barrier islands, including Bogue Banks. However, Mr. Causey said the program is looking to possibly expand to cover other areas in the future, and he encourages even those who aren’t eligible for the grant to consider a FORTIFIED roof or other resiliency measures that make their home better able to withstand severe wind and rain.

“My key word is ‘quality.’ It may cost a little bit more to buy the best quality materials, but it pays big dividends when there’s a storm,” he said.

Based on figures provided by the NCIUA, the average cost to install a roof built to FORTIFIED standards under the grant program is about $11,200. Since it was introduced in 2019, 162 homes in Carteret County have received some amount of grant funding through Strengthen Your Roof. The program is available on a first-come, first-served basis and is currently accepting applicants for this year’s pilot program through Dec. 31, or until all available funds have been awarded.

“This bipartisan legislation ensures that state-based disaster mitigation grants, including those from insurers like NCIUA, receive the same federal tax exemptions as federal mitigation grants and help provide greater incentives for homeowners to take action to protect their homes from natural disasters,” Mr. Causey said in a news release issued at the event.

For more information or to see if your home may be eligible for the Strengthen Your Roof program, visit strengthenyourroof.com.

All the suits pat each other on the back and the contractor gets no credit, typical.

Looked into this . $11,200. Is way down on the low end to do a proper retrofit . If you can get the proper materials and folks that know what they are doing . Usually imported from out of state at a sizable cost . New construction is oh so much easier .

The Fortified Program is excellent program based on engineering and real word experience. I have served as an Evaluator in hundreds of these re-roofing projects and numerous new construction projects which is the ideal situation but everyone is not in a position to build new. A significant number of these projects use local contractors and roofers.

Grants from NCIUA and reduced wind and hail rates for Certified homes have expanded the Fortified Program in NC.

If it is so wonderful , why are so many new subdivisions not engaged in this ?

Retrofitting a single story roof with no jogs or offsets is about as simple as it gets . How many of these are being built these days ? When retrofitting properly , siding removal and a complete re-sheeting of the roof is often required for flashing and strength to hold the metal roofing in place . Hopefully heavy gauge standing seam with robust tie downs . Financial aid is not available to all , means testing and all that . Then there is the issue of competent contractors to do the job . This area is full of local experts who claim “ combined experience “ but are pretty much clueless on the job site . If you can get them there and they will stick around to complete the job . House down the road has been partially reroofed for over 9 months now with no end in sight . Have not even touched on the local inspectors yet .

No , think I will pass on this one . Cheaper to pay the premiums .

I hope the public doesn't take advice from someone who has opinions but no facts.

The primary reason many new homes don't participate is that sadly the Contractor is penny wise and dollar foolish. Most owners would prefer a lower insurance rate and a more resilient structure even with additional cost if given the opportunity but when Contractors refuse to offer the option because they don't what a trained third party reviewing their work everyone loses. With re-roofing owners in high risk areas are offered free significant cash grants to use premium products and methods which saves the insurance company and Owner during future storms. The Owners I deal with daily are excited that their insurance provider is willing to help pay for their new roofs.

Which insurance providers pony up this cash ? You mean the folks that insure the roofs in NC ? That state agency ?

You are quite correct about contractors not wanting someone that might know what to look for examining their work . The new subdivisions are full of them and not an extra brace or nail is used . Inspectors are largely a joke , if they even show up . A lot of times a failed contractor looking for a paycheck seldom going above or below the decking .

No experience , ok , lived here since 1982 . Been through every storm that came by . Lost 2 tabs on one shingle during that period with the exception of a green pine cone breaking the outside glass of one skylight . This home was built by a real builder who spoke English , by the way . Now saying that , all heck will break loose with the next storm . Such is life .