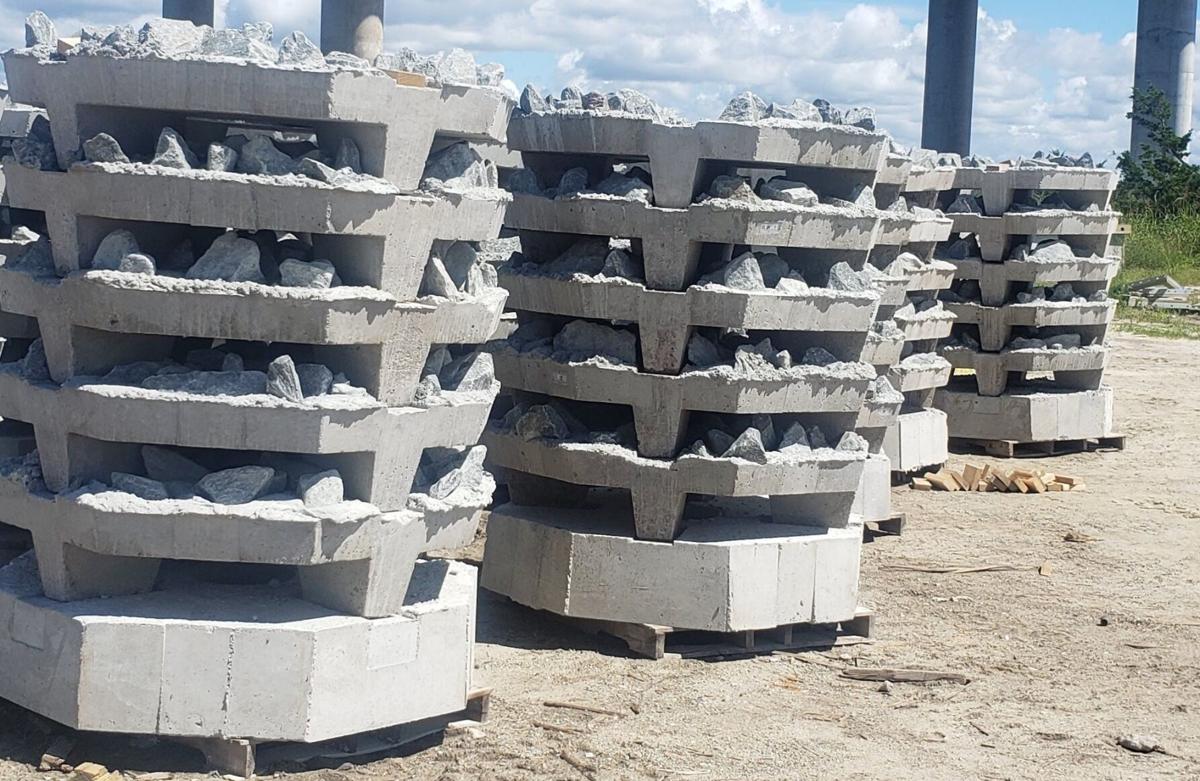 Some of the 30 wave attenuators await placement in Core Sound off White Point recently. (Contributed photo)

Contractor TD Eure of Beaufort began the process of installing attenuators to limit the energy of waves that go through fish passages left in a rock sill around White Point in Core Sound, just offshore from the harbor.

Greg Rudolph, manager of the Carteret County Shore Protection Office, said in an email Friday, “construction of the granite sill is complete, and TD Eure is working on grading the dredge spoil at White Point.

“It’s all looking really, really good,” Mr. Rudolph added. “The first piling (for an attenuator) has been sunk as a test run.”

Eventually, there will be five attenuators at each of the six fish passages through the granite sill. The attenuators fit like lollipops into a circular sleeve and are clamped into place.

Once that work is complete, the N.C. Coastal Federation, which is paying for much of the project through a $1.1 million grant from the National Wildlife Federation, will put in thousands of marsh grass plants to further impede erosion of White Point, which protects the harbor from sedimentation and wave energy.

The coastal federation, an environmental group based in the Ocean community off Highway 24, funded about half of the project because the rock sill and marsh grass – cordgrass and possibly needle rush – will provide habitat for juveniles of many marine species, including oyster larvae, which attach to rocks.

The shore protection office has sought permits for the complicated project and guided it through planning stages and years of discussion of what should be done to make the Down East harbor safe and useable by commercial fishermen and other boaters for the foreseeable future.

Mr. Rudolph said the budget for the project is $2.115 million, and since the state also contributed funds, the county’s share of the total cost should be about $200,000. The county has a contract option and a grant extension to dredge the harbor itself, but officials have not determined whether that is necessary.

The county awarded the contract to T.D. Eure in March and work began in mid-April.