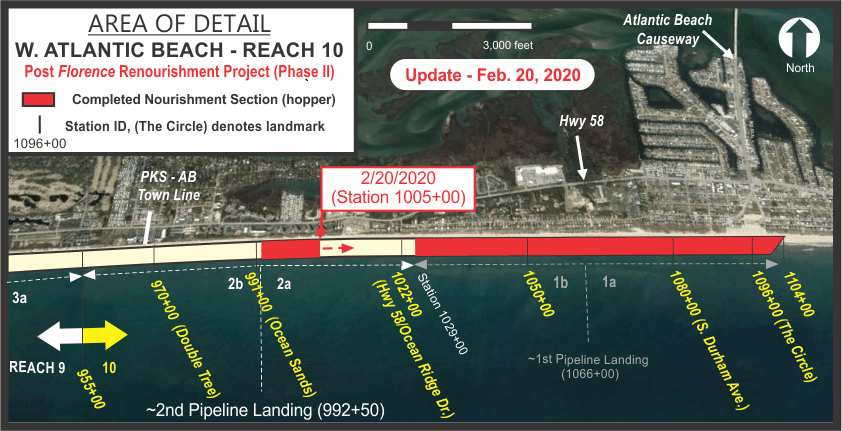 This Carteret County Shore Protection Office graphic shows the progress of the beach nourishment project in Atlantic Beach as of Friday morning. 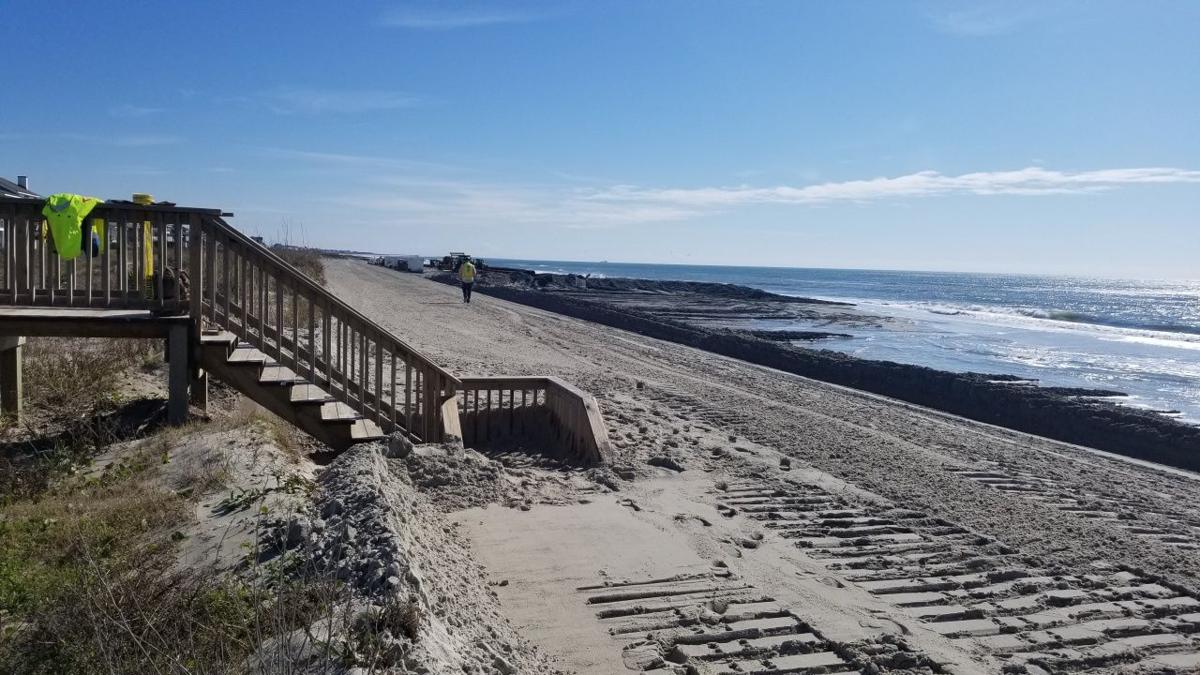 The beach in western Atlantic Beach is getting wider and the dunes are being bolstered to add storm protection. (Carteret County Shore Protection Office photo)

This Carteret County Shore Protection Office graphic shows the progress of the beach nourishment project in Atlantic Beach as of Friday morning.

The beach in western Atlantic Beach is getting wider and the dunes are being bolstered to add storm protection. (Carteret County Shore Protection Office photo)

The stoppage was the first since the project began in earnest Feb. 8 after a test run Feb. 6. When work resumes Saturday, the project will continue moving east from Ocean Sands back toward the previous east-to-west stopping point near the intersection of Ocean Ridge Road and Highway 58.

Once that section is complete, work will begin in the far western end of Atlantic Beach, then move into Pine Knoll Shores.

The contractor, Great Lakes Dredge and Dock Co. of Illinois, works 24 hours a day, seven days a week when not stopped for resupply or inclement weather. The company has about 60 people working on the project, including those on the beach and on the vessel or ancillary equipment.

The project also involves trawling in front of the dredge vessels to see if there are any sea turtles or other threatened species around. As of Friday, Mr. Rudolph said, the Lady Susie II has relocated two sturgeon but no turtles. The vessel is averaging 35 trawls per day, all in an effort to comply with environmental regulations and avoid work stoppages.

“The average (sand) haul by the Liberty Island has been 4,600 cubic yards,” Mr. Rudolph said. “The reported capacity is 6,540 cubic yards, but that’s really just in terms of space. Density is a different issue entirely.”

He said the vessel has been averaging six to seven loads per day, steaming to the sand borrow site off Atlantic Beach, then to the pipelines that carry the sand to the beach. Once connected to the pipeline, Mr. Rudolph said, it’s been taking the Liberty Island an average of 51 minutes to discharge its load to the beach to be spread by bulldozers and other equipment.

At some point during the Pine Knoll Shores work, Great Lake’s larger vessel, the Ellis Island, with a capacity of 15,000 cubic yards, will join the effort.

The entire project, including widening the flat recreational beach, bolstering dunes and planting vegetation, is to cost $28.2 million.

The final segment of the project, in Emerald Isle roughly from the Land’s End clubhouse to just east of the Western Ocean Regional Access, is to get 345,000 cubic yards, for a project total of about 2 million cubic yards along 9.5 miles of beach.

The work is supposed to end before the environmental deadline of Wednesday, April 1, and work is funded largely by about $12 million from the beach nourishment fund, which gets half of the county’s occupancy tax revenues, and $15.3 million the N.C. General Assembly set aside to help local governments nourish beaches after Hurricane Florence.

The hurricane robbed Bogue Banks of about 3.6 million cubic yards of sand in September 2018.

The project comes on the heels of a 2019 winter-spring effort that put about 1 million cubic yards of sand in eastern Emerald Isle, all of Indian Beach and most of Salter Path at a cost of $20.2 million.

The third and final phase of the post-Florence nourishment project is expected to start in late 2020 or early 2021 and will place about 2 million cubic yards of sand along the strand in central Emerald Isle. Mr. Rudolph expects it to cost about the same as the current project.

Find a place to park and go look at the nice beach you bought for those folks!