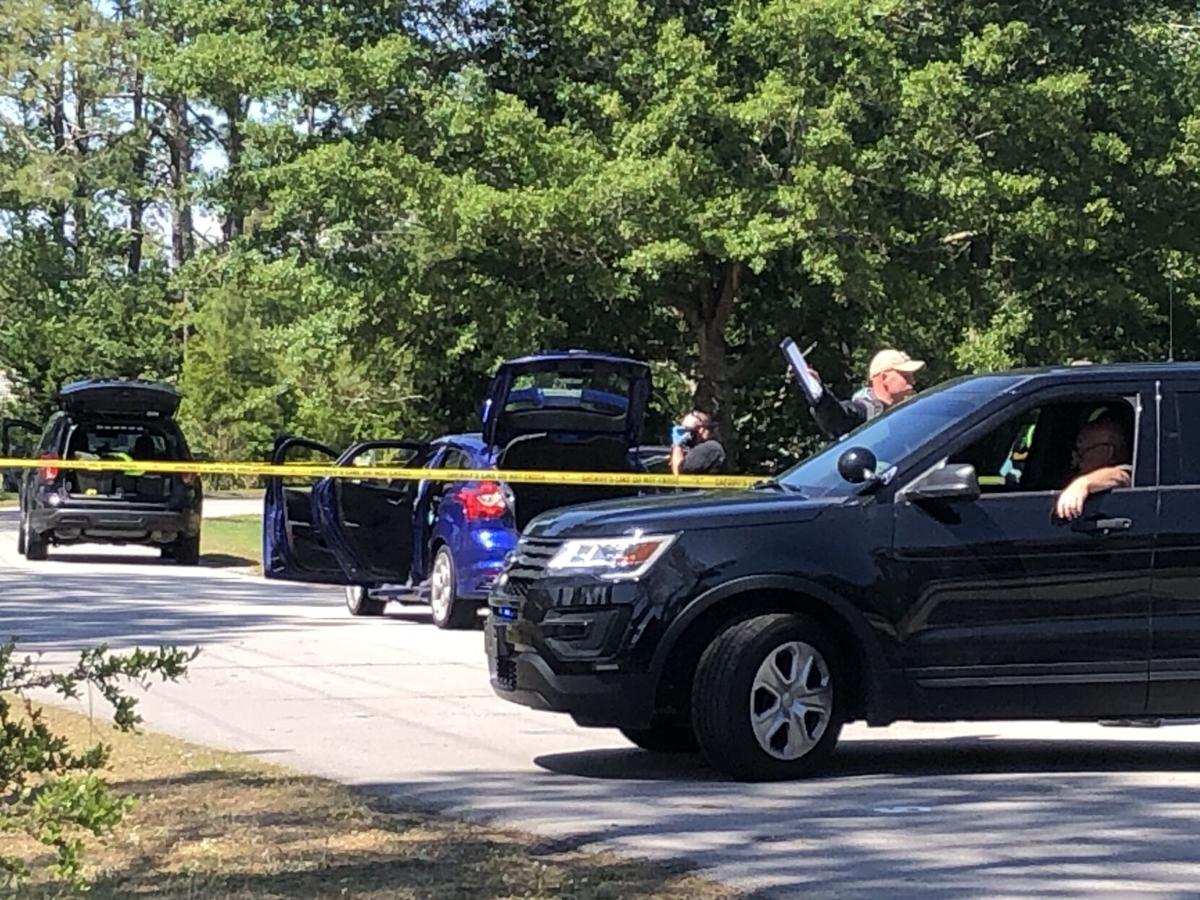 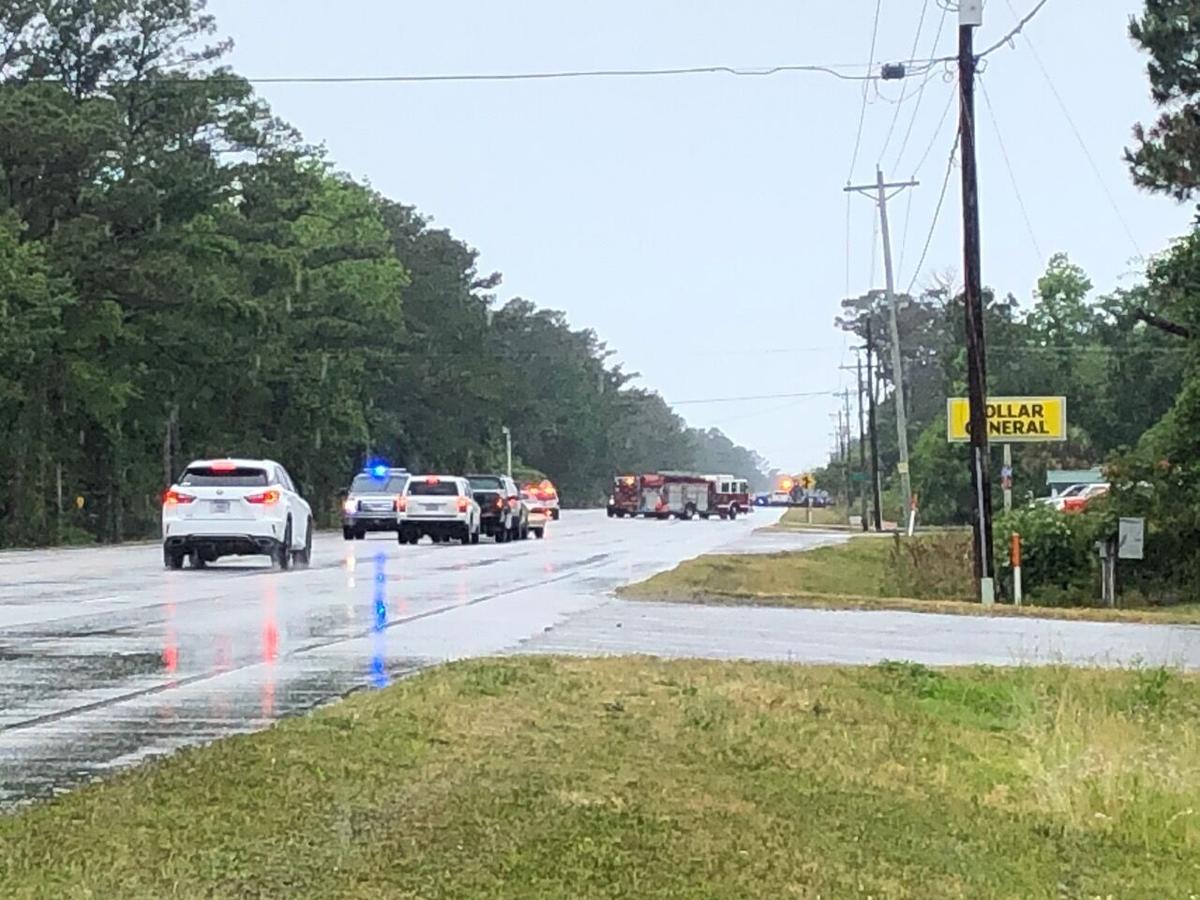 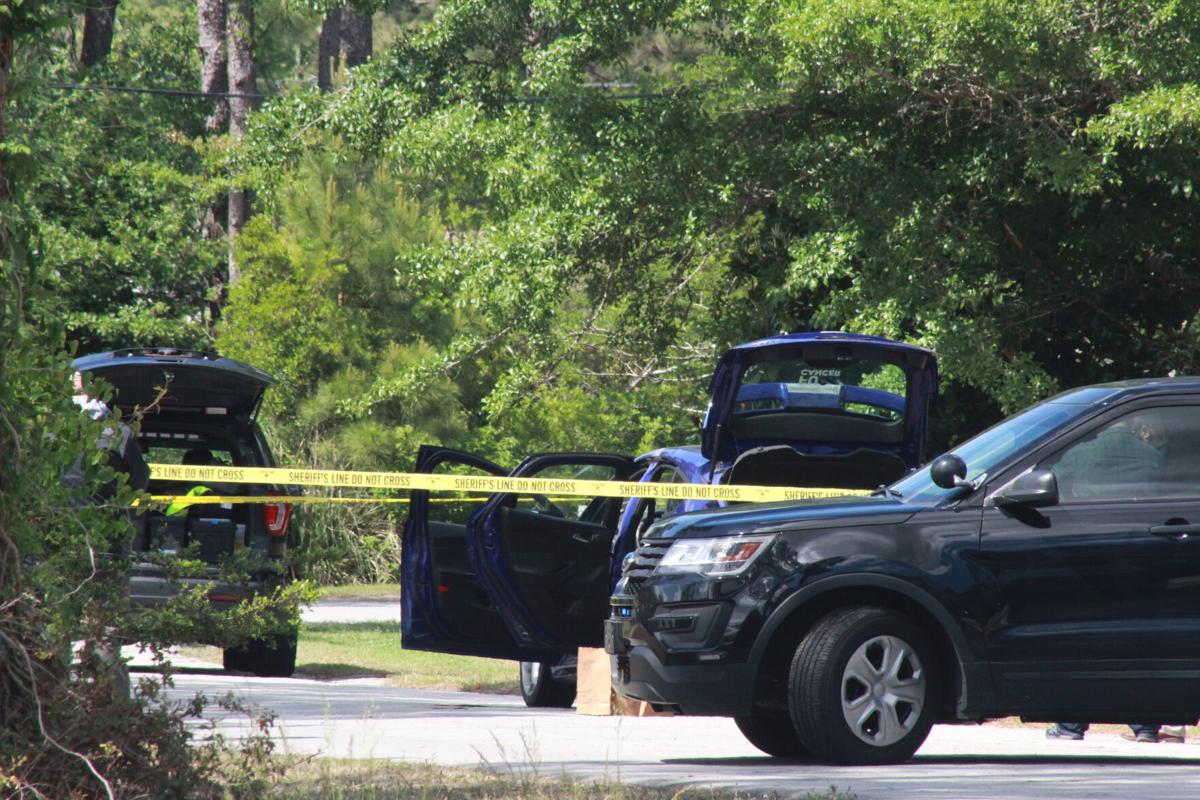 Carteret County sheriff’s deputies cordon off the scene on Paradise Lane in Newport where a 2.5-hour standoff ended Friday afternoon after a suspect reportedly shot himself. The individual later died at Carteret Health Care in Morehead City. (Elise Clouser photo) 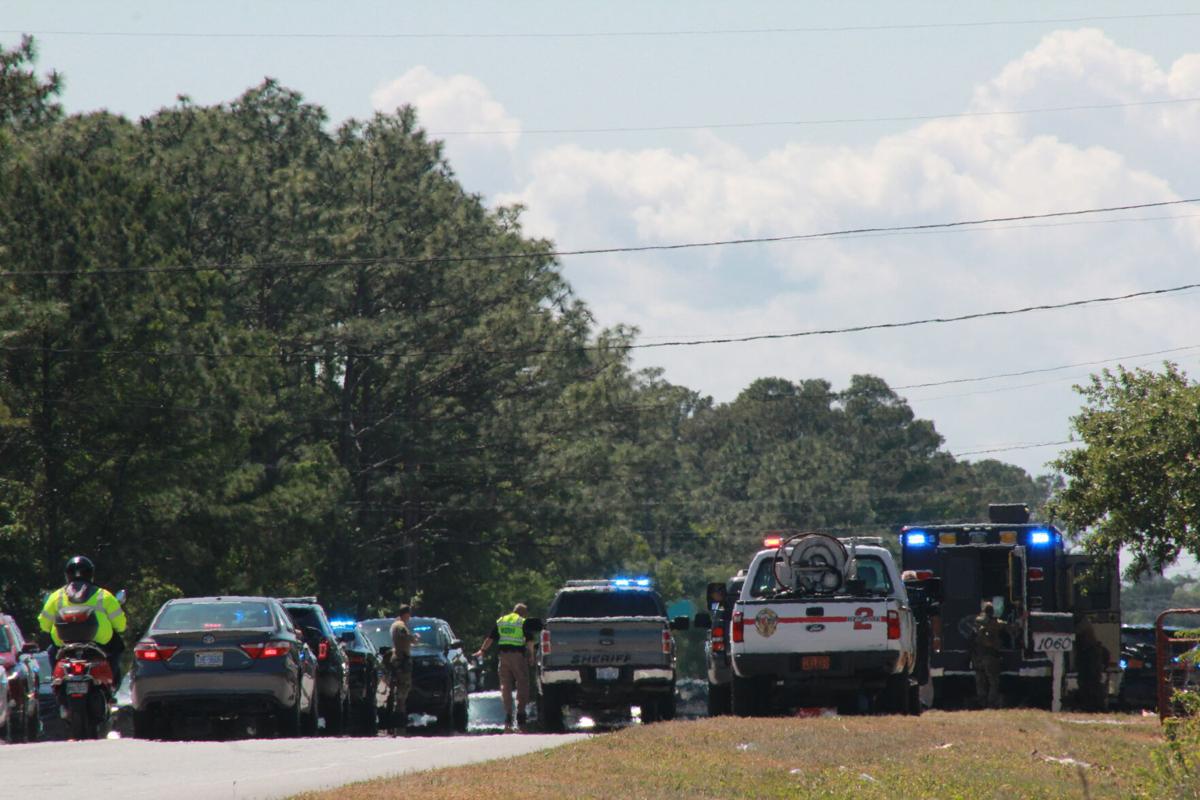 Emergency vehicles stage on Highway 24 near Paradise Lane in Newport Friday afternoon in response to a standoff between a wanted subject and law enforcement officials. (Elise Clouser photo) 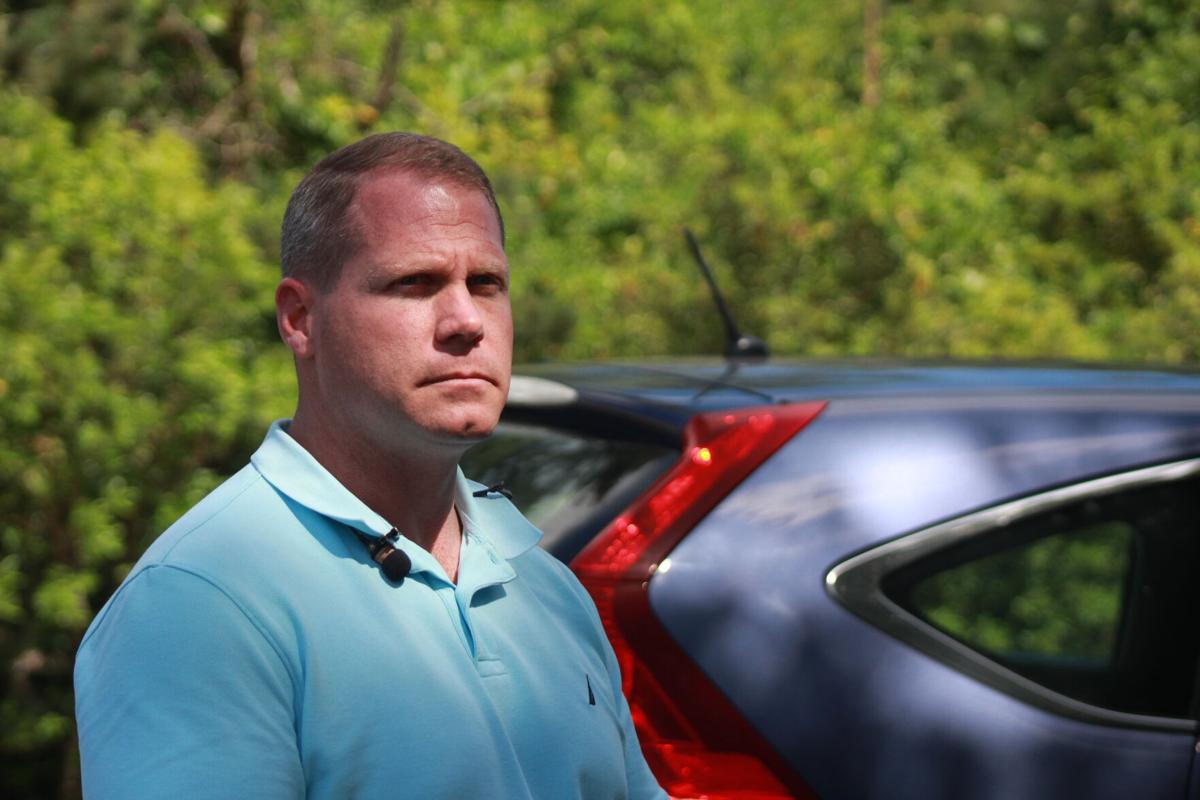 According to the Carteret County Sheriff’s Office, the individual, Richard Kelly Murphrey, 35, of Gloucester, was wanted on several outstanding charges, including as a habitual felon, carrying a concealed weapon and numerous drug charges. Carteret County Sheriff Asa Buck told news crews following the incident his office had been actively looking for Mr. Murphrey over “the past few days.”

Sheriff Buck said shortly after 8 a.m. Friday, someone tipped off the CCSO about a “suspicious” vehicle parked in an empty lot in Marshallberg and the office confirmed it belonged to Mr. Murphrey.

“Our deputies went down to the area and we called our SRT (special response team) down there and were actively looking for this individual,” Sheriff Buck said. “(Deputies) located the vehicle that he stashed near the Marshallberg Harbor.”

Sheriff Buck told the News-Times earlier Friday deputies discovered a stash of weapons inside the vehicle.

Several Down East and Beaufort area schools temporarily went on a precautionary lockdown as officials searched for Mr. Murphrey, but officials have said there was no active threat to students’ safety throughout the incident.

“Law enforcement officers were able to identify him and the vehicle that he was riding in and then followed that vehicle down Highway 24, stopped the vehicle on Paradise Lane, our deputies were attempting to execute a felony stop,” Sheriff Buck said.

After deputies stopped the vehicle, Sheriff Buck continued, two individuals, a man and a woman, voluntarily exited the vehicle and were taken into custody by Morehead City police. Sheriff Buck said they were later released but did not release their names or possible connection to Mr. Murphrey.

Sheriff Buck said a standoff ensued as Mr. Murphrey refused to exit the vehicle and law enforcement officials believed he was armed.

“He was refusing to get out of the vehicle and follow our commands. We had our SRT team in place, we had negotiators on the telephone with him just about the entire time, right up until the end of the incident,” Sheriff Buck said.

Eventually, Mr. Murphrey reportedly exited his vehicle and turned his firearm, an AK-47, on himself, resulting in a self-inflicted gunshot wound. Sheriff Buck said Morehead City EMS transported him to Carteret Health Care, where he died. The sheriff further said Mr. Murphrey possessed “a large amount of ammunition” for his weapon.

Numerous agencies, including the CCSO, Morehead City police and fire/EMS department, State Highway Patrol and others responded to the incident.

All five lanes of traffic one Highway 24 were blocked near Paradise Lane for the duration of the standoff, about 2.5 hours.

Sheriff Buck said the investigation is ongoing. The News-Times did not confirm details of the incident from sources other than the Carteret County Sheriff’s Office.

MOREHEAD CITY — Officials reopened a stretch of Highway 24 to traffic around 3 p.m. Friday after all five lanes were shut down for hours while law enforcement engaged in a standoff with a suspect near Paradise Lane.

The standoff reportedly ended when the suspect involved "turned his gun on himself," an official with the Carteret County Sheriff's Office said in a news release. As of 3:40 p.m., officials said the individual died of his injuries.

The News-Times is working to confirm the details with law enforcement and others present on scene.

The CCSO closed the highway to traffic just before 12:30 p.m. after a caravan pursued an individual, identified as Richard Murphrey, 35, of Gloucester, for "numerous warrants."

The incident started earlier Friday after the CCSO reportedly received a tip about Mr. Murphrey's whereabouts and discovered his vehicle with weapons inside.

Several eastern Carteret County schools were put on precautionary lockdown and suspended outdoor activities, a measure that was lifted around 10:40 a.m. School and law enforcement officials have said there was no threat to students or staff.

Following the repeal of the lockdown, a caravan of law enforcement vehicles caught the attention of passersby traveling westward along Highway 70 and onto Highway 24, where officials staged roughly in the area of the Dollar General near Paradise Lane. The highway was closed down at that time and traffic rerouted down McCabe Road, a News-Times reporter on scene observed.

CCSO officials said in a release they were negotiating with Mr. Murphrey, who was reportedly refusing to leave his vehicle.

Just before 2:55 p.m., the News-Times witnessed two deputy cars leading an ambulance and fire vehicle away from the scene of the standoff. Shortly after, traffic began moving in both directions along Highway 24.

MOREHEAD CITY — The Carteret County Sheriff’s Office has closed all five lanes of Highway 24 near Paradise Lane for a standoff with a suspect.

Just before 12:30 p.m., the CCSO said in a release deputies conducted a felony vehicle stop for wanted suspect Richard Murphrey in the area. He reportedly has refused to exit the vehicle.

“Negotiators are on-scene speaking with Murphrey,” the CSSO said.

According to a reporter near the scene, traffic is being redirected down McCabe Road. Traffic westbound along Highway 70 in the area is also reportedly congested.

The suspect is being sought on previous warrants, the CCSO has said.

Bus traffic at several schools in the area has been affected. Carteret County school system officials said buses stopped by the closure from Croatan High School, Bogue Sound Elementary School and Broad Creek Middle School were sent back to their campuses and parents were notified.

Friday morning, several eastern Carteret County schools were put on precautionary lockdown while law enforcement searched for Mr. Murphrey. There was no direct threats to the schools, officials confirmed.

Whats the deal with the firetrucks?Were ya going to wash his car off the highway maybe.LOL Its a wonder there wasn't a huge wreck with the po po flying in their po po rods trying to get there first.

Fire trucks are used to block the intersections and if for some reason there was a fire they would be there on scene. And after this happened they washed the road down to clean it off blood borne pathogens.

I-42 interstate hasnt reached us yet.However the backup on us70 yesterday is a preveiw of what's to come and we havent reached future developments yet,Remember what happen to Wilmington when I40 ended there in the 1990s.They were totally unprepared for the onslaught of people coming in and bringing commercial and residential and out of control enviromental issues.With our current city and county commissions we the taxpayers are in for a rough ride.

I am not trying to play devil's advocate. I am not here to judge or be rude. The man had a serious problem and he ran. We all know he did not want to go to jail. I am glad he had the common sense not take a hostage and they would gotten hurt. I am glad no police or Forst responders or anyone else for the matter got injured or worse. I am sad for his family. I wish he would just have given up and he would have been alive today. No one will ever know what was running through his mind at his last desperate moment. I we can do is offer up prayers for all involved. May his family find some peace and may the ones who witnessed this find some peace as well. If you have never seen that act of desperation it is something you will never forget. It will keep you up at night. It's a sad ending either way.

On the sunny side of this senseless tragedy , think of the costs to the taxpayers he saved by his actions .