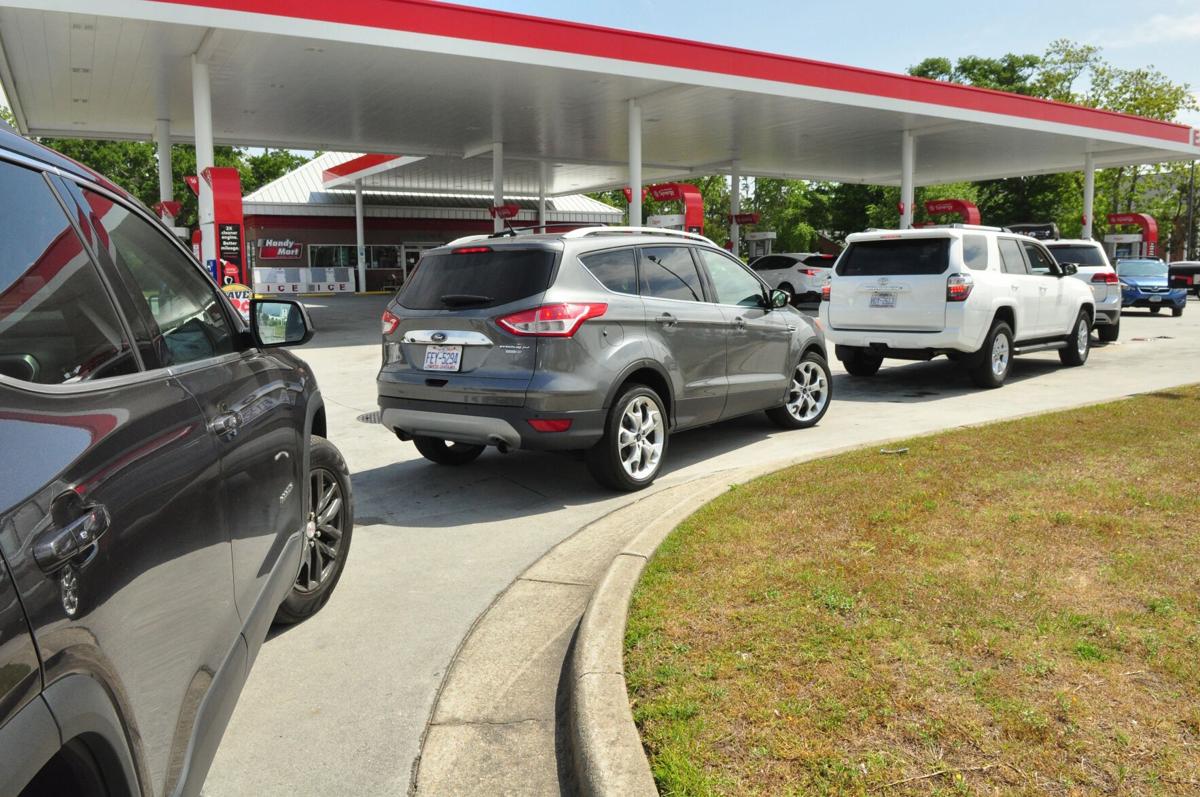 People wait in lines Tuesday to get gas at the Exxon Handy Mart in Morehead City following a cyber attack on the Colonial Pipeline. (Cheryl Burke photo) 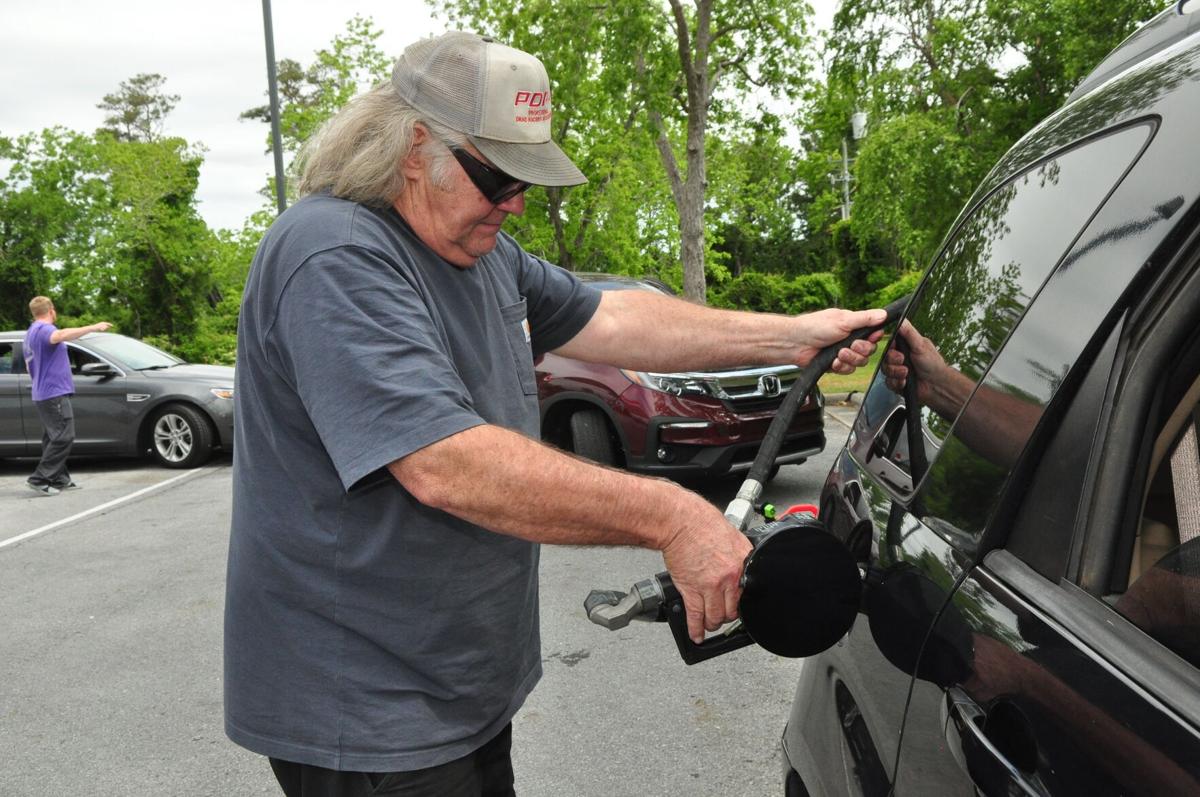 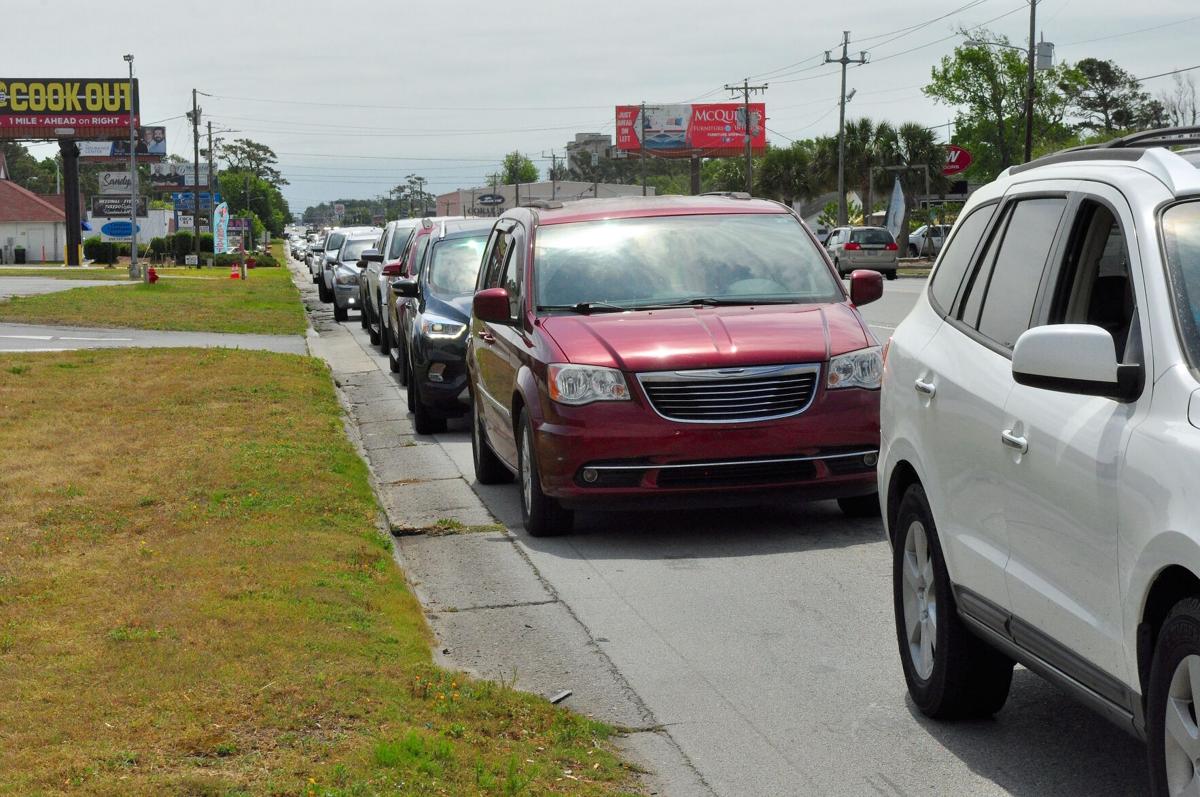 MOREHEAD CITY — Motorists, some impatient, waited in long lines Tuesday morning at the few gas stations that still had fuel to offer due to the temporary shutdown of a major East Coast gas pipeline following a cyberattack.

Michael Smith, manager of the Exxon Handy Mart in Morehead City, appealed to the public to be patient.

“We are asking people to remain calm,” Mr. Smith said after the Morehead City Police Department had been called to the station around 11 a.m. to ensure there were no problems. “We don’t know when we are going to get a new supply, but we will eventually get more.”

The station had one pump open for non-ethanol gas and those waiting in line were trying to take it in stride.

“We procrastinated last night and now I wish we hadn’t,” Alex Struyk of Morehead City said. “This is the fourth station we’ve tried. People are arguing and there was a brief tiff. It’s getting scary out here.”

Jack Davis of Harkers Island said he persevered in line because he needed gas to get to doctor appointments.

“I’ve got several doctor appointments coming up so I don’t have a choice,” he said.

“People are getting rude and I gave up,” she said. “It’s not worth all of this.”

The issues have arisen from a ransomware attack on the operators of the Georgia-based Colonial Pipeline that led the company to temporarily suspend all pipeline operations late last week. The Associated Press reports the pipeline, which runs from Houston, Texas, to the New York harbor, delivers around 45% of all fuel consumed on the East Coast, and federal officials said Monday they are monitoring supply shortages in the Southeast.

In response to the temporary pipeline shutdown, Gov. Roy Cooper declared a state of emergency Monday evening temporarily suspending motor vehicle fuel regulations in an effort to ensure fuel supplies throughout the state.

“Today’s emergency declaration will help North Carolina prepare for any potential motor vehicle fuel supply interruptions across the state and ensure motorists are able to have access to fuel,” Gov. Cooper said Monday.

James Davis, president of local oil supplier J.M. Davis Industries, said in email to store managers that was shared with the News-Times he expects fuel shortages to last at least through this week. Colonial Pipeline officials have stated they hope to restore most service to the pipeline by the end of this week, but it could still take time for supplies to return to normal.

“This shut down is crippling suppliers from New Orleans all the way to New York.  Unfortunately we do not know much more than that at this time.   We, and every other chain in the eastern US, will begin experiencing outages,” Mr. Davis said in the email sent Monday evening. “We and other retailers had hardly any warning of this critical failure in our supply chain and as a result had little opportunity to prepare for it's [sic] challenges.  We are all working hard to find, secure, and deliver product of various grades and types but available supplies have been exhausted extremely quickly out of fear and mostly due to the sheer magnitude of the failure.”

Mr. Davis told the News-Times he is working to conserve fuel reserves for emergency services, such as ambulances and police vehicles.

The AP reports the FBI is investigating the cyberattack and named the group DarkSide responsible.

The Associated Press contributed to this report.

Grab some toilet paper while your there!

Thanks for this story, Cheryl and Elise!!!

Modern ethanol 10% or more gas has a very short shelf life, the alcohol absorbs water from the air as well making the gas toxic for engines. This is a prime example of just how fragile modern society is, and how woefully unprepared most folks are for even a slight disruption of the supply chain. Having a supply of non ethanol gas, and rotating it through your vehicles is a basic step in keeping your family safe, non perishable food, drinking water, and a firearm or two are common sense preparations everyone should have made before they are needed. IF THE POWER IS OUT, GAS PUMPS DONT WORK.

Sheesh " now dems love pipelines" If you look at a map you will note the country is literally covered in already existing pipelines, the amount of hydrocarbons burned daily is mind boggling. The current pipeline drama with colonial should include a mention of the recent leak in Huntersville nc, originally quoted by the operator as minimal. Then gradually updated, the last fig. Provided was 1,200,000 gals of gasoline leaked into the ground. Gasoline is of course a generic name for the witches brew we actually burn, the base chemical is naptha, with lead substitutes, detergents, alcohols,and whatever waste was floating around that day at the refinery.

Those lil signs at the gas station saying " do not inhale, wash hands with water for 15 mins if in contact" are there for good reason. Perhaps instead of worrying about pipelines and groundwater contamination we should all swiftly blame the democrats for whatever Tucker told us was today's outrage?

Interesting that now Dems, including Gov Coop, now like pipelines.

Just goes to show , mp , that they are truly men of all seasons . They have more mouths than a centipede has legs . Have faith , pipelines will become evil again soon enough .

Gov Coop incited paranoia and hoarding when he declared a state of emergency.

How do you hoard gasoline? Bathtub? Hoarding is passe' because Big Joe is on it. I had all my image files attacked by this hacker three years ago. for $5000 they would unlock but I had a backup on a computer that has never seen the internet. Don't expect any government help. Think about how many degrees global temperature will drop. My advise? Ger a horse and some chickens. Gonna be a rough flight.

He did not help the situation , politicians are always a day late and quite short , but when the word got out mayhem erupted . For sure . This will pass followed by another crisis fueled by the ever present media of all types . Get used to it . Now if we can get those gloom merchants silenced we can enjoy our lives . For a change .

Gov. Coop may have caused an insurrection at some gas stations in NC.

May also be part of Biden’s plan to push for battery-powered cars.

Or Transportation Secretary Buttigieg’s $2 trillion plan for roads and bridges to get to free college classes or free child care centers. Sources say he couldn’t even fix potholes in South Bend when he was mayor.