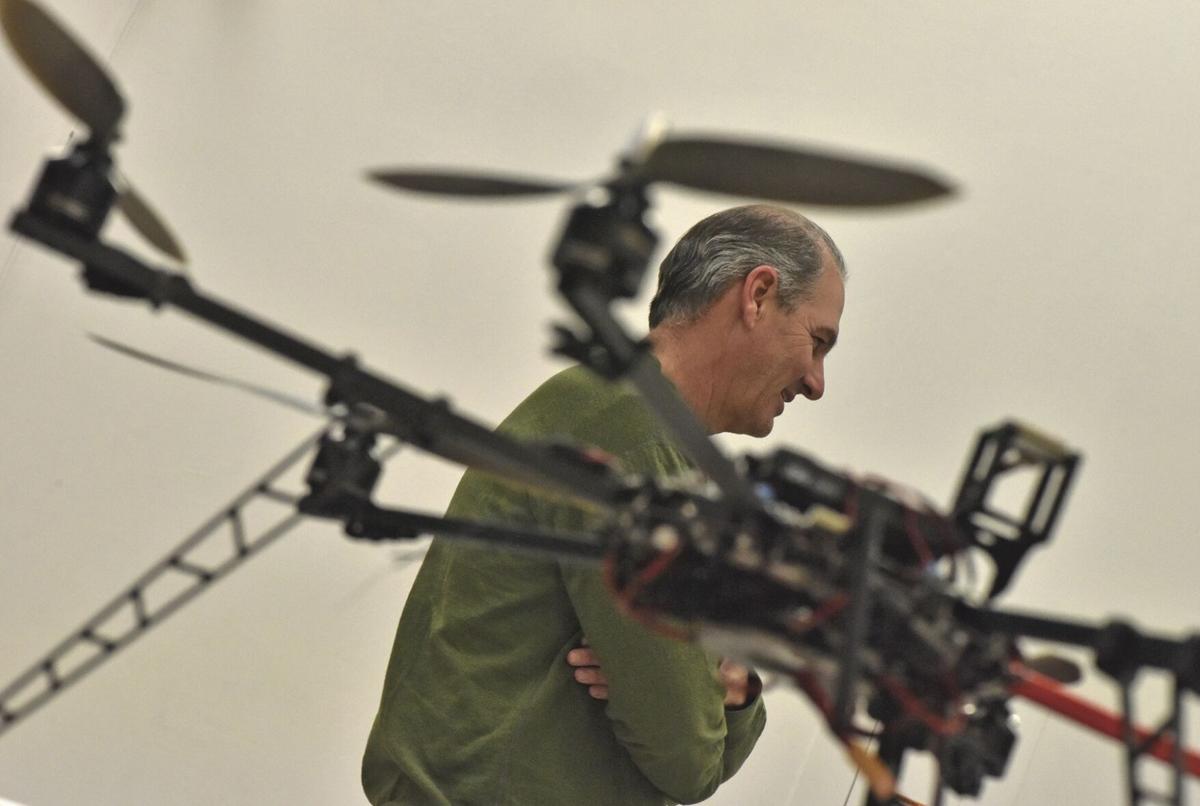 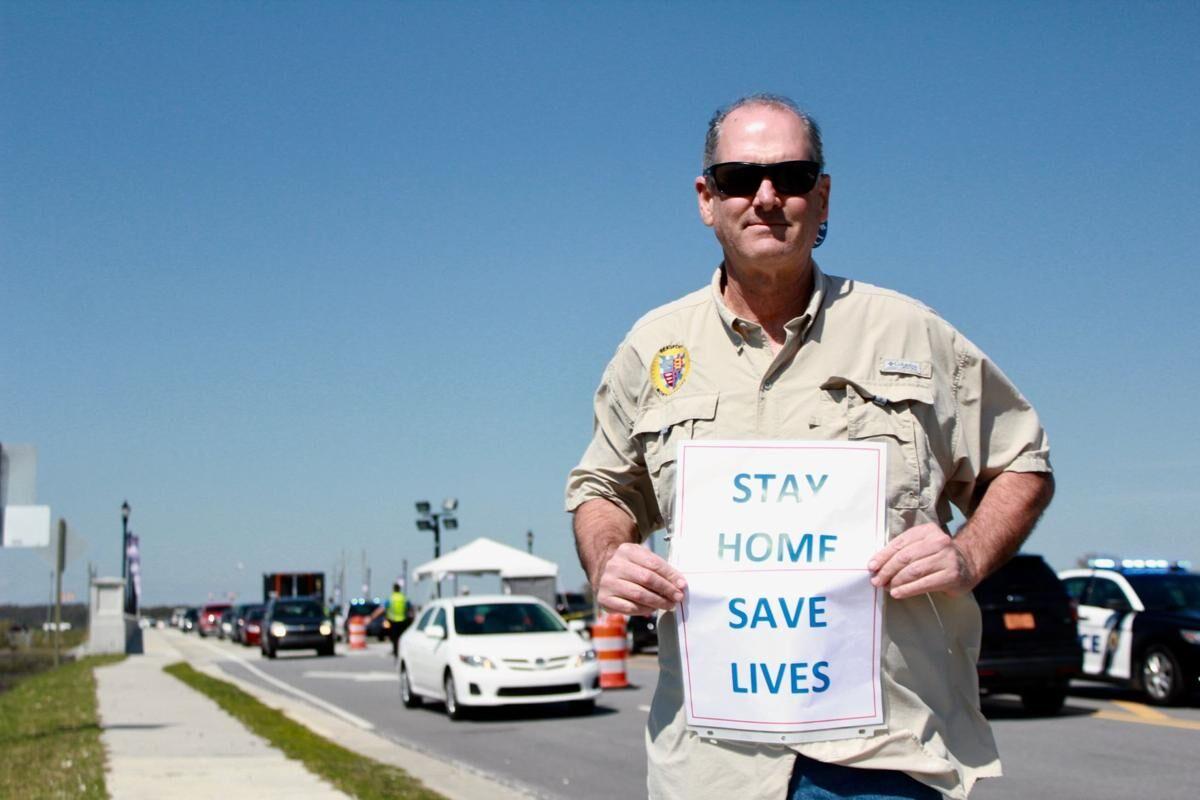 Beaufort Mayor Rett Newton poses with a sign that reads “STAY HOME, SAVE LIVES” April 9, 2020, at the town’s entry checkpoint on the Turner Street bridge. Mr. Newton is set to announce a bid for the U.S. Senate next month.  (Elise Clouser photo

BEAUFORT — North Carolina’s 2022 U.S. Senate race will become even more crowded – and feature a Carteret County native – as Beaufort Mayor Rett Newton is set to announce his bid for the seat early next month.

Mr. Newton, who was elected to the municipality’s top seat in 2017 and reelected in 2019, will join the Democratic ticket Tuesday, April 6.

“We have such great national challenges that I just can’t sit on the sideline, certainly not when our democracy is under attack,” he told the News-Times Thursday. “I am committed to running for the U.S. Senate in 2022.”

Sen. Richard Burr, a Republican, will not seek a fourth term, and the seat has garnered wide interest across the political spectrum. North Carolina’s position as a swing state is sure to attract money and attention to the race as Democrats and Republicans look for gains in a split Senate.

A number of Democrats have already joined the race, including a serving state senator and a former one. Past N.C. Supreme Court Chief Justice Cheri Beasley, who lost her November reelection bid by 401 ballots, is expected to announce her run next month, as well.

Mr. Newton, a doctoral student at the Duke University Marine Lab, said he was motivated to act following the riot at the U.S. Capitol Jan. 6. As of Thursday, federal prosecutors had charged more than 320 individuals in connection to the attack, with at least 143 defendants indicted by grand juries, CBS News reported.

In a statement days after the mob swarmed the Capitol Building, the mayor said he struggled to publicly address the assault.

Thursday, Mr. Newton said the events of that day, and the action – or inaction – of Congress that followed, had a “profound effect” on him.

“There are elements in our government that are willing to destroy our democracy so they can stay in power,” he said, taking aim at the 147 Republican members of Congress who voted to overturn the November 2020 election just hours after the attack. He called the situation “insane.”

Among the 147 was U.S. Rep. Greg Murphy, R-N.C., who represents a swath of the eastern part of the state, including Carteret County.

National divisions have trickled down to the municipal level, Mr. Newton said Thursday.

Mr. Newton said he plans to launch a campaign and remain committed to his role as mayor.

“I am not an attorney, I am a scientist. I have a vast international experience, I understand the challenges of working at local level and at a global level,” he said. “…I can reach across the aisle to some Republicans who share my interest in protecting our democracy, protecting our environment and helping those that are stuck in the socioeconomic divide.”

Mr. Newton’s tenure as mayor has been somewhat higher profile than some of his predecessors, and he was certainly met with new challenges.

He was on the ground with emergency personnel during Hurricane Florence in September 2018 and Hurricane Dorian in September of the following year. He’s been outspoken on the continuing need for recovery resources.

Mr. Newton also positioned himself front-and-center during the early days of the coronavirus pandemic, issuing orders to limit travel to Beaufort by restricting access via a short-lived checkpoint at the Turner Street bridge.

The move was criticized, but the mayor has defended the actions, calling the safety measures “imperfect” but necessary to protect the community.

Is this some kind of a joke ? Just adds to the weirdness of today’s politics .

The Mayor can count on a majority of the residents of Beaufort voting for any other candidate.

I wonder if any of the "press" will ask him if barricading the town last year would be a good idea to replicate on a national scale? I guess he can claim to be consistent with Biden by pointing out that he only restricts the constitutional rights of law-abiding CITIZENS. He won't stand for constitutional laws being applied to criminal aliens as they invade the country. Makes perfect sense.

Mr. Newton...I assume you have also been moved by the continuing ANTIFA riots as well as the BLM peaceful protests turned to looting and rioting.....I'm glad January 6th moved you....have some testicular fortitude sir.....tell it both ways.

Mr. Newton seems to be lost at sea, but I'm sure he will wash in sooner or later.

He’s a broker of misinformation. Whiteness is wicked, blackness is beautiful.

Everyone, come to Beaufort, where you WILL BE CHARGED MORE FOR SEWAGE THEN ANY OTHER COMMON UTILITY!

Newton, another ... seeking higher office to do more damage (and line his pockets) I see. I guess the Beaufort blockade wasn't enough for him.

“…I can reach across the aisle . . ." That's the last thing we need, another John McCain/Romney RINO type. Can we have someone who actually has a good set a principles and actually stands firm on them as opposed to another crooked politician?

Hopefully he loses big in the primary election.

Whoops, missed that part of him running on the dem ticket, so that's a little bit more truthful.

Based on his own Beaufort history he might be the only Dem to support closing the border.

Thoughts of Dr Strangelove come to mind. Could this be General Jack Ripper re-incarnated.

Nothing personal against this guy , just don’t thing we need someone in office that acts before he thinks the problem out . Have enough grandstanders and showboaters in office as it is . We have way too many serious issues and more coming daily for a loose cannon to representing us . But , he is free to throw his hat into the ring as well as others . That is our way and be glad for it . Let the voters decide . Just saying !

From Hysterical Beaufort to Washington in one step.Yea I can see being Mayor of Beaufort qualifies ya. LOL

A vet, a local mayor, recognises the problems of the rural poor, shut down his lil town in the face of a pandemic, and willing to work a cross the aisle. Hmmm sounds like a good candidate, but unless he smooches trump's rear often and publicly he will not get any local gop support.