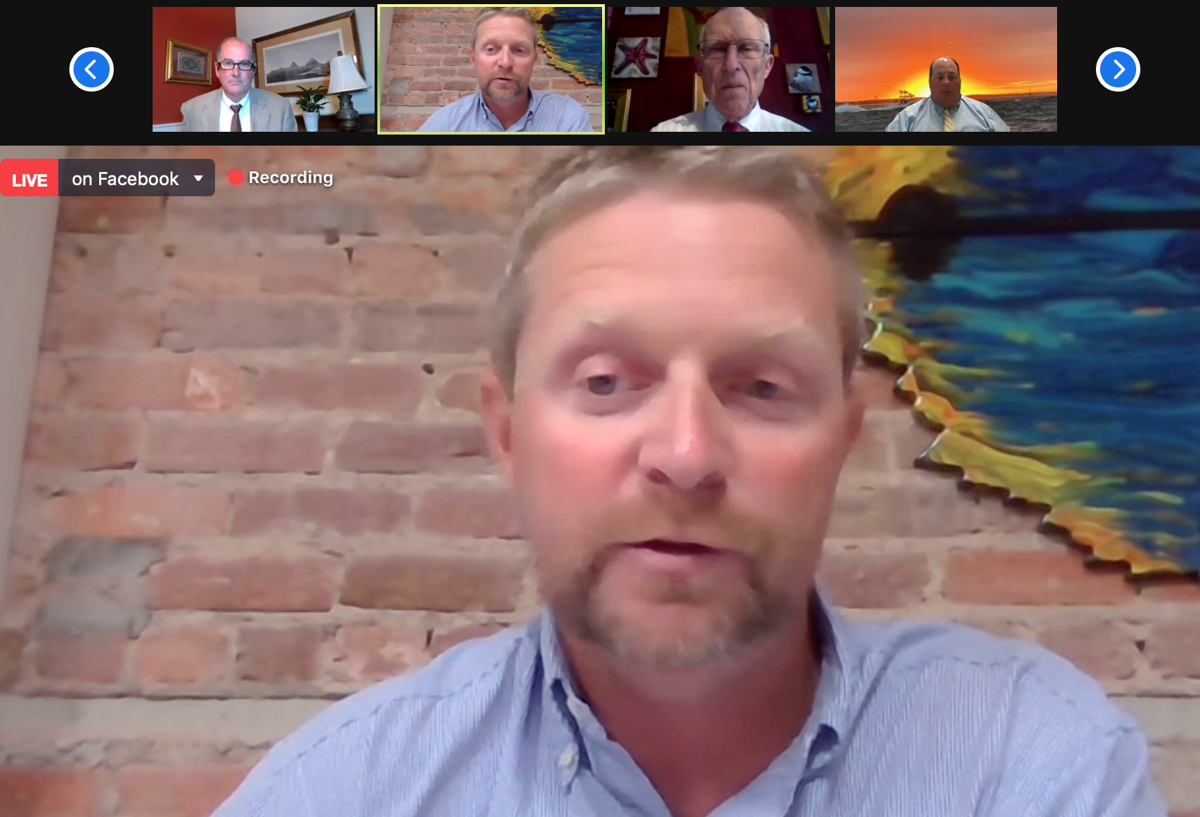 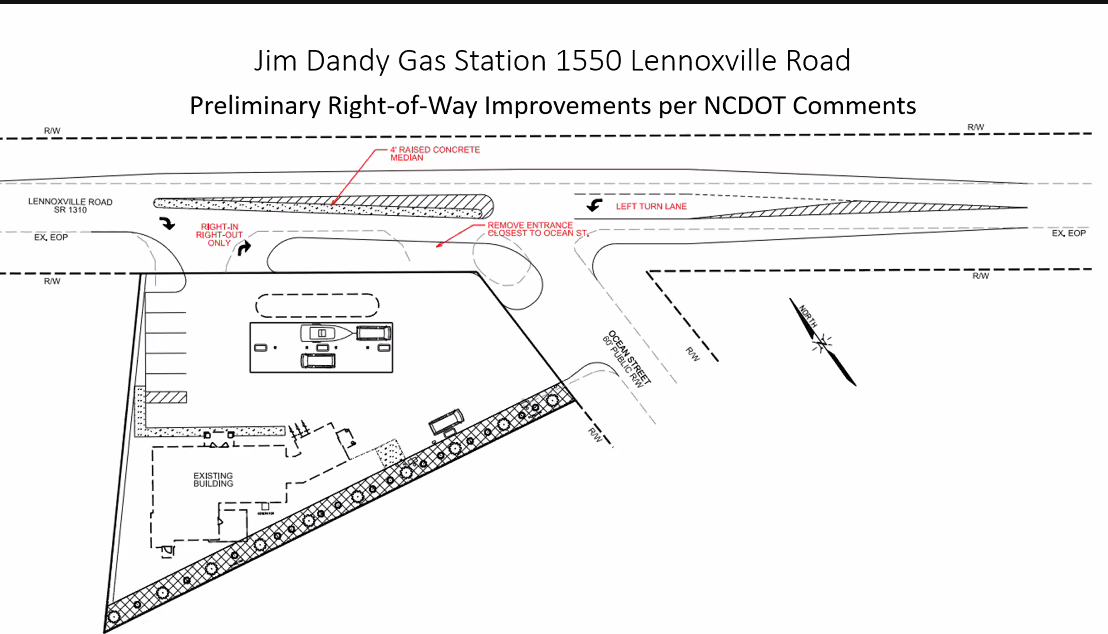 This schematic shows roadway changes officials with Jim Dandy Convenience Stores could make to Lennoxville Road to minimize turning movements if the company moves forward with putting a station at 1550 Lennoxville Road in Beaufort. (Contributed graphic)

BEAUFORT — After honing in on suggested traffic changes and allowable land uses, Beaufort commissioners decided earlier this month they need more time to review before ruling on a hotly-contested permit that would allow plans for a gas station on Lennoxville Road to proceed. The board will reconsider the matter Monday.

The Beaufort Board of Commissioners heard more testimony Sept. 13, during its Zoom regular meeting, on the application for the special-use permit at 1550 Lennoxville Road first submitted around May 17 and later updated.

The board will consider the matter, possibly for the final time, Monday during a virtual work session. Commissioners agreed to leave the special hearing open, thereby potentially allowing further testimony.

“I came in confused, I’ve been more confused, and at the present time, I’m not ready to make a decision,” Commissioner Charles McDonald said Sept. 13, joining the majority seeking further review of the newly supplied testimony.

Neighbors near the lot proposed for the fueling station and convenience store have launched fierce opposition to the proposal by Jim Dandy Convenience Stores and have testified and engaged expert witnesses to their cause. The neighbors themselves have been limited in participation in the quasi-judicial hearing – a proceeding that allows only those with standing, as determined by the town, and experts to testify.

Engineer Chase Cullipher of The Cullipher Group said they developed a draft plan to alter Lennoxville Road in the area of the gas station based on  preliminary feedback from the N.C. Department of Transportation. That draft plan shows a widening of Lennoxville – now two lanes – in front of the station, with a median making the western-most entrance to the property a right turn in and out only. A left-turn lane would be added near Ocean Street to enable traffic to enter and exit via the side street.

“All these improvements would be at a substantial cost to my client potentially, and it’s all for the better of public transportation and public safety,” Mr. Cullipher told the board.

Neighbors requested the board allow time for their own expert witness, a civil engineer, to review the suggestions.

That need to review the proposal – particularly how it would impact Ocean Street – was echoed by commissioners.

“I would just like a little time to look at it other than just the flash that we’ve actually seen,” Commissioner Sharon Harker noted.

Also during the Sept. 13 meeting, an attorney for the neighbors, Robin Smith, contended the town’s land development ordinance clearly defines gas service stations and convenience stores separately and allows them in different districts. In this case, convenience stores are not allowed in the L-1 (light industrial) district, which the parcel is zoned, even with a special-use permit. As such, she argued the retail element of the Jim Dandy proposal – and the initial application as a “convenience store” – excludes it from the property under the ordinance.

Mr. Davis has previously said he has to have the convenience store to support the business at that location, but contends the primary use is as a fueling station. An attorney identified as representing Mr. Davis, Russell Alexander, argued the ordinance must be interpreted using “plain meaning” and the board must “narrowly construe (the LDO) in favor” of the property owner unless the use is strictly prohibited.

Multiple commissioners said they were further confused by the testimony of the attorneys.

To approve the special-use permit, the board must find the use is allowable in the zoning district, the application is complete, the location and “character of the use” is in conformity with the LDO and other planning elements, traffic issues meet town regulations and are adequate for the use, the use will not “substantially injure the value of adjoining or abutting properties” and the use does not “materially endanger” public health and safety.

The town has one gas station, a Speedway off Live Oak Street.

In other action at the Sept. 13 meeting, town commissioners:

·     Agreed by consensus to leave the town’s mandatory mask policy for indoor spaces in place and to continue meeting virtually for the time being.

·     Appointed Barbara Francis-Heckman to the parks and recreation advisory board.

·     Unanimously approved a change order in the amount of $323,271.33 for an ongoing street and sidewalk project.

·     Unanimously rezoned the lot at 302 Cedar St. from B-1 (business) to R-8 (medium density residential). The structure on the property is a historic, single-family home.