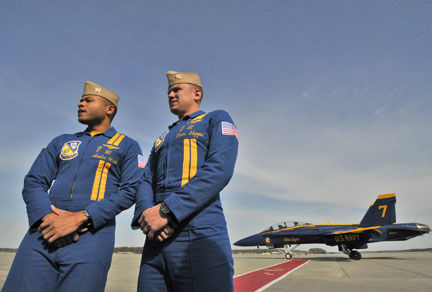 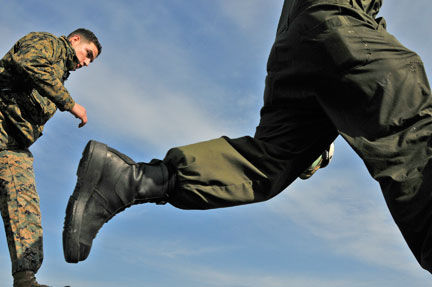 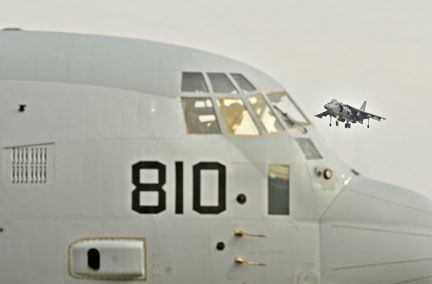 The Blue Angels, the world’s premier aviation aerobatics team, will headline the three-day event May 4-6, 2018, at MCAS Cherry Point. Blue Angel 7 pilots Lt. Andre Webb and Lt. Dave Steppe arrived around 11:20 a.m. aboard the base after making a fuel stop in Knoxville, Tenn. They were previously in Waco, Texas, making similar preparations for an air show there.

Lt. Webb said the team was there to inspect facilities and take care of other preparations before next year’s show.

Lt. Webb said this is also a time for him and Lt. Steppe to scope out the area and choose hotels for their stay.

MCAS Cherry Point was presented the 2016 Blue Angel Show of the Year award, beating out over 30 other air shows that year for the flight demonstration team’s top pick. Next year will be the first time the Blue Angels return to Cherry Point since then.

“Cherry Point did an awesome job, not just with the air field but with the community itself, and we’re excited to be back,” said Lt. Steppe. “We’re expecting an awesome air show, just like we had in 2016.”

The Blue Angels have been wowing audiences with their flight demonstrations since 1946. They fly in tight formations at speeds up to 700 mph, performing air aerobatics such as loops and rolls in their distinctive navy and yellow-colored aircraft.

The pilots said training for air shows is intensive, with pilots required to log 120 flights before they can perform. They often take two or three flights a day to practice. Despite this, Lt. Webb said it’s a great experience.

“The best part of our day is hopping in a jet and flying,” he said.

In addition to the Blue Angels flight team, the 2018 Cherry Point Air Show will feature a variety of military and civilian aerobatic demonstrations. For the first time, the Canadian Snow Bird jet aerobatics team will join the lineup. A full lineup of performers will be made available closer to the event. Admission and parking to the air show is free.

“The Blue Angels demonstration hasn’t changed much over the years, so I hope they (spectators) come out and watch our F/A teams fly fantastic,” Lt. Webb said. “… Come out and watch the show, enjoy us and all the rest of the performers.”

An array of other aircraft were aboard the station during the Blue Angel’s arrival conducting exercises.

Maybe no crashes this year.

Not to rain on anyone's parade, but why do we spend taxdollars on this?

In answer to CARTEREISCORRUPT, We spend this tax money to promote our military and as a recruitment tool. The same as the many flyovers of other branches of service at many sporting events. This is only one of the ways that we are able to see our fine military at work. Good luck and God bless these Blue Angel Pilots.....

Hosting air shows is the way to bring communities together, see where parents work and experience all the military has to offer. I love the BLUES and wish this were a yearly event. It's a great way to show the military how proud we are of them.

I guess we could spend this money on more free cheese or some other welfare giveaway...