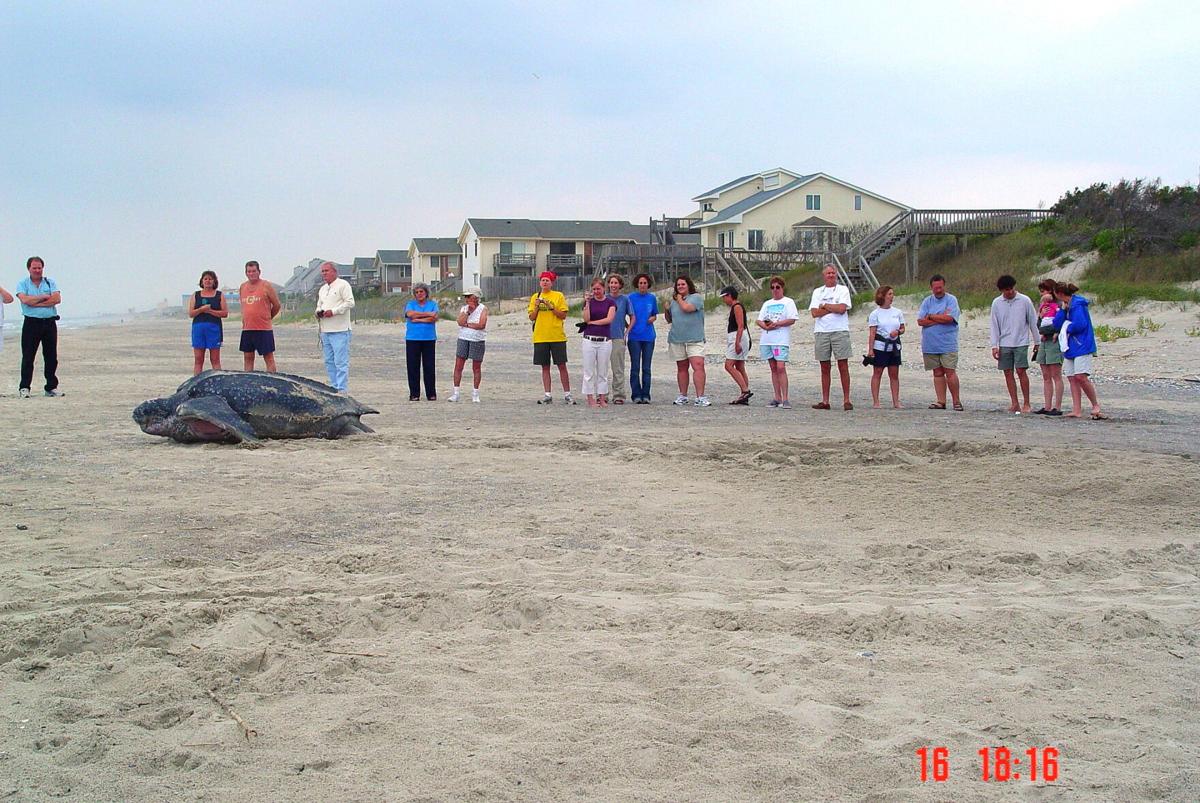 A loggerhead sea turtle heads back to sea after laying a nest on the beach in Pine Knoll Shores in this undated photo. (Contributed photo) 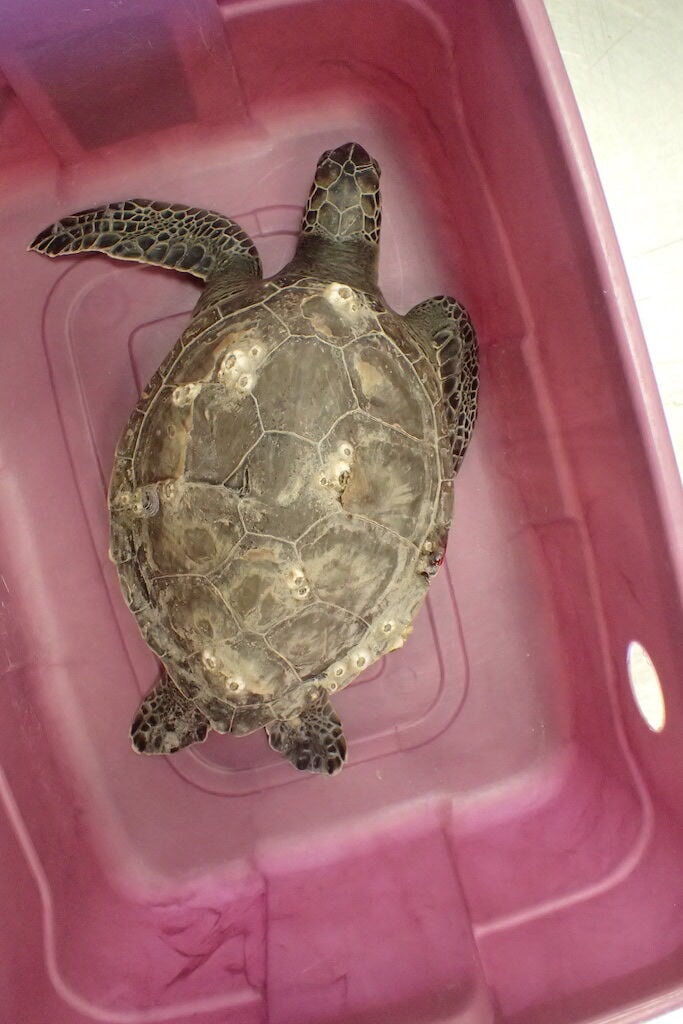 A green sea turtle rests in a bin after being cold-stunned, rescued on Ocrakoke and brought to the Center for Marine Sciences and Technology in Morehead City for treatment recently. (Contributed photo)

Turtle Island Restoration Network, a global environmental organization dedicated to advocating for the oceans and marine life, issued an announcement Monday. According to the newtwork, Earthjustice attorneys filed on behalf of the network, the Center for Biological Diversity and Defenders of Wildlife, formal notice of intent to file a civil complaint against the National Marine Fisheries Service. Sea turtles can be found in the ocean waters off the North Carolina coast, including Carteret County, especially during nesting seasons. The three most frequently seen species are loggerhead, Kemp’s Ridley and green sea turtles.

“The Trump administration’s final rule (reversed) course on a proposed rule about turtle excluder devices in shrimp trawl fisheries in the Gulf of Mexico and South Atlantic, reducing the measures’ effectiveness by more than 50%,” TIRN said in its announcement. “The weakened rule exempts turtle excluder devices on vessels smaller than 40 feet, which will result in an estimated 1,300 preventable sea turtle deaths form smaller vessels each year.”

“There’s no excuse to let sea turtles suffer an excruciating death drowning in shrimp nets when there is a simple device to let them escape,” she said.

The notice gives the fisheries service 60 days from Monday to address the alleged violations before the lawsuit is formally filed. News-Times staff reached out to the NMFS for comment, however, Public Information Officer Allison Garrett said the fisheries service “doesn’t comment on pending litigation.”

“We’ve been getting a steady trickle of cold-stunned turtles this year,” Dr. Harms said Tuesday in an email. “It’s not as bas as in some years, but over 40 turtles state-wide have gone to the N.C. Aquariums or to the Karen Beasley Sea Turtle Rescue & Rehabilitation Center for rehabilitation.”

He said shrimp trawls are “a significant threat to sea turtles, but far less so than formerly before TEDs were developed by a commercial fisherman and eventually mandated in many of the fisheries.

“TEDs aren’t perfect, and there have had to be modifications over the years to improve design and further reduce lethal sea turtle bycatch while maintaining shrimp catch rates, but they have had a big role to play in (the) rebound of some sea turtle populations over the past couple of decades,” he continued.

Dr. Godfrey said state biologists are looking at whether the cause of the the increase in nests is more adult, reproductive females or more eggs being laid by the same number of females.

“On average, an adult loggerhead female lays four nests per year,” he said. “So far, data suggest that the increase in nests reflects an increase in adult reproductive females. This may be due to various actions taken in the past few decades to protect loggerheads in the U.S., including use of TEDs in otter trawls, improved measures in hopper dredges to reduce accidental mortality associated with dredging, increased protection of incubating nests on east coast beaches, etc. We hope this positive nesting trend continues for this protected species.”

Dr. Harms said adding TEDs to trawls where they currently aren’t required would be an additional protection for sea turtles.

“This proposed rule is another example of the outgoing Trump administration trying to roll back as many environmental and public health protections as it can before leaving office,” he said.

Bunch of folks with nothing else to do . We have no shortage of sea turtles . They are so plentiful that they are used as a food source . Turtle burger anyone ? I have actually had a turtle burger . Pretty much like any other creative burger once you get past the bones . Not my cup of tea but you can live on it .

That is a Leatherback sea turtle in the picture, not a Loggerhead.

Interesting , you post my comment for a day then erase it . Did one of your frog kissing buddies object ? Most interesting is that I spoke the truth , all of it . Guess free speech is selective amongst the weekend staff . Be even more interesting to hear what Nikki has to say . Have a nice day .