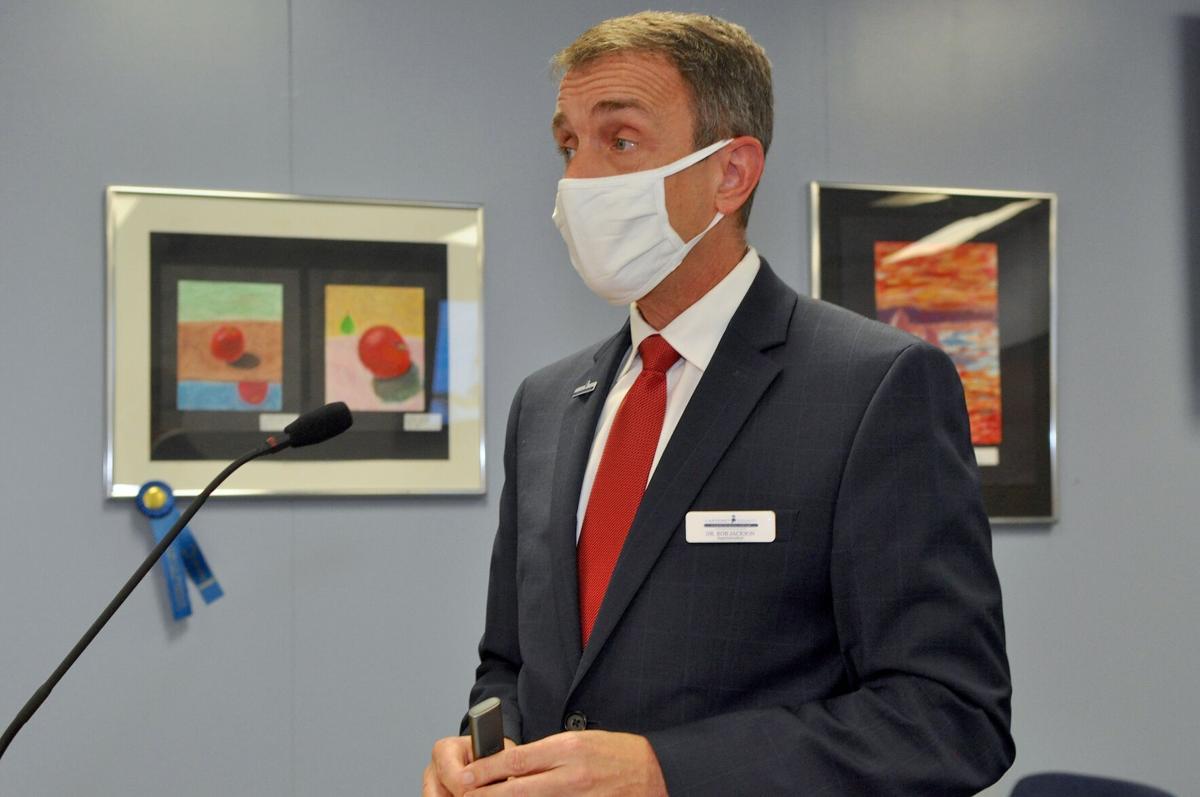 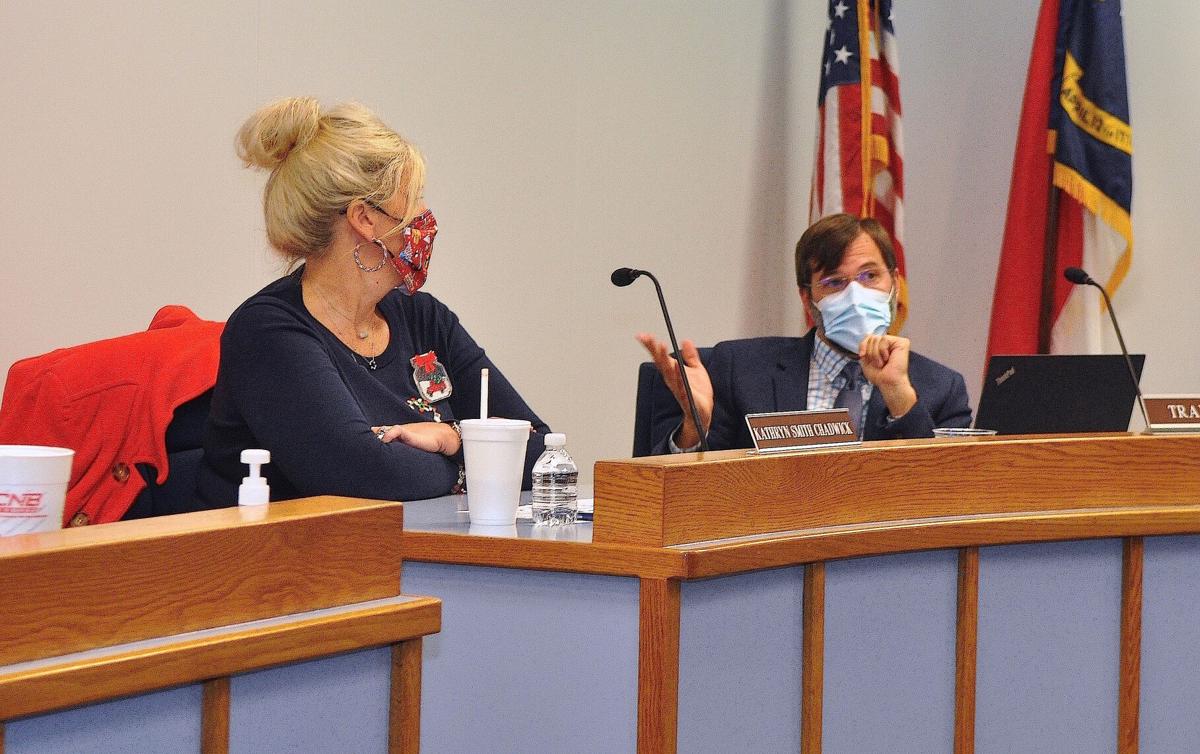 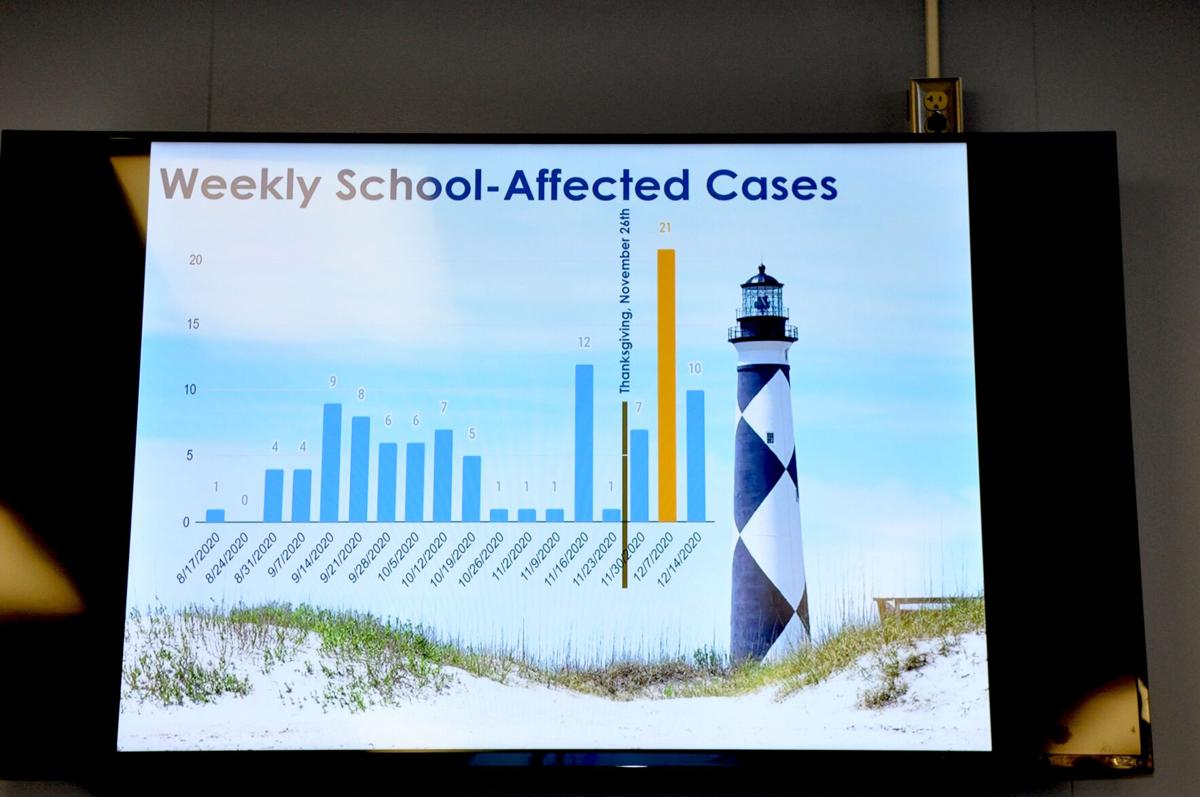 This graph presented Wednesday during the Carteret County Board of Education meeting shows the spike in COVID-19 cases in county schools following the Thanksgiving break. (Cheryl Burke photo)

BEAUFORT — Citing concerns over a predicted spike in COVID-19 cases following the Christmas holidays, the Carteret County Board of Education voted Wednesday to have students switch to remote virtual learning Wednesday, Jan. 6 through Friday, Jan. 15 after returning from holiday break.

“We were told the week of Jan. 6 and 11th is when we will see a spike,” Superintendent Dr. Rob Jackson said during the emergency called meeting Wednesday in the school system’s central office. “As allowed by the governor, after talking with the principals, the cabinet staff, working with the health director and school nurses, it is my recommendation that we move to 100 percent remote learning from Jan. 6-15 and return (Tuesday) Jan. 19 to the plan as we are now.”

The board approved the proposal by a 5-2 vote, with members Travis Day and Kathryn Chadwick opposing the idea. Board member John McLean made the motion to approve the measure, with Dennis Goodwin providing a second. Also voting for the idea was Chairperson Clark Jenkins, Brittany Wheatly and Katie Statler.

Mr. Day voted against the suggestion, citing concerns about families struggling with childcare issues and a loss of in-person instruction time.

Ms. Chadwick also said she worried about childcare for families, as well as making sure students have adequate food after the long break, which begins Monday and goes through Tuesday, Jan. 5.

“We’re already putting a big burden on families and there are people who don’t have jobs. Where does the food factor in?” Ms. Chadwick said.

“We’re still working out how that will happen, but we will make it happen,” Dr. Jackson said.

Other board members, like Ms. Wheatly, said she would rather err on the side of safety for students and school personnel.

“I would rather be really safe than push it and not be able to go back to class later on,” she said.

During his presentation, Dr. Jackson shared that the County Health Department and N.C. Department of Health and Human Services predicted there would be a spike following the Thanksgiving break, and that has been reflected in the school system’s COVID-19 numbers.

“We have been reporting numbers for 18 weeks, and six of those weeks we have had 0 or 1 case,” he said. “The week after Thanksgiving, we had seven cases. The following week we had 21 cases. This week, we’ve already had six cases so far.”

The increased cases have put a strain on teachers and staff, including teacher assistants who also serve as bus drivers, according to Dr. Jackson.

“We are nearing a breaking point. Our substitute (teacher) pool is significantly diminished. We are working with 20 percent of our normal substitute pool,” he said. “When we have staff that have to quarantine, we don’t have enough subs. We are having to shift staff around to fill those slots. It’s especially difficult with TAs, who also drive school buses.”

He added that since August, the school system has had 58 confirmed positive COVID cases in employees, and 59 for students. The 117 total cases were as of Wednesday afternoon.

The total confirmed positive cases for students is: elementary, 14; middle, 10; and high school, 35.

“We have asked much of our parents, teachers and staff. I also want to thank the community for its support as well,” he said.

BEAUFORT — The Carteret County Board of Education, by a 5-2 vote Wednesday afternoon, approved having students attend school remotely Jan. 6-18 after returning from Christmas break.

Students will return to the current calendar Tuesday, Jan. 19, under the motion approved by the school board in a special meeting at the administration building in Beaufort. The move to remote-only is to prevent a spike in COVID-19 cases following Christmas break.

This change back to remote is dictated by our Govenor Roy. And the supporting evedence is flimsly and obsfucated

Dr. Jackson.The headmaster said this, “We have been reporting numbers for 18 weeks, and six of those weeks we have had 0 or 1 case,” he said. “The week after Thanksgiving, we had seven cases. The following week we had 21 cases. This week, we’ve already had six cases so far.”

"The increased cases have put a strain on teachers and staff, including teacher assistants who also serve as bus drivers.",

“We are nearing a breaking point"

What about the students breaking point? This entire exercise is without any convincing evidence. Can the teacher's union do whatever they feel like. Are they under contract? How many students have been hospitalized?

He is concerned for teachers and staff.

Here is an idea. Teachers who do not honor contractual obligations will be suspended without pay and benefits. Staff who honor this strike will be terminated. I for one am more concerned about educating our kids Remote learning is a failure. The so-called teacher's union is an abomination of self interest. Do you need any more proof?

You're 100% correct, noitall. LeRoy Coop is caving to the teachers. No science or data behind his decisions. Sad state.

It is far easier to feed kids bellies than their minds . Who has enough safe storage space , big enough freezers and the like , for all these prepackaged meals ? Of course that depends on what you call a meal . Obviously , nothing fresh or really nutritious in those meals . Perhaps they are military MREs .

The "food" that supplys the schools mostly comes from government stockpiles that were bought to support farmers. Catch 22 - everybody has a share - except the kids.

Instead of slamming our schools about this temporary closure, we should feel thankful that they've been open at all. From what I understand, many other districts in NC and other states have not had that.

A lame excuse don't you think? The teachers must perform to contract or be fired - And where is the scientifically verifiable data to support the "

Expected Spike" This is a pack of lies.

Pretty sure I told you so. This will become the normal way of education. Parents are doing a great job. Sure it's inconvenient for the parents. Those pesky jobs getting in the way and all but hey your kids are excelling. We may/will see another tax increase for sure. Remote learning is expensive. It's for the kids!

Was reported in Raleigh News and Observer , Dec 16 .

Durham public schools giving all students As on-end-of-course exams because of Covid .

Isn’t that nice . That will make them qualified to move on to the next level . Won’t it ?

“We have been reporting numbers for 18 weeks, and six of those weeks we have had 0 or 1 case,” he said. “The week after Thanksgiving, we had seven cases. The following week we had 21 cases. This week, we’ve already had six cases so far.”

You all need to read that again carefully, then think, then comment.

So? Any idea of the cause - could it be a prison, rest home, or a what.? It seems more than reasonable to provide data for such an outbreak. If you don't know then we should close everything now. Is this too much to ask? Why are you targeting the kids who ,per CDC do not get covid. This is madness. The teachers union is the problem. Prove I am wrong.

Curious if any of the complainers and second-guessers have volunteered time or treasure to help make things better for the students, staff and families?

Time? Yes to retrain and teach fractional math and spelling. to those you missed in school. Treasure? Taxes are treasure if put to good use. If wasted then NO. What did I miss, Jim.