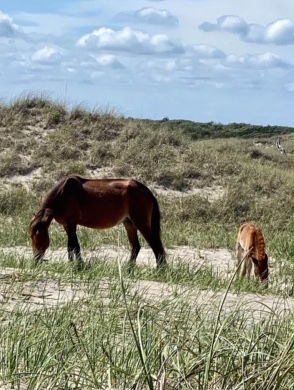 A Shackleford Banks mare and her foal graze Friday on the Outer Banks. The National Park Service is looking for information on three tourists who allegedly harassed the horses and chased the foal. (Contributed photo) 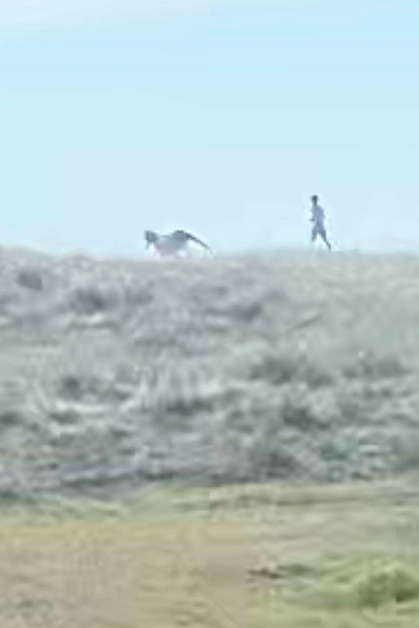 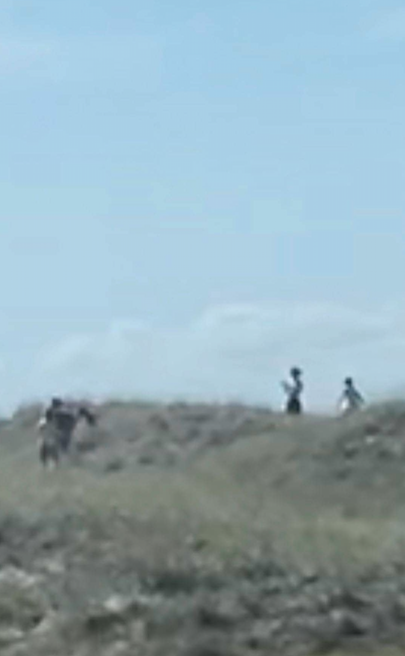 The Associated Press reported Sunday the NPS was looking for three tourists who’d allegedly tried to capture a month-old wild foal on Shackleford Banks Friday in order to “take some selfies.” The report said the three tourists chased the foal, scaring it to the point it became separated from its mother.

“People are very upset this occurred,” Mr. West said. “The mare and foal did make it back together, and they are fine. But this is simply senseless harassment of the wild horses; not only dangerous to them, but dangerous for the people approaching that close to the horses.”

Mr. West said they don’t have any suspects yet, but the NPS is hopeful someone can identify those responsible.

“If found, they will be prosecuted,” Mr. West said.

Federal regulations state touching, feeding or intentionally disturbing wildlife, including horses, is dangerous and could result in a fine.

U.S. Park Ranger Will Lawrence with Cape Lookout National Seashore stated in an email Monday the fine for harassing wildlife, including horses, is $200, plus a $30 processing fee.

“In an aggravated case Visitor and Resource Protection (Law Enforcement) might forego the fine and either arrest them or write the ticket with a mandatory court appearance,” Mr. Lawrence said. “In either of those cases the maximum penalty would be $5,000/6 months in jail.”

NPS guidelines for visiting Shackleford Banks and viewing the horses, available at nps.gov/calo/planyourvisit/upload/Horse2018_color_2_rev2019.pdf, advise visitors to stay at least 50 feet away from the horses.

The nonprofit Foundation for Shackleford Horses manages the herd.

The organization said a visitor reported witnessing the situation and intervened, prompting the three tourists wanting the selfies to take off.

Seems some people like to have fun on the beach just as they may do in the yard with their puppy. I was told by park Gestapo in the past that he better not see me feed the sea gull. What a government oversight, not seeing over themselves. On the other hand, when was the last time you've actually seen a police officer at the local abortion clinic stopping a murder of an unborn helpless child?

The point is, let's use tax payers money to do better than arrest beach goers and fun in the sun. Arrest murderers!

Give it a rest, will you? You nuts would bring abortion to a discussion on popcorn.

Years ago we used to feed the terns and gulls while riding the ferry to Cape Hatteras . Just to pass the time , even though a sign said not to . Imagine that ! All went well until the competition amongst the birds ramped up and they would actually take it out of our hands . Everyone thought it was so cool . Then the birds went into high gear and became quite aggressive and let me tell you they are quite well equipped to hurt you . No one was badly injured but several had scratches on their hands and a few faces . This exercise in fun could have gone the other way quickly . Just saying .

Panicking a colt is not fun . It is mean . Surprised that Mom didn’t intervene and break a few bones . This would have been a different story .

Same thing w/people who think it's fun to feed bears out in the mountains or try to get selfies with buffalo or elk. A lot of times people don't realize what can happen until things go bad. Just have fun at the beach, mountains, or wherever, but respect wildlife and the area you are visiting.

I am all for protection of the horses on the banks. That being said, feeding seagulls being a violation is over the top. We need less gestapo jackbooted thuggery, and leave us alone; as long as we leave the ponies alone. I am sick of there being a cop under every rock. How did we ever get along before the NPS took over and burned the cottages at Shackleford?

Aonario does have a great point; protect the seagulls, kill the unborn. Only makes sense to a sick mind.

Too darn bad the mare didn’t kick the daylights out of the fools. Leave the wildlife alone and stop ruining things for everyone else.