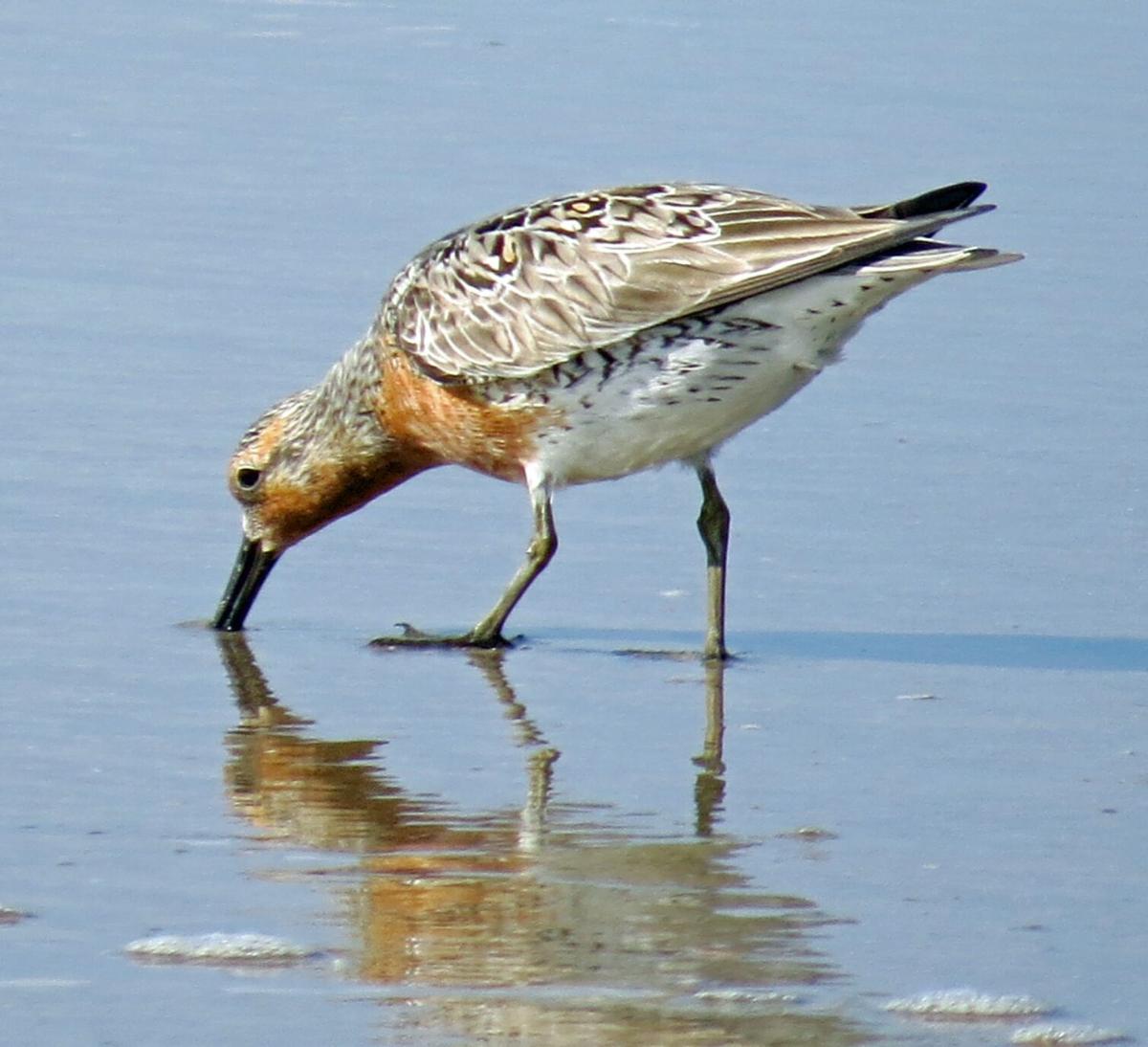 A rufa red knot feeds along the shore in this undated photo. Carteret County plans to oppose a critical habitat designation for the threatened bird. (Peter Vankevich/Ocracoke Observer via Coastal Review Online photo)

The U.S. Fish and Wildlife Service held a virtual public hearing on a proposal to designate hundreds of thousands of acres, including all of Carteret County’s ocean beaches, critical habitat for the rufa red knot, seen here. (Peter Vankevich/Ocracoke Observer via Coastal Review Online photo)

WASHINGTON, D.C. — Numerous speakers during a virtual public hearing Wednesday night urged the U.S. Fish and Wildlife Service to carry through with a plan to designate critical habitat — including all of oceanfront Bogue Banks — for the rufa red knot.

The rufa is a robin-sized sandpiper with a wingspan of about 20 inches and a ruddy head. The shorebirds visit North Carolina in the spring during their annual 10,000-mile migration from the southern tip of South America to the Canadian Arctic.

July 15, the USFWS proposed establishing critical habitat for the bird in many states, including all oceanfront Bogue, Core and Shackleford banks beaches. Other North Carolina areas proposed as critical habitat for the rufa red knot are beaches of Hatteras Island in Dare County, Ocracoke Island in Hyde County, Topsail Beach in Pender County, Fort Fisher in New Hanover County and Sunset Beach/Bird Island in Brunswick County.

The total proposed critical habitat includes nearly 650,000 acres of coastline from Massachusetts to Florida and along the Gulf Coast.

Although many spoke during the virtual public hearing, Amanda Biedermann, who hosted the session for the USFWS, said the record will remain open for written comments through Monday, Sept. 13.

Greg Rudolph, manager of the Carteret County Shore Protection Office, which oversees beach and dredging projects, as well as the county government’s responses to federal environmental and conservation proposals, said Thursday the county did not comment during the hearing, but will do so in writing by the deadline.

He’s definitely concerned about the impact of 150 miles of critical habitat designation will have on Carteret County.

According to the USFWS website, the designation “does not affect land ownership or establish a refuge, wilderness, reserve, preserve or other conservation area.” It does require all federal agencies, in consultation with the USFWS, to ensure “any action they authorize, fund, or carry out is not likely to result in the destruction or adverse modification of critical habitat.”

Mr. Rudolph said that is at best worrisome for some county activities.

In an email Wednesday, he said impacts “potentially include activities or programs of any kind authorized, funded, or carried out, in whole or in part by federal agencies pertaining to coastal and inlet management activities, the National Flood Insurance Program, implementation of building codes, federal grants for public access and infrastructure improvements, and other programs/policies.”

In a phone interview Thursday, he said he’s making information available to county municipalities and urging they make official written comments to the USFWS, as well.

Many of the speakers during the hearing were from Delaware and New Jersey, where the decline in the rufa red knot population has been most noticeable.

This year, according to an email from the National Audubon Society, the number of rufa red knots visiting Delaware Bay beaches during this spring’s northbound migration was the lowest since counts began almost 40 years ago. Audubon has made saving the red knot from extinction one of its top priorities.

The Delaware Bay area has long been a crucial stopping point for the rufa red knot, chiefly because it has had an abundance of horseshoe crabs, a major food source for the bird. The crab population has also declined as it’s used for production of fertilizer and the crab’s blood is used by pharmaceutical and medical device manufacturers to test products, according to National Geographic.

Faith Zerbe of the Delaware River Keeper Network, speaking during the hearing, urged the USFWS to do all it can to protect the bird, as did John Gfrorer of New Jersey.

“I support the critical habitat designation,” he said, and added that he believes the rufa red knot is “below or near the extinction threshold.”

Mr. Rudolph said he was not surprised speakers from the Delaware Bay area turned out for the hearing to support critical habitat designation.

“That’s where the horseshoe crabs (historically) are and where the red knots are,” he said.

Mr. Rudolph last month said Carteret County and everyone involved in the region have been waiting for more than five years for the USFWS designate rufa red knot critical habitat subsequent to the agency listing the species as threatened in late 2014.

“Our position, in written comments, focused on the fact that we do not possess major spring stopover areas and (we) contended the county should not be included in the critical habitat designation,” he said in an email then.

In its Federal Register posting of the habitat areas, the USFWS states the birds “depend on multiple foraging and roosting habitat areas on local, regional, and range-wide scales. It also states the shore habitat is threatened by rising sea level and shoreline stabilization.

Note: Amanda Bidermann is an environmental planner . She is employed by Environmental Management Solutions INC , Boulder , Colorado . A for profit company .

So organized environmentalism goes head to head with beach nourishment and creating no-go areas up and down our coast . All to protect an obscure shorebird that visits our area while migrating . Sort of flies in the face of those that wish to pack our beaches with free spending tourists year round , does it not ? Going to have to hire a band of Rufa Red Knot protection officers for this endeavor .

California is allowing perfectly good water from the Sacramento River e to flow to the ocean to protect the life of the Delta Smelt. Our family lives in the Delta for over 100 years and no one has EVER seen a delta smelt. That is rare but still must be protected. Right? This is the first shot of the new resilience normal - save the bird above all. Right? Save whatever to establish control of our lives. Environmental planner if there is such a thing outside of mother nature will wiled a big stick plus red tape like you have never seen.

Discussions such as these over the fate of a species trouble me. As extinctions continue to be trivialized as secondary to economic gain, can our own extinction be far behind?

Secondary economic strain is a bit of aq stretch. California is allowing precious water needed for ALL species to flow into the ocean where fresh water is not even wanted?? Conciser that our own species may be on irreversible slide to extinction right now, The forces needed are already there and are in action. Wake up Saving the bird is a useless exercise in self.

Various species have lived and died off for millions of years , only to be replaced by others . Must be a new species factory somewhere . Anyhoo , strongly suspect this will continue till the end of recorded time . Not to worry , enjoy and lighten up !

Anyone interested in data regarding the Red Knots can access ebird.org, under: 'explore species', type in the species name, click on 'large map' for easier viewing of where a bird or flocks of birds have been seen world-wide. Zooming in on Carteret county and the sitings of the species shows impressive numbers at specific times of the year. 'Moonbird' by Phillip Hoose is a recommended book for understanding and appreciating their migratory patterns and food requirements along the way.

It's amusing to hear that new species are being and created and replacing those poor souls that fall victim to the forces of nature and how man has changed the planet. I have read many many articles here and many other sources and I have certainly never heard of creatures, and I suppose plant life being replaced by new forms of life.

I do understand that some bacteria and viruses are commonly evolving but not in the bird world that I know of. I do know that people create there own history, but wow, creating science. That is interesting. All new replaceable birds.

This is getting a bit silly . The new species factory was a joke . Never dreamed anyone would take it seriously but ….. .

Assuming that your quick fill got the best of you , mine often does . Creatures that have died off and /or otherwise gone . Dinosaurs , Woolly Mammoths , Sabertooth Tigers , Dire Wolfs and every kids favorite the Megladon , to name a few . I guess a replacement for the Thunder Lizard would the local Anole lizard . The Meg would be a Great White . The others are in various zoos .

Humans , well , depends what you believe . Either from Eve’s rib or from Neanderthals . Of course I have heard rather often that they are still about today .

The red knot is destroying the horseshoe crabs. They eat them and kill them even tho this ugly animal the crab gets no media. The horseshoe has some medicinal value to us but the knot has more charisma.

Is the red knot good to eat? If yes then the problem is solved

Perhaps the turtle people could be enlisted to protect the Horseshoe crabs from the marauding red knots . Appears to be happening on the same patches of sand . Sadly Horseshoe Crabs are not particularly warm , fuzzy and cuddly . Sort of like the proverbial red headed stepchild .