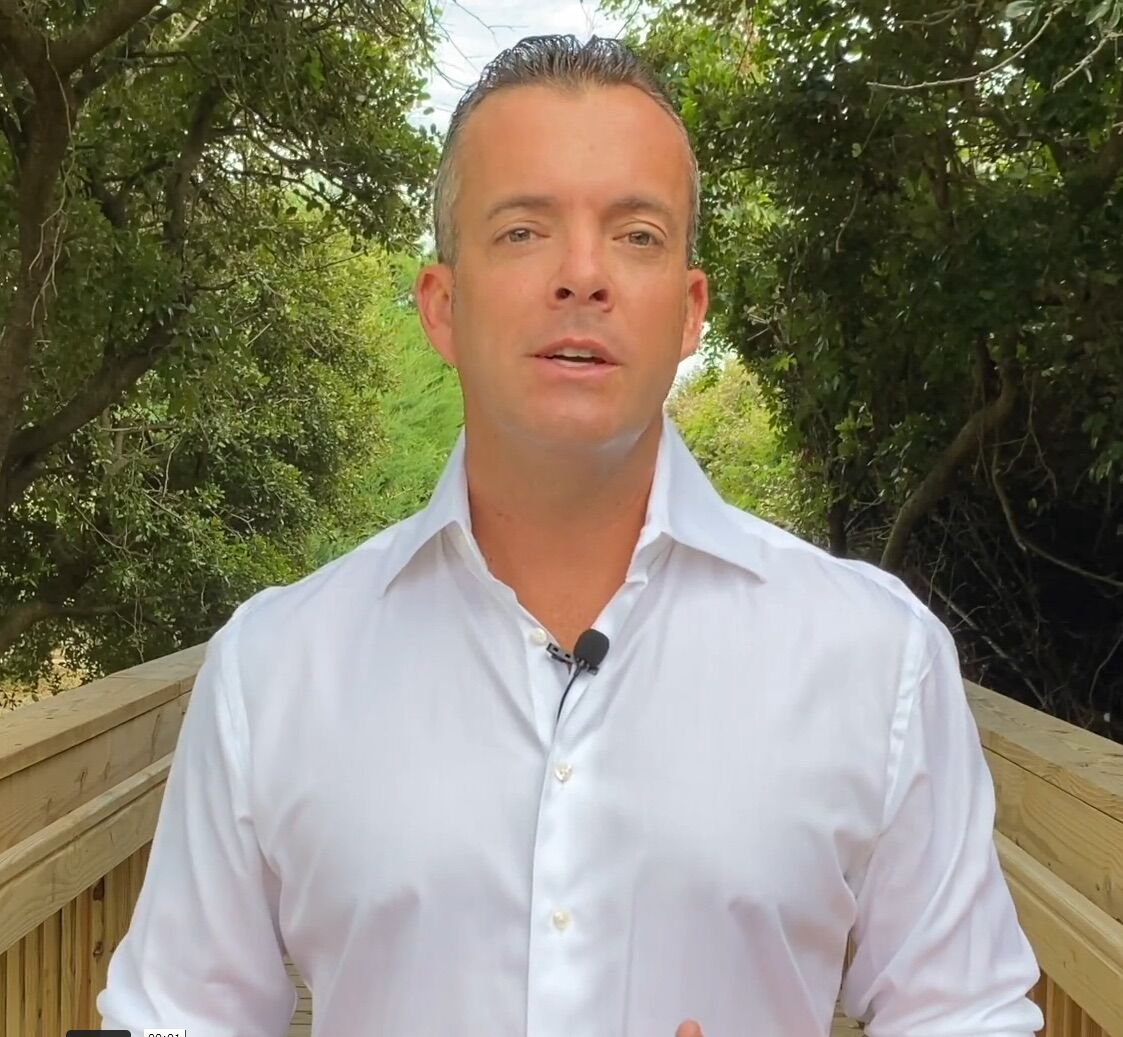 In a video on his campaign website, Emerald Isle mayoral candidate Doug Starcke speaks of his 2011 “situation,” which resulted in a felony conviction for assault on his then-wife. (Brad Rich screenshot) 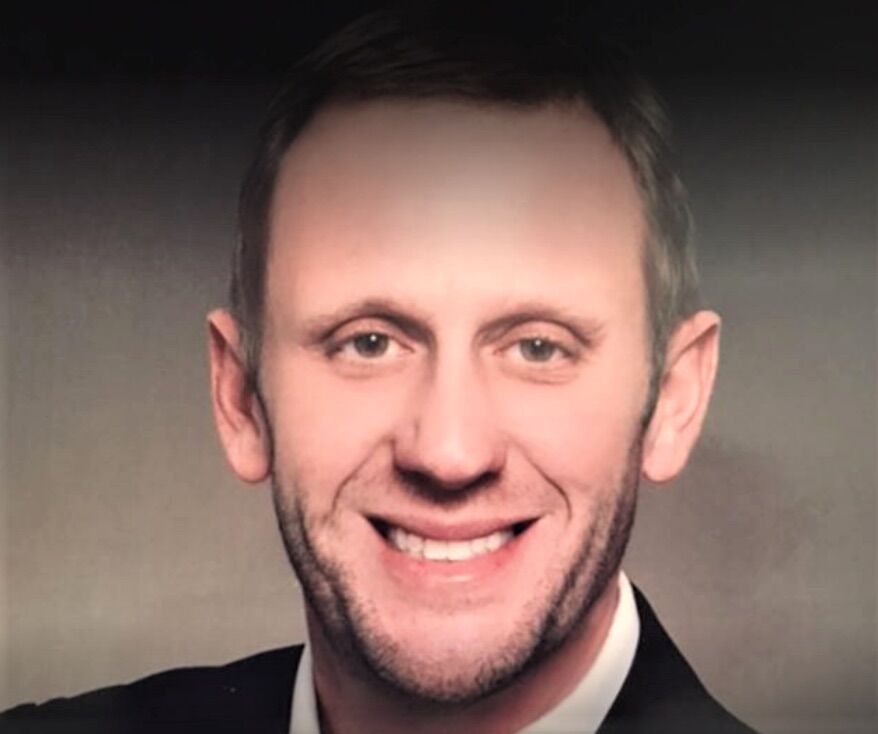 In a video on his campaign website, Emerald Isle mayoral candidate Doug Starcke speaks of his 2011 “situation,” which resulted in a felony conviction for assault on his then-wife. (Brad Rich screenshot)

EMERALD ISLE — Emerald Isle mayoral candidate Doug Starcke recently posted a video statement on his campaign website relating to recent social media revelations of his felony conviction on a count of assault by strangulation connected to a July 2011 incident.

He pleaded guilty Dec. 12, 2012, in Carteret County Superior Court for assaulting his then-wife, and also pleaded guilty to two misdemeanors — assault inflicting serious injury and assault on a female.

He received a sentence of six to eight months, suspended for 60 months with supervised probation, on the felony charge. The court sentenced Mr. Starke at the same time to 150 days in the county jail, to be served three days per month, on the misdemeanor charges.

He also had to pay court costs and have no contact with the victim or her family.

Mr. Starcke then filed a civil lawsuit in 2012, alleging adultery by his wife and alienation of affection by her alleged girlfriend. The suit was later dismissed.

The victim, in a phone interview Thursday, said the attack was not a push-and-shove situation, but a four-hour horrific beating that left her with eyes swollen shut and bruises all over every square inch of her body.

In the campaign video titled “Focus on the future,” Mr. Starcke does not specifically address the charges or the convictions.

“A little over a decade ago, there was a situation,” he states. “It’s not something I’m proud of, and there was accountability for the necessary parties.”

The universal settlement, he said in an email interview, is what he meant in the video when he said there was “accountability for the necessary parties.” He includes himself in that “accountability.”

The victim said Mr. Starcke has never apologized or taken responsibility for his actions.

“I wish him well in his run for mayor but I hope he admits that domestic violence is never acceptable to the citizens,” she said. “I’m saddened in the fact he was not transparent from the start. I hope he will be transparent to his citizens.”

In the video, Mr. Starcke calls the 2011 incident “an anomaly,” and urges potential voters to “judge me cover-to-cover as if you are reading a novel,” and to consider his actions and deeds over the decade since the assault and court convictions. He says while those decade-old “pages are an important part of my life,” the period “does not define who I am.”

Mr. Starcke, 41, co-owner of South Swell Surf Shop in Emerald Isle, and a former co-owner and managing partner of First Fight Solutions, is a lifelong resident of Emerald Isle.

In an email interview, he said he served the full 150-day sentence and said his media team filmed the video “in early September as we were mapping out our campaign.”

“For anyone who thinks my family and I went into the race with the thought my past would not come up, they are mistaken,” he added. “With today’s political climate, we knew there was a 99% chance that my candidacy would bring to light what happened over a decade ago.”

He said he decided to run for mayor only two days before the end of the filing period when he saw that only one newcomer had filed and Mayor Eddie Barber announced he would not seek reelection.

Mr. Starcke said he disclosed his convictions, as required, in the paperwork he filled out and filed at the Carteret County Board of Elections to run for mayor. The video was not required, Mr. Starcke said, but was “extra from my campaign to connect with the citizens of Emerald Isle.”

Caitlin Sabadish, BOE director, confirmed that Monday. The form states Mr. Starcke was convicted of a Class 1 felony and his citizenship was restored

Mr. Starcke said he learned from his actions, the charges and the court case and has worked on himself since then.

“In 2013, I took it upon myself to start the Starcke Family Foundation, with the sole purpose of giving back to my community through finances and efforts, as I worked diligently to earn my position back in society and prove this was in fact an isolated incident,” he said in the email interview.

The foundation, he said, has since that time contributed to many charitable organizations, including domestic violence, and to institutional building projects in the county.

According to the website of the UNC School of Government, “Conviction of a felony bars a person from exercising various ‘citizenship’ rights, such as the right to vote, hold public office, and sit on a jury. Generally, these citizenship rights are automatically restored in North Carolina when a person completes his or her criminal sentence.”

Mr. Starcke and Jason Holland are facing off in the Tuesday, Nov. 2 municipal election for the mayor’s seat now held by Mr. Barber.

The News-Times is not naming the reported victim in this case, who is a minor.

The town did not have any record of the case this week, because it was expunged, according to town manager Matt Zapp.

A spokesperson for the Carteret County Clerk of Court Criminal Division said Monday there was no record there and expungement means it no longer exists. Cases are expunged under North Carolina law include cases that were dismissed by the court.

Mr. Holland told the News-Times the accuser said some things after a family incident, then recanted those things in court and the charge was dismissed Sept. 14. The incident occurred July 18, according to the now-expunged police report.

Correction: Story has been edited to correct and clarify Mr. Starcke's business activities.

Wow! Thank you for bringing this to light. As a Emerald Isle Resident I had no idea. I have a hard time voting for someone that has a felon for domestic violence. It is nice that he is donating money to the Domestic Violence now but…..

So Emerald Isle is running family beaters against each other for Mayor?

Man, good to know we can just get cases against us just dropped in Emerald Isle and Carteret county.

I was worried since Carteret County is 90% Republican we might be one of those law and order counties.

I gasped when I saw this article. It appears that criminals have a stranglehold on the politics of Emerald Isle. Hopefully the citizens can wrap their hands around this problem.

Well I would say assault on a female is no laughing matter, but that would be rather hypocritical since I was laughing at your clever word play.

I have mixed feelings, ppl make mistakes, and having paid for them ( or to get out of them) they should be able to start fresh.

Having said that, Good lord, does no one who needs not start afresh want to be mayor of e/i? Jeez !

I didn't even know a person could serve jail time on the weekends. What a sweet set up, so lucky for them that they had $$$ to make it happen.

News Times may want to do a little more research: Doug was born in New York. That would not make him a "lifetime resident", it means he lived here for most of his life.

Also, had either one of these folks been POOR and white... or heaven forbid, black, neither one would be running for mayor today, as they'd still be in jail.

We all know what kind of influence they used to evade consequences. They'll do whatever they can to scratch backs to keep their arrangements going. :(

Politics makes for strange bedfellows . Who said that ?

How can you say that , Native ! You know that EI would do so well under a Lori Lightfoot .

Honestly, this is shocking. Emerald Isle is a "family friendly" little town, and the only two candidates for Mayor are both domestic abusers?! ... Really disappointing that out of all the fine citizens we have living on this island, we're stuck between a bully and a bully with more money. Come on. This is embarrassing! No doubt they'll use their influence to strengthen the good old boys network that kept them out of facing serious consequences. FOR SHAME.

This is from the article

“The victim, in a phone interview Thursday, said the attack was not a push-and-shove situation, but a four-hour horrific beating that left her with eyes swollen shut and bruises all over every square inch of her body.”

Doug Stark should concede his candidacy now. It’s embarrassing enough for him, no need to embarrass the town any further.

And this article should still be front and center in the news, not buried. EI residents need to get vocal.

100% agree Big Fat Drunk Republican. I also think that Carteret Community College needs to rethink about having him as a Trustee on their Board. It was an interesting conversation explaining to my granddaughter, that attends the college, how he can serve on the board. I believe there are many other Carteret Residents that would make a better role model for our youth.