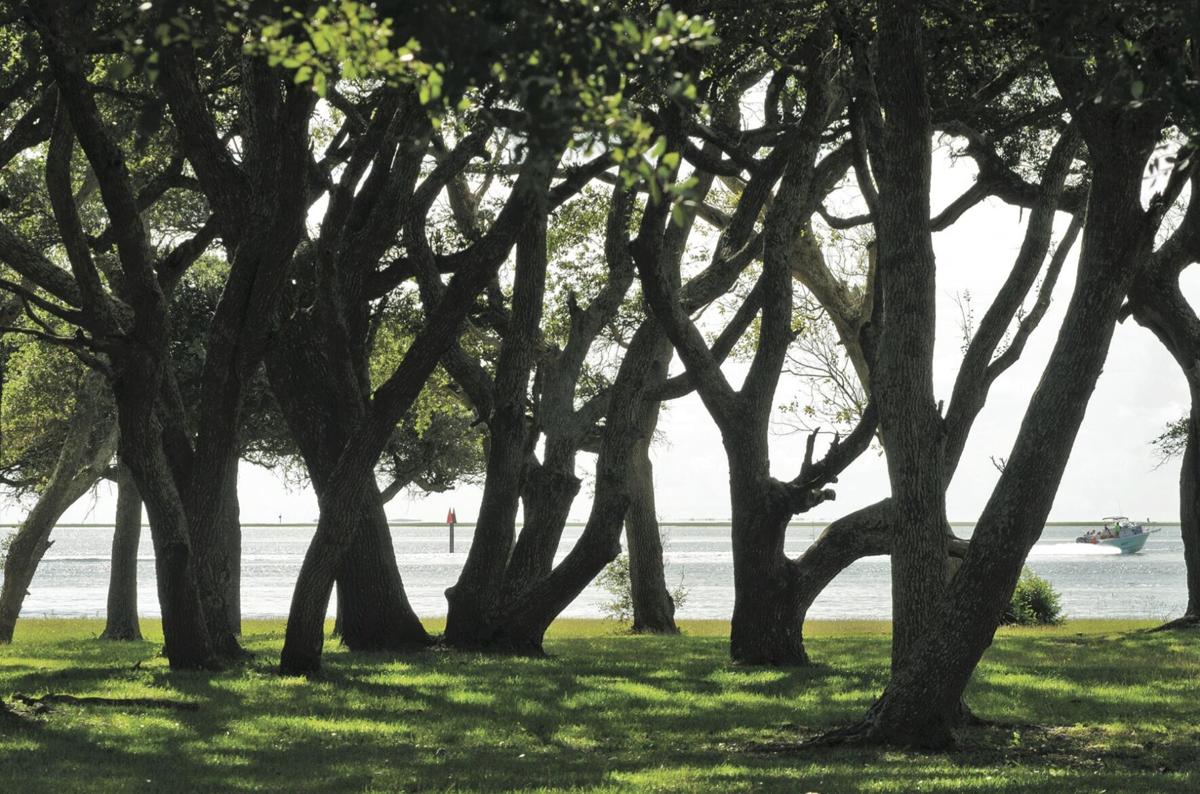 A recreational boater passes through the narrow shallows at the east end of Taylor's Creek in Beaufort in this file photo from 2017. Carteret County has secured state and federal grants to dredge the waterway and deposit the spoils on Radio Island as nourishment. (News-Times photo) 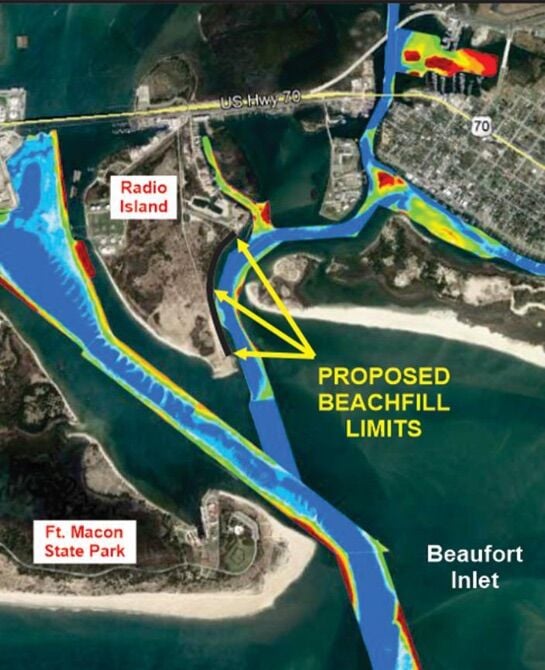 The yellow arrows on this graphic point to where beach nourishment would occur on Radio Island in a project planned by Carteret County. The effort also includes dredging and realignment of east Taylor’s Creek. (Carteret County Shore Protection Office graphic)

EMERALD ISLE — Carteret County’s proposed project to dredge east Taylor’s Creek and use the sand to nourish the public beach and other areas on Radio Island is almost surely a “go.”

Greg Rudolph, manager of the County Shore Protection Office, said Tuesday the county already had a $1.3 million grant from the N.C. Shallow Draft Navigation Channel Dredging and Aquatic Weed Fund for the estimated $1.95 million project and now has a $650,000 U.S. Department of Defense grant to use as the local match. The DOD approved the grant last week.

The state fund, which gets revenue from boat title fees and the boat fuel tax, pays two-thirds of the cost of such waterway projects.

Several years ago, the county began planning a project to dredge and realign east Taylor’s Creek to match the rest of the waterway, along the Beaufort waterfront. The idea at the time was to deposit the spoils on the Atlantic Veneer property off Lennoxville Road in Beaufort.

However, Mr. Rudolph earlier this year pitched the idea of using the dredged material instead on Radio Island, where erosion increased after Hurricane Florence in 2018. The County Beach Commission, which advises his office, agreed and also endorsed applying for the DOD grant, which it did in July.

In addition to the public beach on the north side of Radio Island, material will be placed along Marine Road, which the U.S. Navy uses, and where erosion threatens two power poles. That was key to getting the federal grant, as was the fact that the county’s beach access is heavily used by military families.

The next step, Mr. Rudolph said Tuesday, is to get the state Division of Coastal Management to amend the permit to switch the deposit site of the dredged material from Atlantic Veneer to the island. He doesn’t anticipate that being a problem, but said it could take some time. In addition, the county needs to go out for bids and approve one before work can begin.

Mr. Rudolph said he hopes to kick off before the end of the year, but said a January start should be soon enough to enable the dredging to be complete by the Friday, April 1 environmental deadline.

The goal is to use a 3.5-mile-long pipeline dredge, instead of a bucket dredge boat and barge, to carry the material from the creek to the island.

“The project would move much faster that way,” Mr. Rudolph said.

The spoils are to be spread roughly from Old Town Yacht Club southward, parallel to Marine Road to the land craft utility ramp and bulkhead, approximately 2,800 linear feet.

Mr. Rudolph said the Navy has been trying for some time to put rock along Marine Road to protect it from erosion, and the additional sand would be more room for the rocks.

In announcing approval of the grant, the DOD said “the project will carry out shoreline and infrastructure protection measures on Radio Island. The project …will include restoration of a beach and dune system to mitigate erosion problems.”

So they're gonna add more sand to gallants channel where they just had to dredge two years ago!!!