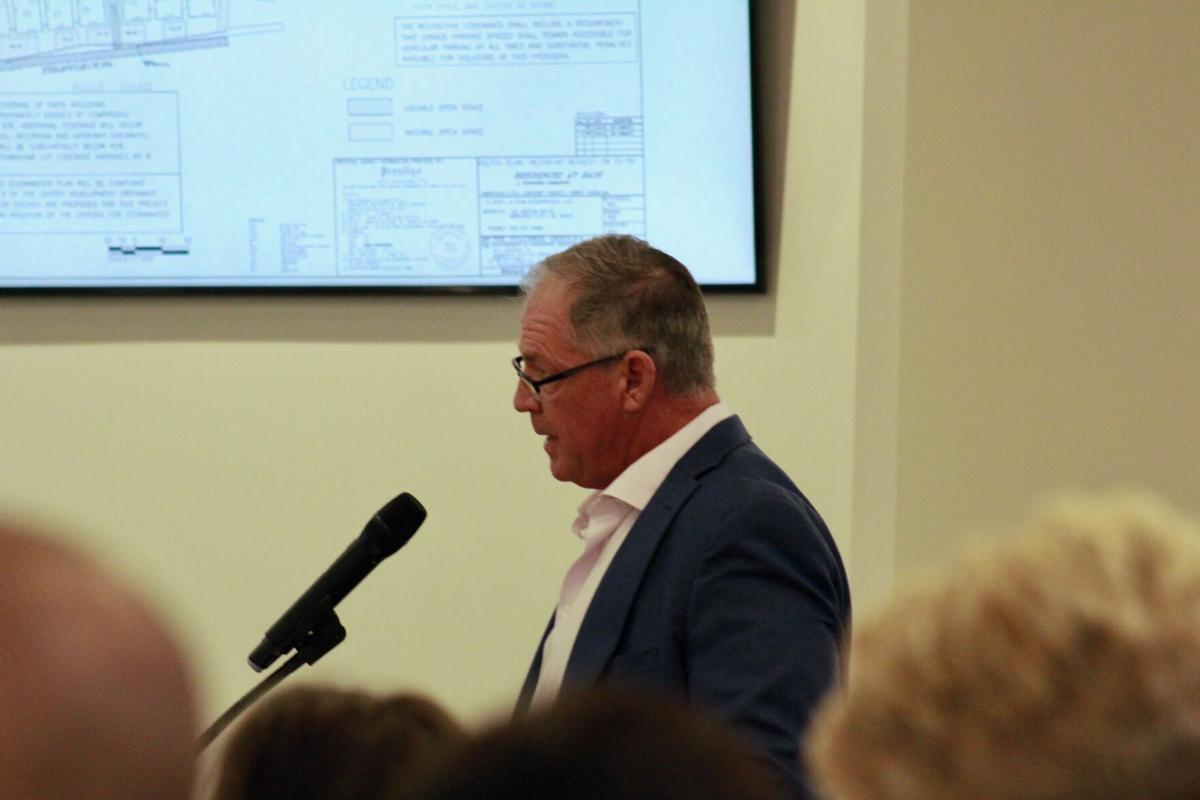 Curtis Struyk with A-Team Enterprises addresses the Morehead City Council during a public hearing Tuesday on a requested rezoning for property on Shepard Street his group proposes turning into a condominium complex. (Elise Clouser photo) 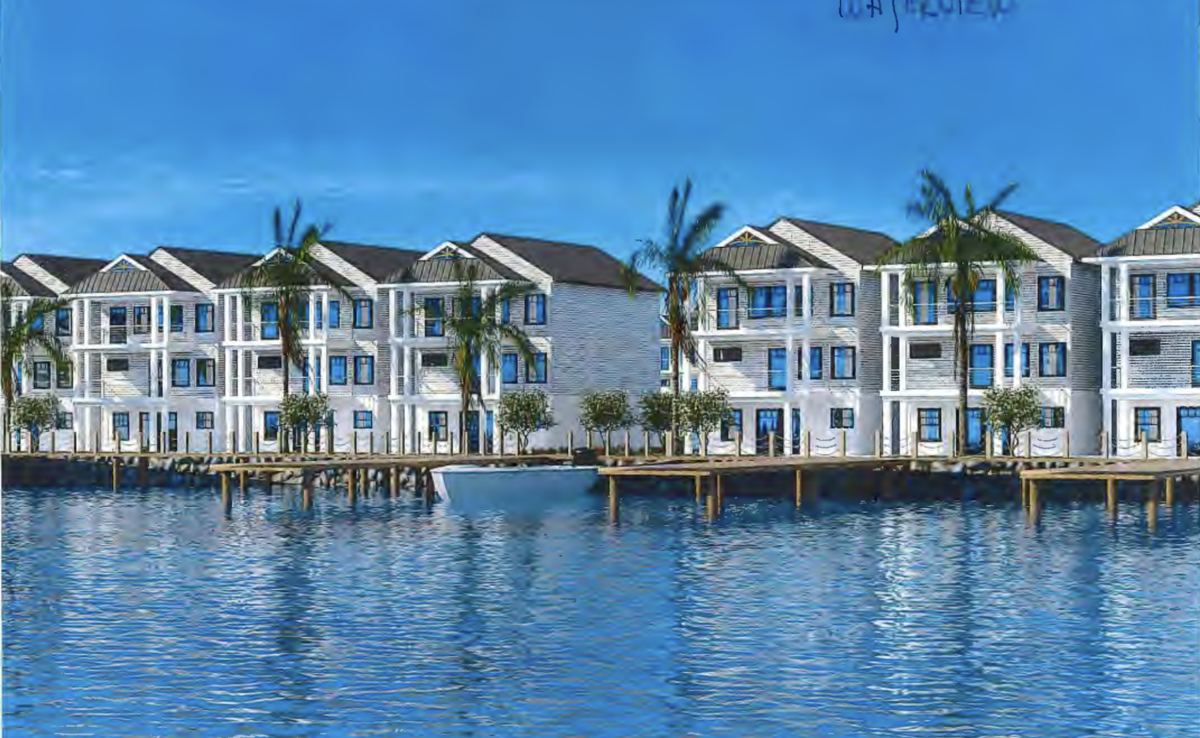 This artist’s rendering shows the proposed exterior design of condominium complex on the Morehead City waterfront, as seen from the water. The city council approved a rezoning for 901 and 909 Shepard St. to allow the proposal to advance. (Contributed rendering)

MOREHEAD CITY — New residential development could be coming soon to the Morehead City waterfront with the city council’s unanimous decision Tuesday evening to rezone a property for a proposed condominium complex on Shepard Street in the heart of downtown.

Supporters and detractors of the proposal attended a lengthy public hearing on the matter at the monthly council meeting Tuesday at city hall, packing the council chambers nearly to capacity. Developers A-Team Enterprises LLC – the group behind several other high-profile developments in Carteret County, like the Village West mixed-use development in Emerald Isle – and engineers working on the project attended, as well.

A-Team proposes building a high-end, 30-unit condo complex to be known as the Residences at Bask at 901 and 909 Shepard St., a roughly 2.4-acre parcel currently occupied by a defunct business on one half and an undeveloped grass and gravel lot on the other.

“Our goal as a group is to positively impact the community by providing much-needed housing that visually complements the Morehead City waterfront and surrounding architecture,” said Curtis Struyk, a representative with A-Team as he introduced the proposal to council members Tuesday evening through design renderings and sketch plans.

Before plans could proceed further, developers first had to secure a rezoning to change the property from a commercial marina (CM) district to the planned development (PD) district. That rezoning is what the council decided Tuesday night, along with approval of the sketch development plan.

The council’s decision does not, however, mean all plans are finalized at this stage. As planning director Sandi Watkins and city attorney Derek Taylor helped explain, under the PD zoning process A-Team has chosen to undergo, the only details that are set at this point are the general concept plan and the proposed density, which comes to roughly 12 units per acre.

All other details, like a parking and vehicular access plan, building layouts and other specifics, will come before the council for further review at a later date, and changes to the proposed use or density would force the project back to the sketch development plan phase, requiring additional council approval.

“Tonight, all you’re really dealing with are two basics, that is: use – is it better to have it residential than a marina and all the uses within a marina (zoning)? – and secondarily, density,” Mr. Taylor said.

The developers argued their plan for condos was preferable to what would be allowed on the property under the CM zoning, such as a dry stack boat storage building. Mr. Struyk showed renderings of a dry stack building and compared them to the proposal set forth by A-Team, pointing out the residences would add to the city’s tax base and complement the residential nature of the area.

To bolster the developer’s position, Mr. Struyk also addressed many of the concerns brought up by neighbors during the planning board meeting on the topic last month. He showed how the plans aim to reduce the amount of impervious surface, add back public parking spaces downtown and lessen traffic.

Though several attendees spoke in favor of the project, the opposition was much more vocal Tuesday. Around a dozen people, many of them close neighbors to the Shepard Street property, brought up a wide swath of concerns ranging from parking and traffic safety, to drainage and flooding, to aesthetics and community preservation.

“I feel like we need to think of Morehead City not just today, but into the future ­–­ does this fit in, is this the right direction?” Shepard Street resident Mike Thomas posited to the council.

Parking was a salient topic throughout the discussions, with many residents pointing out the undeveloped property is currently used as a public lot during large-scale events and removing the spots would likely contribute to the problem of limited downtown parking. Others were more concerned about how the development could impact existing drainage issues in the low-lying neighborhood, especially in light of king tide flooding over the past weekend.

On the side of the developers, some residents brought up that the project could add much-needed housing to a desirable area in Morehead City.

“I’m in favor of this, especially over any kind of dry stacks,” said Doyle Kilman of 900 Shepard St., directly across the street from the property under consideration.

Several people suggested if the development is allowed to proceed, the city requires extension of a public sidewalk so as to preserve access to the waterfront. Samer Hamad with A-Team Enterprises said his team was willing to look into it and possibly work with the town on a solution, as requested by Councilman George Ballou.

Mayor Jerry Jones closed the public hearing after about an hour-and-a-half of comments.

They asked plenty of questions of developers and city planning staff, but council members seemed receptive to the plans and supportive of the rezoning. After appearing satisfied with the answers to their questions, the council voted unanimously – with Councilwoman Keri McCann absent for what would have been her last full meeting on the panel – to approve the rezoning request and sketch development plan.

Two weeks after the city election the MHC council rezones this area.I saw a honey dipper with signage that said" This tank is full of political promises"

Just what we need. More housing for rich out-of-towners that 90% of the community can't afford to live in.

This might be a good observation on your part but… the two families (heirs) who sold the 2acres are long time morehead city residents. They listed it for sale and I believe the total for both pieces is about 6 million. They are entitled to get all they can for their property. The group that bought it are also long term morehead residents who had a right to buy it and develop it. The ultimate rezoning was WAY better than the commercial marina zoning which would have allowed restaurants, motel, giant boat storage etc.

So property rights are strong, and should be, and this zoning was the best for the neighborhood considering the alternatives.

What else would you put.there ? Long sold out to the monied who would invest , so welcome them . They will be short lived .

How do you define "Defunct business?"