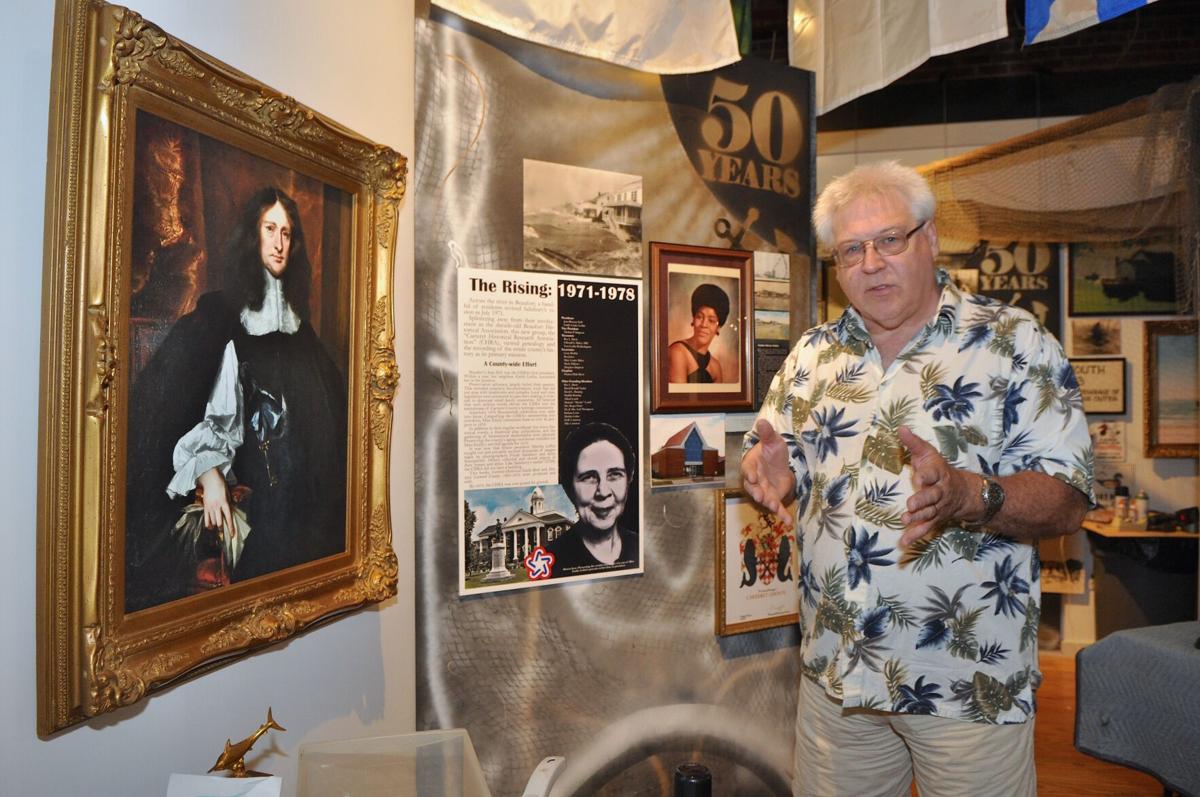 Steve Anderson, director and curator of the History Museum of Carteret County in Morehead City, talks Monday about a new exhibit on the county’s history that will open to the public Tuesday in celebration of the 5oth anniversary of the Carteret County Historical Society, which operates the museum. (Cheryl Burke photo) 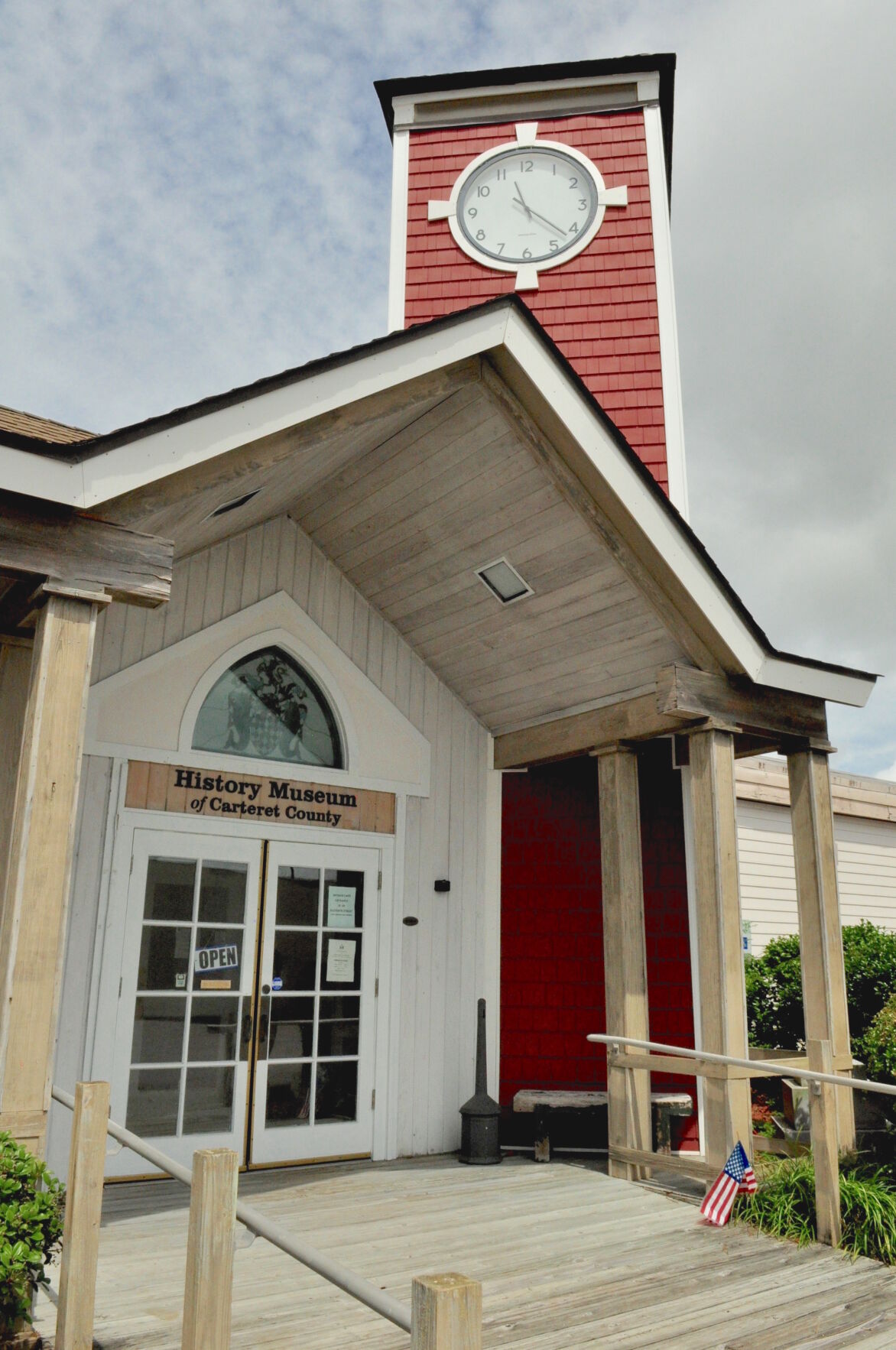 The Carteret County Historical Society will celebrate its 50th anniversary with the opening of an exhibit Tuesday at the History Museum of Carteret County in Morehead City. (Cheryl Burke photo) 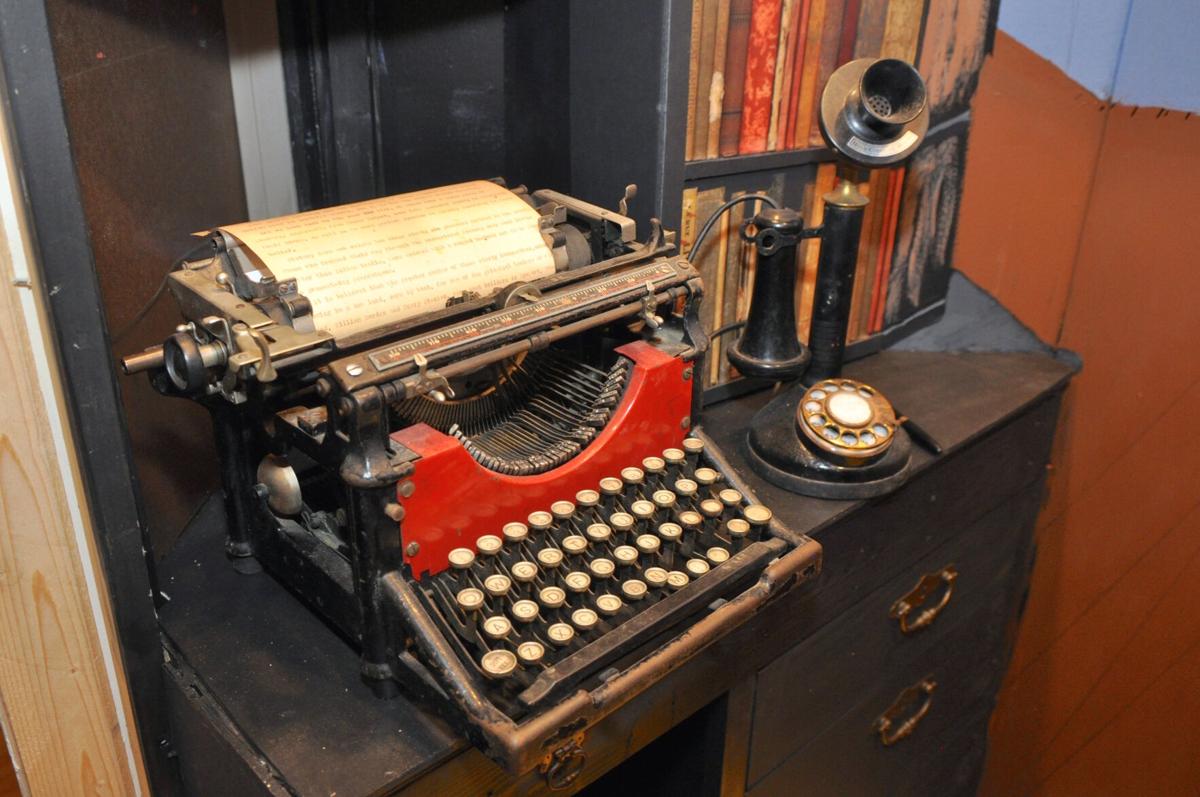 This old typewriter and phone are some of the many items featured in the “Anchoring Our Past to the Present” exhibit that will open Tuesday at the History Museum of Carteret County in Morehead City to celebrate the 50th anniversary of the Carteret County Historical Society, which operates the museum. (Cheryl Burke photo)

MOREHEAD CITY — It’s been 50 years since a group of residents passionate about Carteret County’s past created the nonprofit now known as the Carteret County Historical Society.

To celebrate the 50th-year milestone, the historical society will unveil a new exhibition and feature film on the county’s history from 10 a.m. to 4 p.m. Tuesday at its museum at 1008 Arendell St. in Morehead City.

“Anchoring Our Past to the Present” is a 480-square-foot installation that provides a window into the historical society’s first 50 years. The exhibit also guides visitors, using artifacts, photographs and documents, through a virtual countywide tour, from Down East to western Carteret County.

Utilizing the historical society’s vast collections, the exhibit covers the people, places and events over the last 300 years that have made Carteret County what it is today.

“I’ve attempted to overwhelm one’s senses with a staggering array of images, objects and topics that make up this county’s extended history,” museum director and curator Steve Anderson said.

A preview of the exhibition and premiere of the film will take place for the historical society’s 600-plus members from 10 a.m. to 4 p.m. Saturday. The film will be shown in the event center of the museum every half hour throughout the day. While no reservations are necessary, you must be a member in good standing to attend this exclusive event.

For the past year, Mr. Anderson has researched, designed, fabricated and overseen the installation of the exhibition.

Visitors will be greeted at the beginning with a portrait of Lord Carteret, the original British lord proprietor who owned the land now known as Carteret County.

“Essentially the King of England gave him the land now named in his honor,” Mr. Anderson said Monday during a quick tour of the exhibit. “If anyone wanted land here, they had to go to his descendants to get the land and had to get the king’s permission. We actually have transfer deeds from 1710 and 1720 of people purchasing land.”

While each section of the exhibit features unique artifacts and history focused on various areas of the county, Mr. Anderson said he’s especially excited about unveiling a 30-minute film titled “Rambling with Rodney Through Carteret County.”

The film, funded by the Big Rock Foundation, features local historian Rodney Kemp, who is known for his unique and personal approach to a variety of topics involving the county’s past. Following the lead of Frank Salisbury, a historian active here in the mid-20th century, Mr. Kemp and Keva Creative of Beaufort will take audiences on a modern-day historical “ramble” across the county. The film features interviews and observations in Mr. Kemp’s unique, but always memorable “fish house liar” approach to the past.

As for other interesting parts of the exhibit, there are a variety of photos from the late photographer Jerry Schumacher, who documented much of the county from 1951-58, as well as other late photographers. Some of those include images of Bogue Banks prior to construction of Highway 58 from Salter Path to Emerald Isle. During that time, there was a ferry that traveled from Emerald Isle to Cape Carteret in lieu of a bridge. Some of the photos show old mule drawn carts in 1911 making their way along a sandy road in what is now Pine Knoll Shores.

Blended into the history of the county is a documentation of the historical society, which started with a handful of people who met from house to house. It wasn’t until the tenure of the organization’s late president, Kay Hewitt of Newport, that the group acquired the former Camp Glenn Methodist Church, which used to sit where the former Wendy’s is located on Arendell Street near Carteret Community College.

The society, which at that time was the Carteret Historical Research Association, also purchased about an acre adjacent to the CCC campus. The church was moved to that location in 1985, and the structure renovated for the organization’s museum and headquarters. In 1986, the group received a new charter as the Carteret County Historical Society.

As the community college campus expanded, the society saw an opportunity to sell its property and building to CCC and use those funds to purchase the former Heilig Meyers Furniture/Colonial Grocery building at 1008 Arendell St. The society purchased that building in 2000 using the $375,000 it had received from the sale of the college property.

The society then faced a massive renovation project and obtained a $200,000 U.S. Department of Agriculture loan. Mr. Anderson said much of the work was done by volunteers, who had to completely gut the old store. The museum opened in November 2001 as The History Place. The group later changed the name to The History Museum of Carteret County.

Admission to the museum is $3 per adult, ages 18 and older, and $1 per child, ages 5 to 17. Infants are free. Museum personnel ask those who have not yet been inoculated against COVID-19 wear a mask as all of the staff volunteers are seniors. The museum’s staff has been inoculated against the virus, according to a press release issued about the exhibition.

For more information, contact Mr. Anderson by email at museumdirector.cchs@gmail.com, phone at 252-247-7533 or visit carterethistory.org or the museum Facebook page, History Museum of Carteret County.