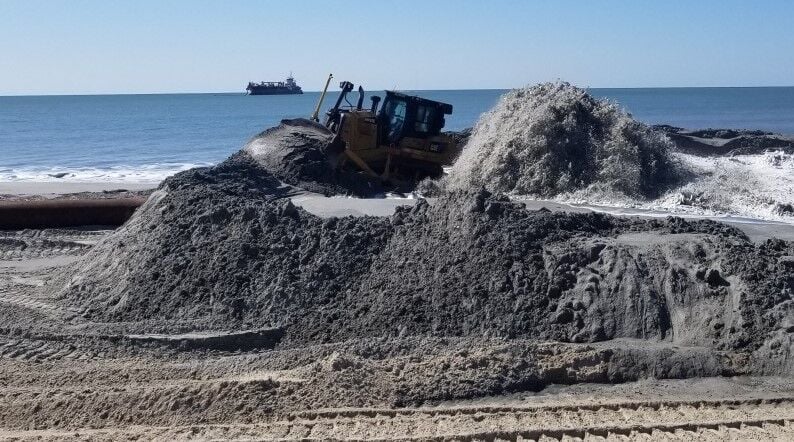 Beach nourishment will begin again in Emerald Isle late this year or in early 2021, as bids for the next project came in within Carteret County’s projected budget Monday. (Carteret County Shore Protection Office photo) 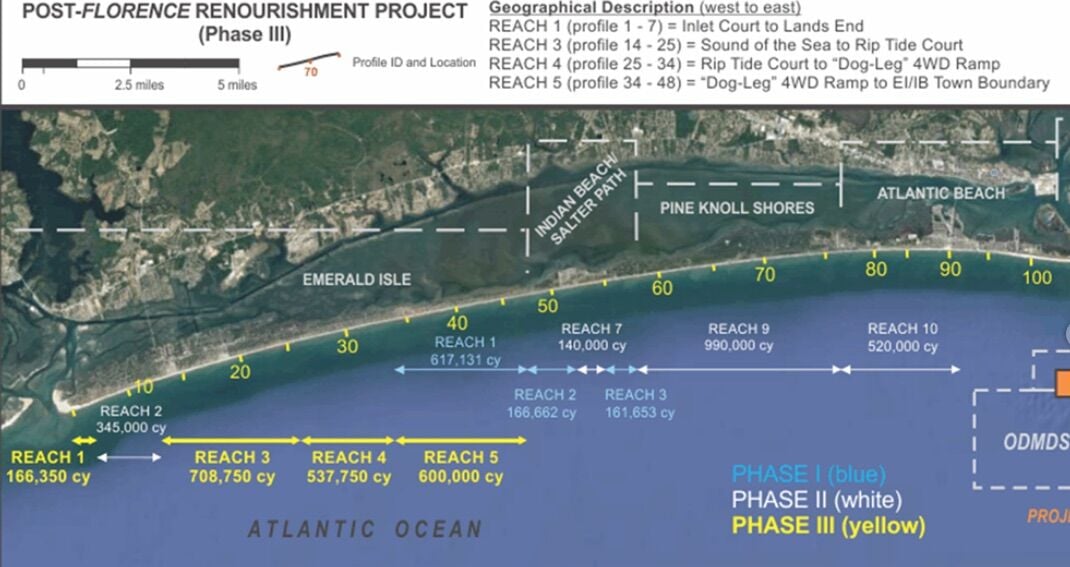 The language at the top of this graphic details the boundaries of each of the four sections of Emerald Isle scheduled for beach nourishment. The yellow numbers at the bottom show the cubic yards of sand planned for each section. (Carteret County Shore Protection Office graphic)

EMERALD ISLE — Carteret County Shore Protection Office Manager Greg Rudolph said Monday he was “stoked” after bids for the next beach nourishment project in Emerald Isle came in within budget and about $14 million below the high end of the cost estimate.

The county opened the bids for phase three of the post-Hurricane Florence beach project in the commissioners’ meeting room in Emerald Isle Monday, and the lowest came from Great Lakes Dredge and Dock Co. of Illinois at $31,611,770.

“These were both very solid bids,” Mr. Rudolph said in an email after the opening. “The Phase II (project completed this past spring by Great Lakes) winning bid was $28,161,050 for 1,995,000 cubic yards and for Phase III we have much longer sail distances (from the borrow source off Atlantic Beach and the target beach) and the cubic yardage is slightly more at 2,012,850” over about the same distance.

The project is set to begin sometime late this year or early next year for extreme western Emerald Isle, central Emerald Isle and an eastern portion of the town that was nourished in 2019, but is an erosion hot spot. The goal is to vary the template for the hot spot and find a solution.

But the best news Monday, Mr. Rudolph said, is that Great Lakes’ “apparent low bid is very close to what we estimated we will have in the nourishment reserve so our cash flow issues we discussed a few months ago won’t really be an issue at all.”

The beach nourishment reserve fund receives half of the proceeds from the county’s occupancy tax. Earlier this summer, Mr. Rudolph estimated it could total close to $30 million by the time the project starts. The county and the town also have Federal Emergency Management Agency money awarded to fund the cost of replacing sand lost in Florence, which hit in September 2018.

The county estimated the phase three project could cost as much as $45 million and considered dropping eastern Emerald Isle from the bid package and making it a separate bid.

“It was a good call to go with the entire project,” Mr. Rudolph said in the email.

Emerald Isle officials needed to sign the contract with Great Lakes Dredge and Dock, and the town commission adopted resolutions necessary to proceed during its meeting Tuesday night. Mr. Rudolph said Monday the county will issue the notice to proceed in late September or early October.

That does not mean work will start immediately, however. The earliest it can start is Monday, Nov. 16, and it must be complete by Friday, April 30, 2021. That “window” for dredging and deposition of the sand is set largely to protect sea turtles, which generally nest in the summer.

Mr. Rudolph praised the county’s beach engineering firm, Moffatt & Nichol, for its guidance and for putting together options and recommendations for the project earlier this year.

The county had been set to open the bids Aug. 3, but there were only two bids and state law requires three in the first round before any can be opened. The project was readvertised, and there the same two bids Monday.