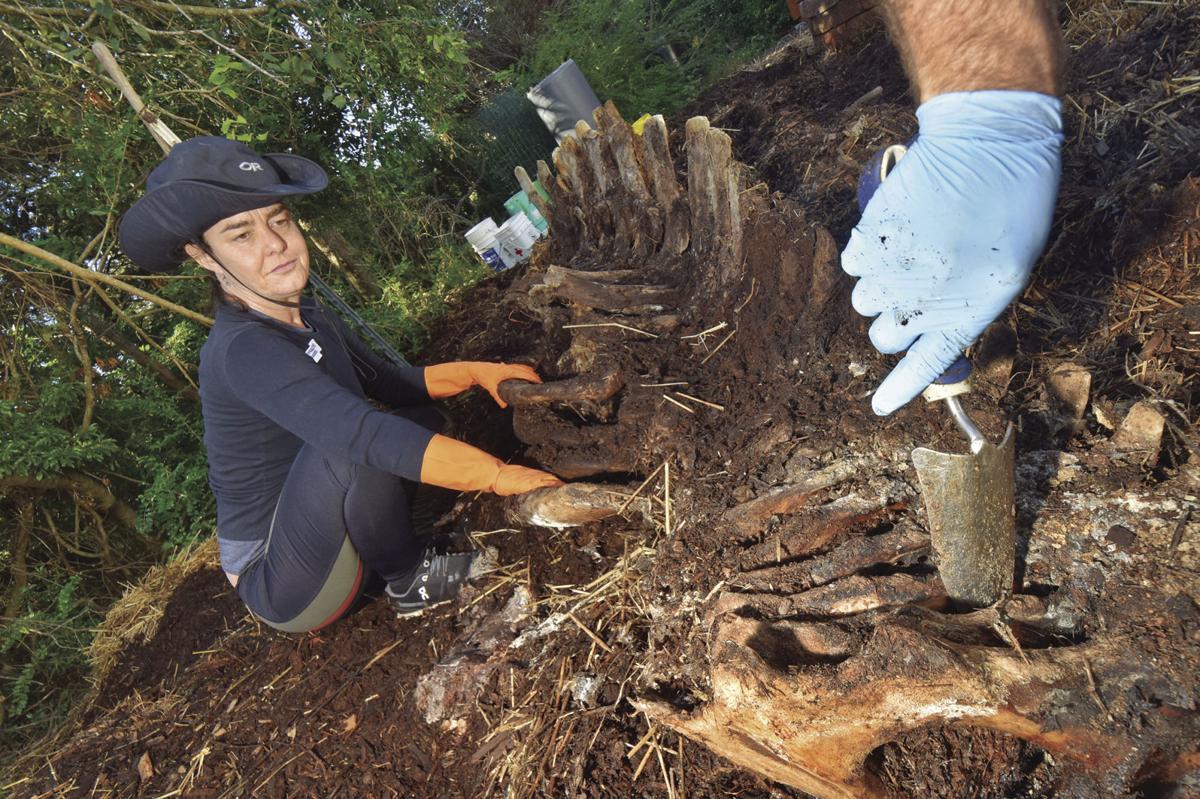 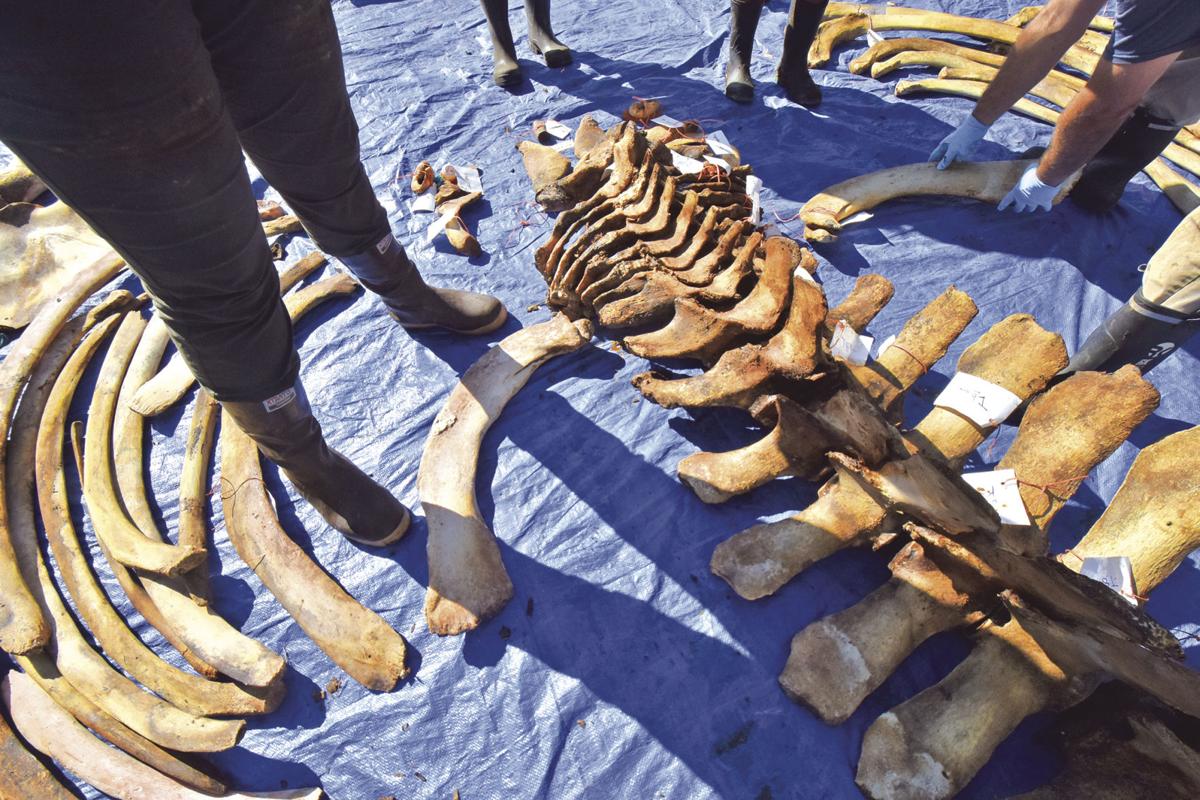 The skeleton of a whale is exhumed, cleaned and documented at Bonehenge Whale Center Wednesday before transport to the Smithsonian. (Dylan Ray photo) 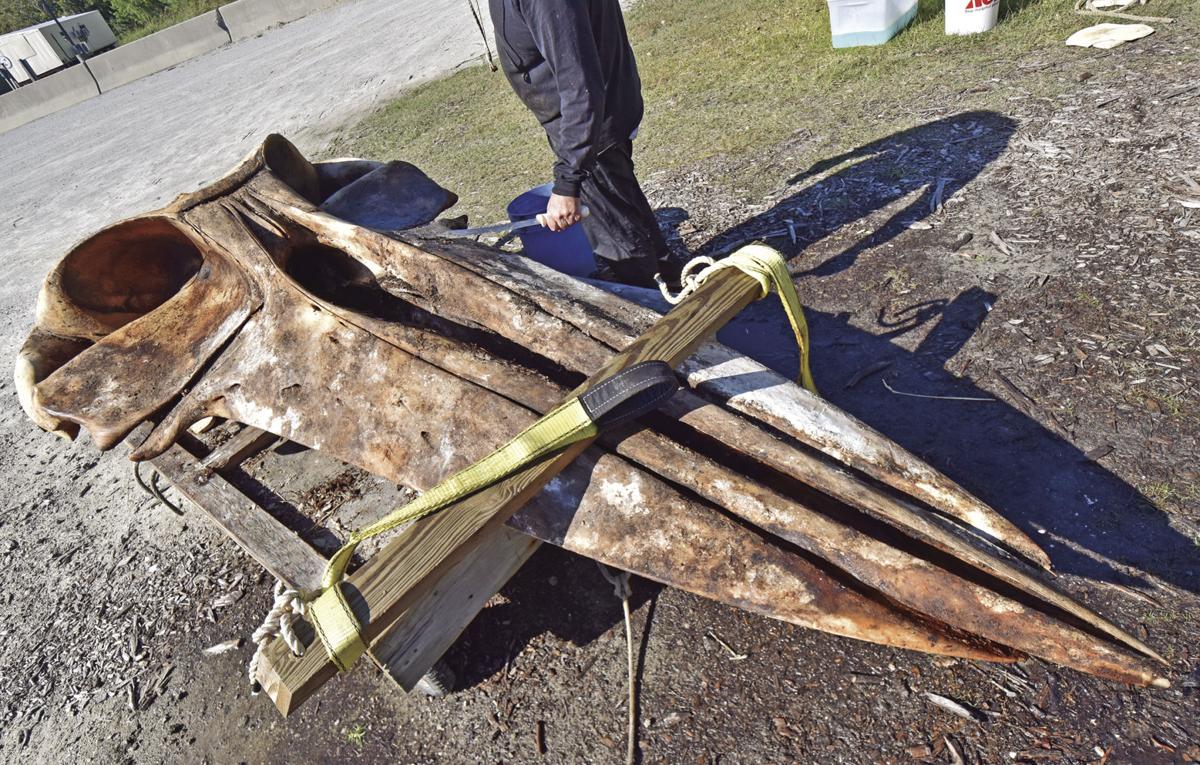 The skull of what is believed to be Bryde’s whale weighs in at more than 450 pounds as it’s secured for transport from the Bonehenge Whale Center in Beaufort to the Smithsonian in Washington, D.C. (Dylan Ray photo) 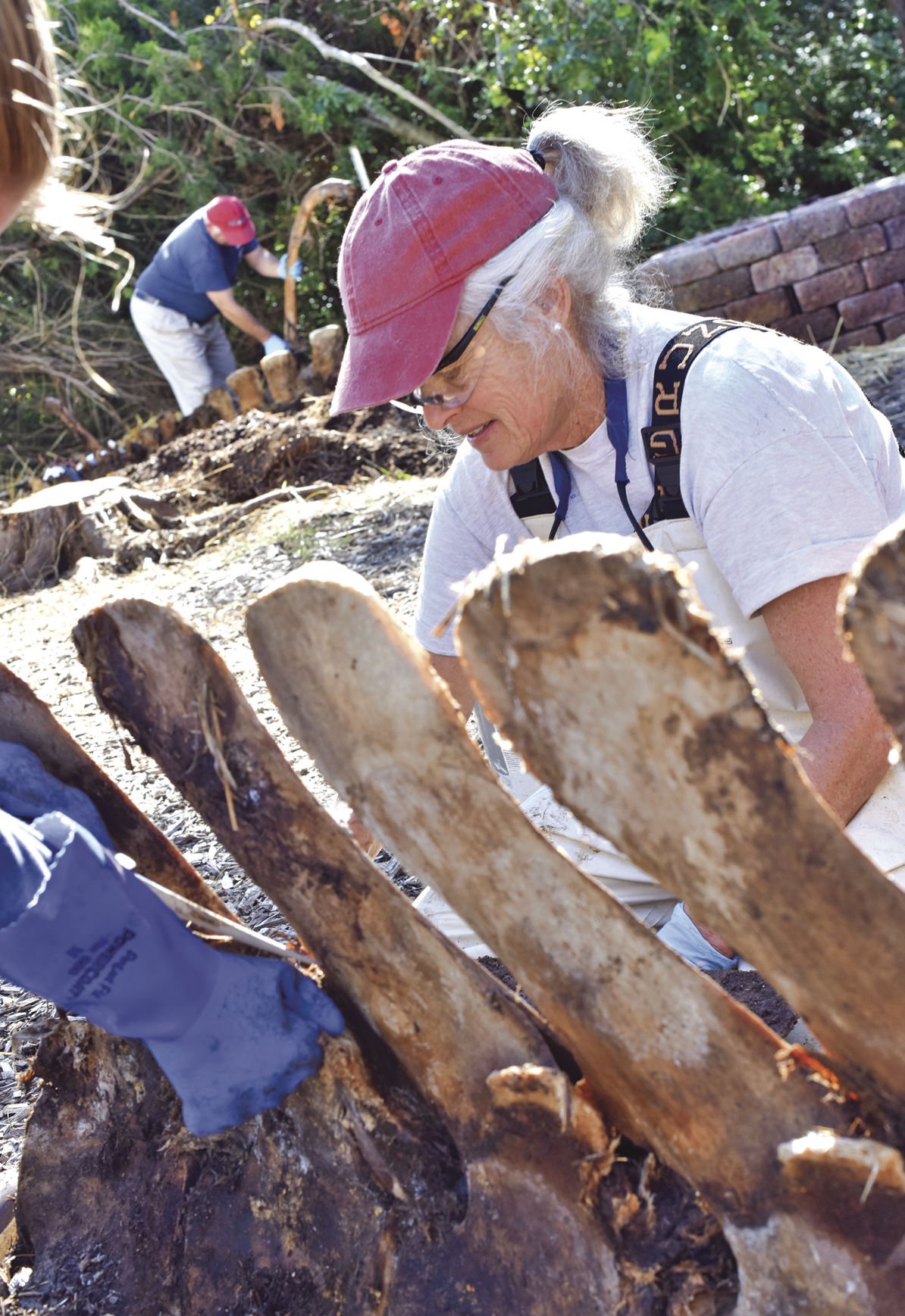 Vicky Thayer, center, clears debris from whale bones headed for the Smithsonian Wednesday during an exhumation on the grounds of Bonehenge Whale Center at the N.C. Maritime Museum’s Gallants Channel Annex in Beaufort. (Dylan Ray photo)

The skeleton of a whale is exhumed, cleaned and documented at Bonehenge Whale Center Wednesday before transport to the Smithsonian. (Dylan Ray photo)

The skull of what is believed to be Bryde’s whale weighs in at more than 450 pounds as it’s secured for transport from the Bonehenge Whale Center in Beaufort to the Smithsonian in Washington, D.C. (Dylan Ray photo)

Vicky Thayer, center, clears debris from whale bones headed for the Smithsonian Wednesday during an exhumation on the grounds of Bonehenge Whale Center at the N.C. Maritime Museum’s Gallants Channel Annex in Beaufort. (Dylan Ray photo)

CORRECTION: This story was updated Oct. 26 to reflect that the amount of debris found in the whale's stomach was an estimation.

BEAUFORT — The Bonehenge Whale Center is playing a major part in a scientific study involving a number of agencies, including the Smithsonian.

Early Wednesday morning, a group of scientists and volunteers came out to Bonehenge for the exhumation of whale remains they believe could belong to an as-of-yet-to-be-discovered subspecies of the Gulf of Mexico Bryde’s whale.

“We brought a whale up here with a lot of volunteer work,” the Smithsonian’s Collection Manager of Marine Mammals Dr. John Ososky said.

Dr. Ososky was one of the volunteers working at the site just outside of Bonehenge Whale Center Wednesday morning.

“It’s a rather rare whale. In April, it was listed as an endangered species. This is going to be the specimen, the holotype that we use to describe the species.”

Holotypes are the official specimens of any given animal.

Dr. Ososky said there is a dearth of information in the scholarship of Bryde’s whale. The bones Bonehenge staff and volunteers exhumed could shed some light on the species.

“Their populations are dwindling,” Dr. Ososky said. “We had to seize the opportunity to get a specimen when we could. In the future, we might not get a chance to get another one.”

The whale carcass originally washed up off of Florida’s coast in January. Officials have worked to preserve the bones, which Bonehenge Director Keith Rittmaster said is an involved process.

“Someone asked us to prepare the bones,” Mr. Rittmaster said. “With no one around to temper my enthusiasm, I said yes. It’s been in a compost pile since May. We added moisture and kept it at the right temperature. Today is exciting because we get to see if our little composting method worked.”

Before the bones can be properly preserved, the flesh has to be stripped without causing damage. To do this, burying the whale carcass is an important first step.

Bonehenge staff received the whale in May and opted to bury it in compost consisting of woodchips, manure and hay. Despite a pungent smell, Mr. Rittmaster and Dr. Ososky said it’s one of the most effective methods of removing the flesh from the whale’s bones.

“The skeleton is the last thing to get done since it takes so long to do,” Dr. Ososky said.

Wednesday, the time had come to assess the remains.

“Hopefully, we are going to get it cleaned up today and get it to the Smithsonian tomorrow,” Dr. Ososky said. “That is the plan.”

Once the work is complete, the final destination is the Smithsonian’s archives, where researchers will be able to study the remains and determine if the whale is a member of the little-known subspecies. Dr. Ososky said there are currently no plans to display the bones.

“That would be counter-productive,” he said. “This is primarily a research specimen. You don’t want to put it on display because you are compromising the ability of researchers to access it.”

Dr. Ososky said most specimens brought into the Smithsonian are for the research collection.

Both Dr. Ososky and Mr. Rittmaster said the research is important due to the high likelihood of the species becoming extinct in the coming decades.

“There are a lot of questions about…how many species there are,” Dr. Ososky said. “Unfortunately, I don’t know how much longer it’s going to be around.”

Mr. Rittmaster said the whale’s cause of death is, at this point, speculation, but Florida officials did find plastic debris in its stomach.

“Marine debris is a problem,” Mr. Rittmaster said. “In whales we do find plastic in stomachs. With this one, veterinarians are cautious about saying (the trash) was the cause of death, but certainly the plastic and the related infection and swelling contributed to it.”

Dr. Ososky spoke about the role organizations like Bonehenge play.

“The Bonehenge Whale Center, this is what they do,” Dr. Ososky said. “If I take it to my facility in the Smithsonian, I would not have had the same spot to do it in. It has a lot of odors (but) it’s not bothering anybody here. It was just an ideal spot, because they have the place to do it.”

A part of the N.C. Maritime Museum, Bonehenge Whale Center is a workspace for preserving and researching marine life. Environmental issues are another important aspect of the work staff and volunteers are doing there.

Mr. Rittmaster will continue that work as the center prepares to formally open its doors to the public sometime in 2020.