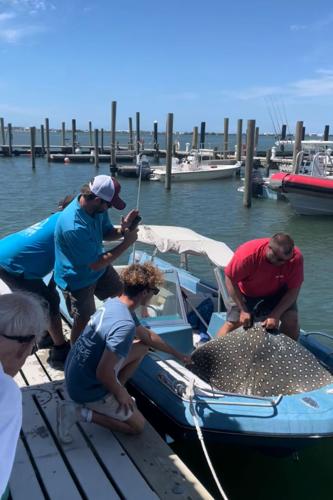 Luis Herron prepares to heave a 200-pound spotted eagle stingray back into the water on Friday at Dockside Yacht Club and Marina in Morehead City. 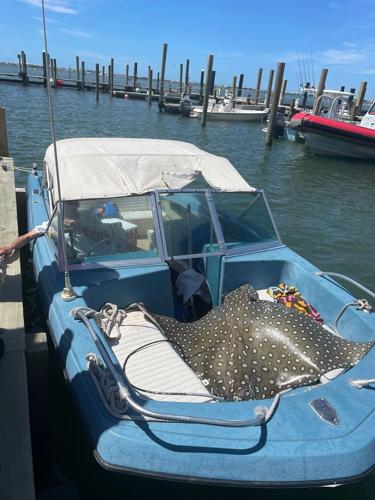 A spotted eagle stingray waits in a boat after jumping and injuring a passenger.

Luis Herron prepares to heave a 200-pound spotted eagle stingray back into the water on Friday at Dockside Yacht Club and Marina in Morehead City.

A spotted eagle stingray waits in a boat after jumping and injuring a passenger.

MOREHEAD CITY - A 26-year-old boater suffered a concussion Friday, Aug. 5 after a large spotted eagle stingray launched itself from the water and collided with her in the Morehead City Channel.

The passenger's mother, Genevive Francis, was driving the vessel with her family on board when the incident happened.

Francis explained the water was "very calm" as they were heading between Radio Island and the Coast Guard Station at Fort Macon.

"All of a sudden I saw an object flying over the bow," Francis said. "It looked like a big, white orb. I screamed, `move, watch out,' and it happened so fast."

Francis' daughter, Sara, was sitting unaware on the port side of the bow reading a book when she was hit by the ray, Francis said.

Sara was able to slip from under the ray to the safety of the stern before being crushed or stung.

Francis said the ray was bloody and flailing around, causing her to believe it was being chased by a shark or some other predator.

Robert Exum, 87, of Morehead City was also on the boat when the incident happened.

Exum explained he has been in the area since 1936 and never encountered anything like this before.

"We were going to Beaufort or Shackleford Island, but this changed our plans," he said.

The family quickly turned the vessel around and returned to the nearest port they could find, the Portside Marina.

"Everyone came out to see what was happening," Exum said.

Employees from Tow Boat USA and the marina, Luis Herron, Payne Thomas, Tony Martinez and Kent Moser assisted with tying up the boat and tossing the giant ray back overboard.

It was estimated the ray weighed approximately 200 pounds and was observed leaping again from the water after release.

"I hope I never run into one again," Exum said.

Sara Francis sought a medical assessment following the incident and was found to have bruising to her body and a concussion from the impact, according to the family.

Spotted eagle rays typically inhabit tropical regions of the Atlantic, Pacific and Indian oceans, though it is extremely rare to have one injure someone, according to wildlife experts.

The rays have a flat body with white spots on top and a white underbelly. They are known for their distinctive flat snouts, similar to a duck's bill.

The largest of the species can reach 16 feet long and weigh 500 pounds. They also have longer tails than other rays and have numerous venomous spines behind their pelvic fins.

While the rays typically avoid humans, their daily movements are influenced by the tides, and they have commonly been observed jumping out of the water.

Spotted eagle rays are considered near threatened on the International Union for Conservation of Nature Red List.