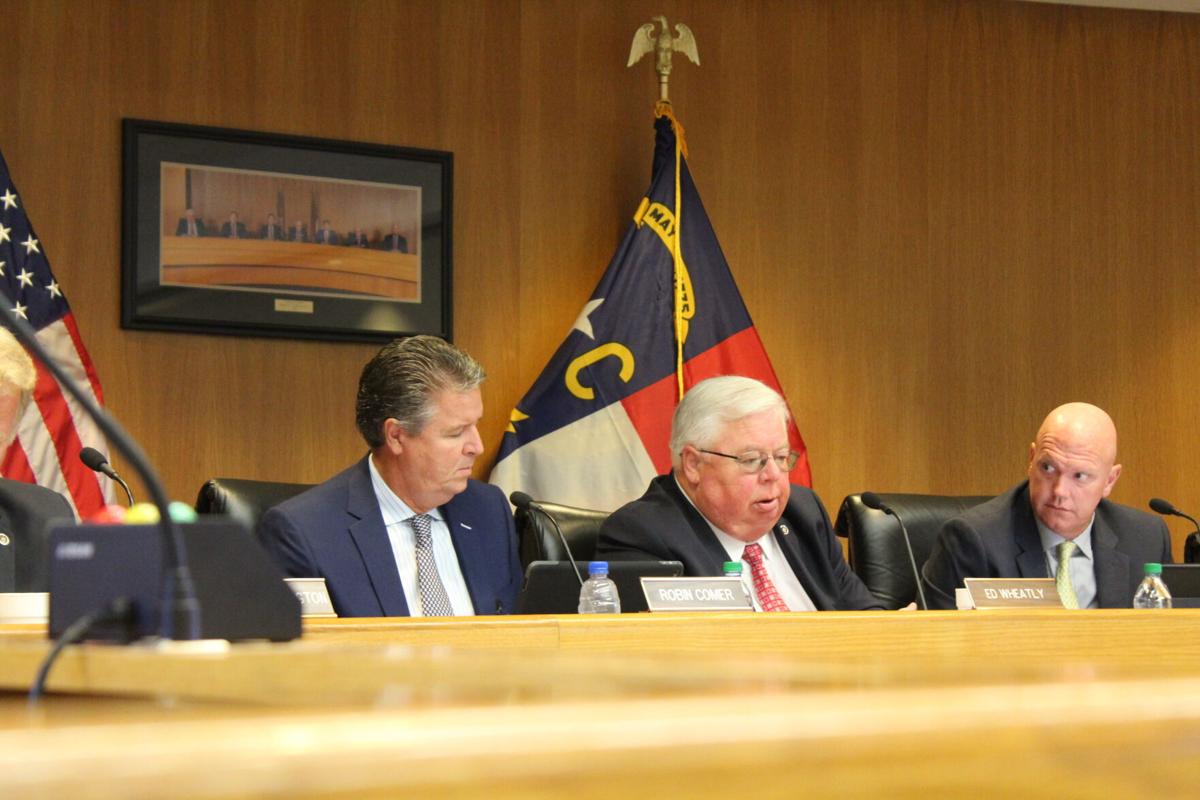 Carteret County Board of Commissioners Chairperson Ed Wheatly, center, discusses the pros and cons of the county selling its water system, which serves approximately 1,200 customers, many of whom reside in his district, during Monday’s board meeting at the county administration complex in Beaufort. Looking on are Commissioner Robin Comer, left, and Commissioner Mark Mansfield, right. (Jackie Starkey photo) 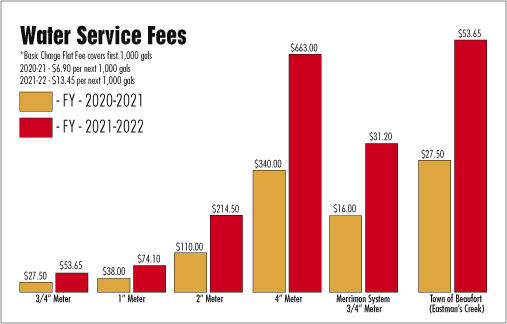 This graph, compiled with information provided by Carteret County staff, shows the fiscal 2020-21 water rates, compared with the new rates for fiscal 2021-22 approved Monday by the County Board of Commissioners. (Richard Clark graphic)

BEAUFORT — A decision on the future of the Carteret County-owned water system will be delayed another month after county commissioners tabled a verdict on the sale Monday, but in the meantime, rates will increase by 95%.

The move to delay the decision followed about 20 minutes of public comment, during which a number of water system users and others appealed to the board to retain the system, rather than sell to Carolina Water Service of North Carolina for $9.5 million.

“The stakes are very high,” Deerfield Shores resident Katie Latanich said. “The decisions that are made now about our infrastructure have consequences in the future, and I don’t want this community to be the test case for study of privatizing our water system.”

Several commissioners, however, said they struggled to see the benefits of retaining the public utility, which is on the “pending list” to be considered a financially distressed system as it is not self-sustaining, according to county manager Tommy Burns.

Commissioner Robin Comer said the decision to sell is a “no-brainer” to him.

“We aren’t really in the water business, we’ve just got a little pod over here that’s got water set up,” he said. “And one of the [complaints] with the water system I’ve seen … is that we’re in this situation because it’s been mismanaged. That’s absolutely not so. We’re in this situation because this water system wasn’t set up to win to start with.”

‘It’s a decision that needs to be made’

The matter has been before the board several times in recent months, beginning with an initial bid of $7 million in February from Aqua N.C. Pursuing the potential sale led to a bidding war between that company and Carolina Water, resulting in a final upset bid in early May of $9.5 million from the latter.

Mr. Burns, in introducing the sale Monday at the board’s regular meeting in the administration building in Beaufort, said the choice was now up to commissioners.

“It’s a decision that needs to be made in the interest of the county moving forward, whether it be with a private water system or public-owned water system,” he told the board.

The night’s public speakers, which included a number of individuals from the grassroots group Carteret County for Public Water, or CC4PW, told commission the users were ready for a fee increase if it meant retaining the public system and attempting to make it financially viable.

“We’re literally pulling our wallets out and saying, ‘we want to give you more money,’” CC4PW organizer Patrick Kelly said.

The system, which is 21 years old, serves around 1,200 customers, mostly along the Highway 101 corridor. It operates on revenues from user fees, a special tax district that encompasses reportedly 2,600 property owners not using it and general county money. Over its life, the water system has lost more than $5.57 million, county officials said Monday. Among other factors, because the system is not self-sustaining – “subsidized” by the county at large, as Chairperson Ed Wheatly put it – it is considered distressed.

The latest contract from Carolina Water, which is still being negotiated, proposes leaving the rates unchanged for the first five years and would also result in the elimination of the special tax. These were two of the reasons highlighted by multiple commissioners Monday for selling the system. Commissioners also alleged the private company could update the system without passing costs along to the customers.

The county declined to release the preliminary contract discussed Monday.

“Attorney (Rob) Wheatly will release it once its finalized. Its still be [sic] negotiated amongst the attorneys,” Mr. Burns said in a Tuesday email to the News-Times.

Mr. Comer indicated worries over water quality under the company, if sold, were unfounded.

“It’s the same water coming out of the same system, same lines, nothing changes, so I’m having a hard time … with this,” he said. He also said he had received feedback from water customers unwilling to pay or concerned about higher rates.

The board unanimously voted to delay the decision at the request of Commissioner Mark Mansfield, who asked to wait out a final contract, which county attorney Rob Wheatly, brother of Chairperson Wheatly, said is a few days out.

Following the decision to delay, the group of water sale opponents, many of whom wore blue to show support for the public utility, said they would be back next month to “pack out this building” in opposition to the sale. Several attendees expressed concern the board had already made up its mind.

“I feel like there are several commissioners on this board looking at $9.5 million for the county, which is not a lot in the grand scheme of things,” Mr. Kelly, the organizer, told the News-Times of the sale. Instead, he insisted the best path forward is a locally managed system that serves the users and county residents, rather than a corporation beholden to turning a profit for shareholders.

‘See how many people balk’

Later in the meeting, during budget deliberations, the board unanimously eliminated the special tax of 5.5 cents in the select district which generates revenues of around $500,000 to $600,000 to support the water system. The board cited the need to address the tax rate ahead of any potential changes, as it must legally set tax rates once, before Thursday, July 1, the start of the new fiscal year.

“After discussion tonight, I’m not sure what will happen with the water system, but in order to not be a distressed water system, I think we need to do away with the special taxing district and do away with 5.5-cent (tax),” Mr. Mansfield said in making the motion to eliminate both.

To makeup for the lost revenue from dropping the tax, the board separately and unanimously voted to increase rates by 95%. On the advice of county attorney Mr. Wheatly, the board increased rates by 90% to balance the budget, as required by law, and an additional 5% to accrue revenue for repairs and updates on the system, should the county not sell.

“Why don’t we set that tonight to be a realistic rate, see how many people balk over that over the next month or so?” Commissioner Chris Chadwick said. “We might have more people wanting to sell it.”

The new rate would increase the average water bill from $48 per month to around $90, officials said. A full breakdown of the new rate structure, by meter size, as well as the 2020-21 rates, can be found at the county’s website at carteretcountync.gov/511/Water-Utilities-Division.

The moves to eliminate the tax and increase the rate came late in the meeting, after many attendees who spoke on the water system sale had left the building.

“I do think it looks like a huge rate increase. Are people going to be hurt by it? Absolutely,” he noted. He said the elimination of the special tax, however, should offset some of the rate increase, and his group will work to educate water system users in the meantime.

Unlike the special tax, which can be set only once annually, the board can adjust the water rate in the coming months if it sees fit, staff confirmed.  Additionally, if the board moves on the sale, the rate will remain in place during the due diligence period, which could last a year, according to Mr. Burns.

The fate of the sale is now set to be decided in a month’s time, at the commission’s Monday, July 19 meeting.

“I wanted everybody to understand … about the moratorium on the increase and the water prices (in the current contract). That’s a game changer,” Chairperson Wheatly said in his closing comments. “… I’m not one for kicking the can down the road either, but I think we did the right thing tonight in putting it on hold and letting this information get out and soak in, and then reopening this conversation and taking it to where I think we should go.”

Reporter's note: This article was last updated at 1:11 p.m. Tuesday, June 22, 2021, with the latest information and to include a graph showing the water rates.

Oh , the old bait and switch game to get folks to pay more . Shame !

Hmmm kill the special tax district and double the bills of the customers. Seems like an artillery barrage directed at the customers wallets, that should soften up the opposition and make the sale more attractive. Sure glad I have a private well not subject to the whims of elected officials. Do remember to vote for the "5 families" and the next and every subsequent election.

95% bump in rates would increase the sales value from $9.5m to $20,000,000. Three time earning plus assets minus depreciation. WOWEE BATMAN. CASH HERD RATHER THAN CASH COW. LET'S SEE ALL THE E-MAILS

Exactly and for a system, from the way they act, is on it's last leg, and cost more to operate than it brings in. Like I said on the other article about this, I'd love to see the books. They are collecting(based on the numbers here) $691,200 per year JUST from the 1200 users alone. That is at the current $48.00 average they quoted. It doesn't include the 2600 residents who don't use the system but pay a special tax. Where does all the money go or does it really cost that much, and more, to provide water to 1200 residents.

I have a private well and I pay a "water district" fee of 0.0550 per $100 of my property value. I don't know why. I have received several different answers as to why the only one that made any sense was "if your house catches on fire the fire department would have to hook up to the hydrants, and you'd be using water" Either way, 95% increase in bills is opening the door for more companies to come in and make bigger offers to purchase the water system.

in 1952 my folks were part of a new sewer district, they paid sewer tax for 60 years, a sewer line was never run down our rd. Once a tax or tax like structure is enacted it will never go away.

Flint Michigan 2.0 Any lead solder in the plumbing. If so then look out. A lawsuit feeding frenzy is about to happen.

These crooks need to be removed from power. They don't deserve to sleep at night or go out in public without confrontation.

Time insist this crooked operation be exposed. Water is serious business. Bad water can kill innocent people. The new owners are assuming a tax advantage and write-off that will return their investment - that is all. Peoples interest can be ignored. Who are the buyers?????? We need names. not corp cover.