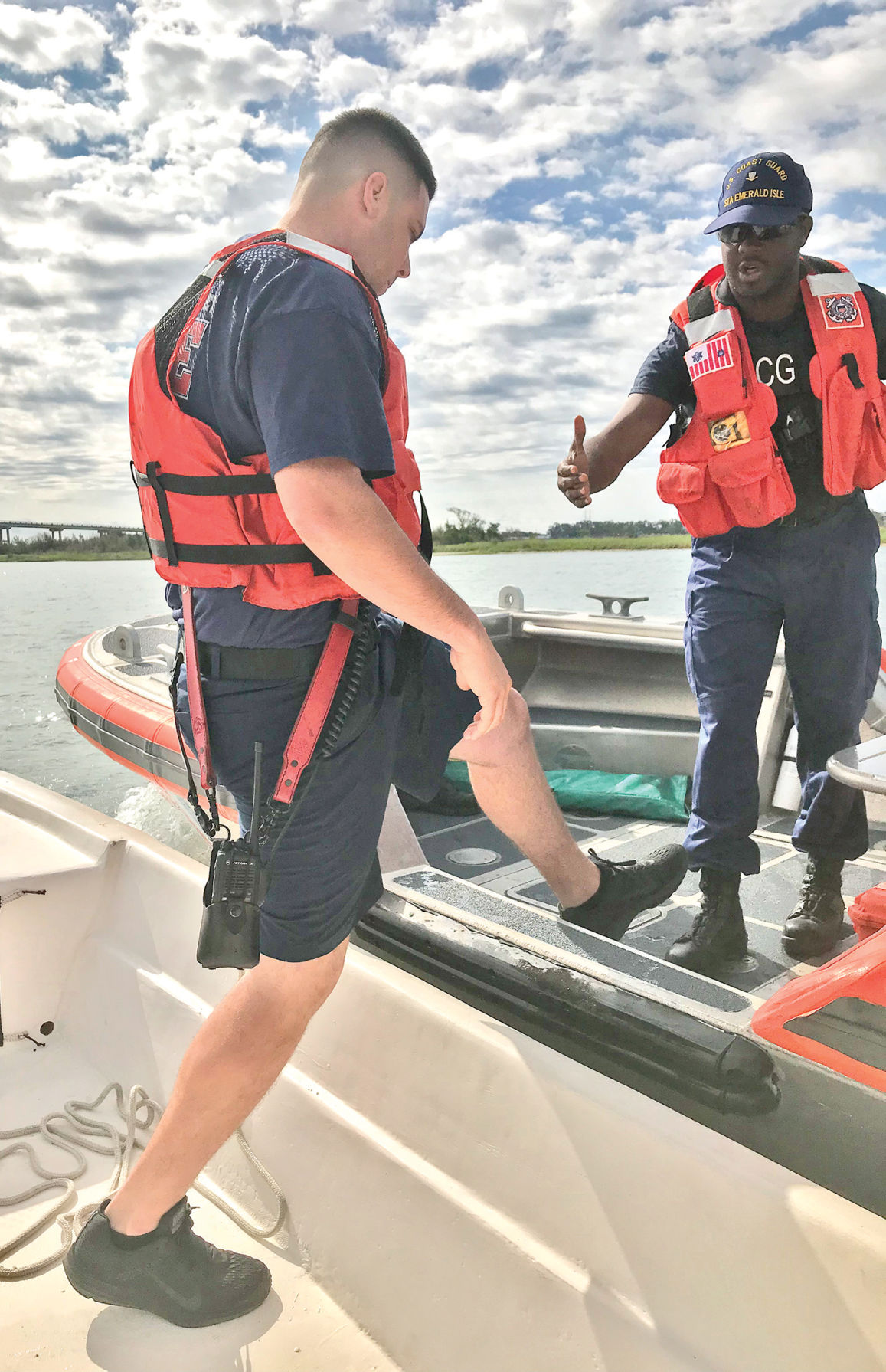 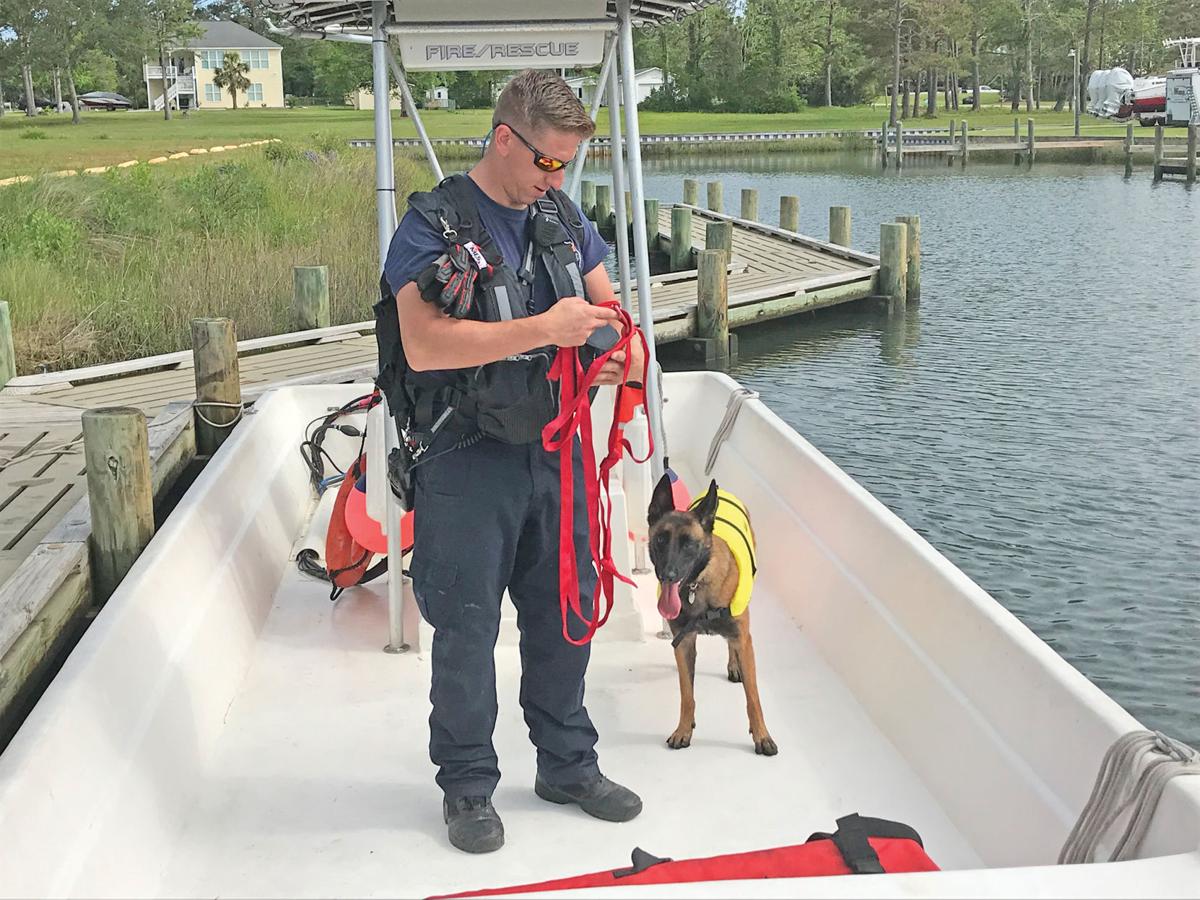 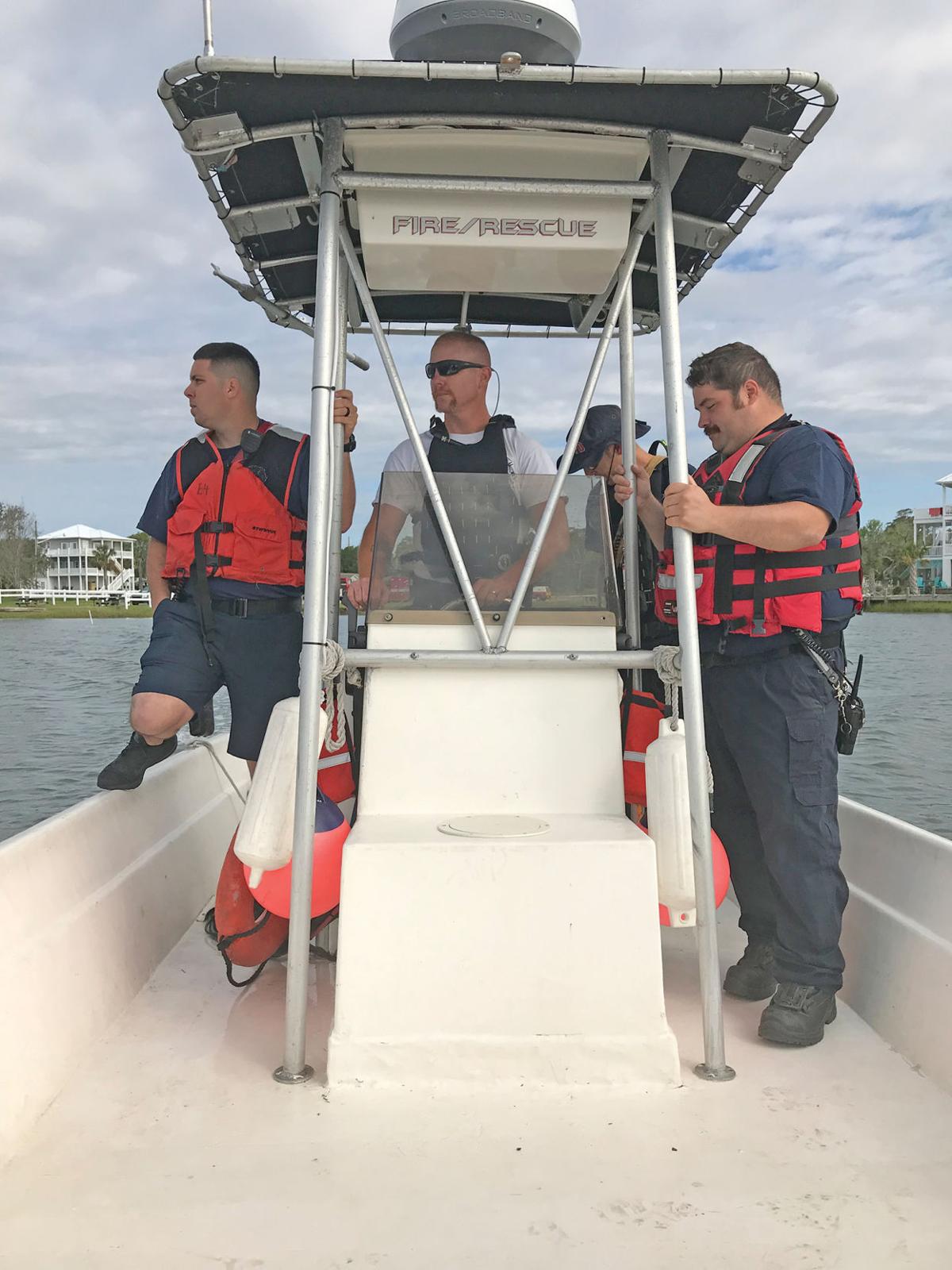 Matthew Bass, a firefighter and paramedic in the department, climbed aboard the Coast Guard boat, then returned to the department’s boat.

It was just training, and it was easy on a morning when Bogue Sound was slick and glassy and there was virtually no wind.

But it was nonetheless important, part of annual training designed to make all department personnel, as well as the Coast Guard personnel from the Emerald Isle station, comfortable working with each other and moving back and forth between boats at sea.

“We do it every year, several times,” said WCFD Assistant Chief Mike Penuel, who was also aboard for the training. “It’s important. We probably get 10 to 12 of these calls a season, and we need to be ready.”

It isn’t always easy. Sometimes, like during the same training Monday morning, the seas are rough and the wind is blowing hard.

“It would have loosened your teeth yesterday,” Assistant Chief Penuel said. “And it’s often those kinds of conditions when rescues are needed. It’s good to get training in different conditions. ”

Sometimes it’s dark, and sometimes it’s not simply a matter of a paramedic clamoring aboard the USCG boat; sometimes a patient picked up by the Coast Guard has to be transferred to the WCFD vessel.

The WCFD boat left from the Cape Carteret town dock at the end of Manatee Street, and the training was designed to simulate what might happen in the event of an injury, such as a person diving off a boat in the sound and hitting a sand bar. It’s not at all uncommon for that to happen, Assistant Chief Penuel said.

In some cases, the patient will remain on the Coast Guard vessel – either the 27-footer or the larger, ocean-going 45-footer – because it’s faster and the 45-footer can get to the major docks in the area, such as Dudley’s Marina in Cedar Point, Caspar’s Marina in Swansboro and the N.C. Wildlife Resources Commission facility in Cedar Point.

In a serious case, according to USCG Petty Officer Hilton O’Neal, it’s almost a certainty the WCFD paramedic will need to get aboard the Coast Guard vessel.

“We all have basic first aid training, but in many cases we’re going to need a more competent paramedic to get aboard and start treatment right away,” he said. “It’s important for all (of) us to do this training so (we) get confident working together.”

In almost all cases, the WCFD vessel needs to be the one to approach, not the Coast Guard boats, which weigh far more and displace more water.

“If we try to approach you,” Mr. O’Neal said to the WCFD and EMS personnel, “we’ll push you off, just because of the weight. And this is the smallest (boat) we have in our unit.”

To do that approach, whoever’s manning the helm in the flat-bottomed WCFD vessel needs to pull beside the Coast Guard boat, match its speed and then gently slide into it and stabilize so personnel and patients can easily transfer from one to the other.

It has to be smooth and quick, because time is always of the essence, Asst. Chief Penuel said.

He said the department likes to use the Manatee Street dock when possible, because it’s close to the WCFD headquarters on Sherwood Avenue in Cedar Point.

It’s not as close as the N.C. Wildlife facility in Cedar Point, but it’s not as busy. That makes for faster deployment and faster transfer of patients to WCFD ambulances for transport to medical facilities.

In some cases, Assistant Chief Penuel said, there can be multiple injuries. In those cases, a WCFD paramedic can stay on the Coast Guard vessel while another paramedic rides to shore in the WCFD vessel with a patient.

The WCFD boat can comfortably carry four people and can travel 20 to 30 mph, depending on wind and water conditions. It can, if necessary, get out into and back from often-treacherous Bogue Inlet, if sea conditions aren’t too bad.

The boat is available not only for WCFD, but also for the Broad and Gales Creek Volunteer Department and the Swansboro Fire and Rescue Department.

WCFD Capt. Dustin Pelkey said the boat is more than adequate, especially considering what it was – a basic net boat – before it was donated to the department in the early 2000s.

It’s got radar, which is essential at night or during low-light and stormy conditions, and department personnel practiced using it during the daylight training Tuesday.

It’s also got a T-top and a center console and side-scan sonar, which is key to searching the bottom for a drowning victim, and the sonar maps the bottom on a screen so personnel won’t waste time searching the same path twice.

Department personnel made all the modifications to the boat to make it the great tool it now is, Capt. Pelkey said. The installation of the modifications also saved the department money, which is crucial in a time of tight budgets.

When Assistant Chief Penuel said all department personnel receive the training, he wasn’t kidding. Even Nala, the department’s canine, took a trip out Tuesday, wearing a safety vest like all the other personnel.

Nala, who is about 3 years old, has been trained by her owner and handler, department volunteer Josh Young, since she was 9 weeks old.

She’s a search dog, and recently aided the Carteret County Sheriff’s Office in finding a person in a case Mr. Young said he couldn’t discuss.

For water duty, he said, Nala would be most useful in searching for someone on the numerous islands in the sound or the area’s rivers and creeks.

“If we find a beach towel or something like that, she can track someone by that,” he said.