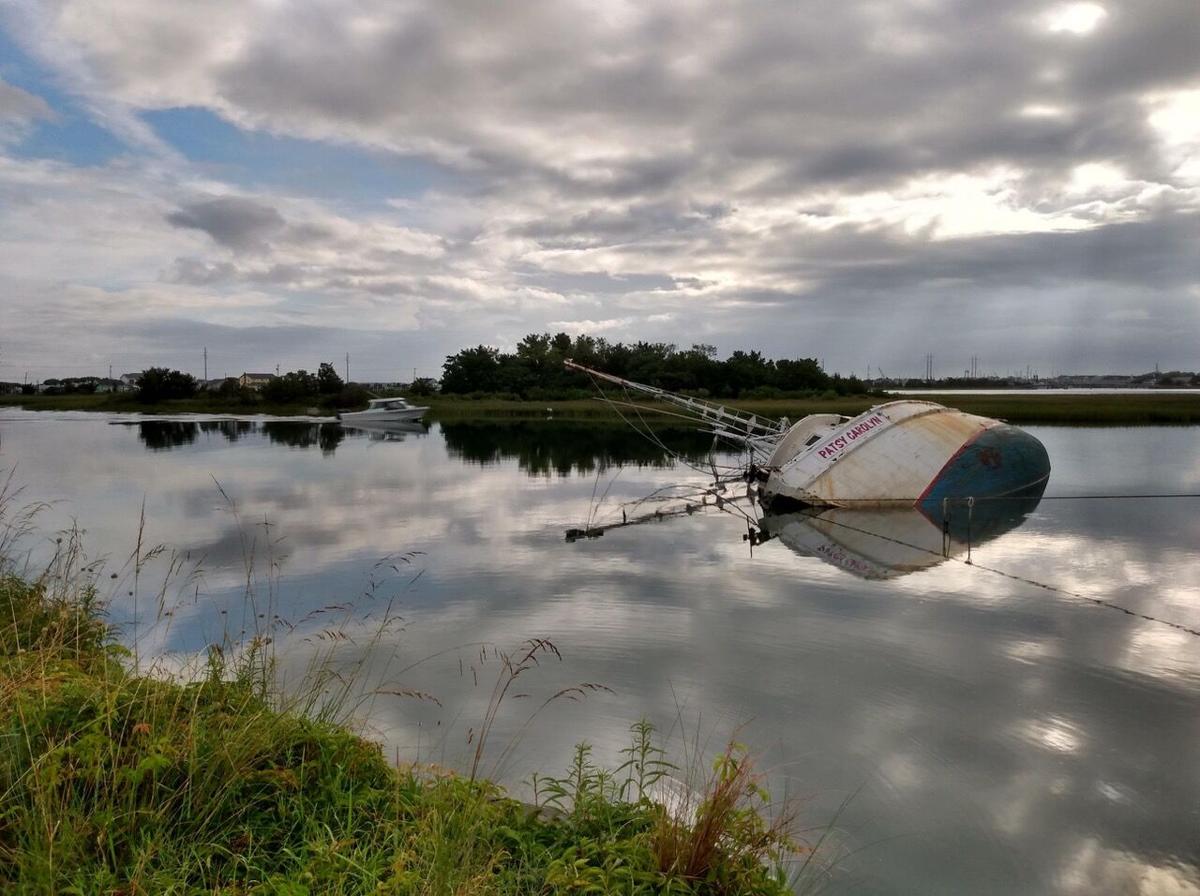 A derelict vessel lays on its side in the waters near Pivers Island recently. (Contributed photo) 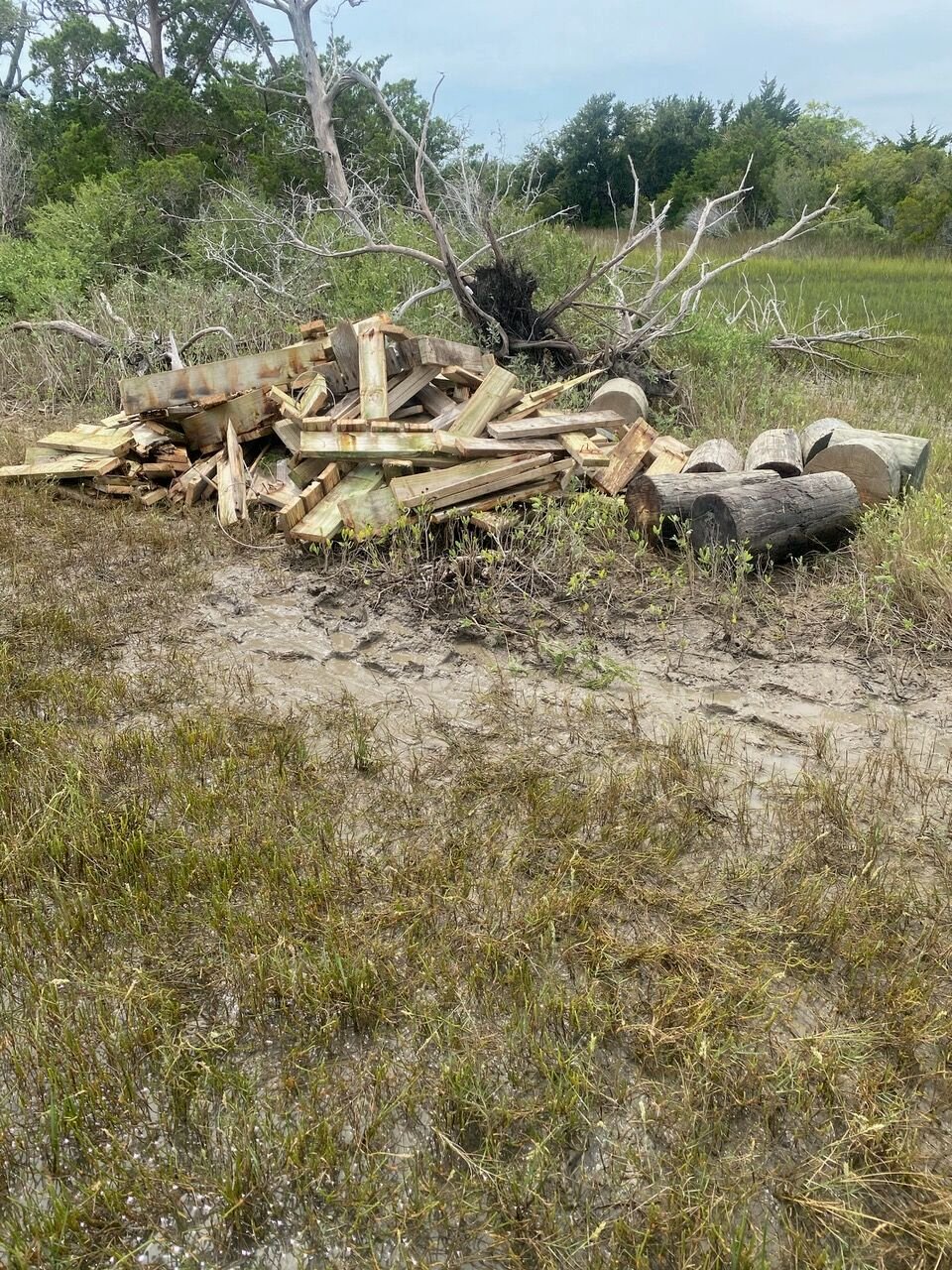 According to an announcement Oct. 22 from the N.C. Coastal Federation, a nonprofit dedicated to conserving and restoring the state’s coastal environment, the N.C. Division of Coastal Management, in partnership with the NCCF, received nearly $2 million dollars in funding from the Natural Resources Conservation Service’s Emergency Watershed Protection Program for the removal of marine debris and abandoned and derelict vessels.

DCM’s Coastal Reserve-and National Estuarine Research Reserve program is one of the many public trust areas along the coast that will benefit from the cleanup effort.

According to the NCCF in its announcement, local fishermen have been combing through public trust shorelines and into hidden marsh areas of dredge spoil islands to remove large deposits of pressure treated wood, plastic and polystyrene floats and other debris from docks and waterfront structures damaged by Hurricane Florence. Coastal restoration specialist Sarah Bodin is the federation’s lead on the cleanup project and said three marine debris cleanup crews have been working in the central region in Carteret and Onslow counties since July.

Field crews have collected almost 74 tons of debris since July from the reserve, as well as the Permuda Island and Masonboro Island reserves and Hammocks Beach State Park.

“During this busy hurricane season, everyone can help reduce property damage and the amount of debris entering coastal waters by following tips such as ensuring trash and recycling cans are empty and secure prior to storms,” Mr. Wilgis said.

Most of the debris being collected are large pieces of debris, like lumber and floats from broken up docks and piers.

Sneads Ferry fisherman Joe Huie said residents and property owners “should really pay attention to how these things are being built and maintained along the coast.”

“It would probably be cheaper for the property owner and the public to build these more solid than to replace them with every storm,” he said.

Mr. Wilgis said the federation “encourage(s) owners of these damaged structures to try to secure them as best as possible until they can be removed or repaired.”

Many vessels have also been scattered along the coast are now considered abandoned and derelict. In July, Gov. Roy Cooper approved final legislation that allowed the N.C. Wildlife Resources Commission to remove the derelict vessels.

Vessel removal by specialized contractors is anticipated to begin in late November. The state-hired contractors will focus on the derelicts from named storms. The WRC will use an additional $1 million in state appropriations to remove vessels left by hurricanes Florence and Matthew.

People visiting coastal reserves and other public lands can help by picking up trash when it’s safe to do so and disposing of it properly. Visitors are encouraged to share their finds by tagging “@debrisfreenc” on social media.

More information on this project and the N.C. Marine Debris Action Plan can be found online at nccoast.org/protect-the-coast/marine-debris/.

While this is nice and much needed , to be sure . What about the owners of those derelict vessels ? Don’t tell me that they can not be found , they can . Most every vessel has a ID number or federal documentation number somewhere . That can be back tracked to the last known owner . At that point , take them to task to clean up their mess . A good hit to the wallet is a strong motivator . The same goes for damaged piers and docks . Fix it or get it out of the water . Certainly we have enough government employees available to do this .

So, where are they taking the homeless?

From what I observed this morning , some are sleeping in a grey Jeep wagon by the New Swansboro Rec Center parking lot . Been there for a couple of days now .