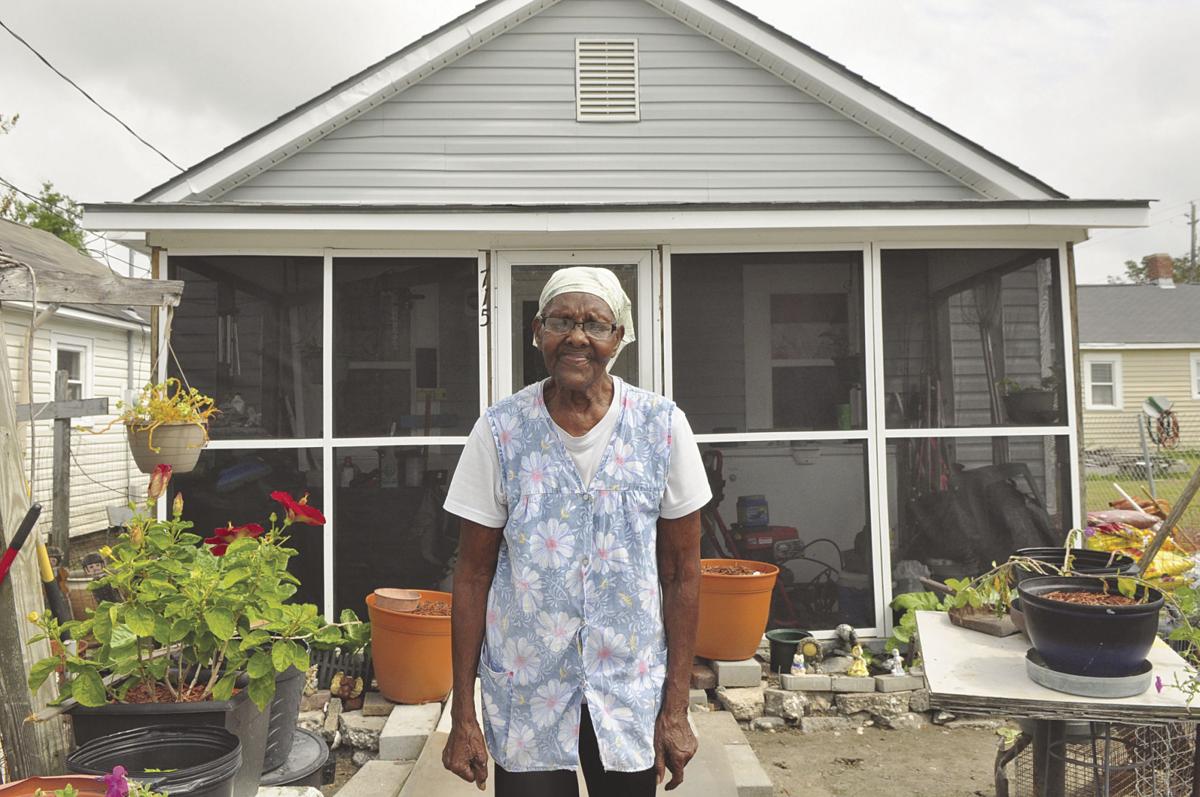 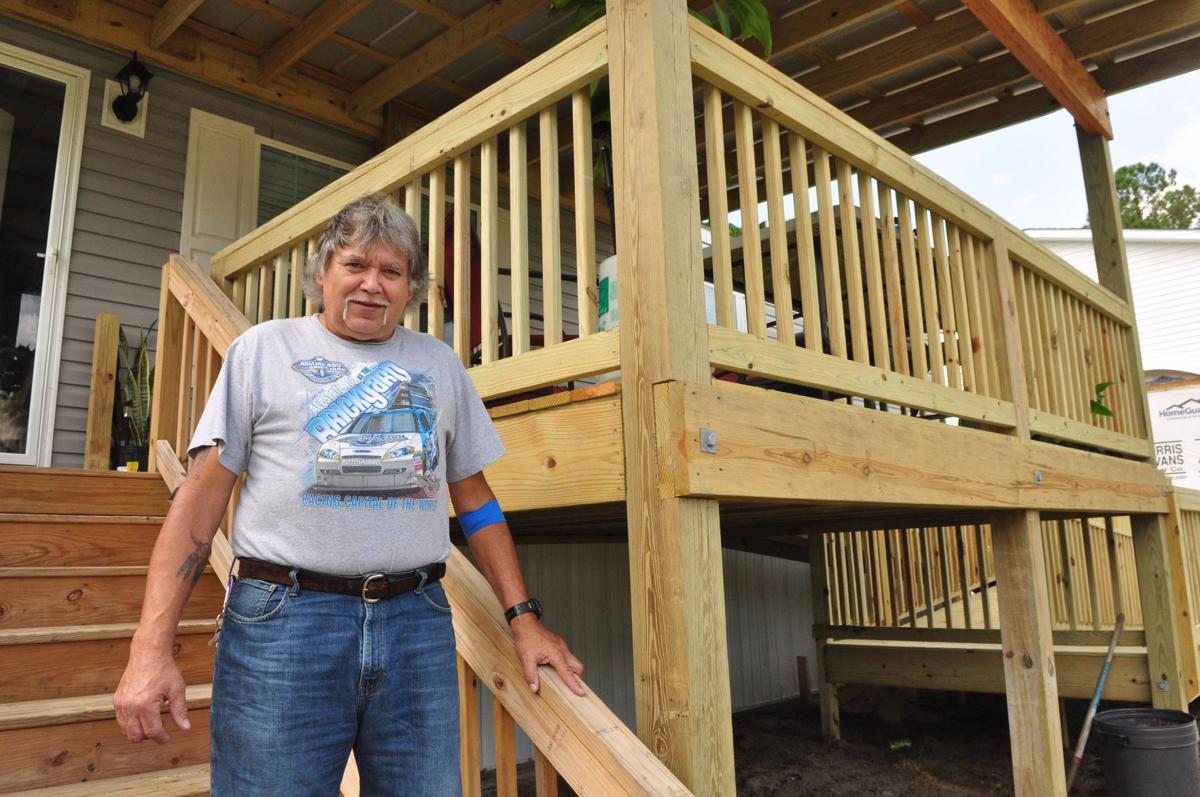 Paul “Chico” Pitner of Newport stands Friday in front of his new elevated mobile home that he recently moved into after losing his home last year during Hurricane Florence. (Cheryl Burke photo) 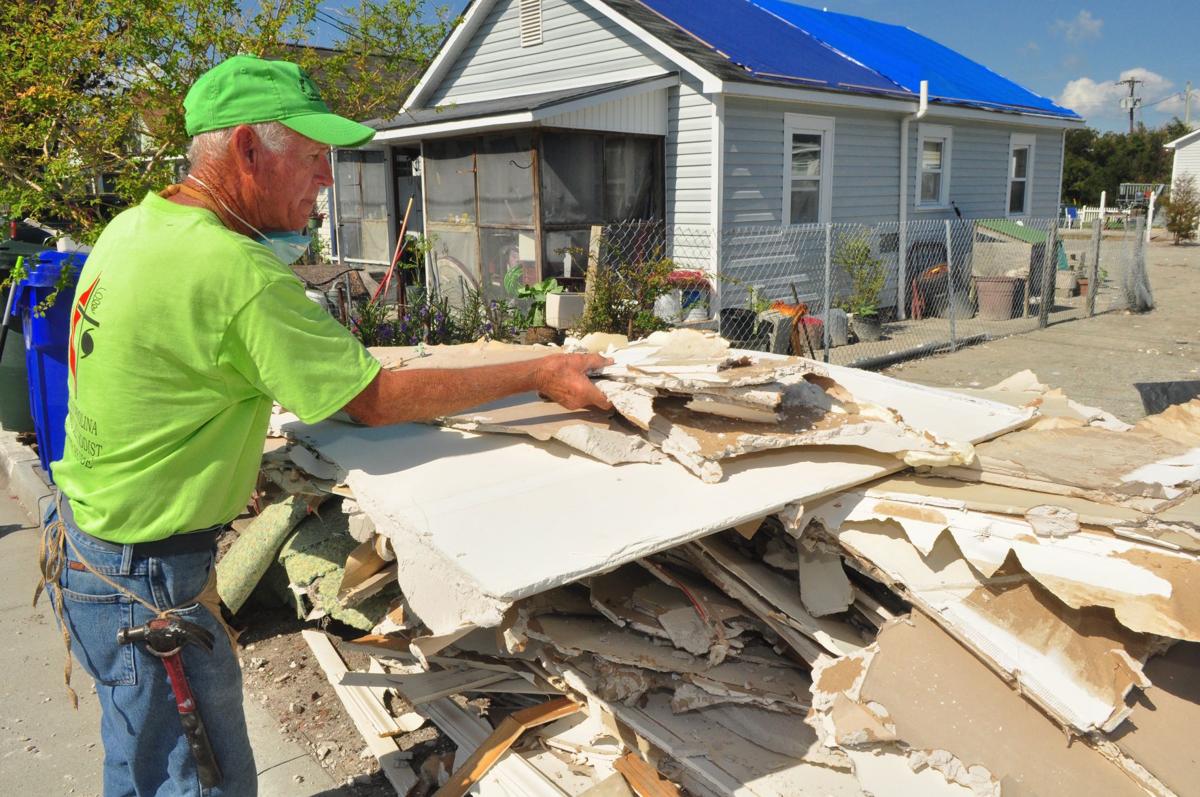 United Methodist Committee on Relief volunteer Mitch Rabon stacks drywall last year as it is removed from the house of Ruthie Mae Pinckney of Beaufort, which was damaged by Hurricane Florence.  (Cheryl Burke photo)

Paul “Chico” Pitner of Newport stands Friday in front of his new elevated mobile home that he recently moved into after losing his home last year during Hurricane Florence. (Cheryl Burke photo)

United Methodist Committee on Relief volunteer Mitch Rabon stacks drywall last year as it is removed from the house of Ruthie Mae Pinckney of Beaufort, which was damaged by Hurricane Florence.  (Cheryl Burke photo)

This story is part of an ongoing anniversary series on Hurricane Florence, which struck in September 2018, and the storm’s lingering effects on Carteret County and its residents.

NEWPORT — It’s been one year since Paul “Chico” Pitner and his two dogs were rescued by a U.S. National Guard boat from his home on Hill Top Road, which flooded with more than 10 feet of water during Hurricane Florence.

Like many in Carteret County, he’s still recovering from the devastating affects of the Category 1 hurricane that caused widespread flooding and wind damage Sept. 13-14, 2018.

The Newport River overflowed its banks, causing multiple families in Newport to be collected from their homes by swift water rescue teams. Many in Mr. Pitner’s neighborhood were rescued off their rooftops.

“Many of my neighbors still aren’t back in their homes,” Mr. Pitner said Friday as he stood on the steps of his new mobile home, which he has raised 7 feet higher than his previous, now demolished, unit.

“We moved into our new home seven weeks ago,” he said.

Mr. Pitner and his dogs stayed 13 days in the county emergency shelter at Newport Middle School following Florence until he was able to purchase a camper that he moved into his backyard to live in while he began the rebuilding process. He also found his lost cat, which he couldn’t get out of the house the night he and his dogs were rescued.

“The cat was in the house for several days until we found him. I was so worried,” he said, adding that the cat survived and now spends its days napping in the new mobile home.

As for the camper he lived in while going through the rebuilding process, “We just sold the camper back to the lady we bought it from.”

He said he’s keeping a close eye on the weather reports these days as tropical systems float in the Atlantic Ocean. He added that he stayed in his new mobile home during Hurricane Dorian, the Category 1 storm that caused flooding Sept. 4-5 in the eastern part of the county and on Ocracoke Island and Hatteras Island.

“We did fine other than we lost power,” he said. “There are 20 concrete pilings and anchors holding this home down.”

He admitted, however, he is concerned about the potential for other storms to hit the area.

“I really can’t hardly think about,” he said. “I also feel so sorry for the poor people in the Bahamas” who were hit with the Category 5 effects of Hurricane Dorian.

Another person who received damage during Hurricane Florence and recently moved back into her home is Ruthie Mae Pinckney of Beaufort, an 84-year-old widow on a fixed income.

During Florence, flood waters came up to the windows of her small house on Broad Street. Torrential rains poured through her roof. She was forced to move from her home and in with her daughter while repairs were made.

Thanks to assistance from United Methodists Responding to Disaster teams, Ms. Pinckney has now moved back into her house, which received a new roof, flooring and other repairs.

“I moved back in July 1,” Ms. Pinckney said Friday. “During the storm, everything in my house was nothing but water. They had to tear everything out, even the floors.”

Yet another person who suffered the wrath of Hurricane Florence was Tracie Wade-Cronkhite of Cedar Point, a data manager for White Oak Elementary and Bogue Sound Elementary schools. Her home sustained major structural and water damage.

She and her husband opted to remain in their home while doing repairs themselves. A year ago they were forced to live in two rooms of their house while they worked on others.

Today, Ms. Wade-Cronkhite said she and her husband have finished the master bedroom and living room.

“We still have the kitchen ceiling and kitchen to go,” she said Friday. “We have a backroom that we’re now using for storage because we couldn’t afford a storage unit anymore.”

Ms. Wade-Cronkite said she and her husband have struggled with getting the supplies they need and have opted to stop moving ahead with repairs until this hurricane season is over.

“Now with hurricanes coming back through, we’ve decided to wait so we don’t have to redo something,” she said. “It’s just really slow going, and we’ve learned to be OK with that.”

Ms. Wade-Cronkhite is among many school employees and students who were displaced or whose homes were substantially damaged.

She, like many others in the school system, received financial assistance from the Carteret County Public School Foundation.

Tabbie Nance, who oversees distribution of funds for the foundation, said to date, the foundation has received more than $410,000 in donations specifically designated to help school system students, employees and their families recover from Florence.

“We have invested about $322,000 of that money to date to fund many rebuilding projects,” she said in an email Friday. “In the first days and weeks after the hurricane, we addressed the immediate needs of food, gas, clothing, tarps, lumber and more. As those needs evolved, so did the Foundation’s response.”

“We have provided funding to move working parents and their children from tents and campers as recently as last month into homes,” Ms. Nance said.

She also said the foundation currently has projects underway, including two roofing projects.

“The recovery from Hurricane Florence is not over for our county’s students, employees and their families, and we will continue to need donated funds,” Ms. Nance said.

Funds can be donated to Carteret County Public School Foundation at 107 Safrit Drive, Beaufort, NC 28516. The foundation is a nonprofit served by a 12-member, all-volunteer board of directors. Donations are directly invested in the designated projects.

Ms. Wade-Cronkhite said she’s grateful for the support she received from the foundation and the community.

“It’s nice to know that people still care,” Ms. Wade-Cronkhite said. “We need to make sure we don’t forget there are people still out there recovering.”

Chico Pitner is my step-dad. I've left a link below of the paper he was in last year that outlined my parents devastation.

It's so nice to see the contrast from them to now. Thank you for sharing their story one year later. We knew they'd come back better than before by the grace of God.