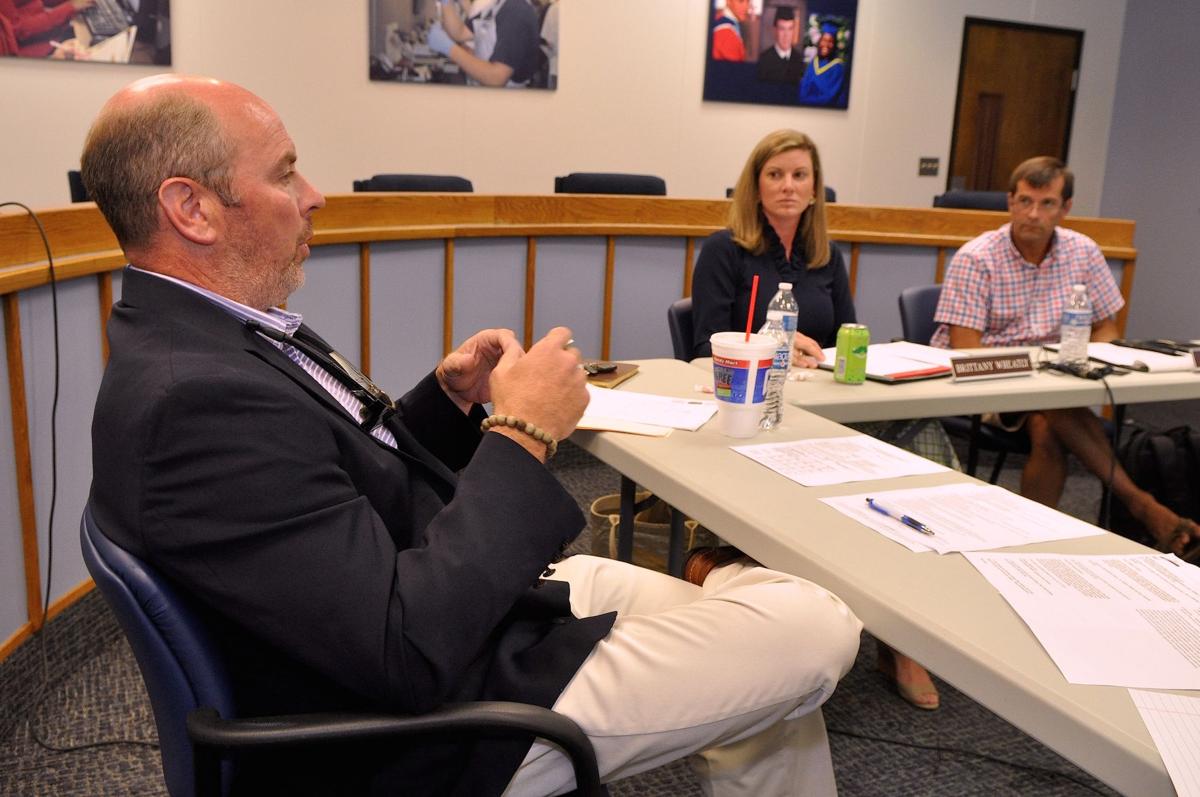 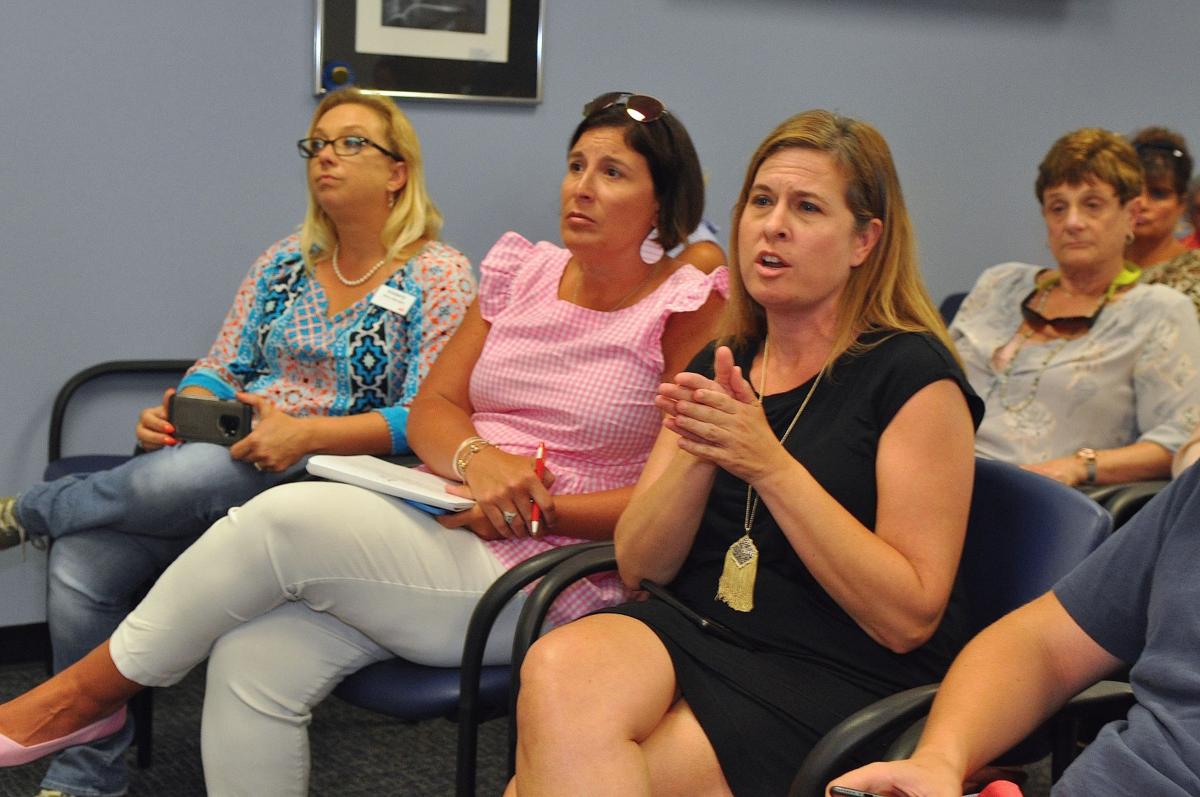 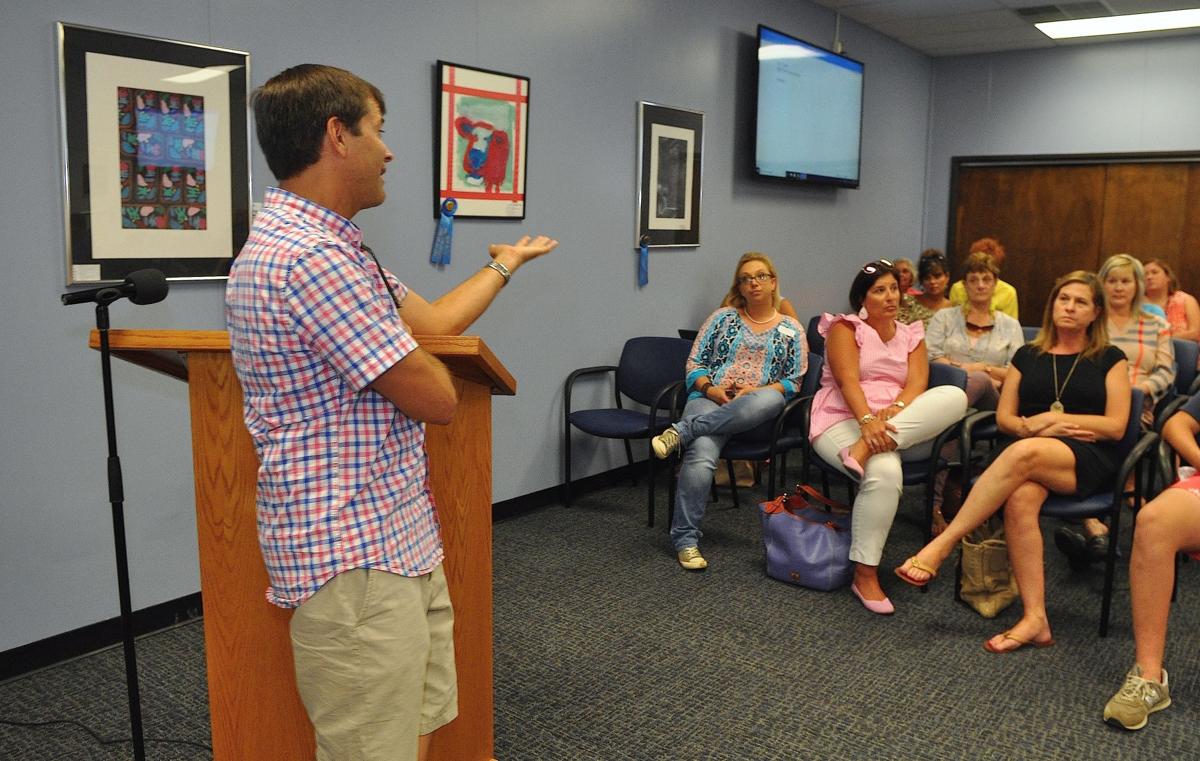 County Board of Education chairman Travis Day talks to Marine Science and Technologies Early College High School parents and families Tuesday prior to the start of a committee meeting to study the impacts of closing MaST. (Cheryl Burke photo)

County Board of Education chairman Travis Day talks to Marine Science and Technologies Early College High School parents and families Tuesday prior to the start of a committee meeting to study the impacts of closing MaST. (Cheryl Burke photo)

BEAUFORT — A County Board of Education committee assigned the task of studying and beginning the closure process for the Marine Science and Technologies Early College High School kicked off its work Tuesday.

The board’s curriculum, finance and technology work group, which makes up the committee, met in the school system’s central office boardroom on Safrit Drive. Members of the committee are board Chairman Travis Day, John McLean and Brittany Wheatly.

Once the committee completes its study and holds a public hearing, the full board will vote on whether to close the school, which opened last year on the campus of Carteret Community College. The school allows students to gain high school and college credits simultaneously and was scheduled to open Wednesday, Aug. 7 for the 2019-20 academic year.

That means the committee has to move fast, according to attorney Neil Whitford.

“The fact is you don’t have a whole lot of time,” Mr. Whitford said.

School assistant superintendents Blair Propst and Richard Paylor said the decision needs to be made by Thursday, July 25 in order for administration to have time to hire staff or transfer MaST staff to other schools and reassign MaST students back to their home districts.

In order to do that, much of the meeting was used to develop, then approve, a timeline to make the deadline. As it stands now, the timeline involves gathering comments from MaST parents and students by Monday, July 15 and gathering comprehensive data from staff and others on the effects the closure will have on the school system, county and families.

Mr. Whitford is charged with compiling data into a report by Friday, July 19. That information will be presented to the work group at a meeting at 2 p.m. Monday, July 22. If approved, the report will be made available to MaST parents, the public and other school board members.

The board will then hold a public hearing at 6 p.m. Wednesday, July 24 to take comments regarding the MaST closure. The tentative date for the board to vote on the closure is 6 p.m. Thursday, July 25, based on whether other board members can attend the meeting.

After setting the schedule, committee members went through a list of items they want included in the study. They also accepted suggestions from several parents, grandparents and others.

Items that will be considered in the study include impact on students, the profile of students applying at MaST, the impact of MaST on other schools, the academic evaluation of MaST, funding sources and impacts on the local budget.

Mr. Whitford said he came up with the suggested outline for the study based on the state statute regarding public school closures, recommendations from the State School Boards Association and what he felt school board members would want to know regarding the closure of a school.

Several parents in attendance said they felt the study would be biased and suggested allowing an outside independent source to conduct the study.

“You have people on the committee that already voted to close the school. How can that be fair?” asked Carol Robinette, who has a grandchild attending MaST.

Ms. Wheatly, as did other members of the committee, agreed that would be a good idea to ensure transparency, but the timeline may make that difficult. They instructed staff to check into seeing if an outside source was available and what the cost would be.

Mr. Whitford assured the board and parents the study would be transparent and fair.

Following the meeting, MaST parent Lindsay Webb said, “I think it’s very biased. They need to do the right thing and have an outside source do the study.”

As the study begins, the 100 students who were slated to start at MaST are in limbo. Several families have indicated they would home-school their students rather than return to public schools.

The school opened last year with 50 freshmen, and was scheduled to start with 50 new freshmen and the rising sophomore class. MaST was scheduled to add 50 new students over the next three years, capping at 200.

The issue of closing the school has been controversial.

Despite pleas from upset MaST parents, students and supporters the board voted June 20 in a split vote of 4-3 to not use local funds to keep the school open. Instead, some board members said they wanted to use those funds to save seven teacher positions that may be lost due to federal and state funding cuts. The lack of funding for MaST would result in the school’s closure.

The school board’s action was based on a recommendation by county commissioners during their June 17 meeting that the school board use $245,958 in county funds earmarked for MaST for the 2019-20 year to save the positions. The county allocated $186,000 for MaST the previous year.

Commissioners and school board members cited concerns over whether the General Assembly would provide state funds for MaST. The current version of the state budget provides $180,000 for the next five years for early college high schools. However, Gov. Roy Cooper vetoed the budget last week over concerns about lack of increased funding for Medicaid and other issues. While the budget debate continues, the state will operate under the current budget, which did not include funding for MaST.

During the commissioners meeting, CCC President Dr. John Hauser said the college was prepared to provide financial and faculty support to keep the school open.

Right on Crabpot. It seems to me that our leaders are unwilling to fund the education of young folks who may be more intelligent than they are.