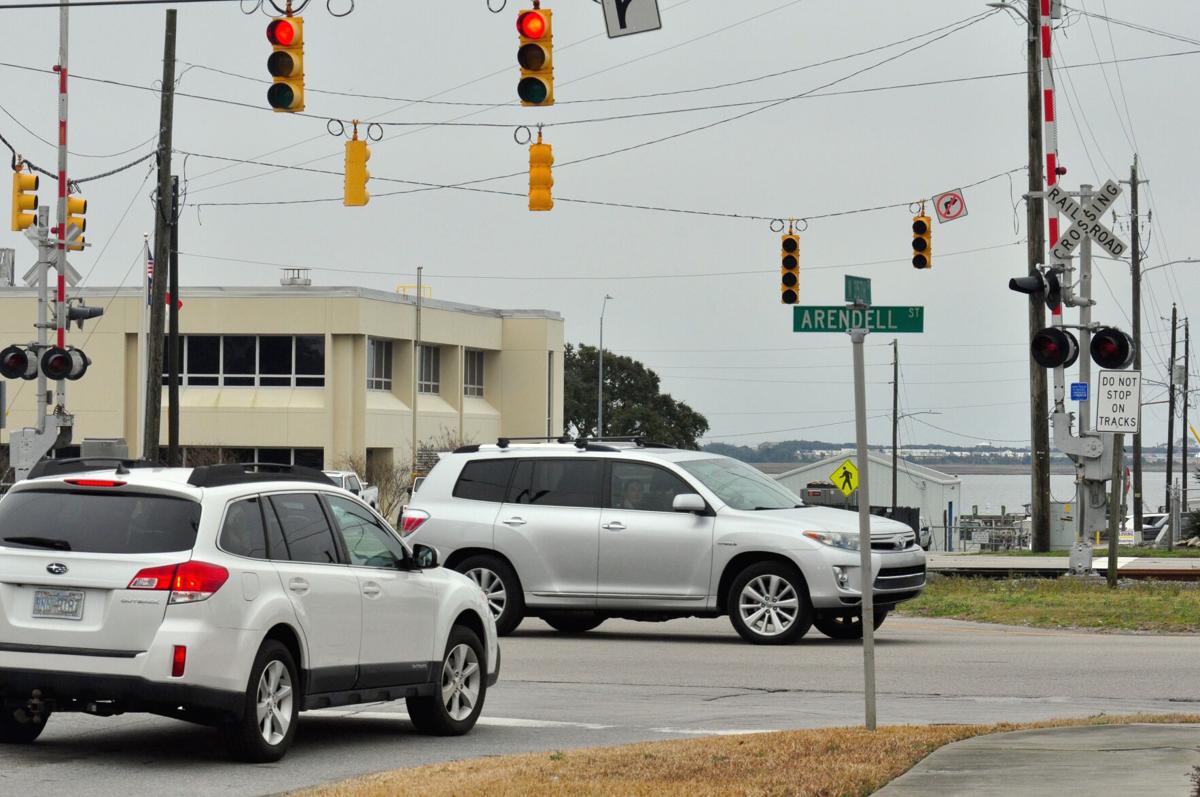 Traffic moves through the busy intersection of 35th and Arendell Streets in Morehead City, where Carteret Community College, Carteret Health Care and the town of Morehead City want to see a crosswalk installed. (Cheryl Burke photo)

This is a conceptual design of a crosswalk that Carteret Community College, Carteret Health Care and the town of Morehead City would like to see installed at 35th and Arendell streets in Morehead City. (Contributed graphic)

MOREHEAD CITY — Carteret Community College, along with Carteret Health Care and the town of Morehead City are joining forces to get a crosswalk installed at 35th and Arendell streets.

CCC President Dr. Tracy Mancini said the college recently approached Morehead City and the hospital with the idea in hopes of providing a safe way for students to cross highly traveled Arendell Street. Both entities endorsed the project.

“We have (medical) students involved in clinicals at the hospital and this would enable them to safely cross the street,” Dr. Mancini said during the Feb. 9 CCC Board of Trustees meeting.

The crosswalk would also fit well with a campus initiative to complete a paved walking path that would eventually tie into a walkway that leads up 35th Street to Bridges Street.

Dr. Mancini said she hopes that with the three entities applying together to the N.C. Department of Transportation for the project, it will stand a better chance of being approved. Plus, she said NCDOT has tentatively agreed to provide partial funding, with CCC, the town and the hospital splitting the remaining cost. The estimated price tag for the project is $180,000.

Dr. Mancini said she would like to see NCDOT provide 50% of the cost, with CCC, the hospital and Morehead City each providing $30,000 to pay the balance. She emphasized, however, the effort is in the beginning stages.

“We are simply getting the pieces together to submit a stronger application to help get the project funded,” she said.

If NCDOT gives the nod for the project, there is still one big hurdle to jump - receiving approval from the privately owned N.C. Railroad, since the crosswalk would go across their property and tracks on Arendell Street.

The Morehead City Council approved a letter of support for the project during its Feb. 9 meeting. City Manager Ryan Eggleston said the proposal fits well into the city’s long-term goal of improving walkability and pedestrian access throughout town, especially at key intersections like 35th and Arendell.

“Long-term, strategically as we grow our sidewalk and pedestrian traffic, being able to have that safe crosswalk there would be important for the town,” he said.

Mr. Eggleston added the city has attempted to install crosswalks at other major intersections that connect the north and south sides of town, but it requires permission from the N.C. Railroad. He said with the combined support of Morehead City, the hospital and the community college, he hopes the railroad will approve the project.

“Getting across the railroad is a challenge,” Morehead City Public Services Director Daniel Williams said. “We’ve tried it at Friendly (Road) and (Highway) 24, and every time the railroad has not been receptive to a crossing, so this cracks the door.”

CHC has also endorsed the effort. CEO Harvey Case said in an email to the News-Times, “With the continued focus to make our community as safe as possible, we did not hesitate when asked to support a safer crosswalk between the hospital and the college. With an increase in foot traffic, having a designed walk area is better for students who may be crossing the street and also drivers along this busy area.”