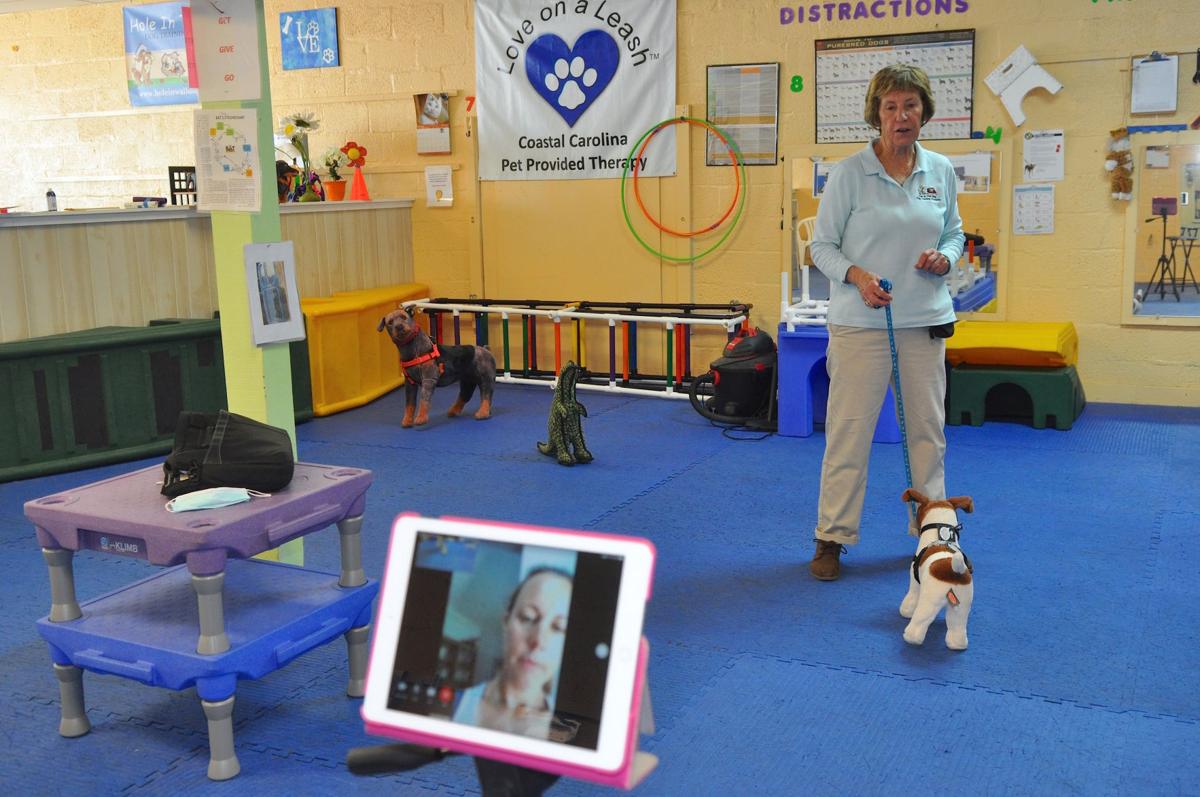 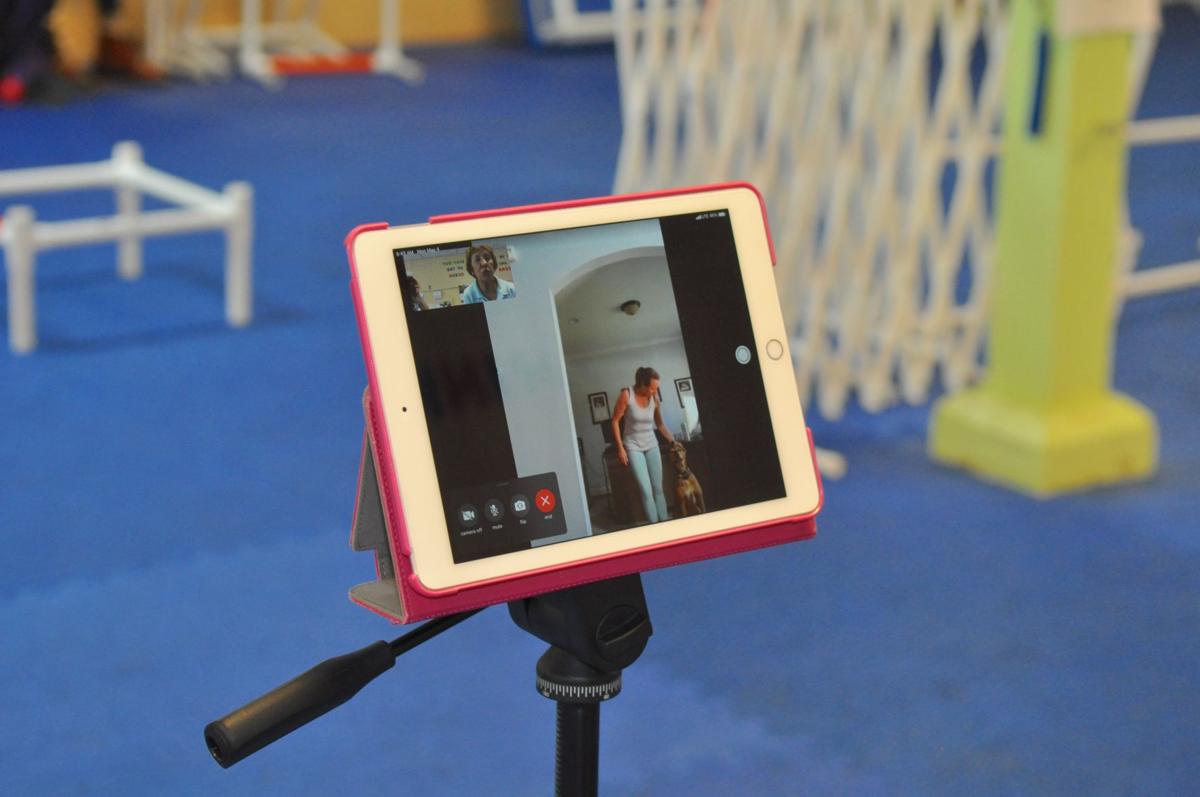 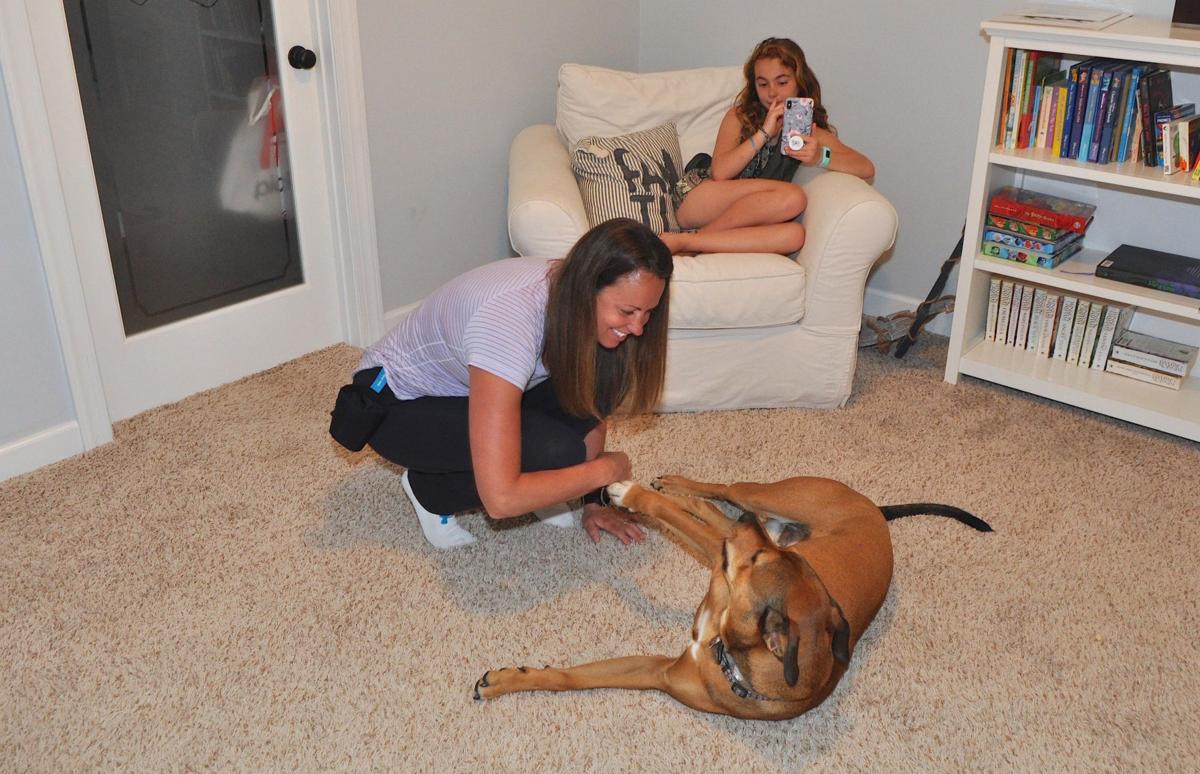 Geraldine Carey of Cedar Point works at home Tuesday with her dog Bentley while her daughter, Addison, 11, videos the dog training session, which was being observed virtually by professional dog trainer Pat Rapaport of Morehead City. (Cheryl Burke photo)

MOREHEAD CITY — When the novel coronavirus pandemic forced longtime dog trainer Pat Rapaport to temporarily shut down her facility, she was concerned about her four- and two-legged clients.

It prompted her to offer online training classes as an option, and Ms. Rapaport said Monday it’s proven so successful she plans to continue offering them when she reopens the facility for group sessions.

“Some people are choosing this time at home to adopt new puppies but are not able to do the normal type of human and dog socialization,” Ms. Rapaport, owner of Hole in the Wall Dog Training facility, said. “Dog owners may also be faced with the possibility of dog separation issues when they return to work. Many dog trainers all over the country are offering online virtual training. It’s a little different from the face-to-face, but it is working.”

Ms. Rapaport said she’s looking forward to when she can open her facility back up for group classes, but until then she plans to continue teaching virtually. She said she has lost about 80% of her business since being forced to close her building on Bridges Street.

“The three options I offered my clients was wait for group classes to start back, take classes virtually or do one-on-one sessions that are socially distanced,” she said. “When I do start groups back, it will only be mini groups. I have plenty of space here, but I know people will still be cautious. I’ll never make back the money I’ve lost. You just don’t make back 80 percent of your loss.”

Ms. Rapaport said she’s filed for emergency funds set up for sole proprietors, but so far has not heard back. She’s working with her landlord on rent. She, like many other small business owners, is hoping she can survive the pandemic.

“I love my profession. I love people and I love dogs and seeing them reach their potential,” she said.

Among those taking virtual classes is Geraldine Carey of Cedar Point and her dog Bentley, a 1-year-old male boxer and pit bull mix. Ms. Carey and her daughter, Addison, 11, were taking Bentley to Doggie Manners classes when the pandemic forced Ms. Rapaport to shut down her group sessions.

When Ms. Rapaport offered the option to continue virtually, Ms. Carey said she jumped on the opportunity.

“We had taken three classes in person and have done two virtually,” Ms. Carey said. “So far it has gone really well. I want to use Bentley as a therapy dog. I have three kids and would like to take him and the kids to retirement homes.”

To facilitate virtual classes, Ms. Rapaport sets up her notebook camera and uses Zoom to demonstrate dog training techniques at her facility while the dog owners observe from their homes. The owners then work with their dogs on the new techniques while Ms. Rapaport watches and makes suggestions.

Sometimes Ms. Rapaport uses one of her personal dogs to demonstrate, while other times she uses a stuffed demonstration dog.

Ms. Rapaport said she meets virtually once a week with other dog trainers from across the nation to learn new virtual teaching techniques and exchange ideas with trainers.

“The meetings are very helpful,” she said. “This is where I learned about Zoom, small business relief packages and puppy socialization tips.”

Ms. Rapaport said she’s concerned about the impacts of social distancing and saty-at-home orders on dogs, puppies and owners.

“We’ve had a few calls from owners whose dogs are having separation anxiety because the owners are away more or the dogs aren’t getting exercised as often,” she said.

“On the other hand, while it’s nice that many dog owners are home all day because their workplace is shut down, that can create another set of problems because a dog has a set routine. They are used to their owners being gone, and now all of a sudden they aren’t getting their nap or fed at a certain time. I tell owners to try to stay with as much routine as possible. If a dog is normally fed at 6 a.m., continue to feed them then. Also be aware that once you return to work there may be some separation anxiety.”

Dogs many times display separation anxiety by tearing something up.

While she encourages dog owners to continue taking walks and exercising their dogs, don’t overdo it.

“If you’re constantly walking your dog when they’re not used to it, that can be harmful,” she said.

Another issue is owners who aren’t used to being with their dogs all day are losing their tempers with their pets, she added.

For new puppy owners, Ms. Rapaport said it’s important to find ways to expose them to different socialization situations, even with social distancing in place.

“Get them out of the house a couple of times a day, even if it’s just driving around the block. This gets them used to riding in a car. It let’s them see other people and they need to see other dogs,” she said. “They need to be exposed to things in different environments.”

If an owner doesn’t have a car, they can dress up in different outfits, such as wearing hats and a raincoat, or have a neighbor come over so the puppy sees different people. Owners can also put boxes out in their house so the puppy learns to adjust to different things in their environment.