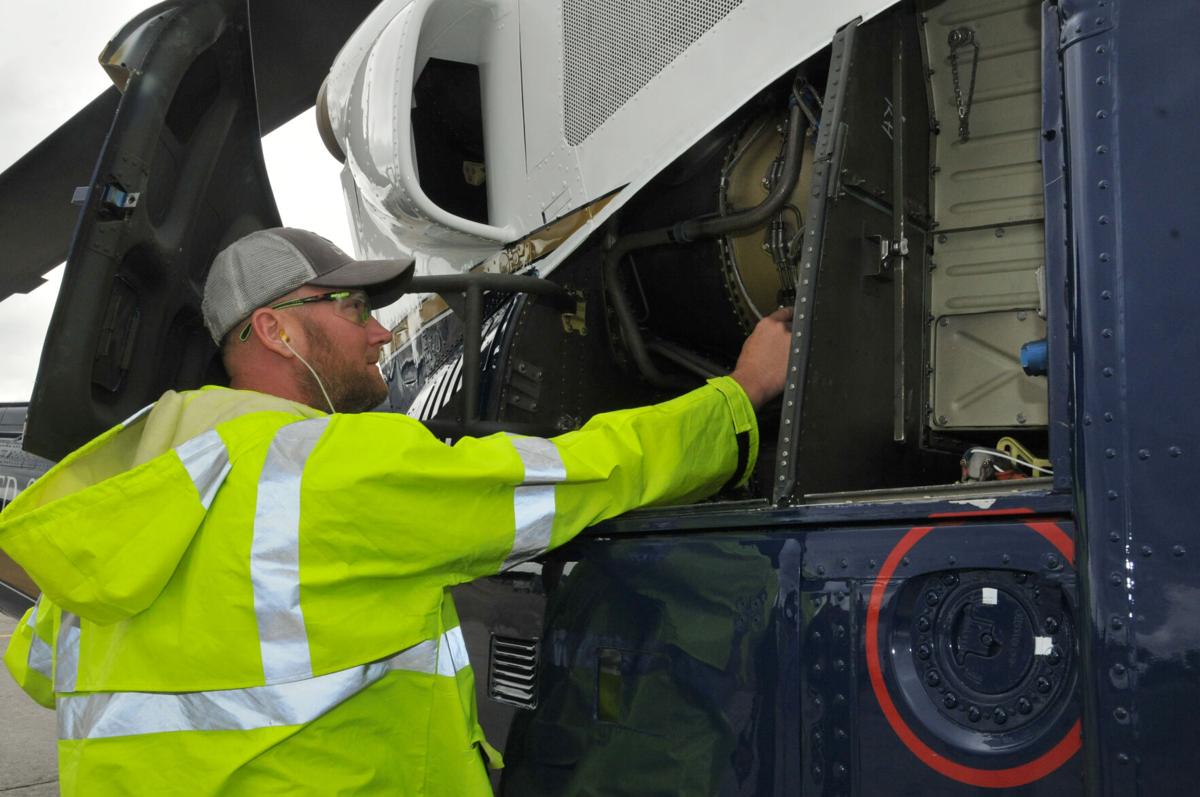 Jeremy Archer, a Fleet Readiness Center East aircraft worker, inspects a P3 filter bowl on a UH-1N helicopter recently before its first test flight in about 15 years. The helicopter arrived at FRC East as a hybrid of U.S. Air Force and U.S. Army configurations. (Contributed photo) 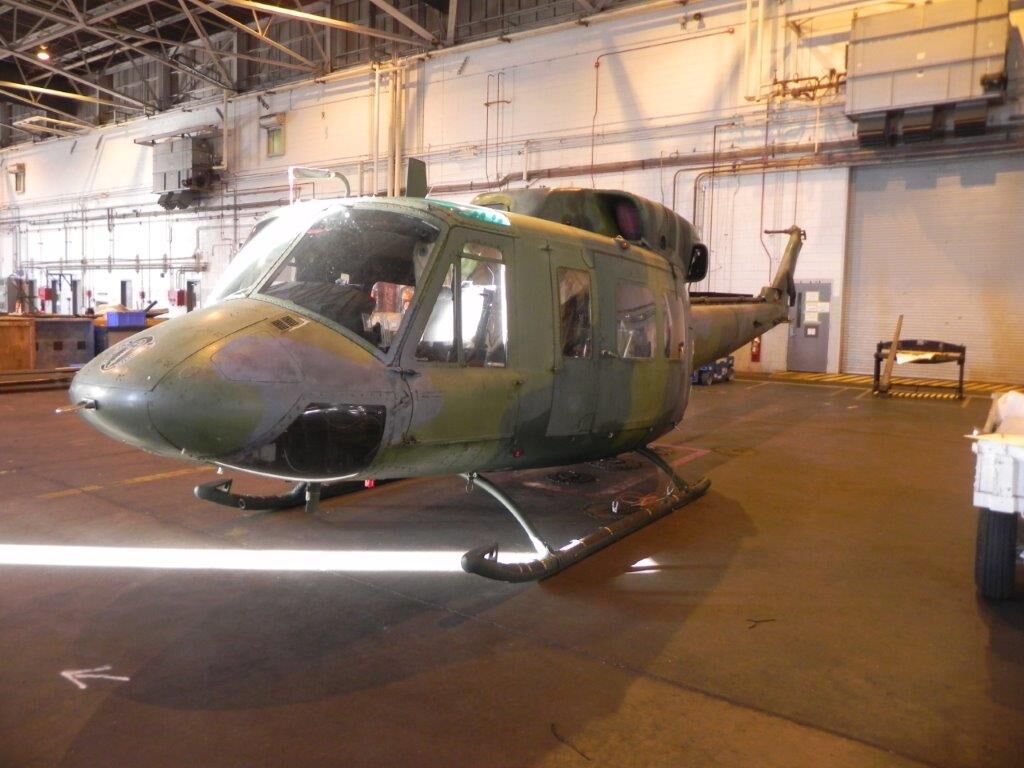 The UH-1N helicopter sits just arrived at Fleet Readiness Center East for overhaul in August 2016. The aircraft arrived in boxes on a flatbed truck after years of storage. (Contributed photo) 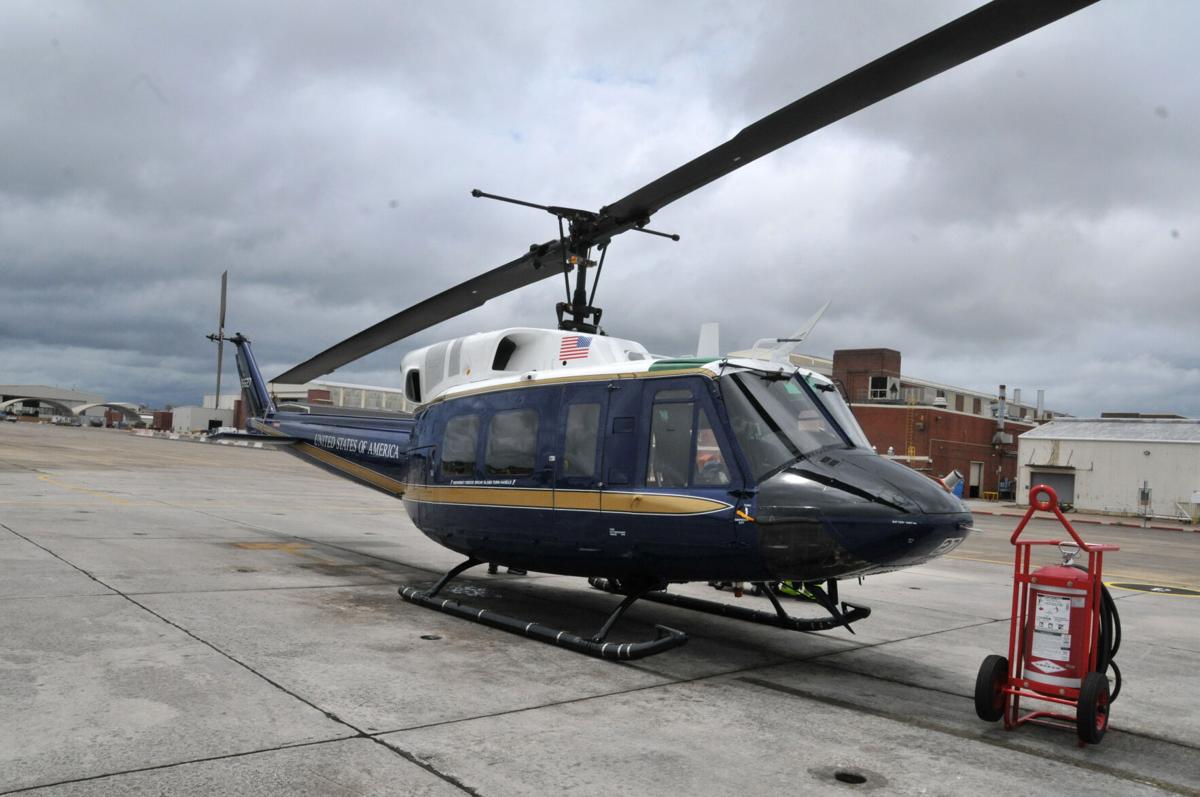 CHERRY POINT — The aircraft maintenance professionals at Fleet Readiness Center East are ready for a challenge, but when the U.S. Air Force asked the facility to bring an H-1 Huey up to current configurations after it spent more than 10 years sitting in storage, the artisans faced a bigger challenge than expected.

The UH-1N Huey started its service life as an Air Force aircraft before it was loaned out to the U.S. Army about 15 years ago. It had been mostly reconfigured for Army service, but still maintained certain hallmarks of Air Force requirements. When the Army no longer needed the aircraft, it was placed in unpreserved storage.

The helicopter arrived at FRC East for depot-level maintenance overhaul in August 2016, according to Travis Beamon, FRC East aircraft planner.

“It arrived in a configuration typical to the Army, but it was listed as belonging to the Air Force,” Mr. Beamon said. “This created huge hurdles for Air Force engineers to grasp what condition the aircraft was in.”

Daniel Taylor, H-1 work leader, has been on the H-1 line since before the helicopter arrived at the facility for depot overhaul and remembered the neglected condition in which the aircraft reached FRC East.

“The Air Force decided to locate their loaned aircraft, so they could restore it and return it to service,” Mr. Taylor recalled. “The aircraft showed up at Cherry Point in boxes on a flatbed truck.”

The aircraft was a hybrid of Army and Air Force requirements and was years behind on time-based upgrades and modifications issued by the Air Force. Everything from navigation systems to electrical wiring to radio equipment had to be updated and converted. Funding issues had to be resolved, and engineering plans had to be created. All these questions had to be answered without technical manuals or the aircraft’s maintenance history, and the answers required agreement from a number of key players. All these obstacles created a time-consuming sequence of events.

The aircraft’s radio system provides a good example of the complex decision-making process planners, engineers and other stakeholders faced before work could begin to upgrade the helicopter, said Gunnery Sgt. Christopher Manuel, H-1 military branch deputy director at FRC East, who serves as the liaison between FRC East and its military customers.

“We had a really old style Army-type radio and a partially converted ARC 186 radio system, which is typically what the Air Force uses,” Mr. Manuel said. “There was confusion between the actual wiring diagram, the tech data, the radio configuration, what the Army had installed, what the Air Force wanted installed, what technical compliance orders had been followed, and how we were going to get to the solutions the custodian required for flight operations.”

A severed coaxial cable that ran the length of the cabin from the tail boom to the cockpit added to the confusion, as it was not indicated in any instruction or technical manual. Just when Air Force engineers were scheduled to visit FRC East to resolve the radio issues, coronavirus guidelines forced them to cancel their trip.

The project seemed to be at a standstill once again, but Mr. Manuel said it was at this point his role as liaison between FRC East, the military customers and other stakeholders proved its value.

“The ultimate outcome of this was that our plan was accurate, precise, and exactly what needed to happen,” Mr. Manuel said. “Once we had engineering approval, we went into the implementation phase of our formulated plan for FRC, executed that plan, and ran all of our required operational checks and functional check flight requirements. Everything checked out as advertised by the tech data.”

“It was very exciting and very rewarding to know that after all the hard work that had gone into this aircraft, we were the first two Marines to fly it in the better part of 15 years,” Mr. Pitts said. He compared the aircraft to a “classic muscle car,” noting it is the only UH-1N in the Air Force inventory that doesn’t have any digital gauges or upgraded avionics in the cockpit.

According to Mr. Pitts, the aircraft was recently returned to the custody of the Air Force’s 1st Helicopter Squadron at Joint Base Andrews, Md., although it has temporarily been sent to Kirtland Air Force Base in New Mexico.

“I spoke with the command that received (the helicopter). Their aircrew flew it back with no issues and they are glad to have it back in the fleet,” he said. “Their current plans are to have it accepted and flying on their flight schedule, training new pilots to fly as soon as possible.”

Completing such a monumental project is a credit to the skill and dedication of all the professionals associated with the H-1 team at FRC East, said Allen Broadway, UH-1N helicopter maintenance repair and overhaul branch head.

“It’s really a testament to all the artisans and engineers and other personnel who put in the hard work required to get this aircraft back to the customer,” Mr. Broadway said. “It shows their passion, and even if they’re given a box of parts without current technical documentation, they can achieve great success using the proper resources and technology.”

Better to have put this in a museum.

I wouldn't fly in it. Of course I might not fly in any helicopter. Too many go down.