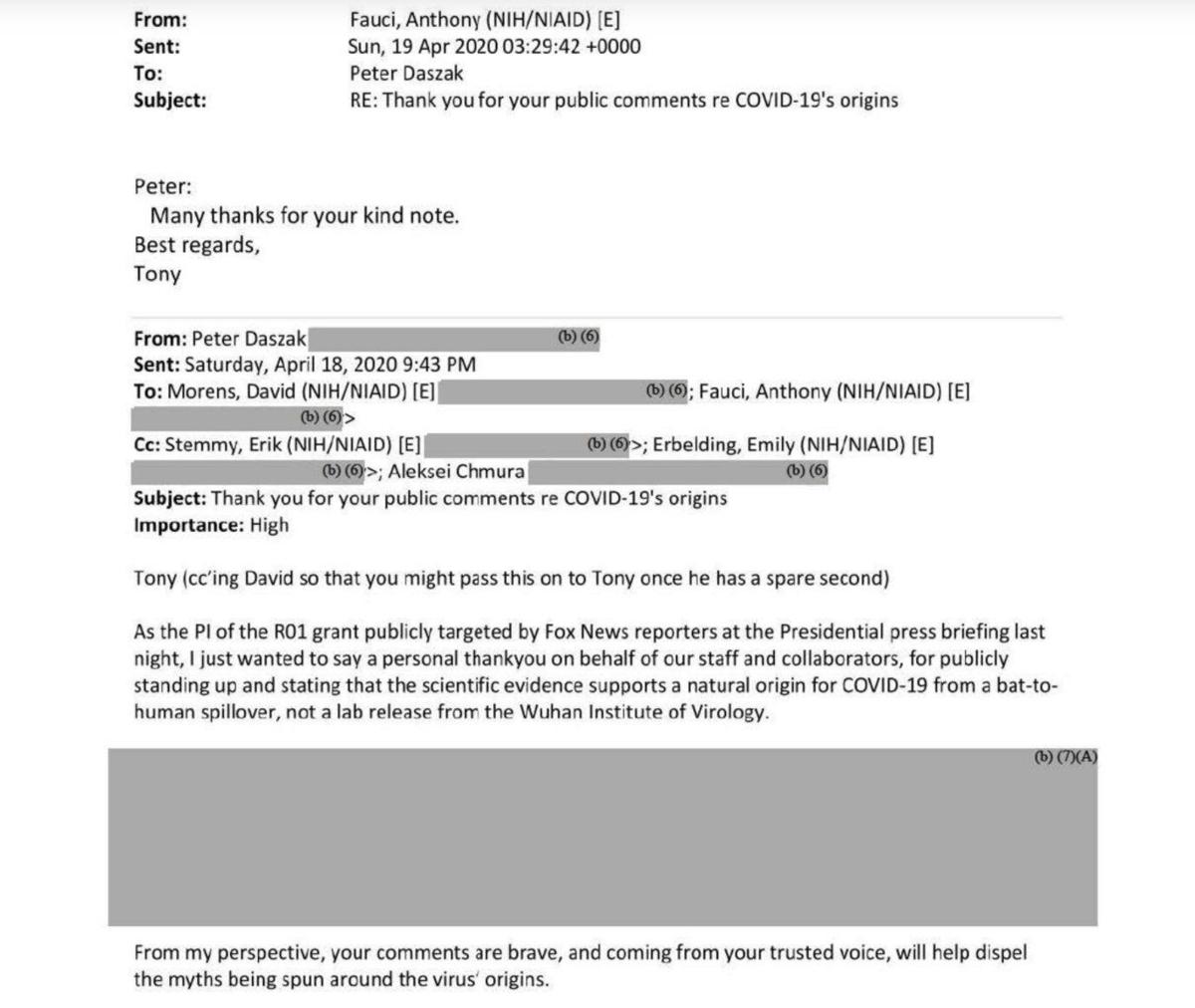 Peter Daszak, who was deeply involved both in Wuhan coronavirus research & in misleading the public about the likelihood of a lab leak, thanked Fauci for helping "dispel the myths" around COVID origins and blamed Fox News for targeting his grant.

The leader of a nonprofit group with close ties to the Wuhan Institute of Virology personally thanked Dr. Anthony Fauci in April 2020 for publicly rejecting the notion that the lab could be connected to the release of COVID-19.

EcoHealth Alliance President Dr. Peter Daszak’s April 18, 2020, email to Fauci was part of a 3,200-page batch of Fauci’s emails obtained by BuzzFeed News on Tuesday through a Freedom of Information Act (FOIA) lawsuit. A large portion of Daszak’s email to Fauci was redacted with a FOIA exemption indicating the text could reasonably be expected to interfere with law enforcement proceedings.

Daszak personally thanked Fauci in the email for the bravery he exhibited during a White House press briefing the day prior when he said the novel coronavirus exhibits features that are “totally consistent” with an animal to human origin and that don’t point to lab manipulation.

Fauci’s comments were framed at the time by media outlets such as Business Insider as a rejection of the lab leak “conspiracy theory.”

“I just wanted to say a personal thankyou on behalf of our staff and collaborators, for publicly standing up and stating that the scientific evidence supports a natural origin for COVID-19 from a bat-to-human spillover, not a lab release from the Wuhan Institute of Virology,” Daszak wrote to Fauci.

“From my perspective, your comments are brave, and coming from your trusted voice, will help dispel the myths being spun around the virus’ origins,” Daszak added.

The email was first highlighted by reporter Sarah Westwood.

Fauci responded to Daszak the following day thanking him for his message of encouragement, the email shows.

Fauci altered his position on the lab leak theory in May, telling PolitiFact’s Katie Sanders that he was “not convinced” that COVID-19 developed naturally.

EcoHealth Alliance did not immediately return a request for comment.

EcoHealth Alliance, under Daszak’s leadership, funneled $600,000 in taxpayer dollars to the Wuhan Institute of Virology prior to the pandemic to conduct risky experiments on bat-based coronaviruses, the Daily Caller News Foundation previously reported.

Experts say the National Institutes of Allergies and Infectious Diseases (NIAID) research grant with EcoHealth, which involved payments to the Wuhan lab, described gain-of-function research. However,  NIAID, which is led by Fauci, declined to flag the grant for independent review by a Department of Health and Human Services oversight board that was formed in late 2017 to critically evaluate gain-of-function research grants.

Daszak played a key role at the onset of the pandemic in suppressing debate about the possibility that the Wuhan Institute of Virology could be connected to the COVID-19 outbreak.

Daszak orchestrated a statement published in The Lancet medical journal in February 2020 prior to any serious research on the origins of COVID-19 condemning “conspiracy theories” that suggest the virus doesn’t have a natural origin. Daszak later admitted through a spokesman that he organized the statement to protect Chinese scientists from online criticism.

Daszak was also the only U.S. citizen allowed to participate in the World Health Organization’s investigation into the origins of COVID-19 in China in January and February. The WHO did not even ask to see deleted Wuhan Institute of Virology databases containing information on at least 16,000 virus samples it had studied prior to the pandemic because Daszak said he personally vouched for the lab.

Daszak then said U.S. intelligence on the Wuhan Institute of Virology shouldn’t be trusted after he and his WHO colleagues concluded it was highly unlikely COVID-19 leaked from the lab.

Numerous media outlets have published stories within the past two weeks confirming the legitimacy of the COVID-19 lab leak theory after denigrating the hypothesis as a baseless conspiracy for the first year of the pandemic.