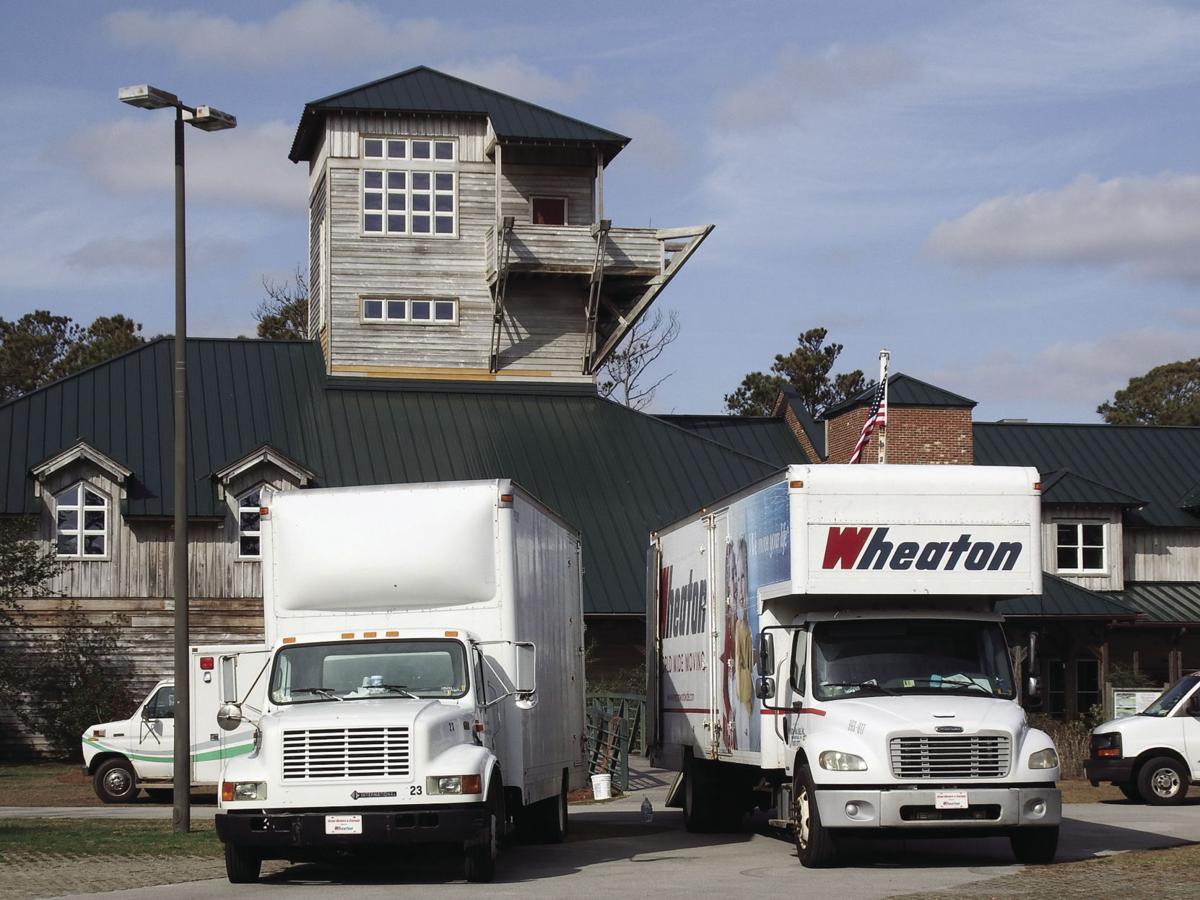 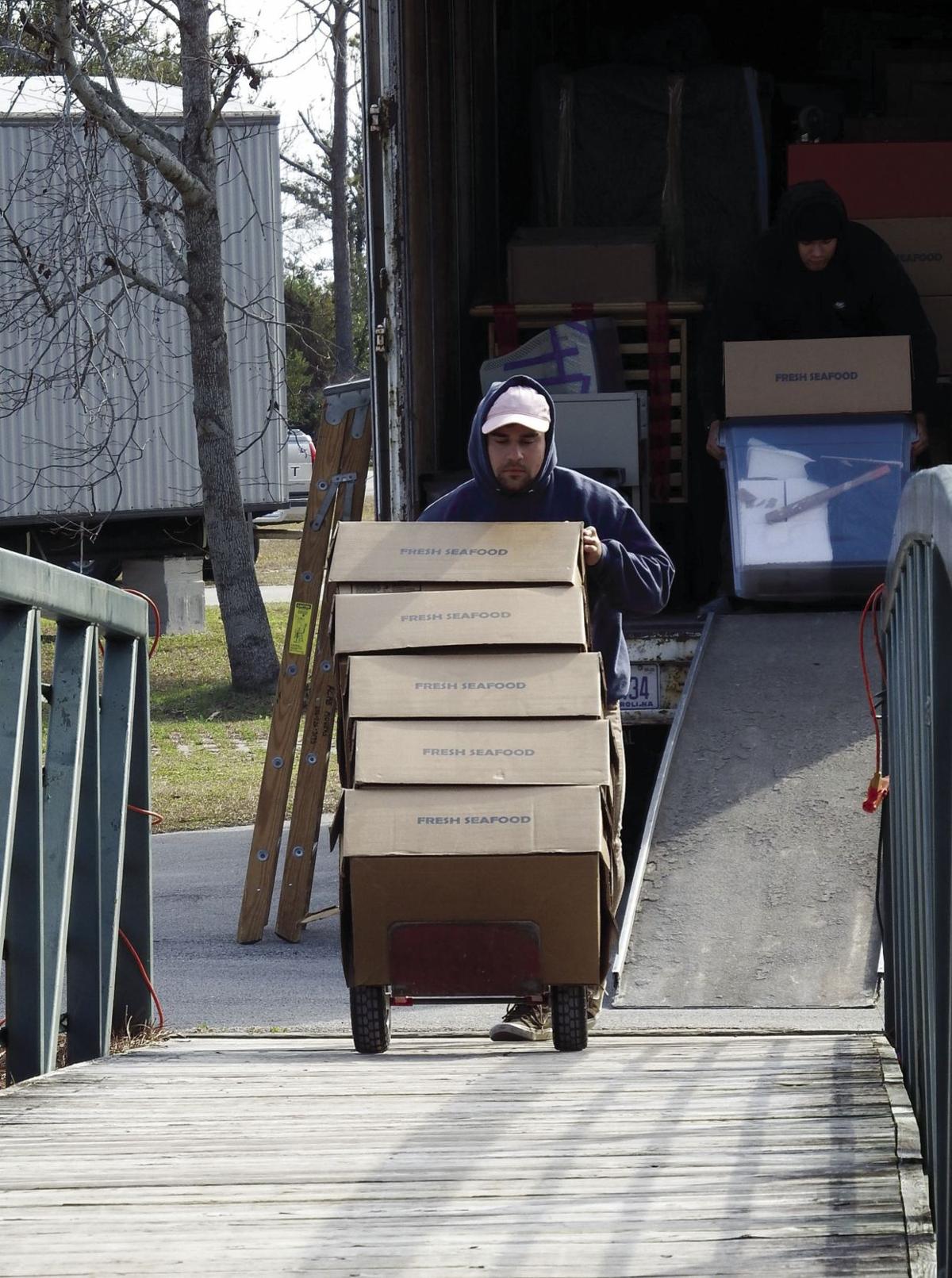 HARKERS ISLAND — Neither rain nor wind nor a global pandemic will keep the Core Sound Waterfowl Museum & Heritage Center from reopening.

Twenty months after it received extensive damage from Hurricane Florence and nearly two months after its reopening was delayed due to the coronavirus, the doors at “the end of the road” in Harkers Island are set to swing open at 10 a.m. Friday.

“It looks good,” Executive Director Karen Amspacher said. “We’re still working on exhibits, but we’ll open the doors Friday, and people can come in. Everything is back. It won’t all be unpacked. I don’t know if it ever will be.”

The place at 1785 Island Road isn’t finished, but it’s ready.

Amspacher said nearly 1,500 boxes filled with museum materials were removed from the building after Hurricane Florence and then returned in recent months to be unpacked.

Pam Morris, the collections manager and head of community resources and operations, has been on location day and night working to get it ready for the public.

“My responsibility is the people and money, keeping the train on the track, but she deals with all of our stuff,” Amspacher said. “So the pressure has been on her, to find these exhibits, clean them, set them up. She has done the best work she’s ever done.”

It has been a Herculean effort to bring the museum back to life.

When a Servepro cleaning and restoration team member told Amspacher there was mold everywhere after rainwater from Florence damaged the roof in September 2018 and that everything had to go, she had questions.

“Where am I going with it, where is it going? I remember David Mason telling me if we wanted to save it, we had to get it out. I was numb,” she said.

Servepro tore out 90 percent of the sheet rock and all the floors in November 2018.

What followed was a seemingly endless search for space after nearly 1,100 fish boxes and hundreds of other tubs and boxes were filled with museum items. There was furniture, library books, display cases, exhibition panels, and of course, so many precious decoys.

“It felt like I was in every empty building this side of Raleigh looking for space,” Amspacher said. “Everything from the pots and pans to the pencils had to go. We had to take everything out. We didn’t have time to think, we just had to get it out.”

With space at a premium – many in the county were looking for storage after the hurricane caused major damage throughout the area – museum materials were scattered from pillar to post.

Boxes were housed in nine different locations, including the space below Moore Orthopedics and Sports Medicine and in the Center for Marine Sciences and Technology (CMAST) building in Morehead City, as well as the empty First Citizens Bank on Front Street in Beaufort.

Museum Board Chair (and editor and publisher of the News-Times) Lockwood Phillips set up a meeting with John Gainey, who in November 2018 let the museum use his building at 806 Arendell Street in Morehead City. Instead of a storage facility, the building became a community outpost.

Amspacher described that development as “making lemon pies out of lemons.”

“I can’t emphasize enough the role that 806 has played,” she said. “That has been our lifeline. It’s been good to us.”

Affectionately known as 806, it has served as a gift shop, offering a gallery, selling the always popular crab pot Christmas trees, among other items, in addition to offering decoy carving classes, painting classes, and children’s activities.

“That has saved the organization, and allowed us to stay going,” Amspacher said. “806 has been wonderful, it really has. We see 10 times the number of people there than we do at Harkers Island.  We’re working on finding a way to keep that going.”

In an example of getting kicked while they were down, the coronavirus and the state’s shelter in place and social distancing orders required the museum to close 806 on March 21. It opened back up last Friday night when those restrictions were largely lifted.

The pandemic also delayed the reopening of the museum on April 1.

“We were all geared up for that,” Amspacher said. “When that got pulled out from under us, that was a pretty hard blow. It was kind of demoralizing. We had events planned for every weekend in April but we canceled all of those.”

Undaunted, the museum team has continued throughout the 20-month process. The annual Core Sound Decoy Festival weekend was held during each of the past two years despite repairs. In 2018, it was held in a building that was down to its studs and concrete floors.

“We knew we had to have it because you have to keep the money coming in,” Amspacher said. “We rolled with it, and raised money for the roof.”

She praised the work of Thomas Simpson Construction for putting on the new metal roof.

“Everyone was scrambling for a contractor after the storm, but we were willing to wait for Tommy because he built the building,” Amspacher said. “It was the best decision we have ever made. His son, Nick, is excellent, and has really worked with us. They cared about the building, because it was theirs, and they know we had been through so much trying to build it the first time.”

The endeavor to start the museum was a struggle from day one.

The plan was created in 1992, and a 21-member board of directors was appointed including carvers, area businessmen, and local government representatives.

It began operations in a temporary facility next door to the Harkers Island School and Fire Department while construction on the building began in 1999. The educational wing of the building was completed in 2003, and the operations and programs moved from the temporary location into the new facility, beginning the true outreach and community work. The gallery finally opened in 2009.

“When we started, we had Purcell (Jones), Billy and Janice (Smith), James Davis, that crowd,” Amspacher said. “Now that is a different crop of people. Some said we couldn’t do it. Billy had the original vision, and when he died, Janice kept it going. It took a lot of money and a lot of battles. Every step was hard.”

In addition to Hurricane Florence and the coronavirus pandemic, and the deaths of many of its founders, the museum had to endure Hurricane Isabel in 2003, the Great Recession of 2007-2008 and Hurricane Irene in 2011. Amspacher was also involved in a serious automobile accident in 2009.

“We’ve proven over 28 years, that we might get knocked down, but we aren’t going to stay down,” she said. “We’re not going to give up. That is not an option.”