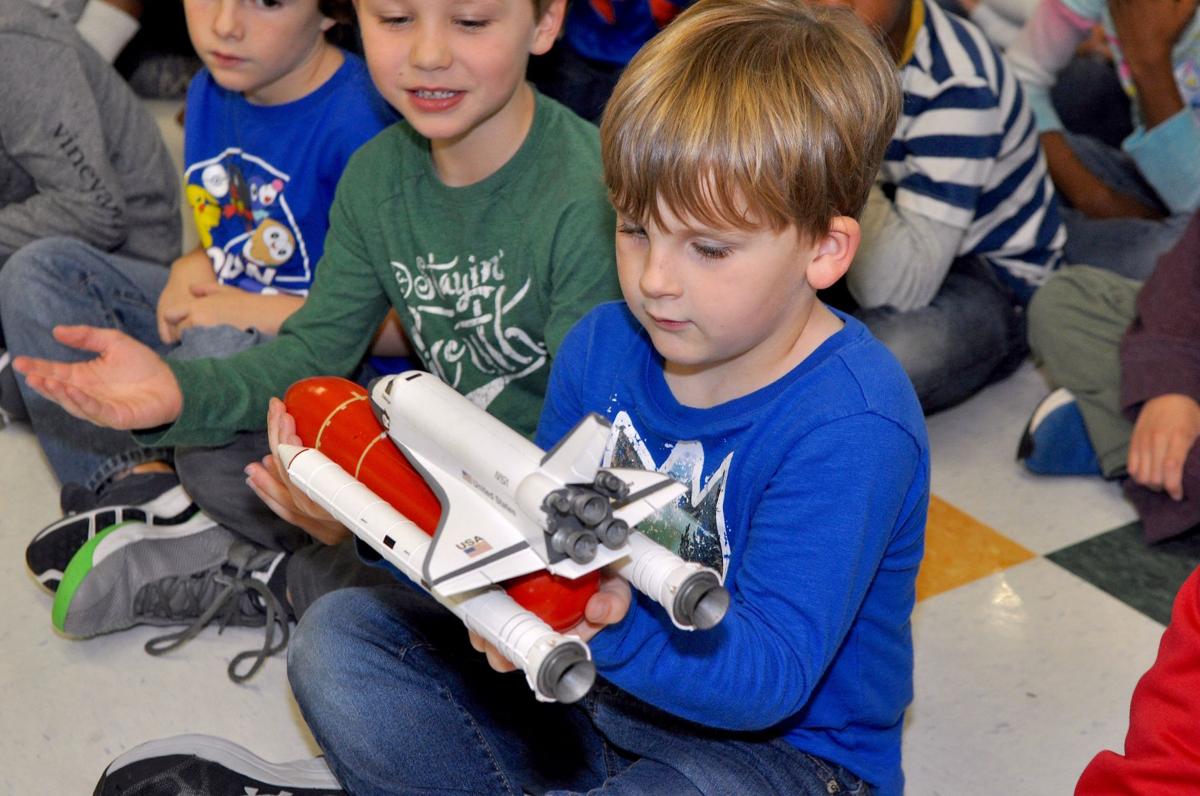 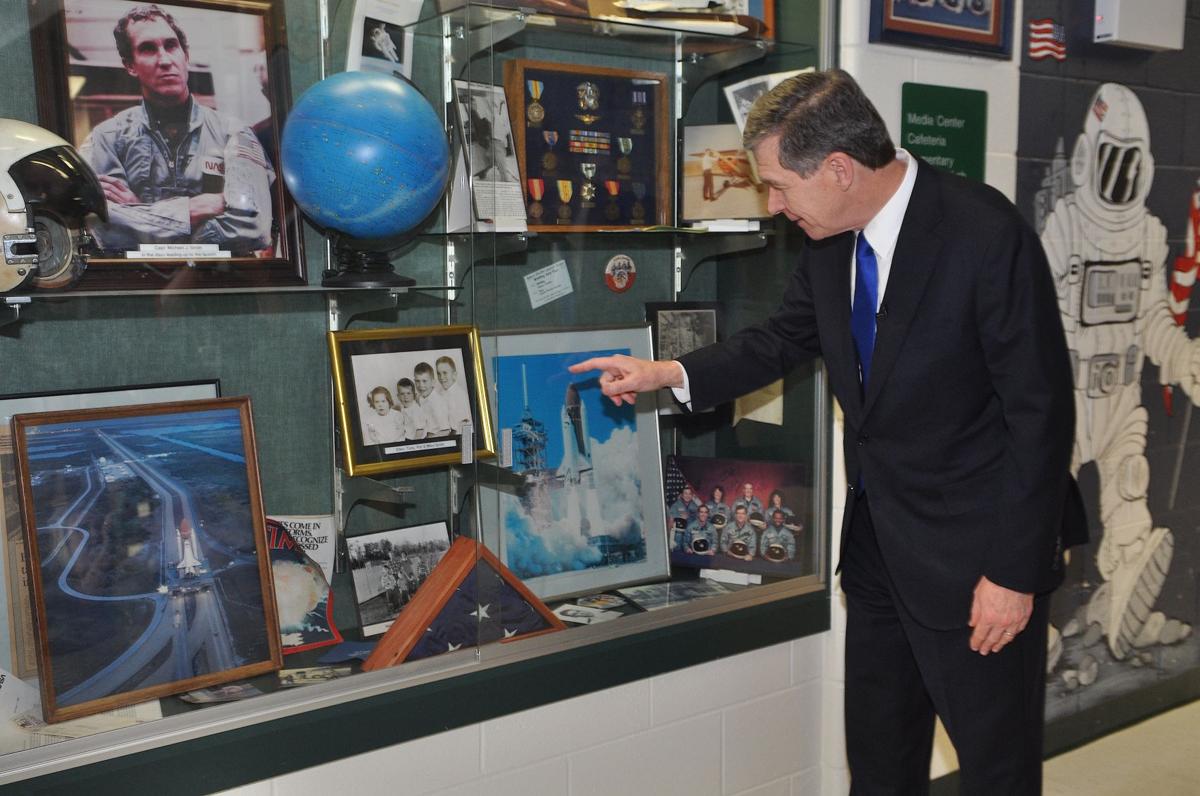 Gov. Roy Cooper, during a Jan. 17 visit to Beaufort Elementary School, looks at the Michael J. Smith Mini-Museum that was created at the school to honor the late pilot of the space shuttle Challenger. (Cheryl Burke photo)

Gov. Roy Cooper, during a Jan. 17 visit to Beaufort Elementary School, looks at the Michael J. Smith Mini-Museum that was created at the school to honor the late pilot of the space shuttle Challenger. (Cheryl Burke photo)

BEAUFORT — With Monday marking the 33rd anniversary of the explosion of the space shuttle Challenger, students at the Boys & Girls Club afterschool program at Beaufort Elementary School have been doing projects to honor the memory of the crew, particularly the shuttle’s pilot, Capt. Michael J. Smith.

Capt. Smith, a town native, graduated from Beaufort High School, which sits empty just down the street from the newer elementary school.

A mini-museum in Capt. Smith’s honor is on display in the school’s lobby, and Boys & Girls Club members have studied items in the museum that belonged to Capt. Smith, many donated by the Smith family.

Ava Bryant, director of the Boys & Girls Club afterschool program and a friend of the Smith family, is passionate about keeping Capt. Smith’s memory alive and using the museum to inspire future generations.

“These kids walk through the halls of this school every day and many of them don’t understand what the museum is about, and they need to know,” she said. “We’ve had other schools come here to see the museum, and we need to make sure our kids know what Capt. Smith and his crew did.”

Using items from the museum, she teaches the children about Capt. Smith’s life and the space shuttle program. She’s allowed students to handle some of the museum objects, including a helmet that had been worn by Capt. Smith during a previous mission. She also let them hold a model of the space shuttle.

Ms. Bryant said she was especially excited to watch as Gov. Roy Cooper, during a Jan. 17 visit to the school, viewed the mini-museum as he visited with students and teachers during a tour of the school and businesses.

“I heard him say he knew the family and it was special to watch his reaction as he looked at the museum,” she said.

Ms. Bryant is also assisting with two other projects to honor Capt. Smith.

“I’ve been asked to help organize a ceremony when they unveil a historic marker in Capt. Smith’s honor this summer,” she said.

The historic marker will be placed at 180 Airport Road near the Michael J. Smith Field in Beaufort, the airport named in his honor. Capt. Smith took his solo flight as a teen at the airport.

In addition, Ms. Bryant was asked recently to assist with a project that will include items from the mini-museum in a digital museum about the role of North Carolina in the space program. It is being created by the N.C. Department of Natural and Cultural Resources. Items related to Capt. Smith will also be included in an exhibit that opens in April at the N.C. Museum of History in Raleigh.

In an email to the News-Times Friday, Jessica Bandel, digital editor with the historical research office in Raleigh, said, “Michael Smith’s story will be included in both the online and museum exhibits. Both will include the North Carolina state flag that Mike took up on that Challenger flight. For the marker dedication itself, we’re extremely happy to take a support role and let the Beaufort community, led by Ava Bryant, determine how best to honor Smith’s life and sacrifice.”

Beaufort Elementary School Principal Karen Wood praised Ms. Bryant for her hard work, and agreed having the museum at the school offers a great teaching tool.

“Having the Michael Smith Mini-Museum at our school is a wonderful asset,” Ms. Wood said in an email. “Aside from bringing history to life through the artifacts that the Smith family has been kind enough to share with us, it also serves as a great reminder to all of our students that it doesn’t matter your background or where you grow up... You can always reach for the stars. Michael J. Smith was proof of that.”

Ms. Bryant said it’s important to honor Capt. Smith and his family members, many of whom still live in the county, for their sacrifice. Some of his great-nephews and nieces currently attend Beaufort Elementary School and the Boys & Girls Club, and a nephew and niece teach at East Carteret High School.

Ms. Bryant said she attended school with some of Capt. Smith’s nephews and nieces, and her parents knew the family.

“I remember the day of the explosion. I was a little girl, but I remember hearing the knock at the door and someone telling my parents about the explosion,” she said. “My parents got us and we went over to the (Smith) family homestead. Other people were doing the same. Everyone just felt they needed to do that.”

Another childhood memory Ms. Bryant has is of her classmates joining hands around the school’s flagpole each year for a moment of silence on the anniversary of the Challenger explosion. She plans to do the same Monday with club members, as well.

Club members, like BES fifth-grader Nathan Huber, who took part in activities Thursday, said they were excited to have the museum at the school.

“I’ve always wanted to be an astronaut and learn about space,” Nathan, whose father is a Harrier pilot, said. “I want to colonize Mars. I’ve made that my goal and am studying hard to achieve it. When I came here and saw the museum, I remember just staring at everything in it. I’ve learned all about Capt. Smith.”

As for the mini-museum, it was opened Jan. 28, 2010, by Capt. Smith’s family and retired Principal Vicki Fritz, who wanted to honor Capt. Smith and inspire a love of space in students.

Items contained in the museum include an American flag that was carried onboard one of Capt. Smith’s flight missions, a helmet worn by Capt. Smith, a shuttle tire, a tail hook from the aircraft carrier on which Capt. Smith served, flight medals and memorabilia from his family and friends.

In addition, Capt. Smith’s family created a scholarship in his name that is given out each year to county high school students.

After high school graduation, Capt. Smith went on to graduate from the U.S. Naval Academy in 1967 and was a fighter pilot during the Vietnam War, earning numerous decorations for combat, including the Distinguished Flying Cross. After the war he became a Navy test pilot and was selected in May 1980 for the astronaut program.

Congress promoted him posthumously to the rank of captain and a chair was named in his honor at the U.S. Navy Postgraduate School. Among his other posthumous awards is the Purple Heart medal.

(Historic information about the Challenger disaster, Capt. Smith and future missions are based on information from NASA’s website.)