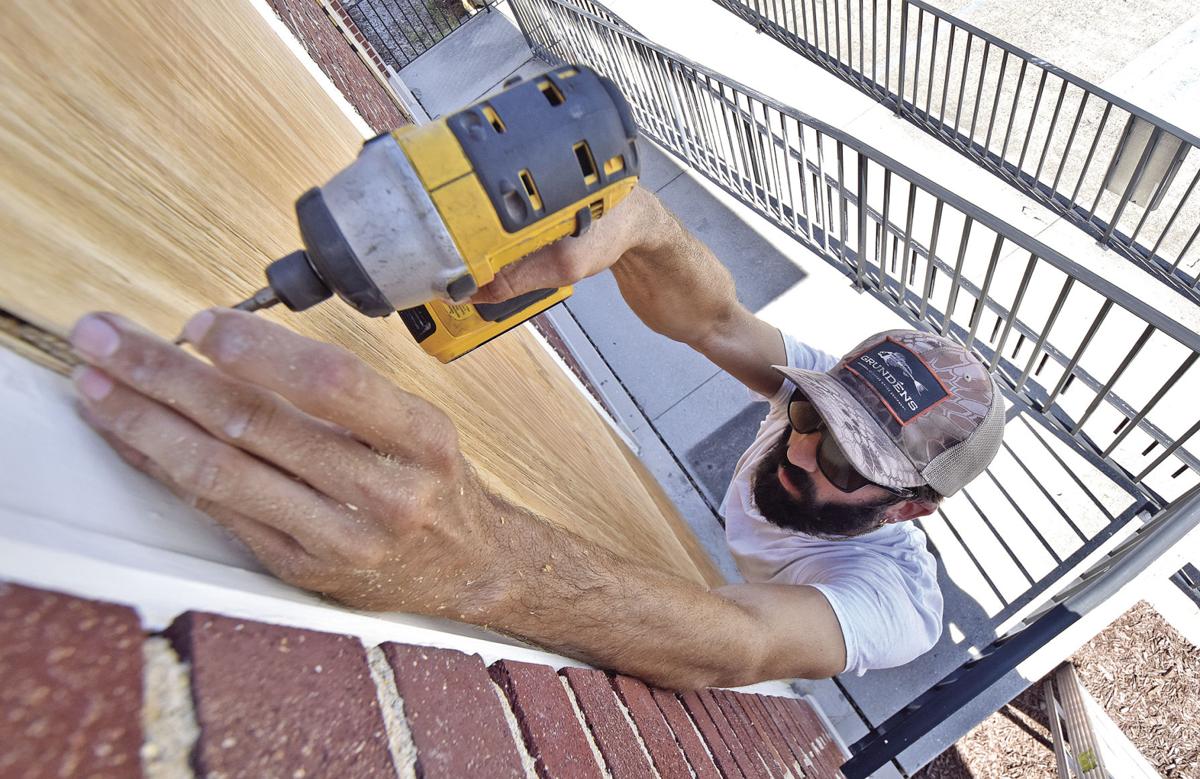 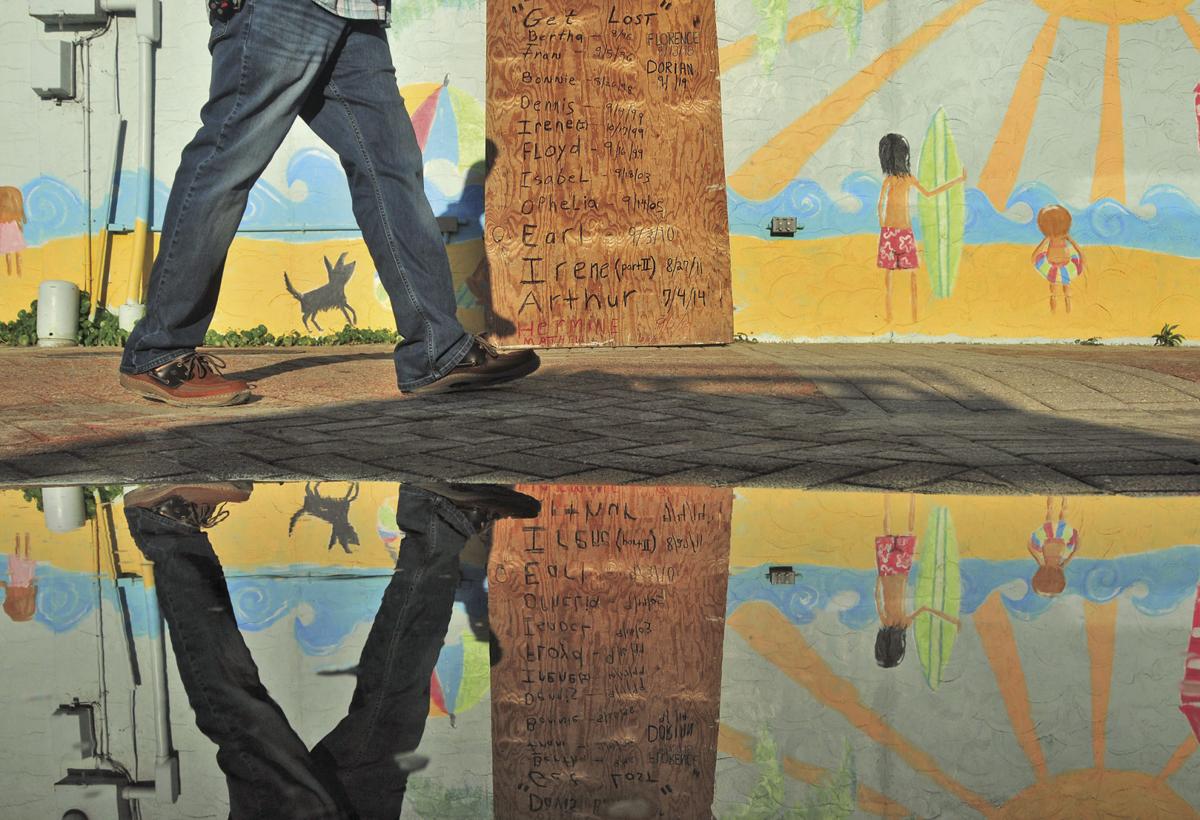 BEAUFORT — Carteret County Schools and Carteret Community College are preparing buildings ahead of Hurricane Dorian, expected to hit the coast as early as Wednesday.

In addition, officials of both institutions announced closings for students and staff.

All county public schools will be closed Wednesday through Friday for students and staff. The make-up days will be Monday, Oct. 7 and Thursday and Friday, Jan. 2-3, 2020.

As well as concern for students, Superintendent Mat Bottoms said employees have been preparing buildings, which took a major hit last year during Hurricane Florence.

“School employees are taking precautionary steps by securing items such as athletic wind screens, trash cans and flags, and getting sand bags ready for east facing doors,” Mr. Bottoms said. “The roof on Morehead City Middle School, currently under repair from Hurricane Florence, has been secured and sand bags are being placed on the roof at Croatan High School, the last roof needing replacement due to Florence.”

Mr. Bottoms said SouthernCAT has been contacted and is on stand by in case schools lose power for several days. SouthernCAT is the disaster restoration team that worked quickly last year to repair and secure buildings after Hurricane Florence.

Mr. Bottoms also said more than the welfare of buildings, he is concerned about students and staff.

“I am very concerned about the mental health of our staff members and our students as they remain in the healing stages from Florence, just one year ago.  Our employees will again be called upon to be stabilizing factors, the caring, compassionate adults for those in need. Our school buildings will remain a place for normalcy and calm.”

Meanwhile, all throughout Carteret County, residents are bracing themselves for the major storm inching its way up the Atlantic coast. Tuesday, home and business owners could be found boarding up windows and securing the final pieces for their emergency kits.

Carteret County officials declared a state of emergency that took effect Tuesday, and there are voluntary evacuation orders in place for the entire county. Officials also announced an emergency, pet-friendly shelter will open at Newport Middle School beginning Wednesday around noon.

Some areas have upped the evacuation orders to mandatory. On Tuesday, North Carolina Gov. Roy Cooper issued a mandatory evacuation for all the state’s barrier islands, including Bogue Banks, to take effect Wednesday.

Beaufort announced its own mandatory evacuation of all town residents beginning at 3 p.m. Tuesday. The town has also initiated a curfew, which “goes into effect for the Town of Beaufort from sunset to sunrise beginning on Thursday, Sept. 5, 2019 to remain in effect until modified or rescinded,” according to the latest release from the town.

“We urge all citizens to adhere and evacuate to safety as soon as possible,” it continues. “All citizens should be at a safe location by early Wednesday evening, Sept. 4, 2019.”

Elections officials also announced that due to the uncertainty of Hurricane Dorian, one-stop early voting in the 3rd Congressional District special election will close Wednesday. Organizers said voting will end at 11:30 a.m. The election is still scheduled for Tuesday, Sept. 10.

He urged those with boats, recreational vehicles and trailers to leave as early as possible. All residents and visitors, he said, should “plan to be in a safe location” by 10 a.m. Thursday.

The town took the unusual step of opening town hall on Labor Day Monday to accommodate property owners who wanted to pick up re-entry passes.

Another decision by the town was to order some big rental stormwater pumps and the generators to run them. Last year, during Florence, the town ordered generators and pumps, but flooding from torrential rains held up the delivery. It then took days before the pumps were able to significantly reduce flooding in streets and yards, particularly in the Coast Guard Road corridor.

“We haven’t decided where those pumps would go,” Mayor Eddie Barber said Monday. “We’ll wait and see where they are needed, if they are.”

Town work crews have been out checking all storm drains and cleaning them out if needed, according to Mr. Zapp. In addition, he said, “We have contacted all of the homeowners’ associations that have retention ponds to draw them down as much as possible if they have the capacity to do so.”

The town canceled trash service Wednesday and Thursday. In addition, officials asked people not to put out any more debris for the duration of the week.

The town is also working closely with Carteret-Craven Electric Cooperative to deal as quickly as possible with any power outages that might occur.

Finally, Mr. Zapp said, the town plans to send out updates to residents and property owners twice a day, using email, texts and Facebook, as it did during Florence.

Over on the mainland, Morehead City Communications Manager Alizé Proisy said the city plans to activate its Emergency Operations Center at Fire Station No. 2 beginning Wednesday. City residents are under a voluntary evacuation, but Ms. Proisy said any changes will be posted to the city’s Facebook page and website.

In Cape Carteret, Town Manager Zach Steffey said he was riding around town Tuesday making sure everything was ready.

“We’re taking a wait-and-see attitude on that for a little while,” Mr. Steffey said of mandatory evacuations, “but the concern is that regardless of the track the storm takes, we appear to be looking at some storm surge.”

He said he knew some people were leaving town Tuesday and hoped more would follow Wednesday.

“We want them to take that into consideration,” he said.

In addition, crews are removing all objects from town property that might blow and become problematic in high winds, such as picnic tables and other items in parks. Town hall was also boarded up.

Mr. Steffey said he, other key staffers and town police will stay at town hall, should it become necessary. In the wake of Hurricane Florence, storm-proof windows were installed and there is room for cots for staffers to sleep.

“We’re taking the steps today we need to take to be ready for whatever happens,” Mr. Steffey said “We’ve already checked out the generator to make sure it is ready to go.”

In Cedar Point, the town canceled a Wednesday special board of commissioners’ meeting to get residents’ opinions on a proposal to apply for a state grant for amenities in a new park on the White Oak River.

Staff said late Tuesday afternoon that although officials declared a state of emergency and ordered voluntary evacuation, there likely will not be a mandatory evacuation order for Cedar Point.

In Bogue, Mayor Ricky Taylor followed the county’s advice and declared a state of emergency and asked for a voluntary evacuation of the small town along Highway 24 between Cape Carteret and Morehead City.

“The town will follow all county recommendations for planning and evacuations. Please prepare your household for power outages, and effects of a hurricane,” the mayor wrote.

In Peletier, Mayor Dale Sowers said Tuesday afternoon the town had neither declared a state of emergency nor requested evacuations. Either was possible, though, he said, but not before Wednesday.