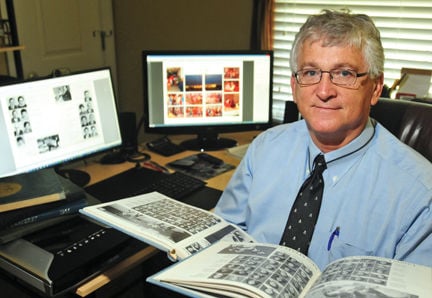 Joel Hancock of Harkers Island sits in his computer room where he spends long hours converting annuals from East Carteret High School and Beaufort High School into digital files to be placed on the Internet for all to research and enjoy. (Dylan Ray photo) 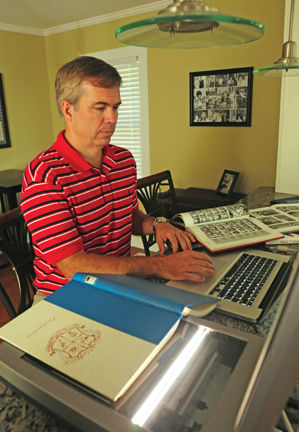 Joel Hancock of Harkers Island sits in his computer room where he spends long hours converting annuals from East Carteret High School and Beaufort High School into digital files to be placed on the Internet for all to research and enjoy. (Dylan Ray photo)

Mr. Hancock was the first to upload a yearbook, starting with the 1966 yearbook from ECHS, the first year of the school after it was assembled out of the merging of the Beaufort, Atlantic and Smyrna high schools, with Smyrna itself having absorbed Harkers Island High School previously. That was roughly three months ago.

“I try to do about one a week, and it takes about four hours to prepare one,” he said. “I have to scan them, format them, and put them into a presentation. I’ve been putting them into slideshow format for people to copy, and a video presentation set to the music of that year.”

Mr. Hancock’s most recent upload was of the 1994 yearbook for a class reunion.

Mr. Adams’ interest in his own yearbook project started shortly after that, when he embarked on a quest to find a 1968 ECHS yearbook for his mother. His friend Karen Willis Amspacher, executive director of the Core Sound Waterfowl Museum and Heritage Center, pointed him in the direction of Mr. Hancock.

It was shortly after meeting with Mr. Hancock and learning about his yearbook project that Mr. Adams decided to start one of his own, focusing instead on the yearbooks from WCHS.

His plan is to post a photo album, slideshow and PDF download link every Friday for each year until all the yearbooks are online.

“I’ve always been interested in yearbooks since I was a kid,” Mr. Adams explains. “I liked looking at my parents’ yearbooks.”

Mr. Adams is not the only resident in Carteret County with an appreciation for old yearbooks, apparently. Mr. Hancock reports that the yearbooks he uploads will typically receive about 600 views once they go up on Facebook, with viewership going up as he began uploading the more recent ones. He also said that pages of old teachers tended to get more views than pages of students.

“I find that pages of teachers get more interest than pages of students. Teachers affected so many, and students are more of an individual concern,” Mr. Hancock said.

Yearbooks are acquired from  different sources. Some are from the Carteret County Historical Society, while others are borrowed from their associated high school. A decently sized portion of the yearbooks have been borrowed from others in the community.

“For each one I’m missing, I reach out and people usually let me borrow one. It’s been a project in itself, borrowing them,” Mr. Adams said. He went on to explain that his dedication to this project, which he estimates will take a year to complete at his current pace, is out of a feeling of service to the community.

“I respect the heritage we have in this area. There’s a lot of passion for Carteret County. I’d like to do anything I can to show people what it was like in the early days. People remember all of these things very fondly. I’ve heard people say over the years ‘I wish I had this yearbook.’ There are so many reasons they could have lost them. Now, as long as they have a computer, they can look at it.”

Mr. Adams added that the reaction from the community has been positive on Facebook and through personal messages, thanking him for his time and effort. He also mentioned that Mr. Hancock deserved a great deal of credit for inspiring him to begin his project.

“If he hadn’t gotten it started, gotten approval there, I don’t think I would have gotten the idea.”

Mr. Hancock responded that he was “flattered that he (Mr. Adams) would say that, but I’m sure he could have handled that on his own.”

Future projects for Mr. Hancock will be the yearbooks for the Beaufort, Atlantic and Smyrna high schools.

“I’ve got another 30 years of yearbooks to do for East Carteret before I can get to schools like Beaufort, Atlantic and Smyrna. It would certainly be the logical way to go after these (ECHS yearbooks) are done.”

Mr. Hancock went on to elaborate on how he hopes the yearbook project progresses.

Readers can go to carteretcountyyearbooks.com to download PDF versions of the yearbooks, or view Youtube slideshows of the yearbooks. Alternatively, readers can find Mr. Adams’ yearbook project at www.facebook.com/MCHSYearbooks. Mr. Hancock’s project can be found at www.facebook.com/ECHSYearbooks. After visiting those Facebook sites, readers should click on the tab that reads “Photos,” and after that there will be a tab further down the page that reads “Albums,” which will allow readers to view yearbooks by year.

Thank you both for undertaking this project. It is a huge endeavor and will be much appreciated by me, for certain, and others. It will be a wealth of memories!