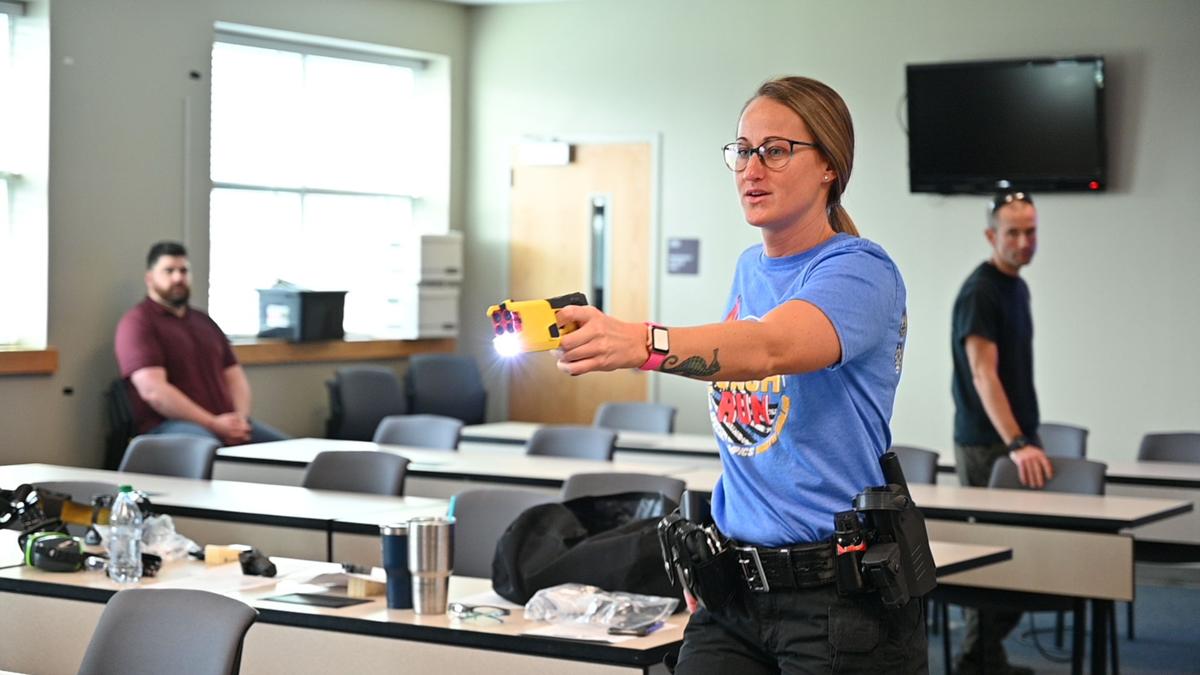 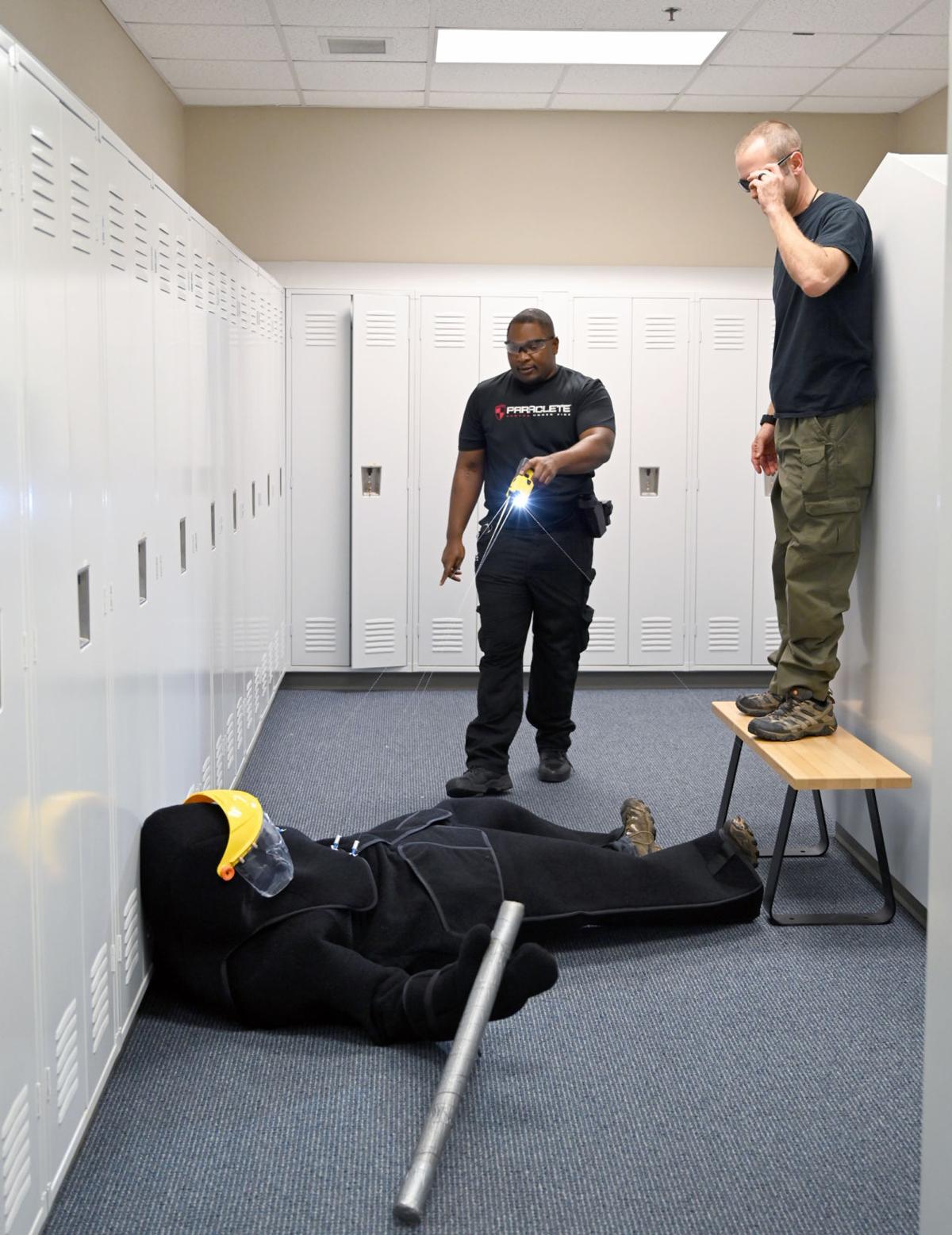 MOREHEAD CITY — Officers with the Morehead City Police Department will soon have a new tool at their disposal to help deescalate dangerous situations while avoiding the use of lethal force: Tasers.

Officers wrapped up Taser training last week and are now certified to use the weapon, a type of stun gun that administers a powerful electric shock to temporarily incapacitate a subject. MCPD Deputy Chief Brian Dixon, who led the training sessions, said every officer on the force is certified, save for a few who were unable to attend training for various reasons. The remaining officers will soon be trained and certified, as well.

“The next step is issuance and fielding. Everybody has completed the training, they’re certified, so now we start putting them (Tasers) out into the field,” Deputy Chief Dixon said. “…They will be available to every unit or shift that’s working.”

The training involved an in-classroom portion where officers learned about the technology behind Tasers, their capabilities, laws surrounding their use and situations in which it would be appropriate to deploy the weapon. Then, they participated in hands-on exercises deploying the weapon on stationary and moving targets. Some officers even volunteered to get first-hand experience of what a Taser shock feels like.

“They would probably  tell you it was the longest five seconds they’ve ever been through, it’s not pleasant,” Deputy Chief Dixon said.

Tasers are able to incapacitate a subject for several seconds, allowing law enforcement to get a handle on situations in which a person is believed to be a threat to themselves or others. Deputy Chief Dixon said the main benefit to using Tasers is they are an alternative to using deadly force when confronted with an uncooperative suspect. In addition, he said they are more effective than most other non-lethal methods, including pepper spray and batons, at incapacitating a subject.

“It can minimize the injury to all parties involved,” he said, adding that Tasers do not cause permanent injury in the vast majority of cases.

Deputy Chief Dixon said there are several levels of escalation before an officer would deploy a Taser and many suspects stand down before it comes to that point. Unlike other varieties of stun guns, Tasers are capable of stunning a subject up to about 15-20 feet away.

“If they’re out of lunging range, the Taser gives you another option before you have to resort to deadly force,” he said.

MCPD is using the latest model of Taser available, the Taser 7. Deputy Chief Dixon said the model uses the most up-to-date technology available, including a feature that keeps a log of when the weapon is activated and other information related to its usage. In addition to body camera and in-car camera footage, the Taser log may be used as evidence in court.

“Over years and years of use, they’ve determined the pros and cons, strengths and weaknesses of the previous models, and from that they’ve developed the model we purchased,” Deputy Chief Dixon said.

While MCPD isn’t the first agency in the county to use Tasers, it’s the only one using the Taser 7, according to the deputy chief. The department only purchased a few Tasers for the first year of the program, but it hopes to eventually equip each officer with one.

‘It can minimize the injury to all parties involved.’

this will end up costing taxpayers well over 100 dollars per month for each taser issued. Imagine the potential for law suits goes up as well as Morehead City will certainly be folks that claimed they were tasered when it was not needed.

[thumbdown] Tazers should be banned. They are not safe, many people have died when this was deployed and I have seen to many videos where the cop abused this power. Terrible decision Morehead!

Got to love those keyboard warriors.....

Kudos MCPD for going with the "LESS Lethal" stance.

This is a very bad idea indeed. First, the cops will certainly abuse this item. They have gotten away with several deadly force situations where they should have been charged. These tasers will be even easier to use, and there will be consequences to their use. I would consider their use too close to deadly force for me. Bad idea, Morehead City.

Cops already have a cavalier attitude about pointing firearms at suspects; something where a citizen in a similar situation would be charged with assault by pointing a gun or worse. This attitude will convey to these tasers as well. I seriously doubt the court will charge a cop with misuse of this device, under any circumstances. Citizens are at undue risk.

And yes, born and raised, there have been deaths associated with this device. There are many medical conditions where this device could be lethal. That is fact, not armchair.