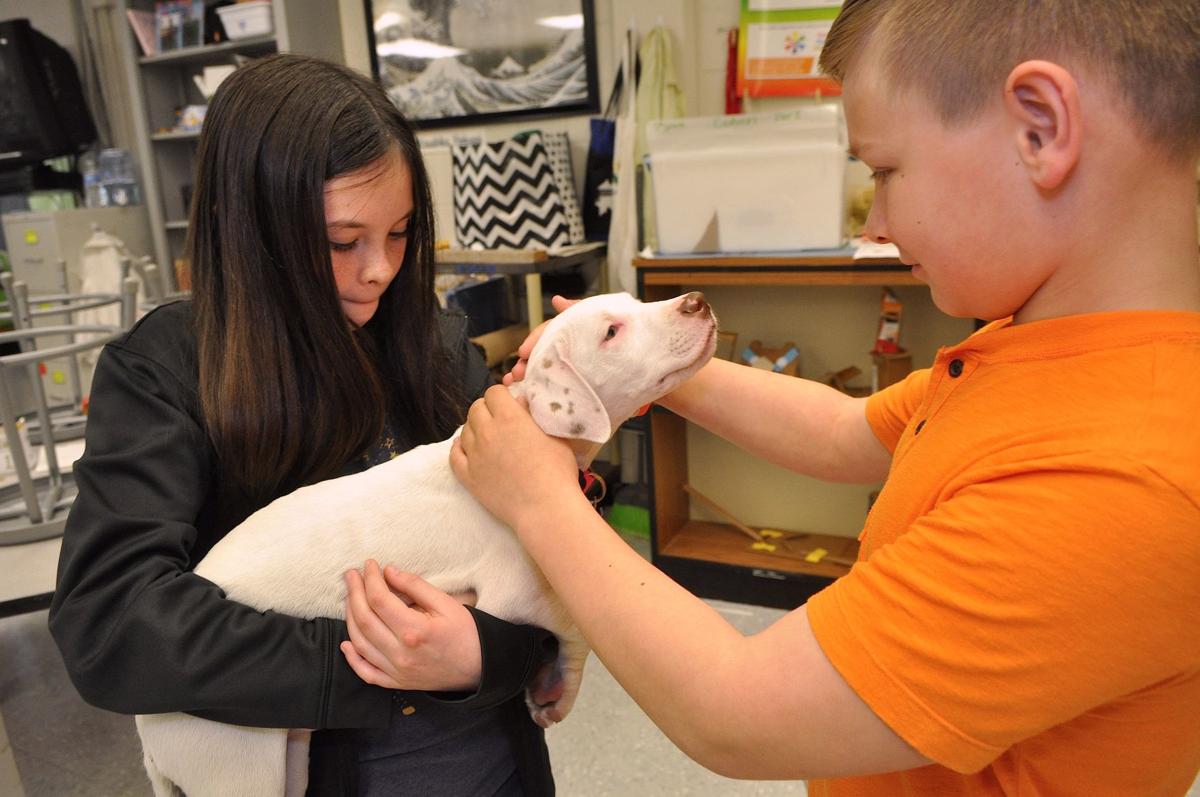 Morehead City Elementary School students, from left, Marlena Marson and Jude Golightly have a special moment with Fia, a homeless puppy available for adoption at the County Humane Society Animal Shelter in Newport, during SPLASH Day, an event for students to learn more about the county’s history and agriculture science. The event was held Thursday at the school. (Cheryl Burke photo) 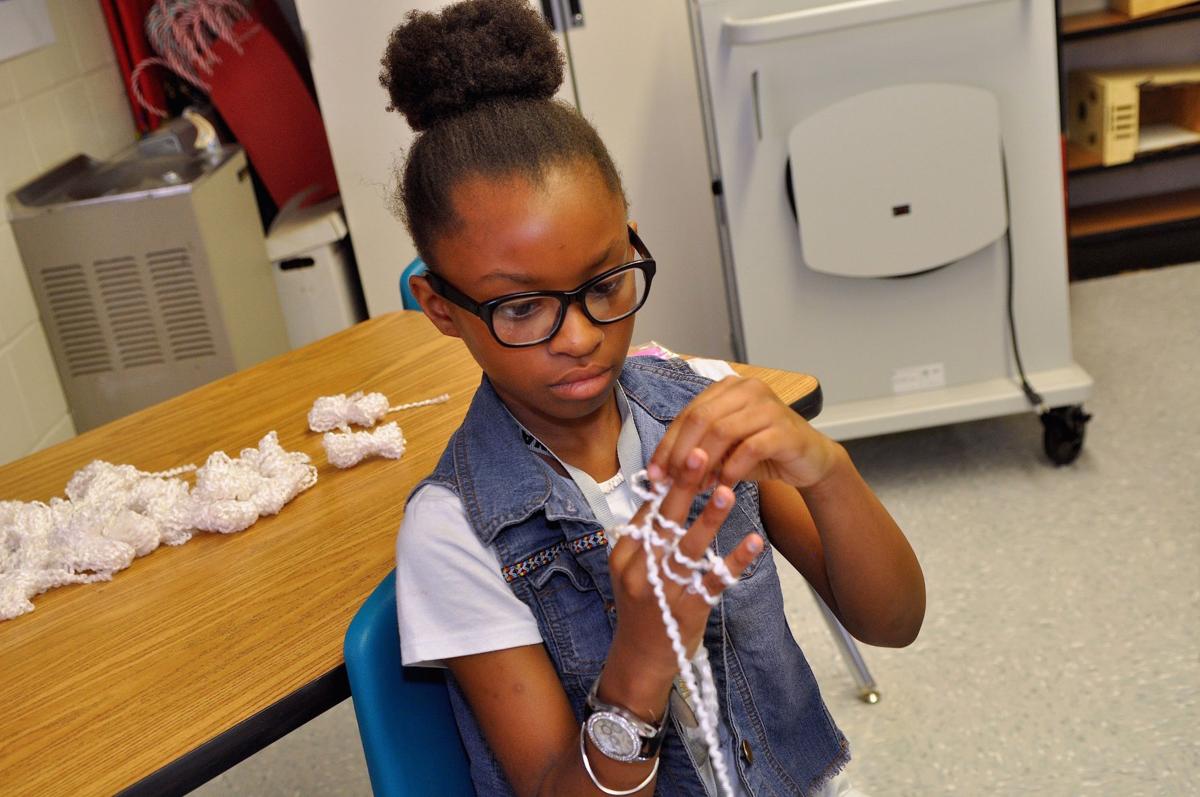 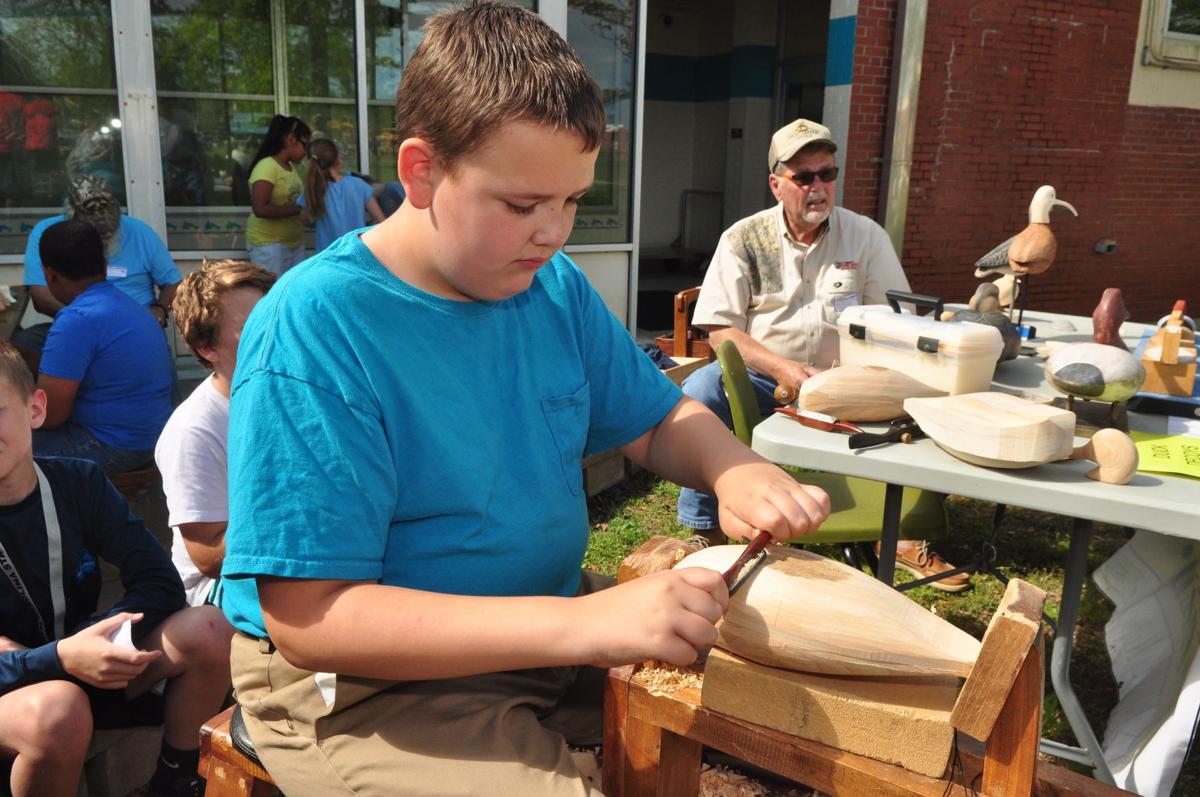 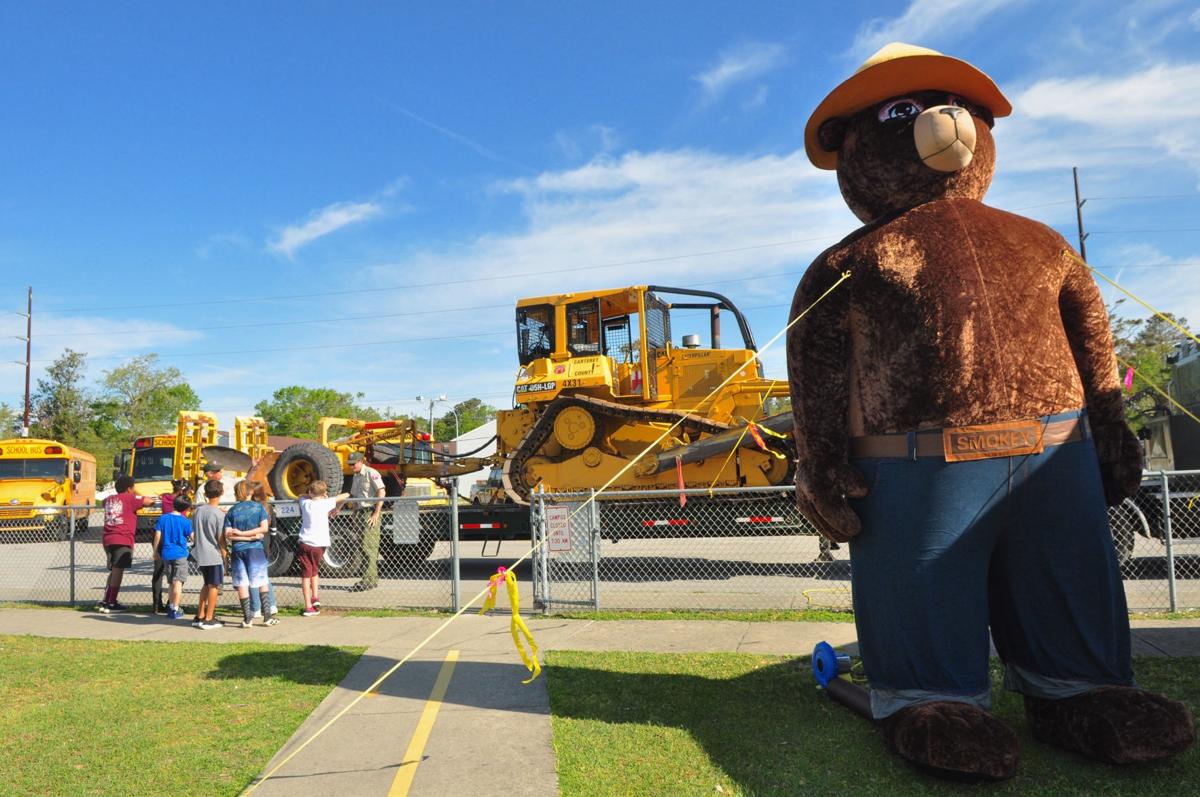 Morehead City Elementary School students, from left, Marlena Marson and Jude Golightly have a special moment with Fia, a homeless puppy available for adoption at the County Humane Society Animal Shelter in Newport, during SPLASH Day, an event for students to learn more about the county’s history and agriculture science. The event was held Thursday at the school. (Cheryl Burke photo)

Students rotated through 24 learning stations that featured a variety of volunteers and professionals who use ag science and history to serve residents, including their pets.

It was all part of SPLASH Day, with the acronym standing for Students Personalized Learning in Agriculture Science & History.

MCES fourth-grade teacher LeighAnn Whitehead said this was the third year she has organized the event to help students learn more about the county’s rich history and agriculture science.

“When I came here it seemed like there was a deficit in what students knew about the agriculture and history of the county,” Ms. Whitehead said. “It’s hard to take students places now because of budget shortfalls, so I thought why not bring the people here.”

One of the most popular stations was presented by Protectors of Homeless Pets of Carteret County, a nonprofit animal welfare group that helps homeless animals and pet owners who can’t afford to pay for their pets’ medical needs and care.

The group’s president, Mary Metzler, brought a puppy that’s up for adoption at the County Humane Society Animal Shelter in Newport for students to snuggle while she shared two important ways to reduce the county’s homeless pet population.

“Make sure people get their cats and dogs spayed and neutered,” Ms. Metzler said. “You can also adopt a homeless animal from the shelter instead of buying one from a pet store.”

Ms. Metzler said her group helps the animal shelter by paying for some of the pets to get spayed and neutered. They also provide funds to the shelter for medications and other surgeries.

Student Marlena Marson said she enjoyed the station because she cares about animals.

Another popular station was decoy carving, presented by the Core Sound Decoy Carvers Guild. Several of the carvers had samples of their work and allowed students to try their hand at carving.

Guild carver Walter Gaskill said he enjoys working with students because it can help create a new generation of carvers to keep the tradition alive.

“We want to get young people interested in carving and woodworking. During the summer we try to bring students in to let them try their hand at carving,” Mr. Gaskill said. “Many times they discover it might be something they’d like to do later on in life.”

At another station, students learned about the N.C. Forest Service from rangers, who brought equipment and gear used when fighting forest fires. They even brought a large inflatable of Smokey the Bear, the mascot used to spread the word about fire prevention.

Carteret County Ranger Brent Toler said as well as teaching students the importance of preventing forest fires, he hoped the day sparked an interest in some to pursue a forestry career.

“Fire control is our main purpose, but we do a lot of other things like helping people with timber management and insect and disease control,” Mr. Toler said.

Fourth-grader Channing Easton said he might consider a career in the forestry service.

“I like to be outside and enjoy nature,” Channing said. “It just sounds fun.”