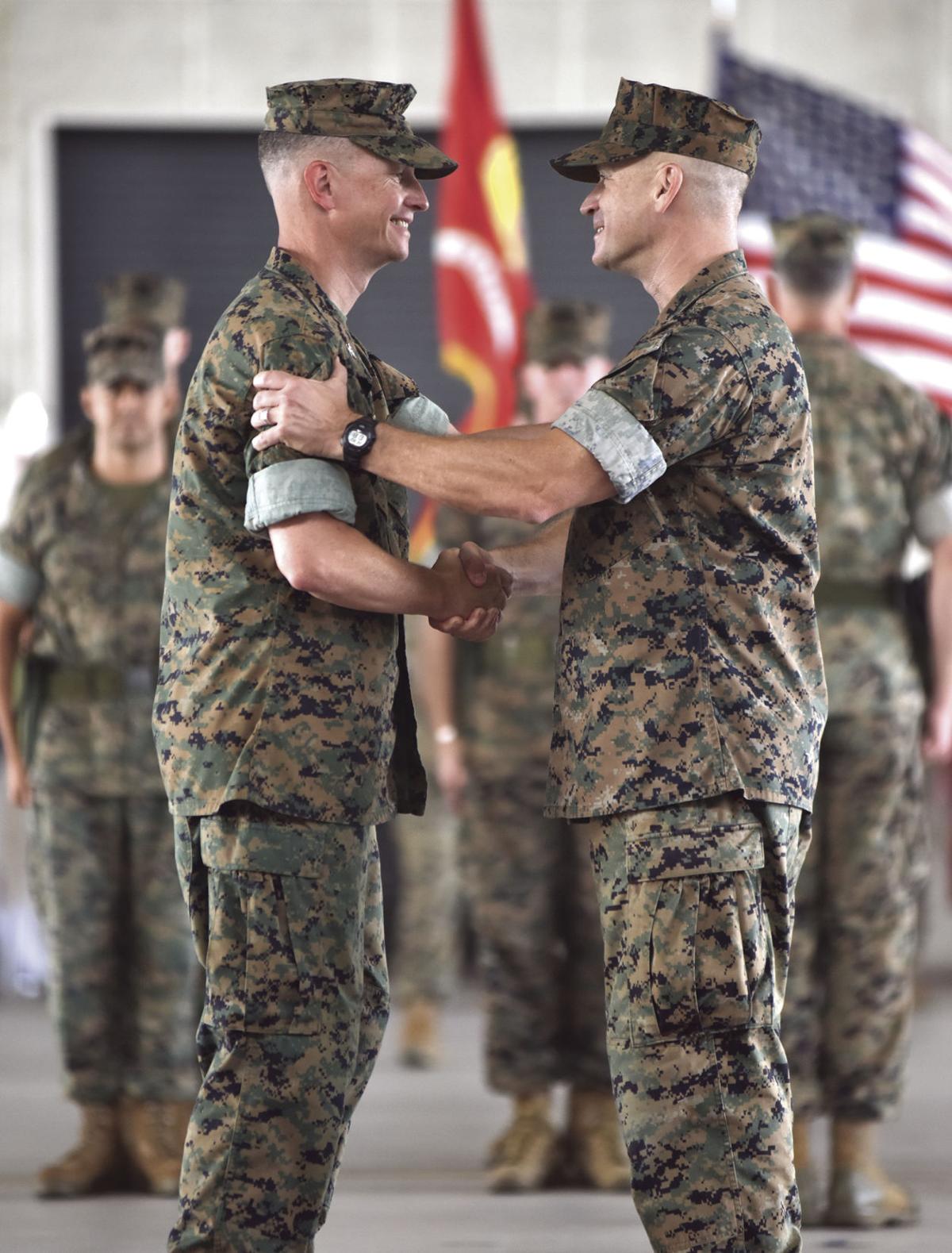 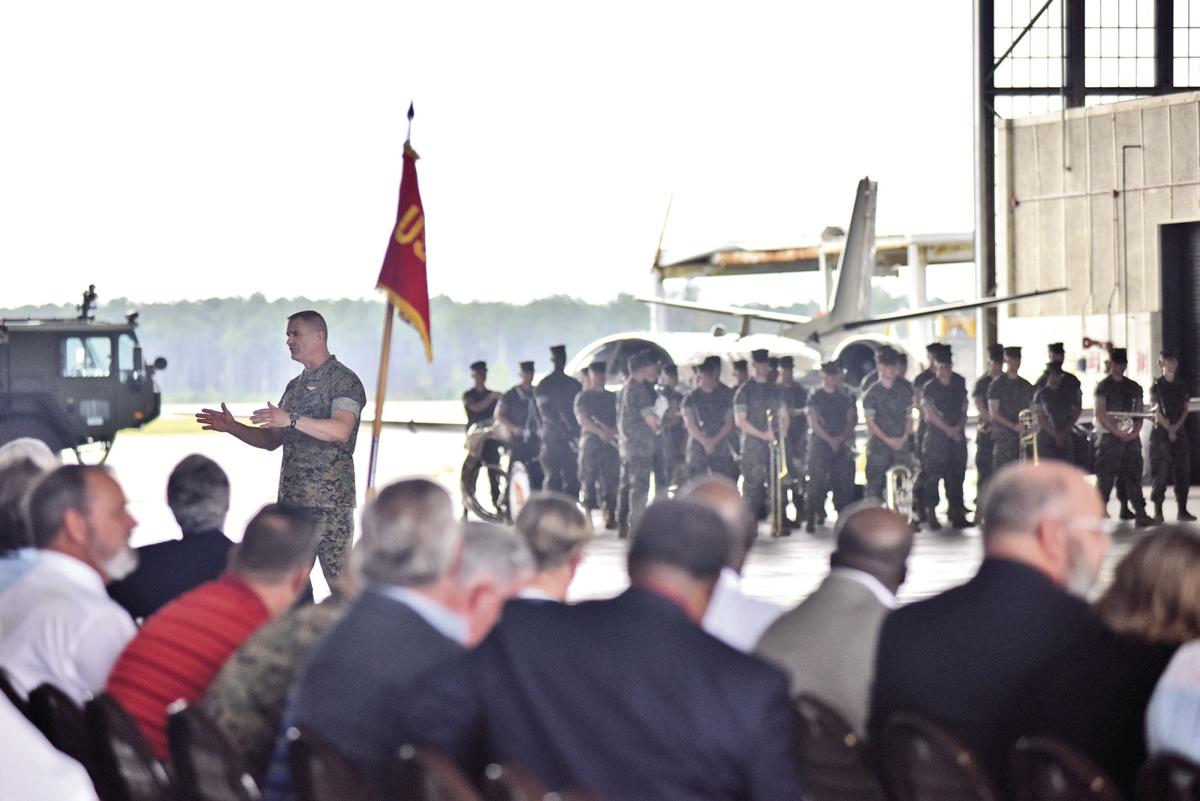 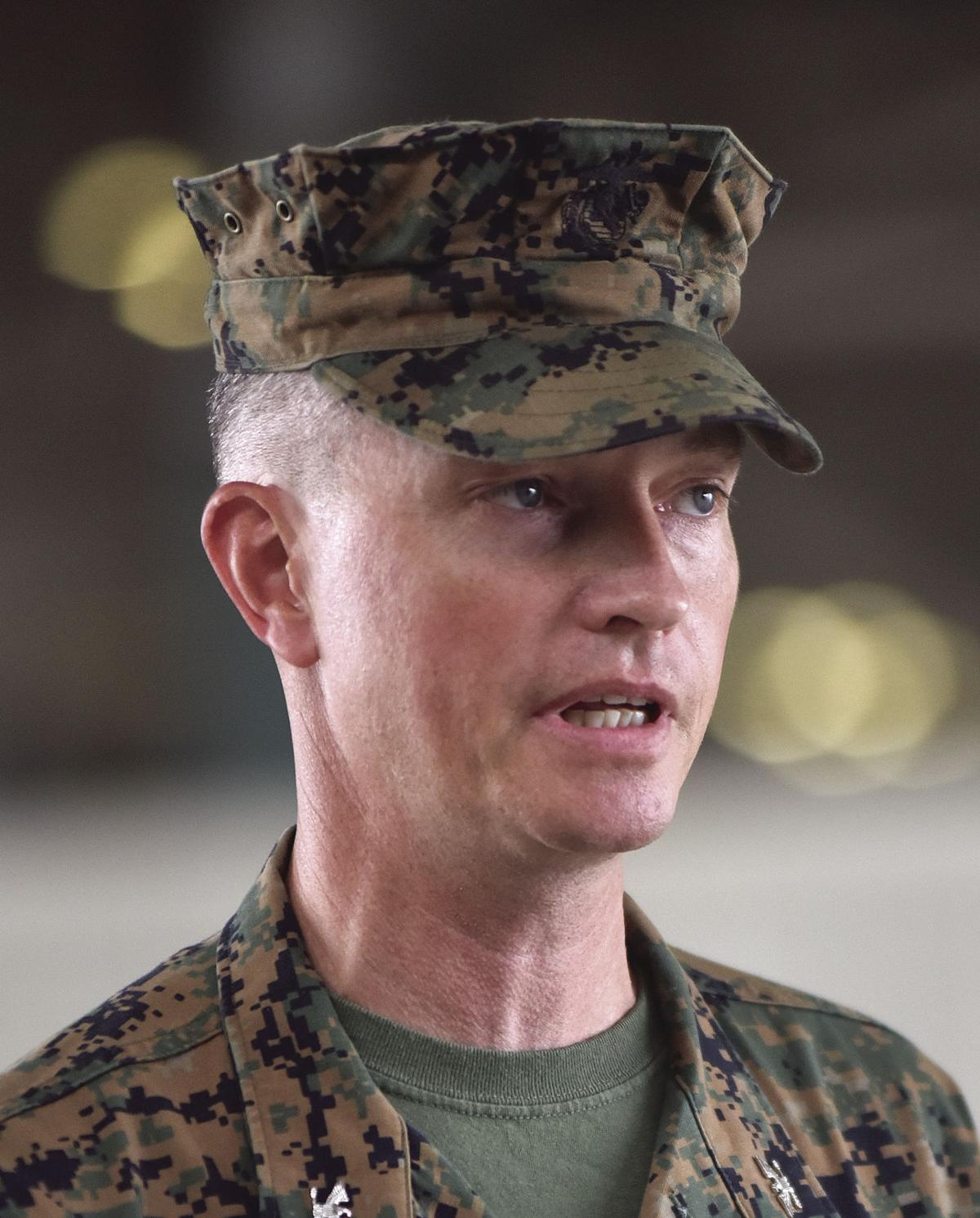 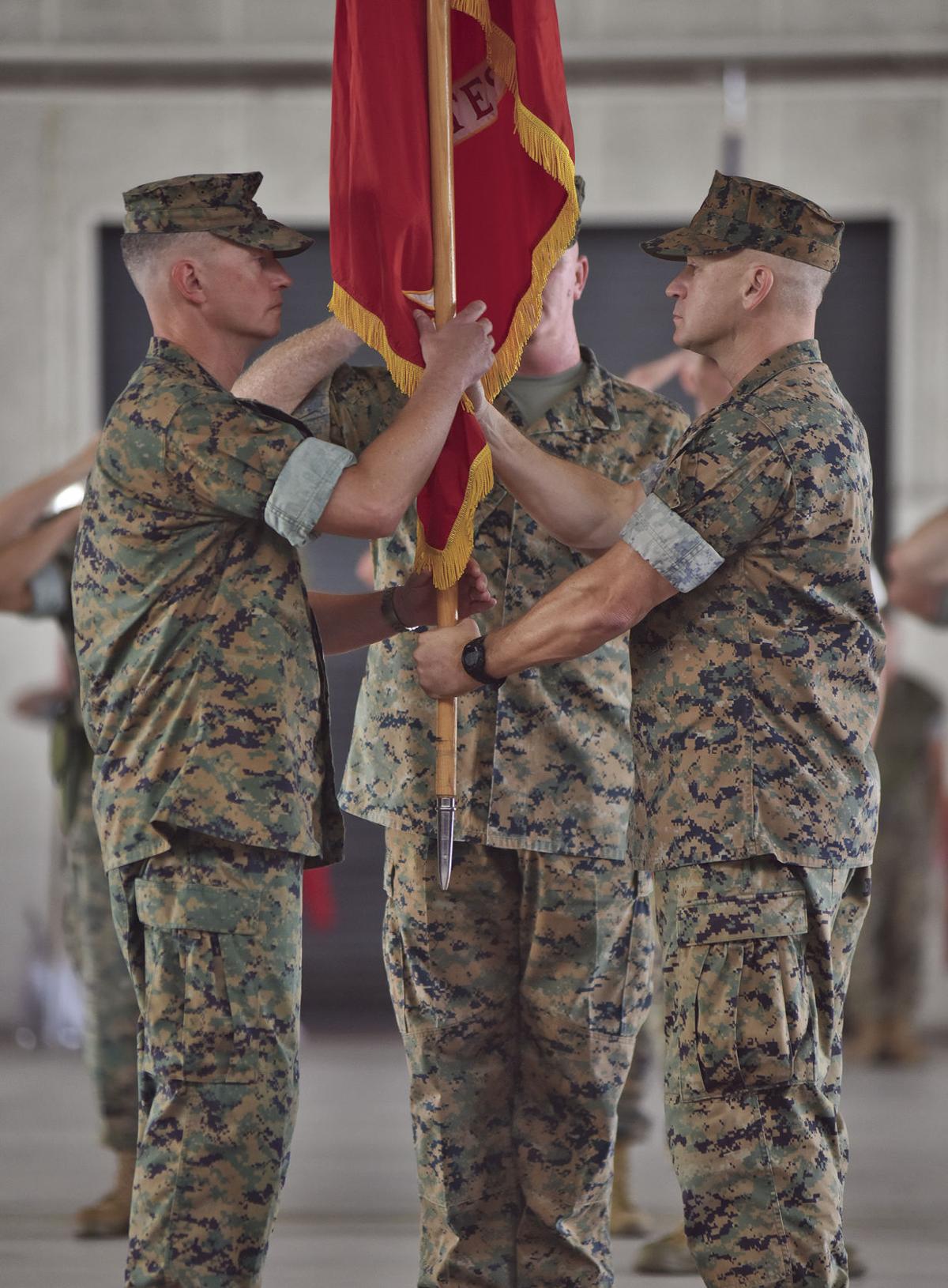 HAVELOCK — Among a large crowd of military and civic leaders, as well as local businesses and civilians, Col. Todd Ferry passed the helm of Marine Corps Air Station Cherry Point to Col. Mikel Huber during a change of command ceremony Friday.

During the ceremony, commanding general of the 2nd Marine Aircraft Wing Maj. Gen. Karsten Heckl spoke to the crowd of Col. Ferry’s dedication during his time as commanding officer.

“We’ve got more civic and local community leaders here than I can ever begin to name,” Maj. Gen. Heckl said. “It’s a testament to two things, No. 1, your performance here, your tenure here for the last three years, well done. And No. 2 and more importantly, I think for Marines it’s not about us, it’s about the command, it’s about the unit. That’s the testament for what this command means, for the unit and the community.”

Col. Ferry has served as the air station’s commanding officer since July 28, 2016.

According to information released by the air station, Col. Ferry demonstrated executive leadership that enhanced Cherry Point’s reputation as the primary hub of East Coast Marine Corps aviation, leading the transition for basing the F-35 Joint Strike Fighter there.

He was active through outreach and partnerships with community leaders that broadened public awareness of Marine operations and strengthened quality of life for the population of more than 41,000 active duty, civilian, reserve, retired military and family members, the organization said. His relationship with community leaders enabled Cherry Point to transition to support the U.S. Department of Homeland Security’s rescue and recovery efforts throughout the mid-Atlantic region in the aftermath of Hurricane Florence.

Friday’s ceremony included performances by the 2nd Marine Aircraft Wing Band and the transfer of the colors.

The transfer of the colors symbolizes the relinquishment of responsibility, authority and accountability for command by the outgoing commander. The acceptance of colors by the incoming commanding officer confirms a commitment to the Marines, sailors and civilians the position serves.

Col. Ferry thanked the crowd and his family for attending and said he valued his time as commanding officer.

“I came here three years ago, and it was the 75th anniversary of Cherry Point,” he said. “The heart of this air station is the 2nd Marine Aircraft Wing. That’s what makes it go, but the soul is the community.”

He spoke of people who have been involved with the base from the beginning, all members of the community that make the air station function.

“The soul of the community is intertwined,” he said. “I truly understand what makes us able to go out and do what we do.”

Col. Ferry said he has moved 10 times during his military career, and things that make each move so special are the memories of the relationships he forms.

“Relationships are the most important thing you take away,” he said. “First and foremost, I thank you for the relationship I’ve had with the commanding generals ... it’s been phenomenal, and I’ve been blessed to serve with each of those who’ve come and gone.”

In his closing remarks, Col. Ferry told the crowd when he took over command of the air station, his picture was displayed all over base.

When he prepared to pass the helm, his picture was removed and changed from a color picture to a black and white headshot and displayed with previous commanding officers’ portraits in the headquarters building.

He said previous commanding officers’ pictures were displayed, and it was like looking at a group of ghosts.

“What does that mean for your legacy and stuff like that?” he said. “When you describe leaders, you’re either an ancestor or a ghost. Ghosts come back to haunt us. Ancestors in the Marine Corps are good. I hope that when I walk off this stage and they put my face up there, it is my hope and prayer that I’ve been a good ancestor.”

Col. Ferry will transfer to serve as the deputy commander for Marine Corps Installations East-Marine Corps Base Camp Lejeune.

Col. Huber currently serves as the 2nd Marine Aircraft Wing assistant chief of staff for operations at Cherry Point. He is an AV-8B Harrier pilot and has completed multiple assignments at Cherry Point throughout his 26-year career.

Col. Huber may have big shoes to fill, but he is ready to take on the task.

“Today, to assume command of this air station is a tremendous honor,” Col. Huber said. To the Marines, sailors and civilians, our actions together will speak far louder than my words, so let’s get after it.”

As air station commander, Col. Huber is responsible for the primary air station complex in Havelock, as well as multiple outlying and auxiliary landing fields and bombing ranges in Carteret, Craven, Jones and Pamlico counties.

He is also responsible for Cherry Point’s air traffic control services that cover more than 9,000 square miles of airspace for military, civil and commercial air traffic in the region.

Now if they can only stay sober, unlike the previous commander relieved by Col. Ferry.